Russia is preparing false flag provocations: signs of the Russian PSYOP involving UR-77 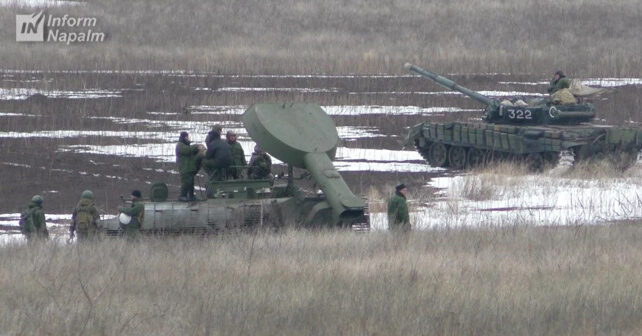 Volunteers of InformNapalm international intelligence community have spotted signs of a preparatory psychological operation (PSYOP) of the Russian Federation in the Donbas, which may precede a false flag offensive. Read more below in this article.

Over the past week, Russian military propaganda telegram channels have been particularly active in spreading fake reports alleging that Armed Forces of Ukraine have been accumulating UR-77 Meteorit mine-sweeping systems in the area of Mariupol. Such messages were presented as “signs of preparation for an offensive by the Armed Forces of Ukraine.” Thus, from the evening of February 13 and the morning of February 14, with reference to a report by Igor Girkin, a number of Russian information outlets began to actively circulate fake news stating that “the Armed Forces of Ukraine have already carried out demining near the towns of Kominternove and Sakhanka and are preparing for an offensive” (archive 1, archive 2). 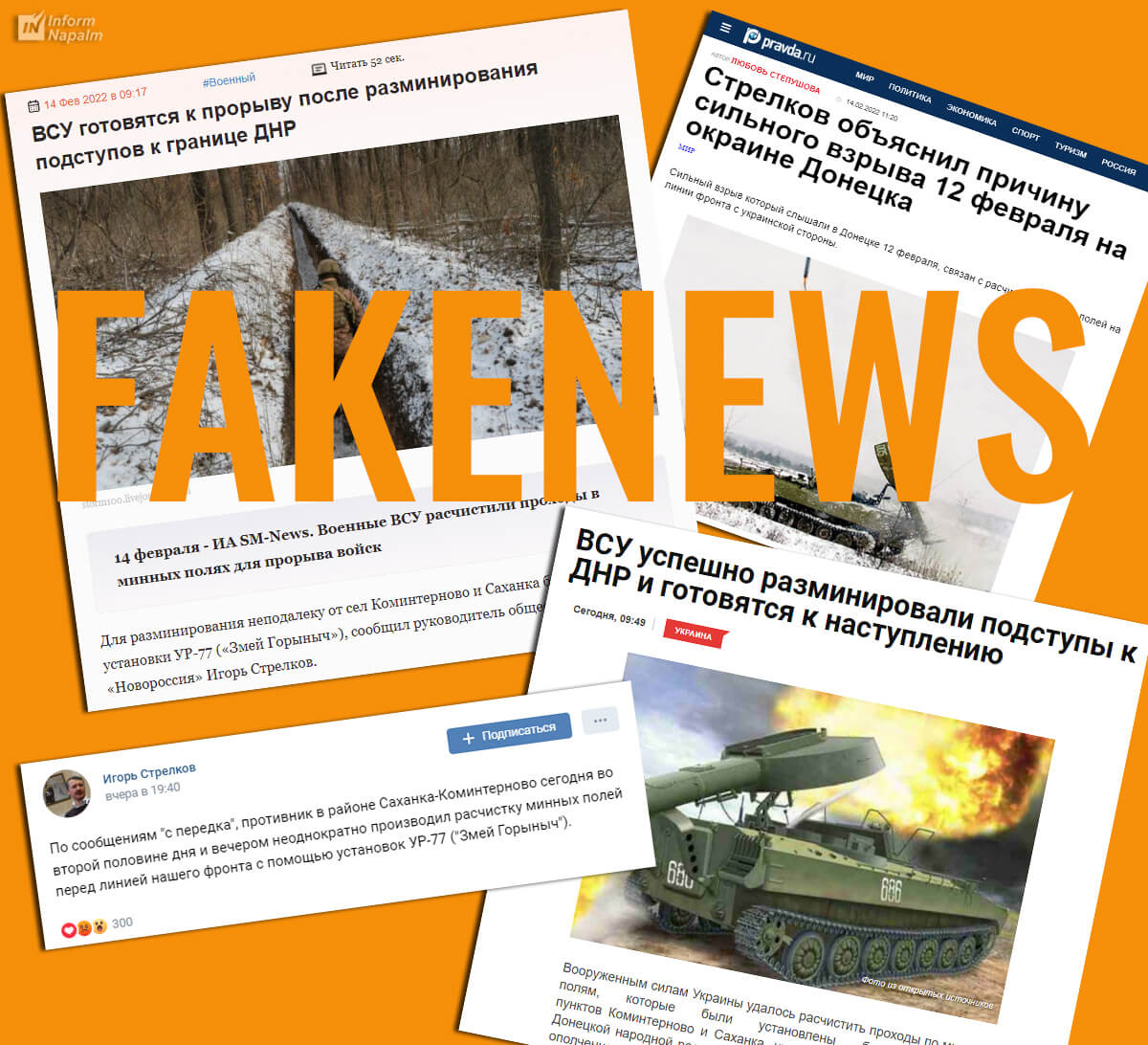 This sequence of disinformation efforts fits an established pattern of Russian PSYOPS, which may be a preparatory stage for a false flag operation aimed to accuse Ukraine of escalating hostilities.
It is noteworthy that the towns of Kominternove and Sakhanka are effectively under the control of the Russian occupying forces in the Donbas, and the Armed Forces of Ukraine cannot carry out any “mine clearance” there. At the same time, such option is available to the Russians. In the course of its OSINT investigations, InformNapalm has repeatedly spotted UR-77 Meteorit systems in service with the Russian occupation forces in the Donetsk Oblast. These systems were seen at the training grounds along with other military hardware of the Russian occupying forces, and were also spotted hidden in residential areas, thereby endangering civilians. 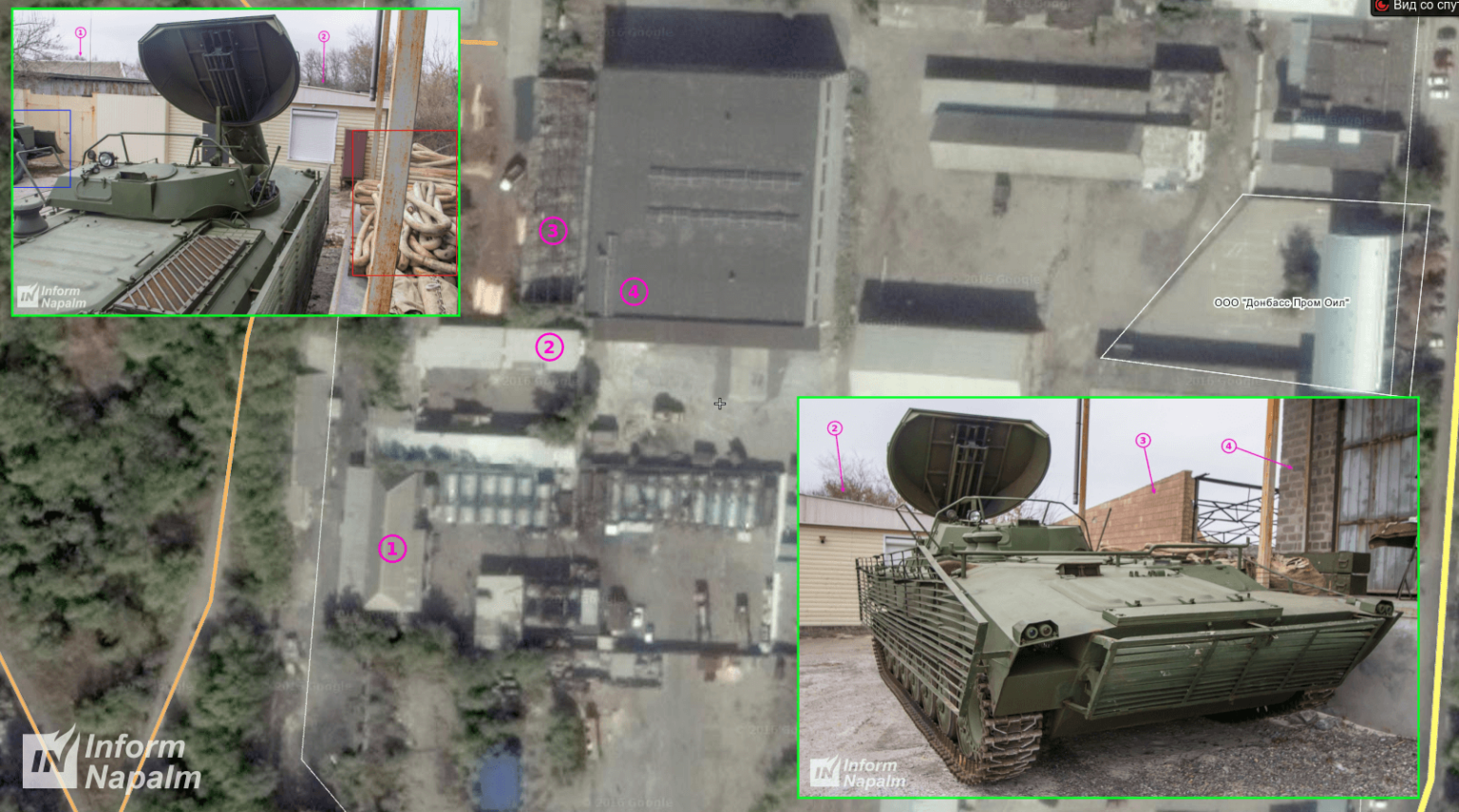 It is known that Russian Armed Forces used the UR-77 not only for its intended purpose of mine clearance, but also to target manpower in fortified ruins. Such use of these machines by the Russian Army was documented in the Second Chechen campaign, and at the storming of the Donetsk airport in the Donbas. UR-77 systems were also used in Syria in Jobar district of Damascus. Ironically, the use of the UR-77 in the Second Chechen War incurred significant losses for the Russian army. So, on February 25, 1995, the Russians mistakenly struck their own forces with a UR-77 charge killing 28 military men. And in 2019, militants of the Russian hybrid army in the Donbas used a UR-83P mine sweeping system against Ukrainian defenders in reckless disregard to the lives of civilians. 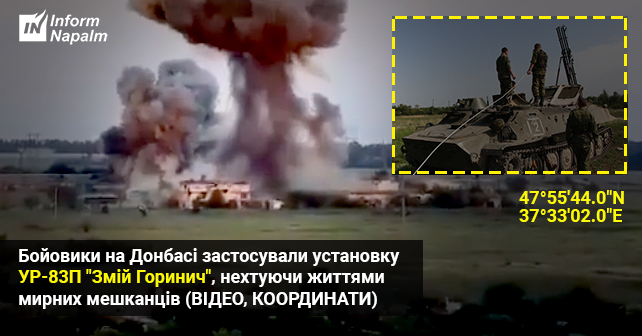 Analysts of InformNapalm suggest that this active fake reports campaign about Ukrainian Armed Forces carrying off mine clearing operations with UR-77 in the territories controlled by the Russian occupation forces may be an element of an information and psychological operation. This operation may be a preparatory step for an escalation, whereas the Russians, with their hybrid forces, can prepare their own offensive in the area south of Dokuchaevsk to gain access to the railway line and highway running between Mariupol and Donetsk. This offensive could be presented not as an outright attack, but as a “counterattack”. The aim of such an offensive would be semi-encirclement of the city of Mariupol in order to force Ukraine to the next agreements, which could be labeled “Minsk-3”. In the view of the Russian military command and political leadership, such a format of a false flag operation involving only hybrid forces could help avoid another package of painful sanctions, as the international community may not see it as essential, expecting a big war and a full-scale invasion.

At the same time, we should not rule out that such actions by the Russian Federation could be carried out simultaneously with other special operations and could be elements of a larger operation or elements of the “small cuts” tactics.

The illustrative title photo in this publication has been taken from materials about numerous sightings of the UR-77 in service with the hybrid Russian occupation forces in the Donbas.

One Response to “Russia is preparing false flag provocations: signs of the Russian PSYOP involving UR-77”