For the First Time in Six Years, Twitter Blocked All Official Accounts of the InformNapalm International Volunteer Community 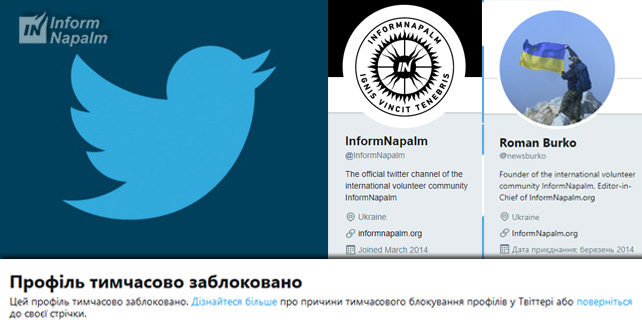 We would like to inform our reader that for the first time in 6 years, all official accounts of the InformNapalm international volunteer community – in Ukrainian as well as in foreign languages, – and also the account of the InformNapalm founder and the InformNapalm site’s Editor-in-Chief, Roman Burko, were simultaneously blocked by Twitter without any explanation.

This is likely to be a result of a massive attack from the Russian Federation. The accounts were blocked, all at once, right after we had sent out our tweet that contained some important facts about the presence of modern Russian military equipment in the Donbas. That tweet was a comprehensive report of data on geographical location of the military equipment from Russia found in the Luhansk region of Ukraine, with aerial photos and identification numbers.

Also, some strange messages were noticed, sent from Facebook admins. These messages alluded to a possible blockade of InformNapalm’s publications. It looked like a crash in the social network systems, which could have been provoked by malicious trolling from Russia.

Here is what Roman Burko wrote about this:

“Attention, friends. A powerful attack on my accounts has been launched.

For the first time in 6 years of war, Twitter blocked my account, for no apparent reason and with no explanation. The only thing that comes to mind is that it is a mighty assault of Russian trolls caused by this last tweet about the Russian radio-electronics-equipped military vehicles in the Donbas (screenshot attached).

It does look like the Russians have already mastered the corona virus-induced panic as a means of blocking those social networks users who present REAL and IMPORTANT proofs of the Russian aggression”.

The Russian Trolls Have Adapted to New Mechanisms of Blocking

Also, we are of the opinion that the Russian troll factories have adapted to using the mechanisms of account blocking designed during the international campaign against fake news about COVID19. They use these mechanisms for a massive blocking of every person who unveils the truth about the Russian military aggression.

It is also not excluded that such an unprecedented activity of the Russian trolls is explained by the desire of the leadership of the Russian Federation to obscure any new evidence of their country’s aggression in the Donbas. This evidence stands on the way of Kremlin’s plans to demand the lifting of international sanctions in the midst of an international crisis caused by the coronavirus pandemic.

We urge our readers to take into consideration that the Russian Federation is trying, with a growing aggressiveness, to isolate our volunteers’ community from sharing the open-source intelligence data through social networks. This is why we ask you to add our site to your bookmarks, to check regularly our updates, and to help share our publications by all means available to you: in blogs, through Internet pages and groups, through publications in media etc.

Usually, new materials from us at first are published in Ukrainian in the НОВИНИ (News) section. Then we add translations of these materials into other languages. To trace how new translations appear, use the icons under the article’s title on our site.

This is outrageous decision by @Twitter . It’s irresponsible to suspend @informNapalm As former Member of European Parliament I could rely on their information esp aboutwar in Donbas. They are working to find the truth and you should not stop their communication. @TwitterSupport https://t.co/qiKCRslaFp

HELP. I NEED SOMEBODY… to urge @TwitterSupport to reinstate these accounts > @InformNapalm @ua_informnapalm @en_informnapalm @newsburko @fr_informnapalm. It’s unheard of to get this level of joint suspension of so many accounts. It must indicated mass Russian troll reporting. pic.twitter.com/4bPqzN4QML

We are alarmed @Twitter accounts of our colleagues at Informnapalm were recently blocked with no explanation.

R.Burko, founder of Informnapalm, said it may have resulted from #Russian troll attacks due to publication about the presence of modern 🇷🇺 military equipment in Donbas. pic.twitter.com/rgMyDWzRgG

Staggeringly, #Twitter @Twitter suspended these accounts > @InformNapalm @ua_informnapalm @en_informnapalm@newsburko @fr_informnapalm. We can choose to shrug our shoulders & surrender Twitter to Russia’s trolls or pull together & ask @TwitterSupport to reinstate the accounts. pic.twitter.com/VH545PlhF7

We share concerns about suspending accounts of @InformNapalm, which seriously damages investigative reporting on war in #Ukraine. We call on @Twitter to provide explanation of this action. The right to receive objective information should not be violated ➡️https://t.co/ReajUJlW4T pic.twitter.com/xxh82TUfcu

No Responses to “For the First Time in Six Years, Twitter Blocked All Official Accounts of the InformNapalm International Volunteer Community”