The international volunteer community InformNapalm recently published the evidence  of the participation of sailors of the 184th Coastal Defense Brigade (military unit 90921) – a unit of the Russian Black Sea Fleet based in Novorossiysk – in the occupation of Crimea. That article proved to be popular among our Russian readers, and they posted numerous comments under the Russian language version of the report. Those comments demonstrate a whole spectrum of the Russian propaganda, from boasting and threats to the traditional claims of the “they are not there” type, challenging the existence of that brigade or the ship. This is why today we are going to name four more “they-are-not-there” serving at the Novorossiysk naval base. One day they will surely appear in front of the International Tribunal for their crimes.

We discovered a group photo of sailors who were all awarded with medals for the occupation of Crimea. The photo was published on the social network page that belongs to Ainur Salakhov, the sailor of SAS Povorino, born 25.06.1992 in the town of Naberezhnye Chelny, Russia, a graduate of Kama State Automechanical College.

One Salakhov’s friends commented under the picture, “I see the medal given for the return of Crimea”. Salakhov responded, “Yes, [we] participated in the events, after all”. 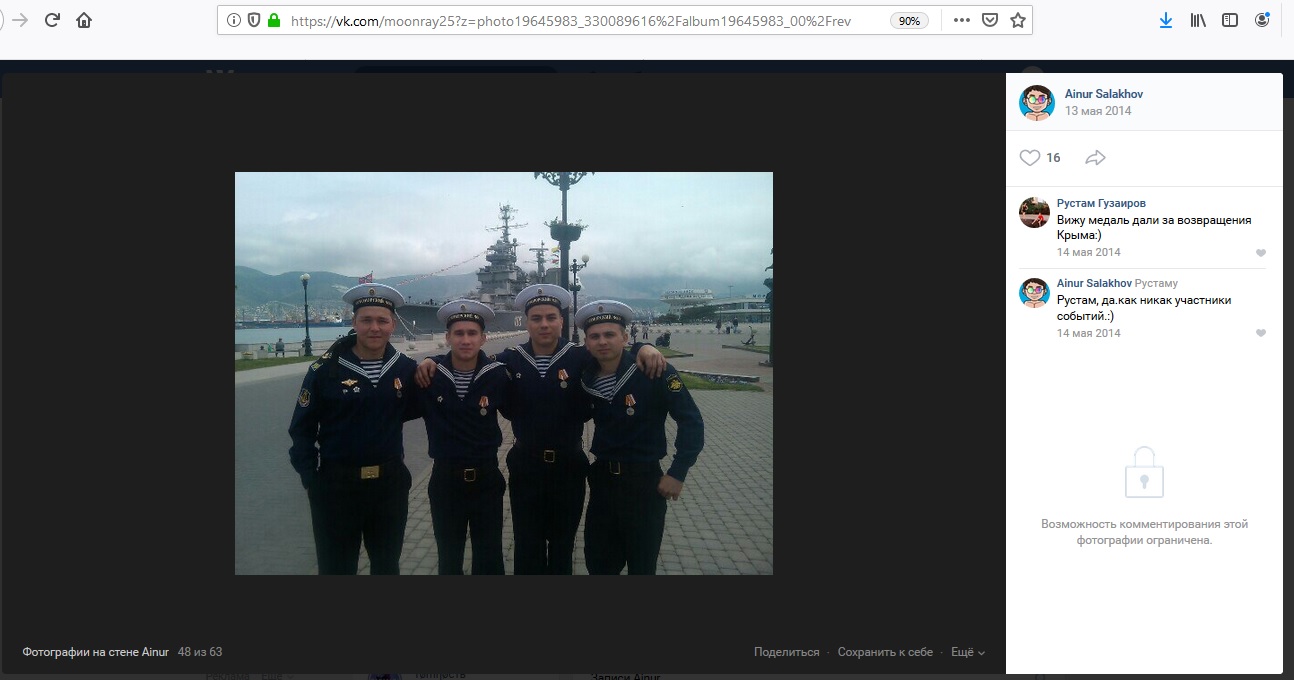 Ilnaz Gilfanov was born on 30.03.1993 in Kazan. Ilnaz is cautious, he clearly listens to the instructions of his commanders, therefore he did not publish evidence of his participation in the aggression against Ukraine. However, his colleagues provided evidence against him. He was identified in the group picture of Povorino sailors that were awarded the medals. In this picture he is the first on the left. 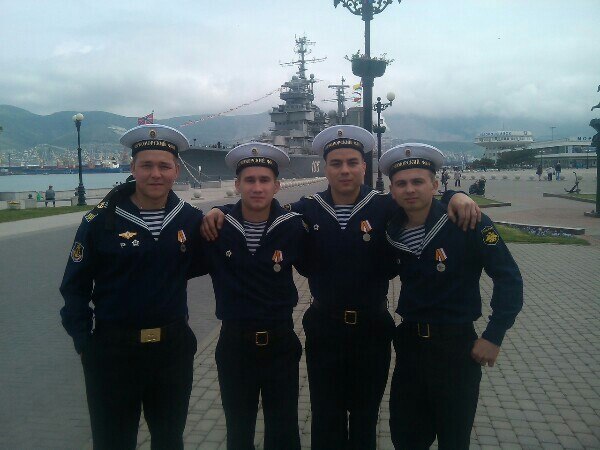 In his album Ilnaz published a photo of the flag of the Russian Navy with congratulations on the holiday. He also shared a video talking about SAS Povorino.

Adel Sibgatullin was born on 30.12.1988 in Kazan. He graduated from Kazan Federal University. 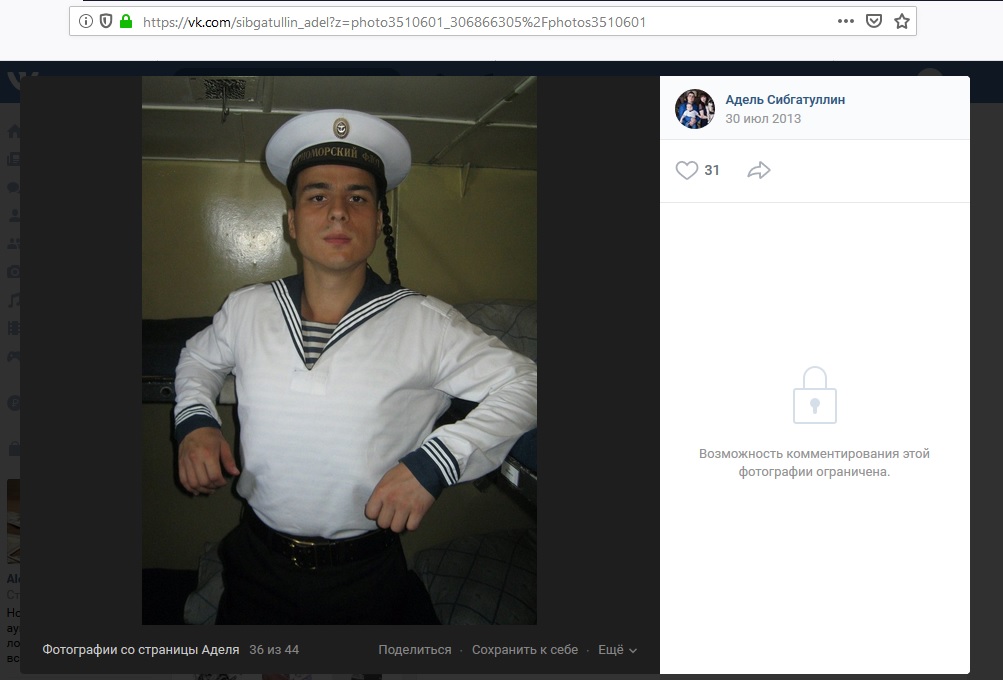 Adel did not publish photographic evidence of his participation in the aggression against Ukraine. However, he was identified in the group picture. His colleagues published evidence compromising him.

The fourth awardee in the group picture is Nikolay Yuryevich Borovik 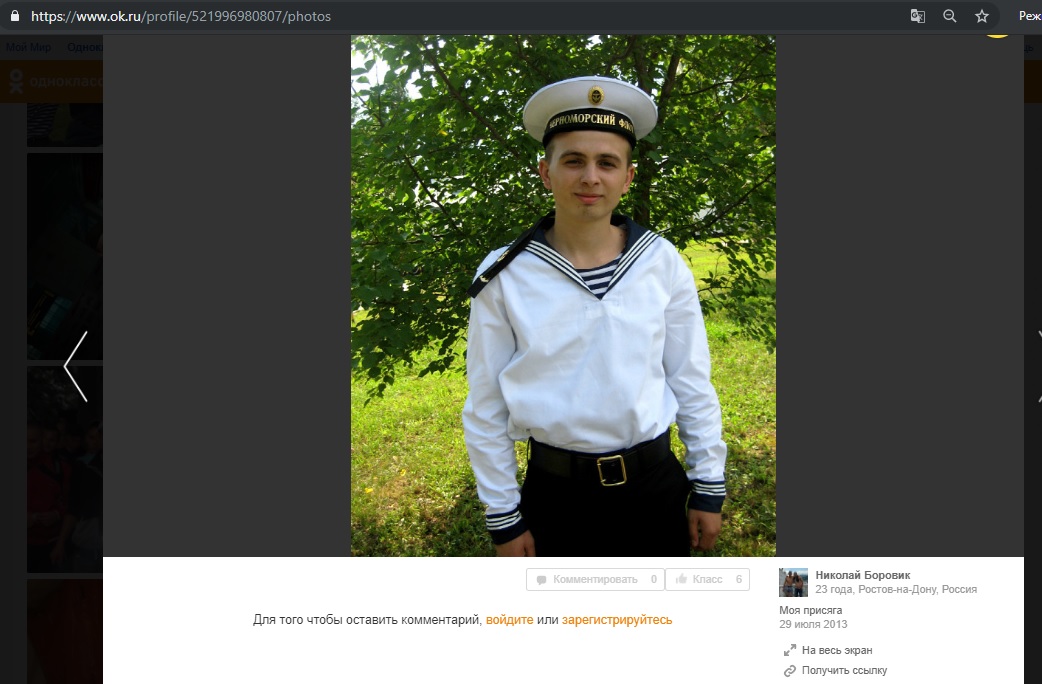 He was born on 21.06.1995. His social network page shows the place of birth – Rostov-on-Don. In 2013, he graduated from high school in the village of Lysogorka, Kuibyshev District, Rostov Oblast. His parents studied in the same school and still live in that village (https://archive.fo/62wG8, https://archive.fo/7DYPQ). His grandfather from the father’s side lives in the occupied Makiivka. The grandfather’s social network page shows the whole spectrum of Russian propaganda and fake news. He published a picture of his daughter hugging the terrorist Aleksandr Zakharchenko. The inscription under the picture says “[my] daughter at press-conference”.

The album of Nikolay Borovik has the same group picture of four Povorino sailors. In the picture he is on the right: 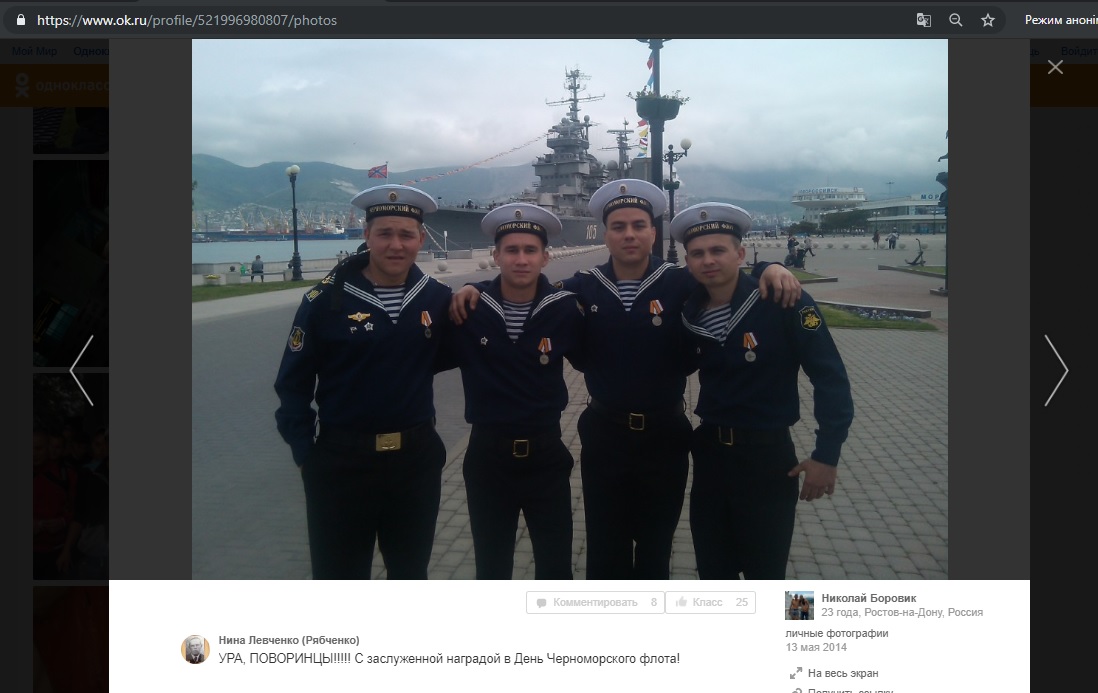 We have named four new Russian war criminals who should be charged by international tribunal.

Previously we published  pictures and names of commanders of the Novorossiysk naval base that coordinated the occupation of Crimea.

Russian aggression database includes all military units of the Russian Armed Forces that took part in the aggression against Ukraine, Georgia, and Syria. Their crimes were proved by volunteers of InformNapalm using OSINT methods.

Translated by Maksym Sviezhentsev. Distribution and reprint with reference to the source are welcome!
(Creative Commons — Attribution 4.0 International — CC BY 4.0) For notifications about InformNapalm investigations follow us on Facebook / Twitter / Telegram. Repost and share with friends!