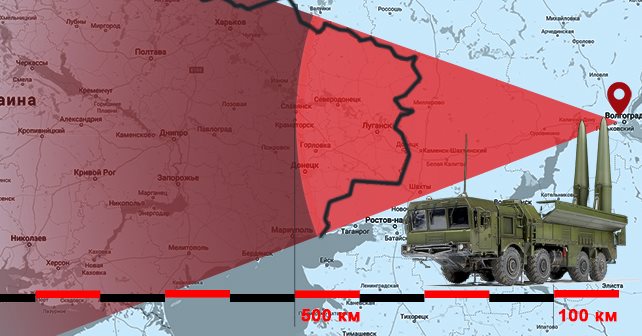 In the process of social network monitoring, the volunteers of the international intelligence community InformNapalm identified the movement of 3 Iskander-M (SS-26) launchers and 4 S-300 launchers, presumably S-300PMU2 (SA-20B Gargoyle), on January 23 in Volgograd, just 330 km from the Ukrainian border.

The video of the Russian military convoy was published by a local resident on Instagram with a comment: “I do not even know where they are going. Maybe to vote.”

According to specifications, the range of the Iskander-M ballistic missile is 500 km, which is the distance between Volgograd, Russia and Kramatorsk, Ukraine.

The anniversary of shelling of Kramatorsk

On February 10, 2015, Russian troops fired Smerch MLRS at military airfield and densely populated civilian districts of the city of Kramatorsk. As a result of the shelling, 17 people were killed, of whom 10 were civilians and 7 servicemen of the Armed Forces of Ukraine. 64 people were injured. The main military prosecutor’s office of Ukraine qualified this shelling as a terrorist act.

Preparing for the parade or hidden deployment for aggression?

We found reports in the regional Russian media announcing military parade in Volgograd to honor the 75th anniversary of the victory in the Battle of Stalingrad. They said that on February 2, 2018, the following military and special equipment will take part in the military parade on the “Square of the Fallen Fighters”: MLRS Tornado and Smerch, S-300 SAM, Pantsir anti-aircraft system, anti-aircraft missile system TOR-M1, T-90 tanks, self-propelled artillery guns MSTA-S, armored vehicles Tigr, and ballistic missiles Iskander-M.

InformNapalm volunteers previously discovered that almost all of these weapons and equipment were used in the war in the Donbas, with the only exception of the Iskander-M.

We hope that on the eve of the presidential election the Russian leadership will not cross another red line and will not use these types of weapons in its aggression against a neighboring state. However, this possibility should not be ignored, and Ukraine and the entire international community have to be ready for it.

In the future publications, InformNapalm will talk about the location of the permanent bases of the Russian ballistic missile launcher Iskander-M.

This publication was prepared by  Victory Krm  and Roman Burko specially for InformNapalm. Translated by Gek, edited by Max Alginin