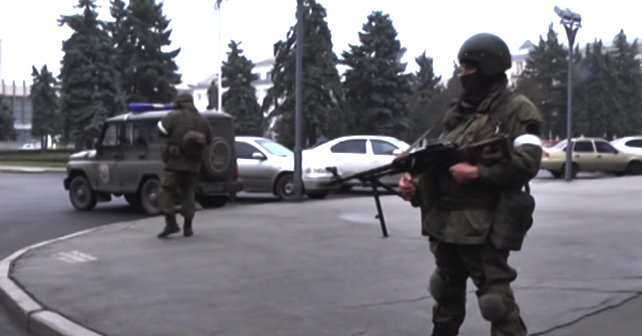 On November 21, a large number of armed and well-equipped militants in the Russian uniform without any identification marks, but wearing distinctive white identification armbands, cordoned off the building of the Interior Ministry in the occupied Luhansk.

The journalist of Radio Liberty Andrii Dikhtiarenko posted on his facebook page:

“In Luhansk, a BTR armored vehicle drove up to the Interior Ministry, the building was surrounded by armed people, some with portable grenade launchers. It seems that Kornet [Editor’s note: Igor Kornet, so-called Interior Minister of the Luhansk Peoples Republic (LPR), recently fired by the leader of the LPR Plotnitsky] decided to “appeal the court ruling” about his dismissal from the post of the minister. Now it is important that residents of neighboring houses are not harmed in the process of “filing the appeal”. These war games are happening in the heart of the city.”

There also are videos from the scene on the web:

Russian curators have coined the nickname “Jabba Hatta” for Plotnitsky. He belongs to the circle of the Kremlin-affiliated protégés installed by Main Intelligence Directorate (GRU) of the Russian Army, an organization which is often competing with the Russian Security Service (FSB) for spheres of influence in Donbas.

Military men in unmarked uniforms who cordoned off the buildings are either regular servicemen of the GRU of Russia or belong to Wagner private military company (PMC), which has participated in numerous eliminations of field commanders who were at odds with Igor Plotnitsky. InformNapalm volunteer intelligence community wrote about the connection of this PMC with the GRU in a special investigation:

Private Military Companies in Russia: Carrying Out Criminal Orders of the Kremlin