Medal count: OSINT analysis of real Russian losses for the first week of hostilities in Ukraine 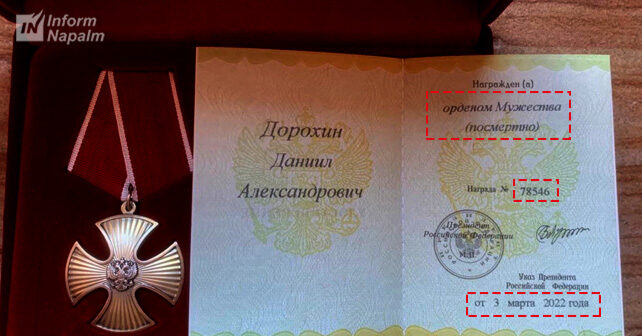 With the beginning of the active phase of hostilities against Ukraine on February 24, 2022, reports about funerals of Russian military men became a mainstay of the Russian regional and federal media. In the early days, there was complete silence in the Russian media space, and this is easily explained. In order to be buried, the first Russians killed in action had to be brought to Russia, properly documented and then delivered to the burial place – this normally takes several days. It is also known that the Russian Federation either does not want, or does not have time to take all its bodies. Logistical problems for transporting of filled body bags are the same in the Russian army as with the botched logistics of the advancing invasion forces. Therefore, in the Russian press, news reports about the dead Russians have been appearing with a lag of a week or even 2-3 weeks. Therefore the mass media are becoming aware of the losses of the first days of the full-scale war only now. In this publication, InformNapalm volunteer intelligence community demonstrates an example of OSINT investigation aiming to verify the casualty data of the Russian Armed Forces. We turn to the Russian “medal count” for helpful information about the body count. Read the details in our investigation.

Russian losses in the first week

So let’s go back to March 2nd. Back then Ukraine announced Russian losses at 5840 killed military men. Effectively, these were the losses of the Russians in the first week of the war.

In recent weeks, we have begun to analyze reports in the Russian regional press and social media. We’ve looked through hundreds of news stories about funerals, hundreds of hospital videos, and thousands of social media posts. What did we see?

Vanya, would you have a medal or an order?

We could trace clear decoration patterns for the Russian military men involved in the war with Ukraine. All those killed receive the Order of Courage posthumously. Sometimes gravely wounded senior officers and individual military officers with spectacular wins, also receive this order – but these are isolated cases. Basically, the Order of Courage is now issued posthumously.

Individual senior officers are awarded the star of the Hero of Russia for severe wounds or posthumously. So Denis Shishov, the commander of the 11th Air Assault Brigade, wounded during the assault on Kakhovka, became a “hero”. His “feat” took place on February 25, and the news about the award appeared only two weeks later. Let’s quote:

Indeed, only a person gravely wounded to the head would defend the Donbas near Kakhovka.

The commander of the 331st Kostroma Regiment of the Airborne Forces, Colonel Sergei Sukharev, who was killed in Ukraine, received the Star of the Hero posthumously.

Here is Shoigu in the hospital handing out awards:

Sometimes the wounded receive an Order of Courage, but for the most part, Russian soldiers earn only a basic medal for the wounds sustained.

Some awards are really ridiculous. For example, the governor of the Moscow Oblast presented to the wounded soldiers of the Russian Guard a regional badge with the pompous name “For Valor and Courage”. 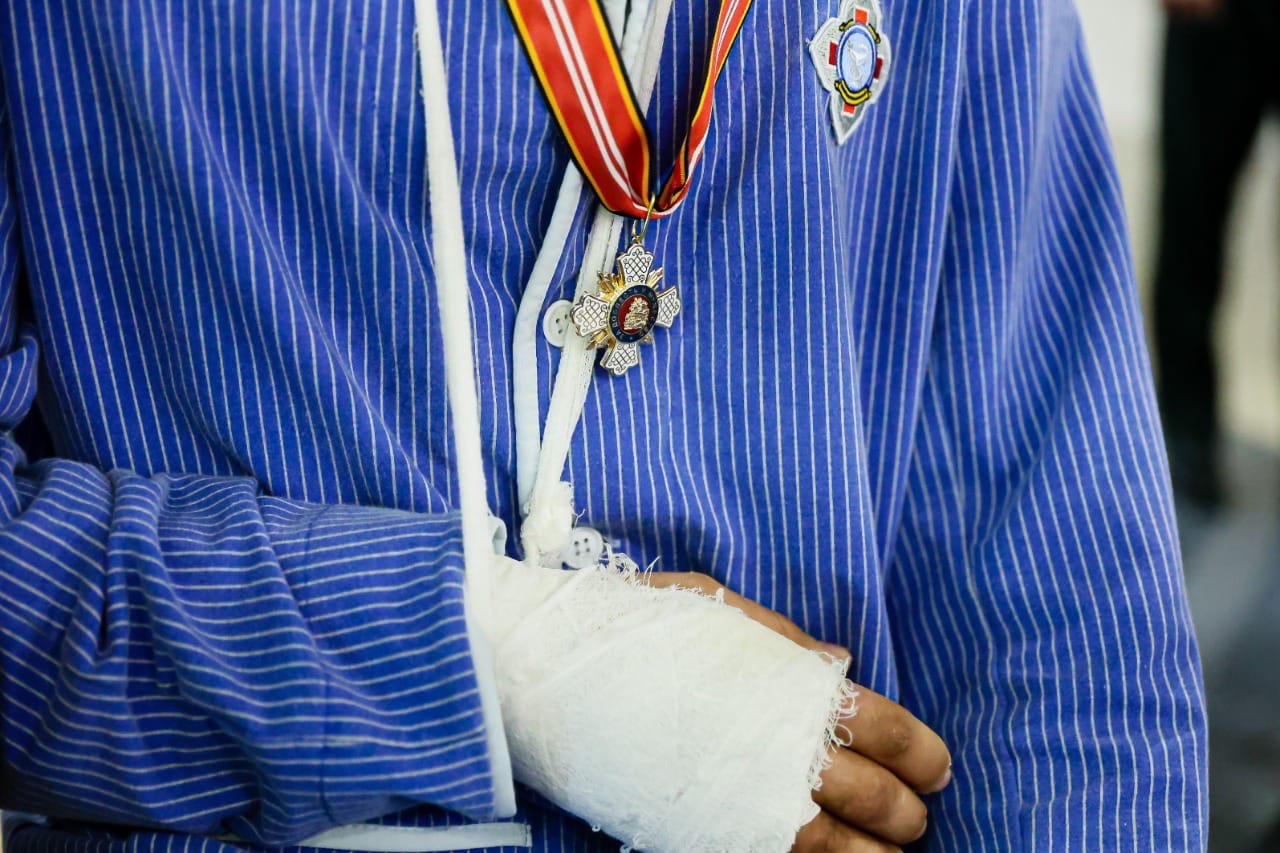 This is not a state or departmental award, just a colored badge with a ribbon from the hands of local authorities.

But how do we estimate the number of issued decorations? Some Russian soldiers and journalists post photos of decoration certificates showing the serial numbers of the awards and the day the award order was signed.

This is what a typical obituary of a Russian military man looks like after a tour of duty to Ukraine: 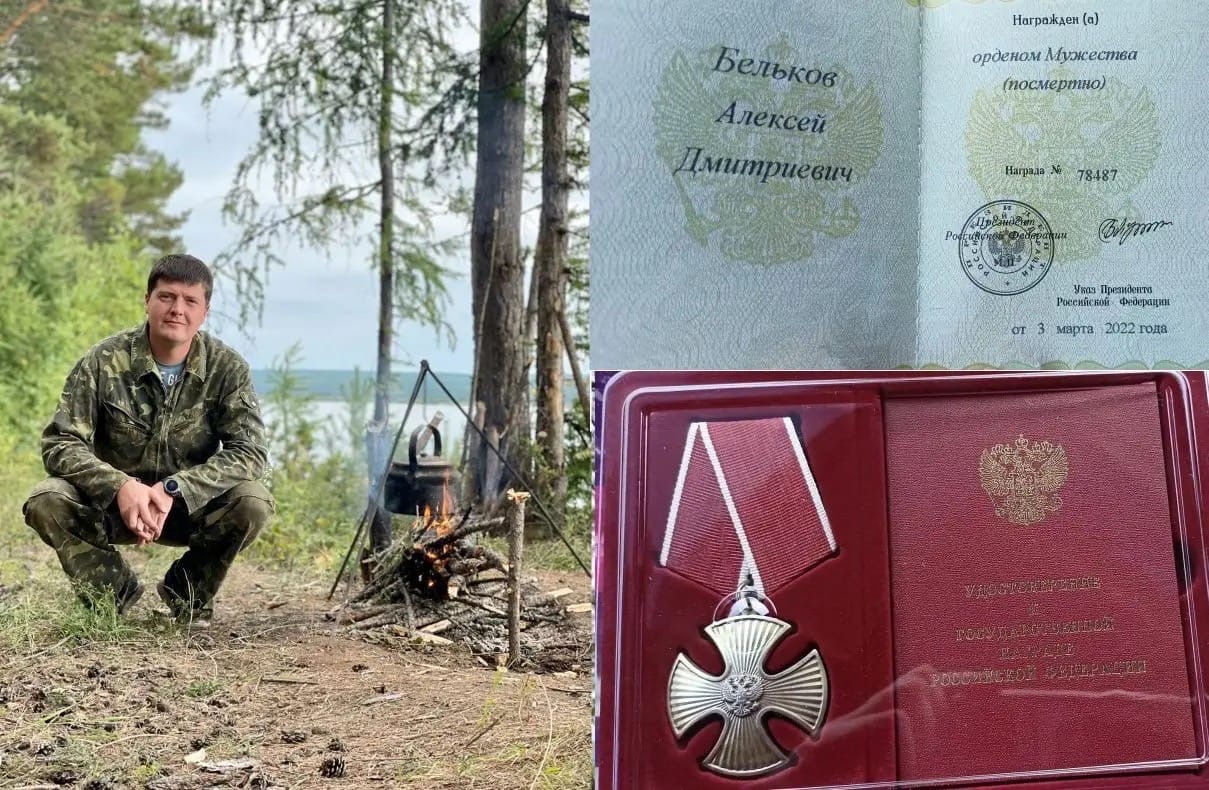 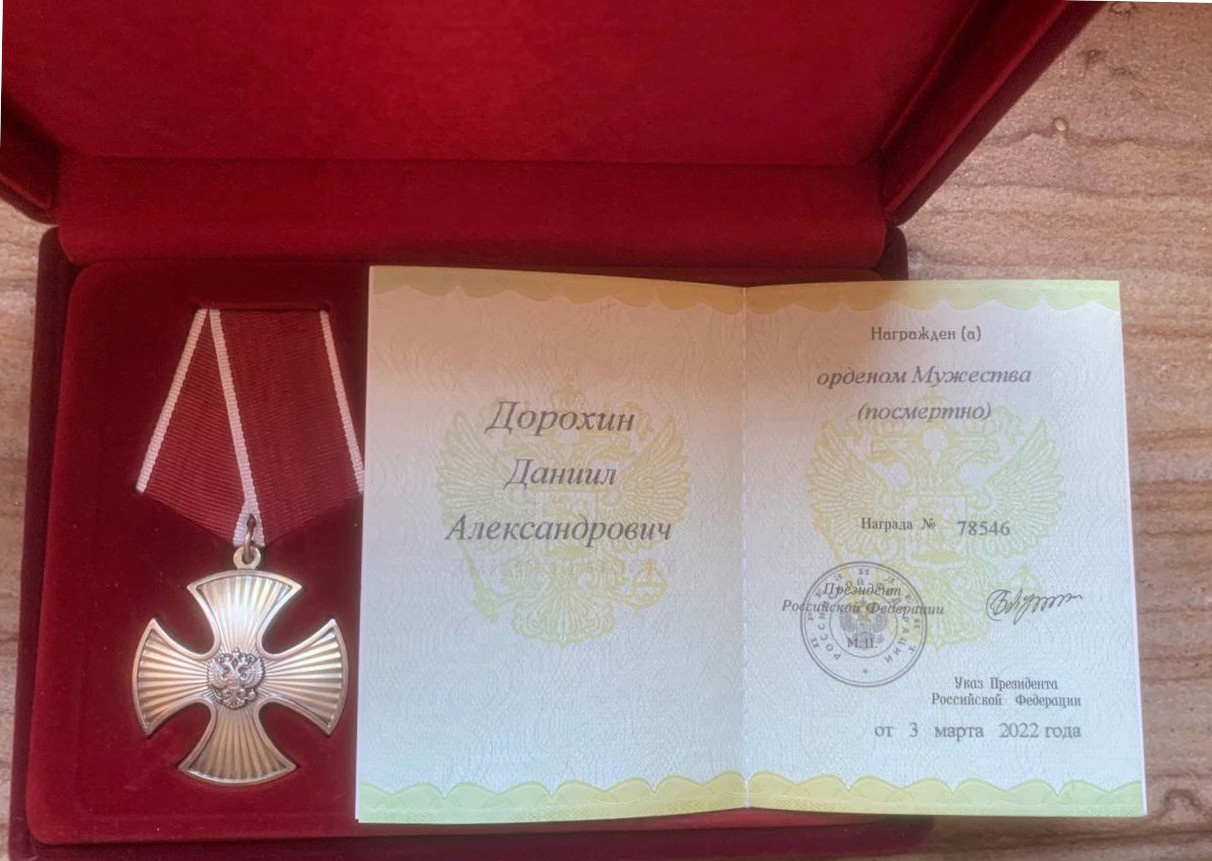 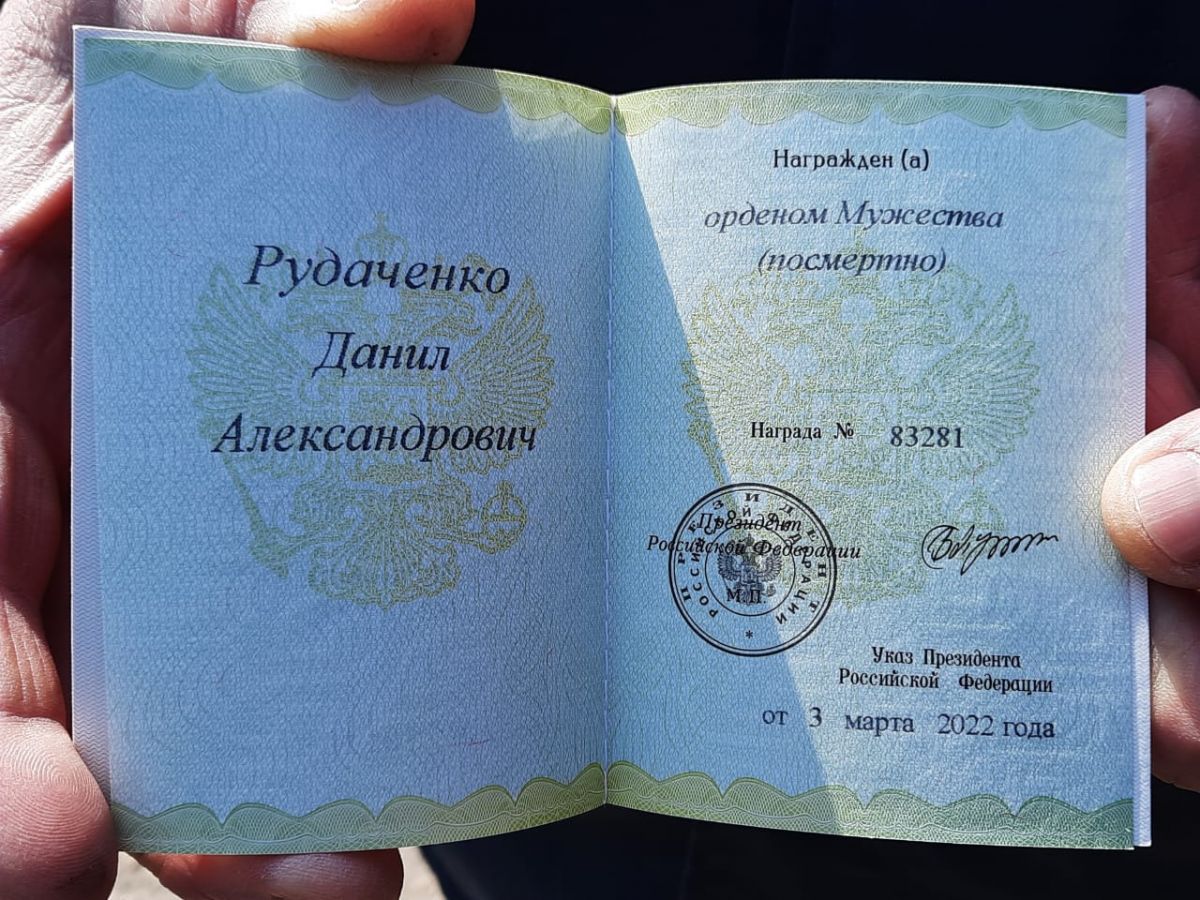 It is immediately striking that a large number of awards relate to the presidential decree signed on March 3 – this is about a week into the full-scale war against Ukraine. That is, those who died in the first days got on this decorations list. It was on this day that the Russians reported their losses for the first, and so far for the last time.

The lowest serial number of the posthumous Order of Courage according to the decree of March 3, 2022 which we could find is 78487.

The difference between them makes 4794 orders. This is a very rough assessment, because every day we find new numbers, and these figures will most probably be adjusted upwards, increasing the count of the decree of March 3rd. Most of the awards for this day are posthumous, because only the Medal for Courage was issued for non-lethal wounds.

That is, the number of issued posthumous awards approximately matches the data published by Ukraine on the losses of Russians in the first days of the war.

What is the numbering system of Russian awards? 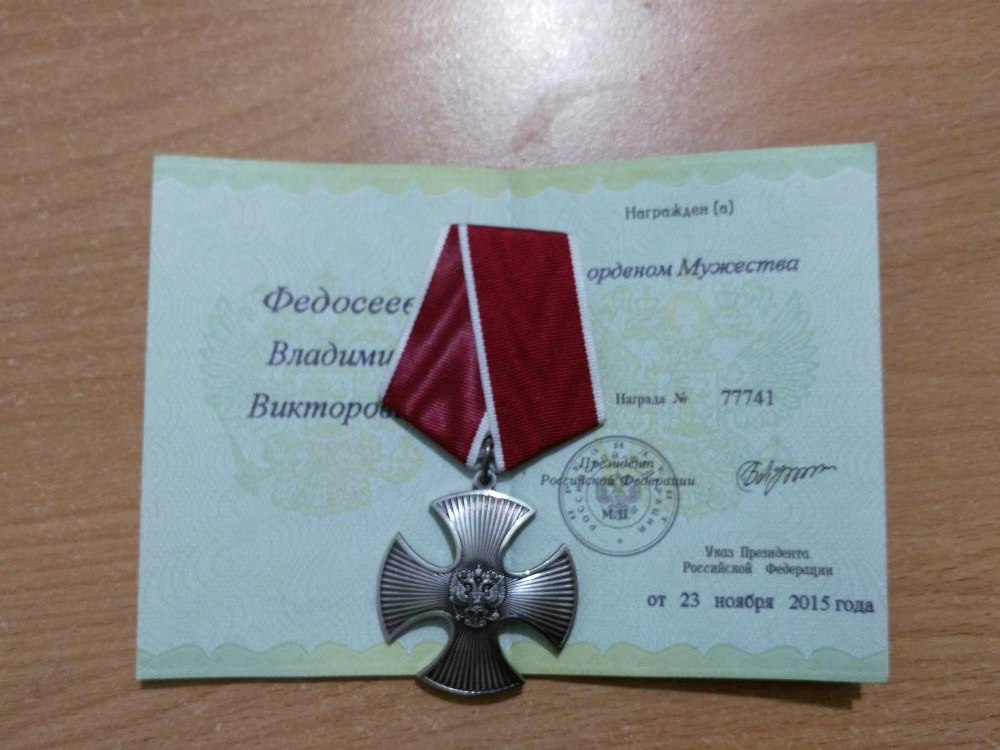 The Order of Courage is also given to civilians, for example, for individual feats in extinguishing fires, or to important artists or scientists, but these cases are very rare. For the most part, this is a typical military award, and the intensity of decorations clearly correlates with the outbreak of hostilities – in Chechnya, Syria, Crimea-Donbas 2014 and others.

There are cases when an award with a lower serial number is issued by a new decree – perhaps to decorate somebody who was first missing in action, and then officially recognized as killed. Sometimes it could be a higher number on an old decree – these are also isolated cases, where some department might have reserved number slots for their awards. But mostly, we see serial numbers gradually increasing.

During the First Chechen War and until the end of the 90s the numbering was from 0 to 30000. During the Second Chechen War and before the seizure of Crimea and the war in the Donbas the numbers ranged from 30,000 to 60,000. The Ukrainian campaign for the Russian army started with numbers as of 7xxxx.

And Putin’s mass posthumous decoration of March 3 stands out prominently.

The Ukrainian army will gladly issue an “Order of Courage (posthumously)” to every Russian occupier!

No Responses to “Medal count: OSINT analysis of real Russian losses for the first week of hostilities in Ukraine”