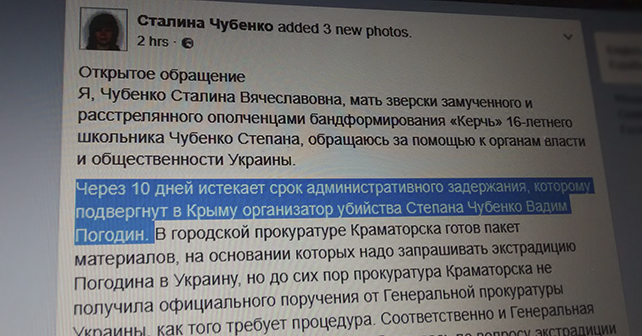 On July 19, the mother of the Ukrainian schoolboy Stepan Chubenko appealed for help to the authorities and the public of Ukraine. In the summer 2014, Stepan Chubenko was abducted, tortured and then executed by Donetsk People’s Republic (DPR) militants of the Kerch gang under command of Vadim Pogodin. Upon the request of Ukraine sent through Interpol, Pogodin was detained by the Russian occupation authorities in Crimea. The end of his administrative detention is set for 30 July. A conflict of laws threatens to derail the extradition.

Stepan Chubenko’s mother wrote an open appeal on her Facebook page calling on the prosecutor’s office to immediately move forward the documents of the investigation and request the extradition of Pogodin to Ukraine.

As reported by censor.net, Pogodin is accused of a number of grave crimes: torture of Ukrainian POWs and the murder of Stepan Chubenko, a 16-year-old teenager from Kramatorsk. In the summer of 2014, Pogodin’s militants took the boy off the train for wearing a ribbon in the colors of the Ukrainian flag. He was subjected to torture. By Pogodin’s order, his subordinates Mikhail Sukhomlinov and Yuri Moskalev took the boy to a village near Donetsk, and there Pogodin ordered to kill him. Pogodin himself and Sukhomlinov shot Stepan Chubenko to death. After the crimes committed in Donbas, Pogodin fled to Crimea. In the summer 2017 he was detained there at the Interpol request.

At the end of June 2017, the InformNapalm volunteer intelligence community published materials obtained by hacktivists of the Ukrainian Cyber ​​Alliance dealing with other crimes of Pogodin, which did not get the attention of the investigators.

Russian militants reacted hysterically on social media to the news of possible extradition, some even wrote requests to the State Duma, the Russian parliament, trying to prevent the extradition of Pogodin. At the same time, another Russian terrorist Sergey Dubinsky (call sign Khmuriy, suspected of a number of crimes, including involvement in the downing of MH17 flight) denied any possibility of extradition in his post on Odnoklassniki social network. He wrote that he was personally summoning his connections at the highest level to prevent extradition, but the Ukrainian citizenship of Pogodin was an issue. We should like to remind that Dubinsky is a member of the Union of Donbas Volunteers, an organization personally supervised by the Russian president’s aide Vladislav Surkov.

Translated by Artem Velichko
An active link to the authors and our project is obligatory for any reprint or further public use of the material.
(Creative Commons — Attribution 4.0 International — CC BY 4.0)
Repost and share with friends.
For notifications about InformNapalm investigations follow us on Facebook / Twitter / Telegram.