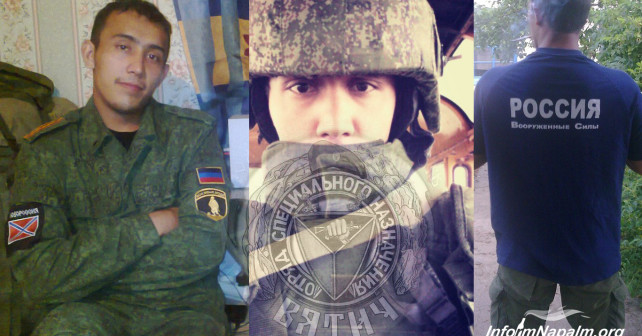 A ‘Donetsk separatist’ from the 15th special forces squad ‘Vyatich’ of the Interior Troops of the Russian Federation.

We continue to disclose the facts of the Russian servicemen’s presence in Ukraine. This time another participant of the ‘civil war’ is identified – ‘Artem Kupriyanov’ (archive). On closer examination, he appeared to be Aitugan Unusov, a Russian spetsnaz fighter (archive) from the 15th special forces squad ‘Vyatich’ (Russia’s Internal Troops, military unit No. 6761, Armavir, Krasnodar krai, North Caucasus Regional Command).

This is so-called ‘Armavir spetsnaz’ (it made me recall the fight at height ‘715.3’ in Dagestan in 1999). It should be noted that the ‘Information Resistance’ group mentioned deployment of this unit to Ukraine in December of 2014. But there were no photo- or video-proofs of the ‘Ukrainian assignment’ provided. Conducting research of publicly available sources, InformNapalm community has found several evidence which made the basis of our investigation.

So, Unusov underwent compulsory military service in 2011-2012. The photos from that time can still be found in the Net (archive). 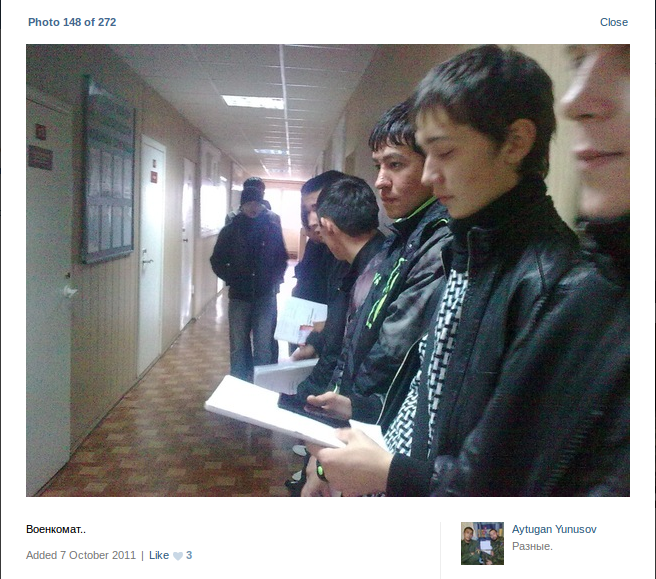 These are the pictures of him wearing the Russian ground forces uniform (archive 1 and 2). 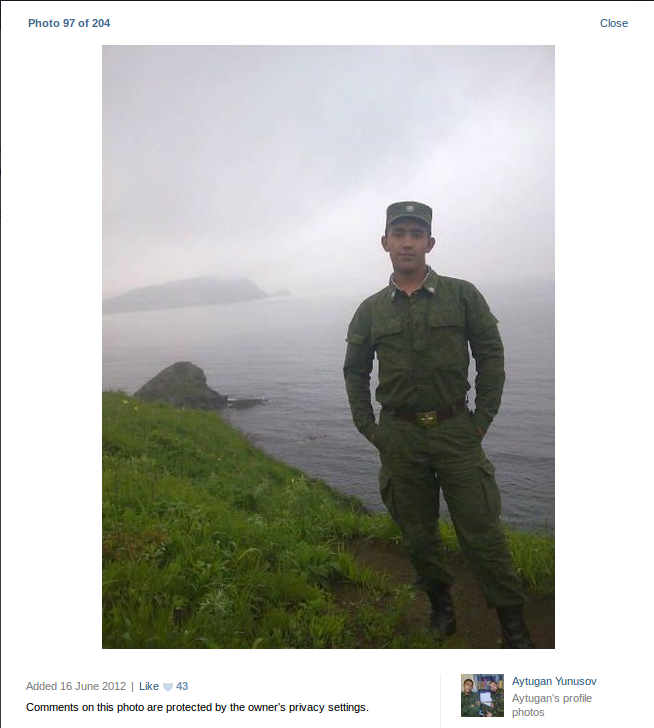 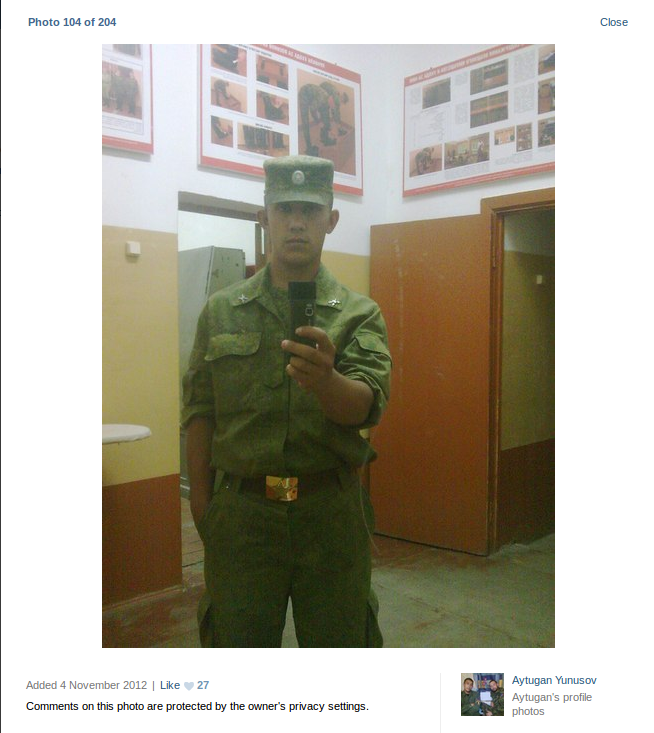 But in the period from February, 2013, till January, 2015, pictures show him in the uniform of the Internal Troops (archive). Here are more photos from those times:

Special attention should be paid to the exposed banner of the 15th squad ‘Vyatich’ (archive) and the ‘white horse on black background’ arm badge, which means belonging to the North Caucasus regional command of the Internal troops (archive). 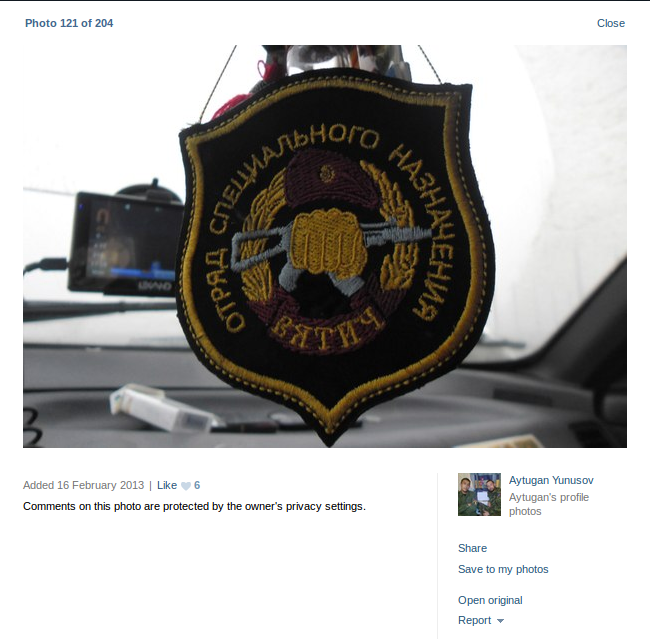 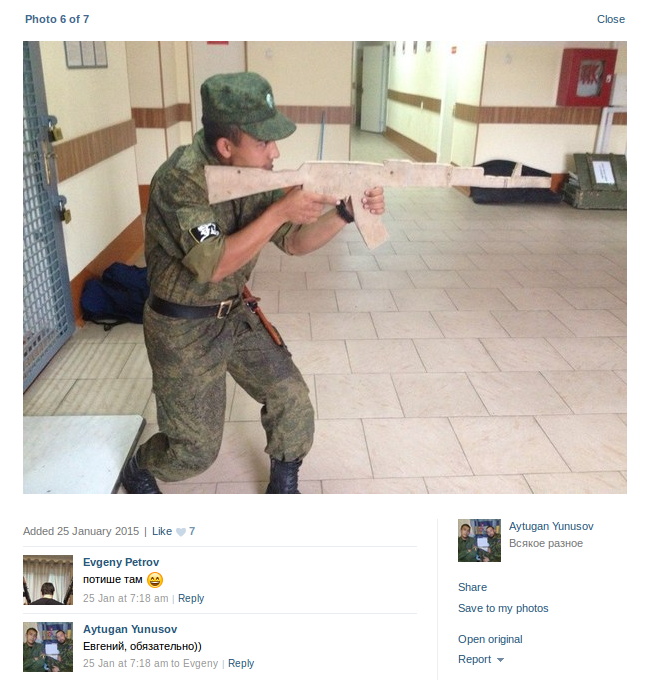 Now the 15th squad consists of contract soldiers only, and a ‘new’ contract is signed for 1 (seldom), 3, 5, 10 years, or it can be termless. Taking into account the chronology of the photos, Unusov signed at least a 3-year contract. A typical ‘first year contract’ scheme does not fit here (1 year of compulsory service + 2 years of contract) – he served in different troops during the compulsory and contract service.

By a strange coincidence, in February, 2015, a fake ‘Artem Kupriyanov’ appeared as a false-militant with callsign ‘Multik’. This was the cover for Unusov, who started to fight in Ukraine. Here are several pictures from his trip to Ukraine:

In general, it is clear where he was (especially on this photo – ‘Flag Day’ in ‘DPR’). 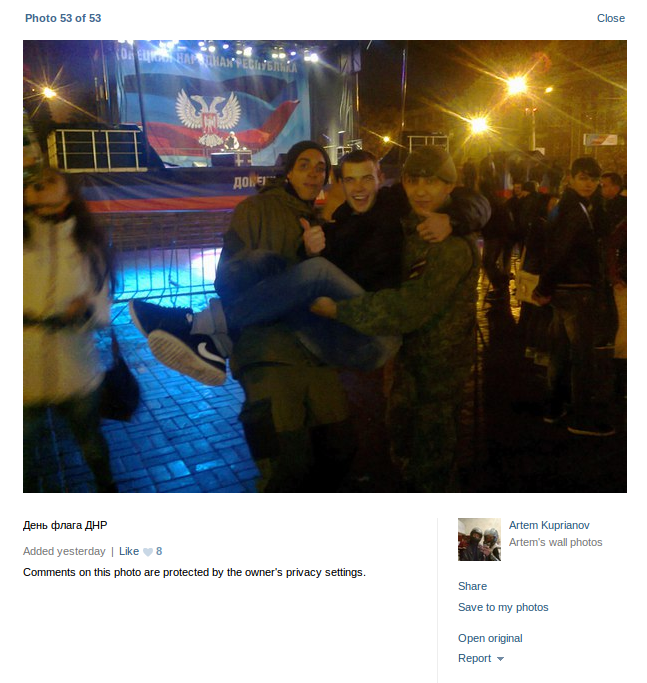 Comparing both profiles the following details catch the eye:

1. Unusov uploaded a single ‘militant’ picture to his ‘real’ profile : 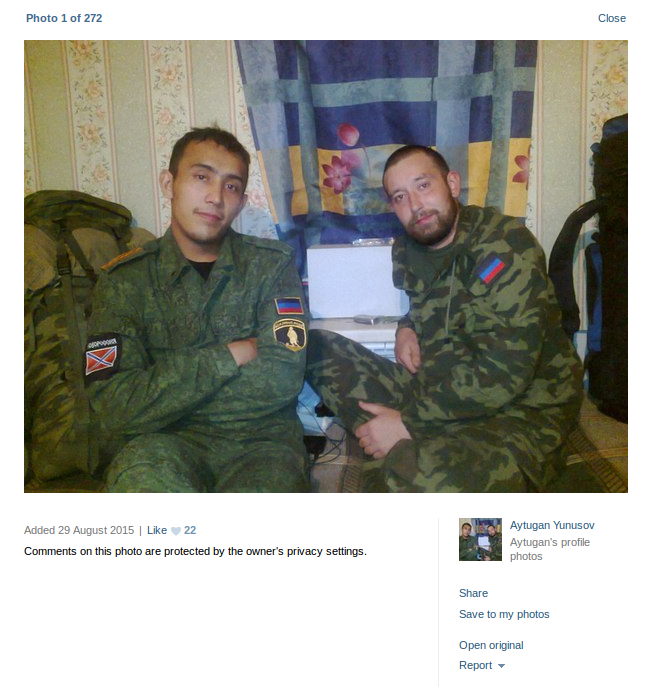 2. Everywhere you can find the outward similarity between ‘Kupriyanov’ and Unusov

3. An important detail: ‘Kupriyanov’ was let down by his love to motorcycles. He also screwed up by uploading a picture with ‘Armavir motocross‘ label to his fake profile. Armavir is the home base of ‘Vyatich’ squad. 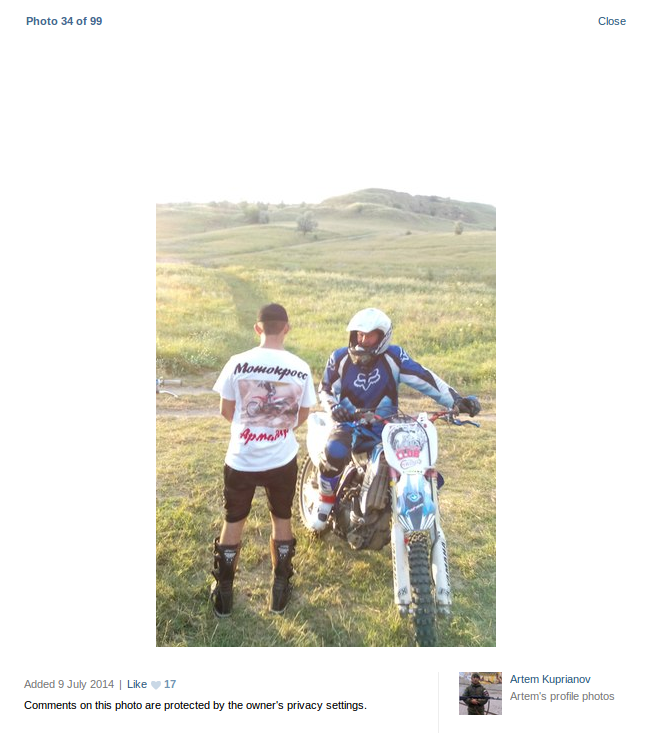 4. Another motorcycle clue – the same faces and sport wear in both accounts: 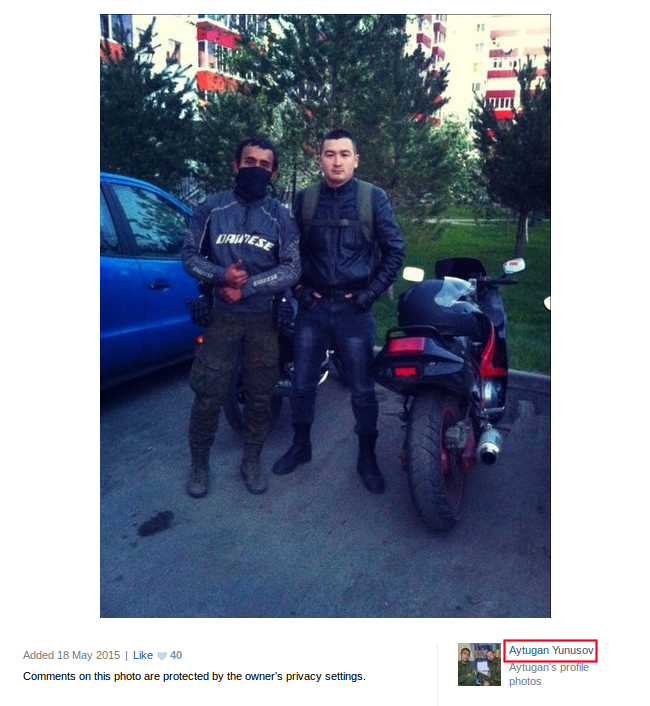 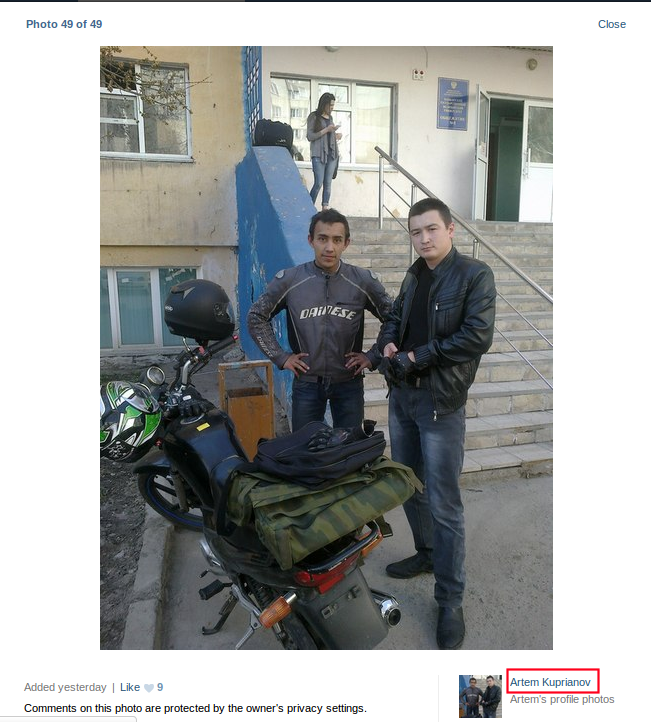 5. Again we see the similarity between a friend (a person with beard) of ‘Kupriyanov’ (archive) and a friend of Unusov (archive). 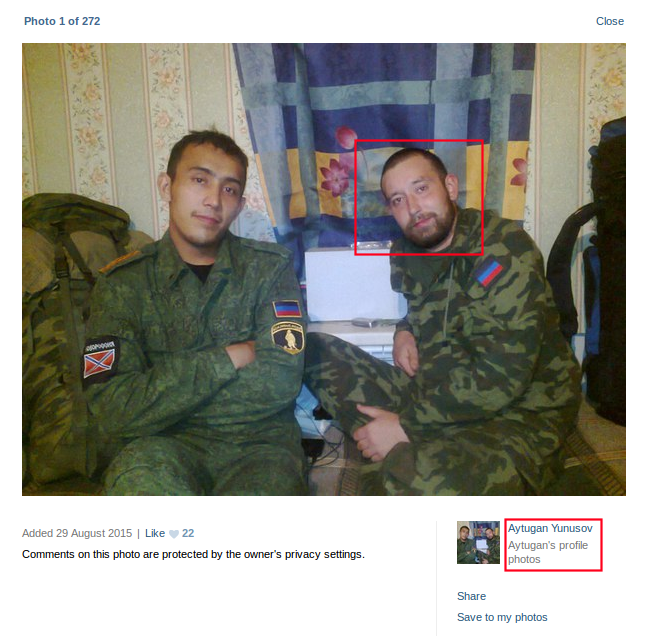 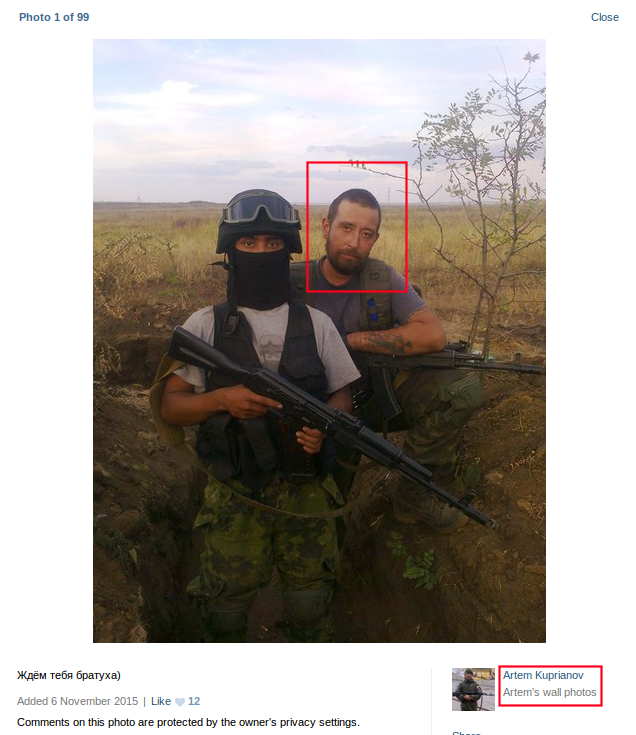 Concluding, we can assume that ‘Kupriyanov’ and Unusov are the same person. And the information about the 15th spetsnaz squad will be saved in the database with facts of the Russian invasion in Ukraine.