Ochir, Go Home! Soldiers of the Eastern Military District of the Russian Federation on the Ukrainian border 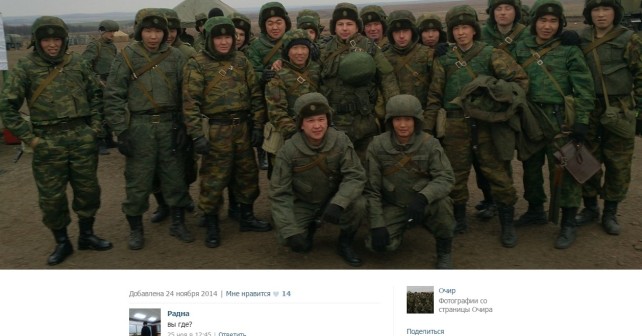 Apparently, all our and Dorjo’s (Dorjo Dugarov, https://www.facebook.com/dorjo.dugarov) efforts have come to nothing. The subject of national minorities’ participation in an escapade against Ukraine on the orders from Kremlin will remain ignored – until the body bags start coming home.

It has been two weeks since the first publication discussing the deployment of the 5th Armored Brigade and other units of the Eastern Military District (EMD) to the Ukrainian border. These units are staffed mainly by soldiers representing national minorities (Buryats, Tuvans, Yakuts). The outrage by Ukrainian and Russian readers was brief, and then everything was forgotten. At the same time the pressure of political instructors and special agents on the soldiers from EMD eased. Soldiers began again to upload pictures taken in Rostov region. And most of them are wet behind the ears, very young and inexperienced guys.

For example, Ochir, a soldier from the 5th Armored Brigade. He is only 20 years old, does not seem to be a stray, he has a sister Surena and a girlfriend Ayuna. But like all boys of his age, he loves adventures and bravado. 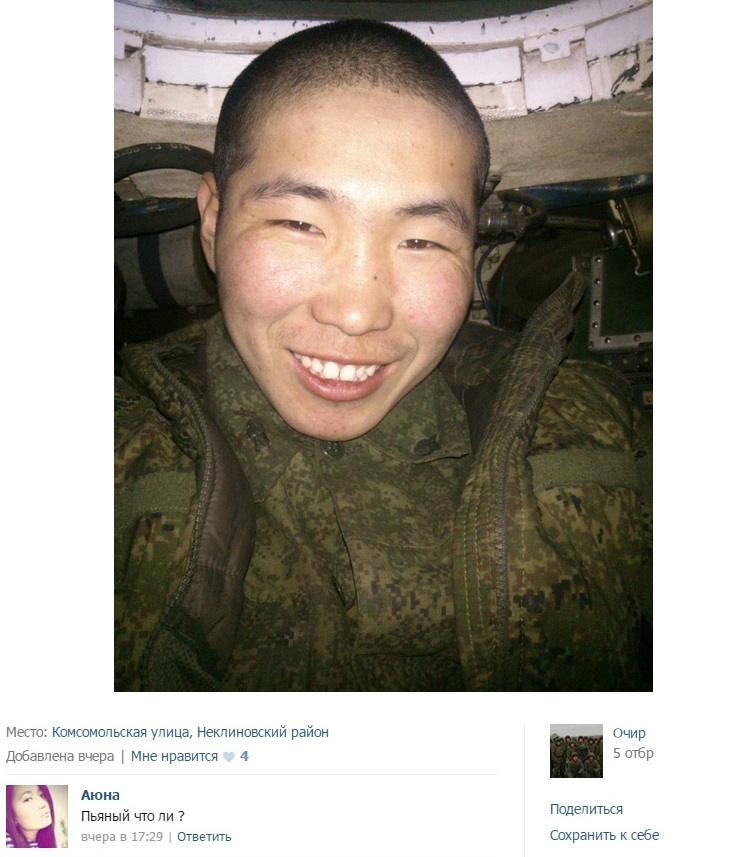 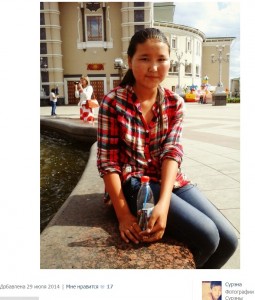 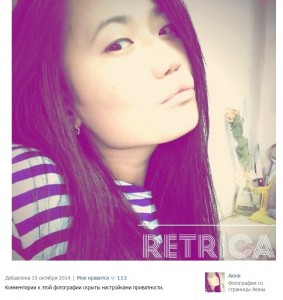 It is worth recalling what the outcome of such an adventure was for the soldiers of the 17th Brigade from the Chechen Republic, who did have several years of experience of the service in conflict areas (see the publication “They Went On “Vacation”: 9 Soldiers of the 17th Motorized Rifle Brigade of Russian army in Chechnya Killed in Battles in Donbass” http://censor.net.ua/photo_news/313776/sezdili_v_otpusk_9_soldat_17yi_motostrelkovoyi_brigady_armii_rf_iz_chechni_pogibli_v_boyah_na_donbasse ) 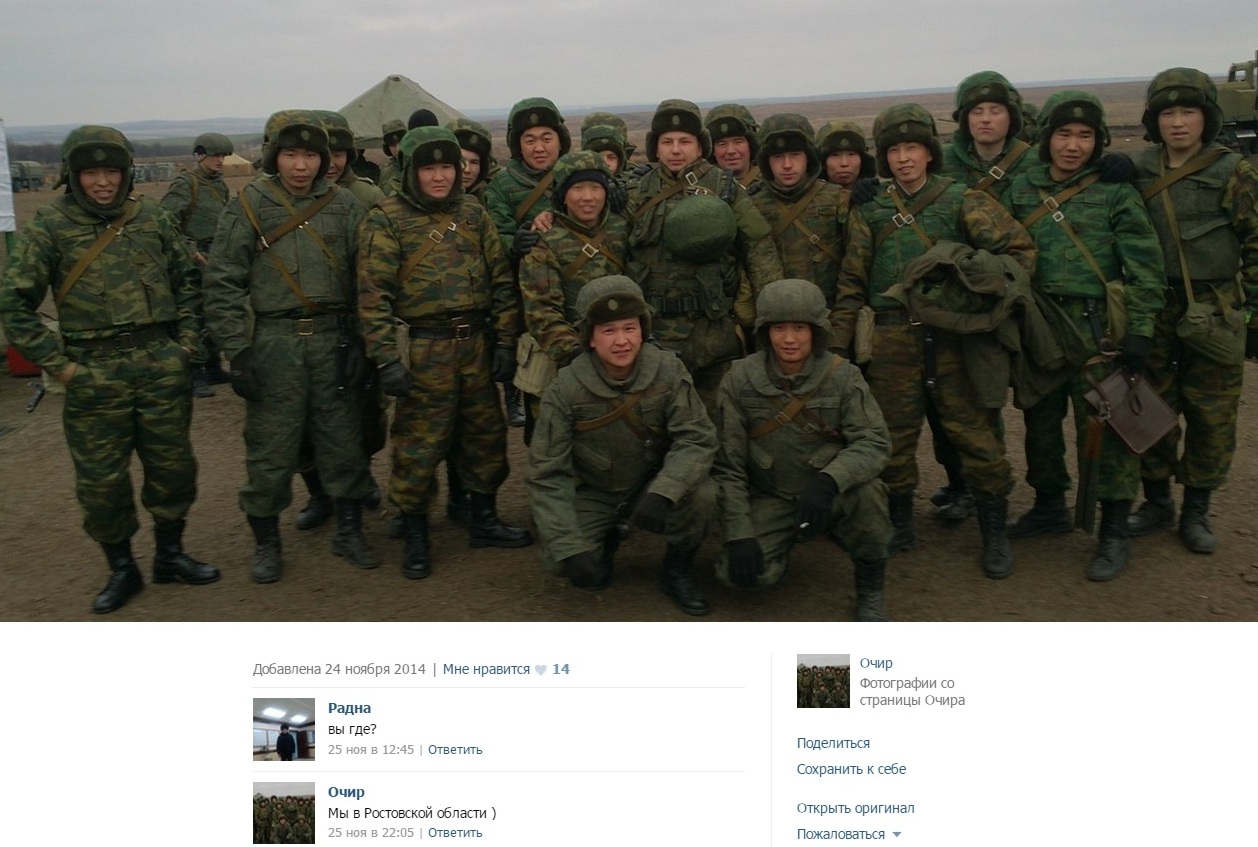 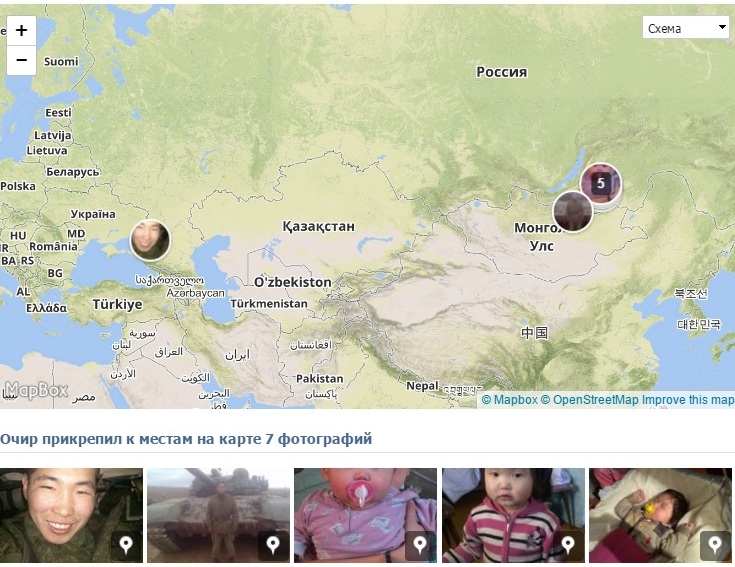 We hope that our information will reach the parents, wives and relatives of these soldiers from Buryatia, either through the media or through reposts in social networks.

People shouldn’t remain silent, it’s time for the small nations to wake up and realize that they are being sent to slaughter while those who started this war avoid serving in the army by all means, warming their bones on foreign beaches. If relatives of Ochir and other soldiers from Buryatia do nothing to get them out (whether appeal to the Committee of Soldiers’ Mothers or do something else – it’s up to them), their loved ones will soon be the heroes of very different articles, with much sadder headlines.

Other articles on this subject:

* “Toward Kiev”, a unit of the 5th Armored Brigade of EMD as a part of the Russian invasion forces;
https://informnapalm.org/3075-podrazdelenye-5-j-tankovoj-b%E2%80%A6/

* ”The Orient Express “, Russia continues to transfer troops from the East;
https://informnapalm.org/3163-vostochnyj-ekspress-rossyya-%E2%80%A6/

* ”Toward Kiev II”, additional information on a unit of the 5th Armored Brigade of Rostov group of invasion forces;
https://informnapalm.org/3261-dopolnytelnaya-ynformatsyya-…/

* Buryat community against the war in Ukraine;
https://burkonews.info/buryat-community-war-ukraine/

(с) This information was gathered exclusively for the project InformNapalm. Copying and use of the materials are allowed provided that a reference to the author and a link to our website are given.

2 Responses to “Ochir, Go Home! Soldiers of the Eastern Military District of the Russian Federation on the Ukrainian border”