Opinion: Donetsk Airport as a Place to Eliminate the Unwanted 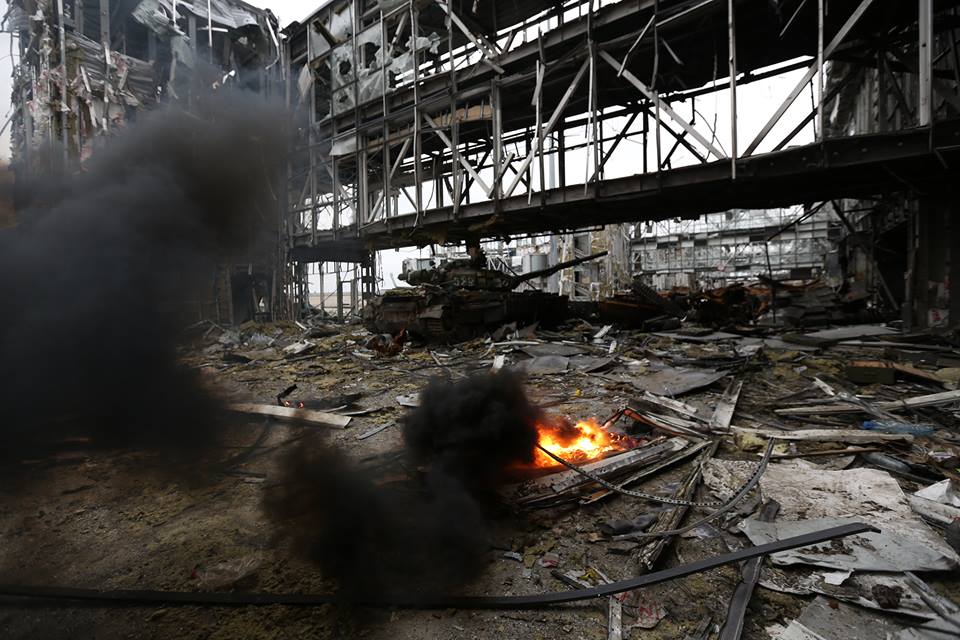 Why do the separatists need the airport? Every attempt to seize the airport results in failure and brings more and more glory to the “cyborgs” defending it. From the first glance, the immense losses of the adversary near the airport are not justifiable: the tactics of the frontal attacks on the well-defended positions of the Ukrainian fighters look like yet another example of the crazy “war Russian way”. So what drives the separatists to attack the airport, knowing well in advance that they have no chances whatsoever?

There might be only one possible explanation to that: what if the Russian operation near Donetsk airport has political, rather than military goals? What if the “rebels” are being sent to the airport not to take it over, but to be simply slaughtered? Let us take a closer look at the probability of this theory.

In his recent official speeches (the annual address to the Federal Council and the annual press conference) Mr. Putin is making certain hints on peacemaking with Ukraine. Apparently, the Russian President realized that he could not repeat the Crimean scenario and is now trying to back off. Having faced the Armed Forces of Ukraine (the most unprepared armed forces in Europe as of March 2014), not being able to justify the significant losses of Russian servicemen, being pressured by the Western sanctions, Mr. Putin realized that he should wrap up “Novorosiya” project, and started preparing ground for this. However, not everyone can be convinced with words…

From our talks with the separatists’ supporters, whose sons are fighting within the DNR (Donetsk People’s Republic) militant groups, we learned the following. “The insurgents” are not allowed to walk around Donetsk with automatic weapons (a gun is allowed for the junior commanders and a knife for regular fighters). However, this rule does not apply to the Russian military personnel. Only the local fighters are being sent off to the airport.

Furthermore, most of the Russian servicemen are located not on the front line, but close to the border with the Russian Federation — one could say they serve as a border line between the seized territory of Donbas and Russia. Apparently Kremlin realizes that in case the conflict is further prolonged, the mere humanitarian aid will not be sufficient for the local goons in Donetsk. When the separatist fighters will devastate the region entirely, they will need to move somewhere else. Moving West inside of Ukraine, they have no chances, the territory is well defended by the Ukrainian army. Hence, they will go East into Rostov region.

Obviously, this is something Mr. Putin does not want to happen.

Having isolated the separatists fighters in their quasi-republics, Putin needs to calm them down. Since a trapped animal can become very dangerous and unpredictable. Mr. Strelkov, who started this entire mess, fled to Russia, where from a military commander he became a showman. Meanwhile, those, who started everything with him in Sloviansk and Donetsk are now close to misery. They have no resources (they can’t take away property, since they are the “elite”) and “Russia is betraying them all the time”. In situations like this, confrontations are inevitable. InformNapalm has already reported on numerous cases of fights between the army of the Russian Federation with the local fighters. And the Russians are not always the winners of such battles.

In recent days new gunmen started appearing in Torez and Krasniy Luch. They wear the insignia of the 16-th brigade of Russia’s Main Intelligence Department Special Force. All of them are rather senior (above 30 y.o.). Most likely this is the special force consisting of the officers, the so called “death squadrons”. In any case the “Cossacks” from Rovenki, Antratsyt and Sverdlovsk started disappearing. However, the locals are also “returning the favor”. There are event reports that the local fighters are contacting the service members of the Armed Forces of Ukraine with the offers to jointly kill Russian servicemen.

Hence, the “crazy desire” to seize the Donetsk airport. The local clean-ups will take too much time and Russia does not have it: oil prices are falling, the dollar is rising, etc. Therefore, they need a large-scale clean-up, however, the Russians don’t have own resources to do that. Thus, it looks like the military skills of the “cyborgs” in Donetsk airport, are valued in Moscow much higher than those of their own special forces…

5 Responses to “Opinion: Donetsk Airport as a Place to Eliminate the Unwanted”