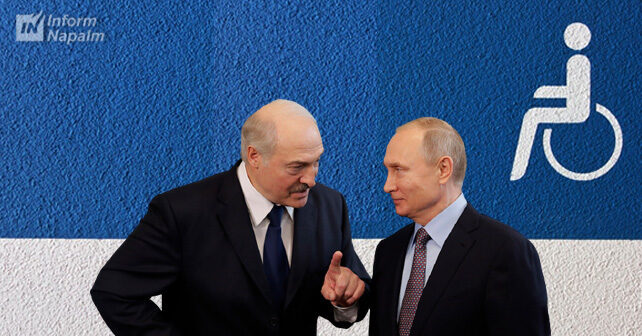 Members of the Belarusian team of InformNapalm international volunteer community conducted their own OSINT investigation and discovered the ways in which Russia uses sport for people with disabilities in order to tie the self-proclaimed president of Belarus Aleksandr Lukashenko to the temporarily occupied territories in Eastern Ukraine. The article also describes schemes that Russian terrorists use to illegally transfer children from the occupied territories of Donetsk and Luhansk oblasts to Russia and Belarus.

The story that started in spring 2021 came to its logical conclusion only in September. ON April 30, Aleksandr Tala, a sportsman, a member of the Belarus national team of sportsmen with disabilities, and (since March 2021) a member of the Constitutional Commission for the Amendments to the Constitution of Belarus, went to the territory of Eastern Ukraine temporarily occupied by the Russian troops and illegal hybrid armed gangs. This fact is confirmed by Talai’s social media page on Vkontakte. Talai stayed in the occupied territory until May 5 (Vkontakte social media page, web archive). During his trip, he was invited as an “honorary guest” to attend a swimming competition for people with disabilities.

Vladimir Antonov, a deputy head of the “DPR government”, together with Stavros Bagateliia, a native of Abkhazia and a former member of Piatnashka armed gang who seized a chain of grocery stores ATB in Donetsk also attended the swimming event (Vkontakte account, web archive). Bahateliia calls himself “a head of the DPR Paralympic Committee” (link, web archive) 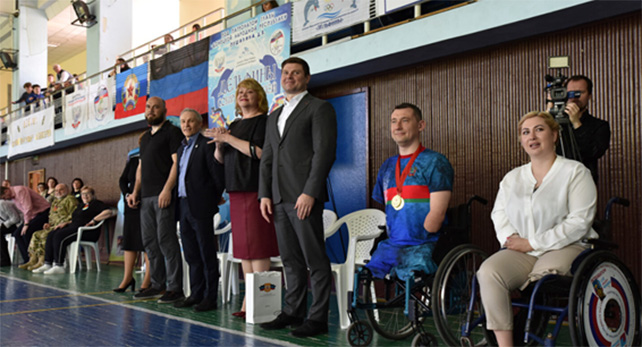 Besides that, Aleksei Talai met the Metropolitan of Donetsk and Mariupol Illarion of Orthodox church of Moscow Patriarchy,  as well as the “administration” located in a captured building of Yasinovata, Donetsk oblast, Ukraine (web archive) 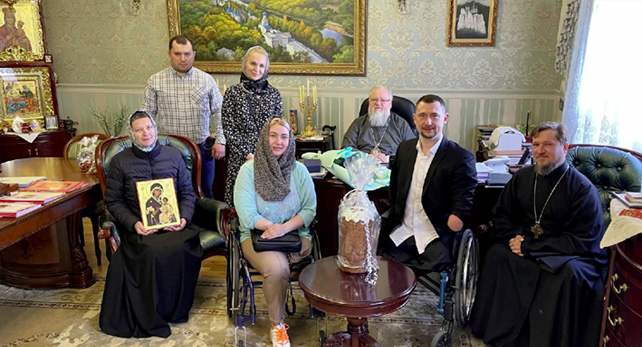 During those meetings, Talai was accompanied by a person whom Talai describes as a “faithful friend” in his interviews and recordings. Talai never mentioned the last name of that person. This picture shows them both at the front entrance to the captured administrative  building in Yasinovata  (web archive) 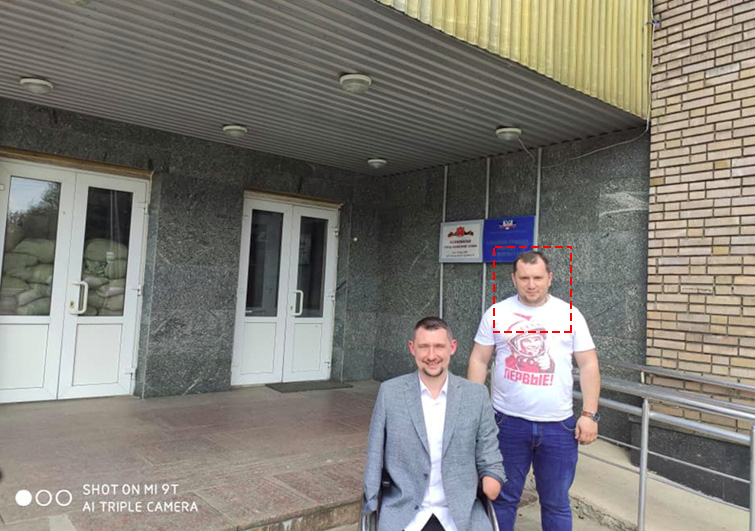 Who is the “faithful friend” of Aleksei Talai?

InformNapalm managed to find out that the name of this person is Vladimir Kazbanov. He is a medical doctor by education, tasked with organizational activity “directed at collecting new ideas from various spheres of knowledge.” He founded two organizations: Center for Support of Entrepreneurship Laboratory of Intellect (registered in the name of his wife, Svetlana Kazbanova) and Center for Youth Innovations. In 2010, Kazbanov attended the Russian Youth Forum in Seliger. After that, speaking  to the internet media Soiuznoe Veche, Kazbanov promoted the so-called “integration of Belarus and Russia” and declared that this was a goal he aspired to achieve (web archive). 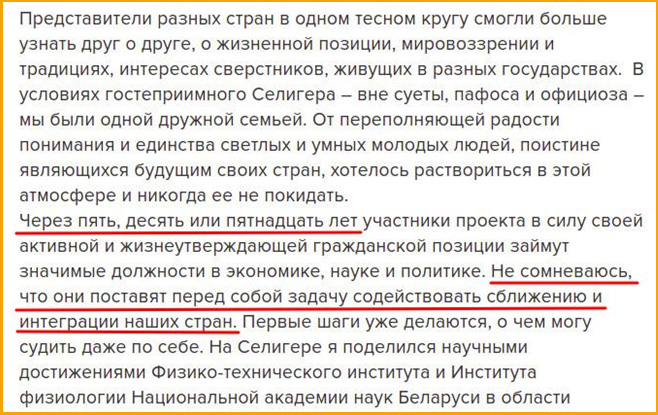 In 2012, Kazbanov posted a photo  on his social media account with a comment: “In the main office of Rossotrudnichestvo” (Federal agency for CIS Affairs, Compatriots Living Abroad and International Humanitarian Cooperation) (web archive) 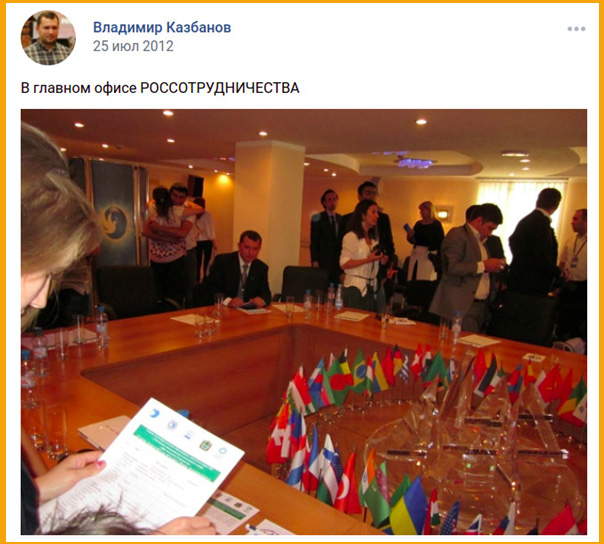 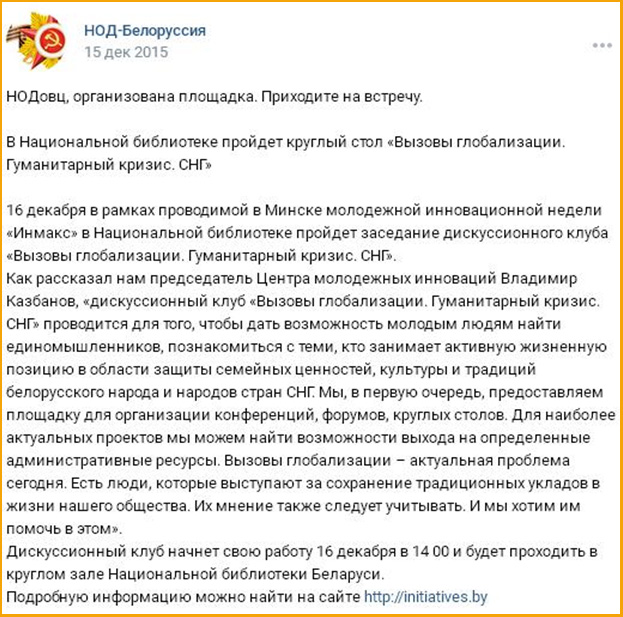 That said, for many years, Kazbanov actively maintained contacts with the Russian institutions created to promote the “Russian world” in Ukraine and Belarus.

Soon after his trip to the occupied Donbas, Aleksei Talai suggested “to establish social connections and a humanitarian mission in the Donbas.” This happened on May 27, during the press conference of Aleksandr Lukashenko (video recording time code: 2:09:07). The response of Lukashenko was: “You can consider it done. Try to send your proposals through the channel that you know of” (web archive).

Based on this conversation, by that time, Aleksei Talai and his “faithful friend” had already established contacts with representatives of Russia-controlled terrorist groups in the occupied territories of the Donbas.

On August 17, Aleksei Talai launched a crowdfunding campaign on the webpage of his  charity fund. The declared goal of that campaign was  “to bring children with disabilities to Belarus for rehabilitation, then to bring orphans and children from low-income families for health care, then to collect and deliver help (food, hygiene products, clothes, equipment) directly to them”. At this time, the campaign has ended (web archive)

It is possible that Vladimir Kazbanov might have had access to the bank account listed on the web page of Talai Fund and where the donations were made. This conclusion comes from Vladimir Kazbanov’s comments under Aleksei Talai’s post on Facebook where Kazbanov listed the exact sums of money collected as of a particular date (link). 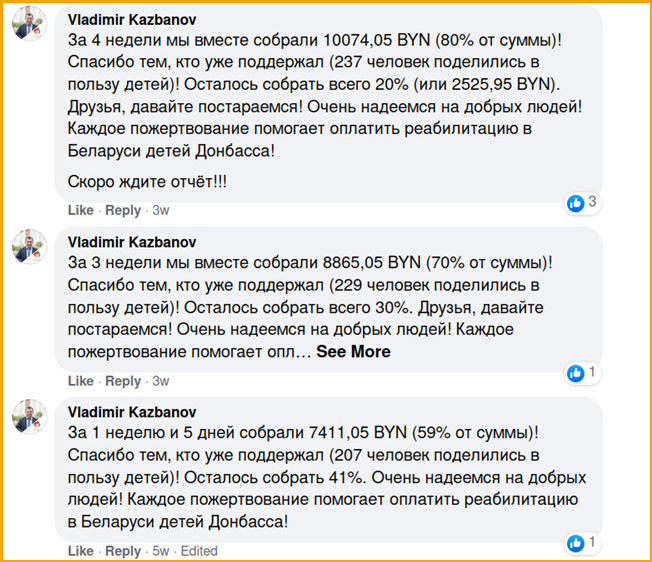 It is possible that Oleh Dodonov was also involved in the scheme. Since 2015 Dodonov has lived in Belarus; before that, he lived in Luhansk Oblast, Ukraine. Dodonov is listed in the database of Myrotvorets Center. He is suspected of participating in acts of humanitarian aggression against Ukraine.

Dodonov’s involvement in the scheme is confirmed with the comment that appeared under Aleksei Talai’s post. Dodonov wrote that there was a similar project aimed at the occupied areas of Luhansk Oblast (web archive).

The turning point in the above mentioned events happened in September. On September 15, the official web page of president of Belarus published new Aleksandr Lukashenko’s decree “On the Organization of Recreation of Children from Donetsk Oblast at the Sstate Children Health Center Zubrionok” (web archive). Despite the fact that the decree mentioned simply Donetsk oblast, further events demonstrated that the order concerned only the occupied parts of Donetsk Oblast.

At about the same time, numerous websites of the so-called DPR published information about bringing children to Belarus.

First, the so-called “Ministry of Transport of DPR” wrote about this two days prior Lukashenko’s decree. On September 13. the Ministry of Transport announced that it reserved buses to transfer 200 children and 16 adults who accompanied them to Rostov Oblast in Russia. There, the group was supposed to get on a train Adler-Minsk (web archive). By the way, the date, September 13, demonstrates that everything has been prepared in advance. It also means that by the time the information was published, children were already approaching Minsk.

Secondly, the information about the transfer of children appeared on a web page of the so-called “Deputy Head of the Government of DPR” Vladimir Antonov (web archive)

This might mean that one of the institutions that coordinated the process or functioned as a primary covert coordinator was the Ministry of Foreign Affairs of Russia.

By the way, the news that appeared after the group reached Belarus listed a smaller number of children in the group – around 150.

Not all children were orphans or had disabilities. The group included students from the Donetsk militarized educational institution, “the Cadet Corps of Zakharchenko.” This school basically trains future militants (Vkontakte social media page , web archive). Based on the fact that the head of the group was Aliona Levitskaiia (Vkontakte social media page, web archive) who is also a head of a summer camp at this militarized school named after a mercenary and collaborator Zakharchenko (link, web archive), we might assume that “cadets” constituted the majority of the group.

More information on the use of children from the occupied territories in the militarized projects of the Russian Federation is available in our special issue Putinjugend: Children for Russian War

The OSINT investigation was prepared by the monitoring service of the Belarusian editorial team of InformNapalm international volunteer community. Translated by Max Sviezhentsev, edited by Svetlana Kemblowski.