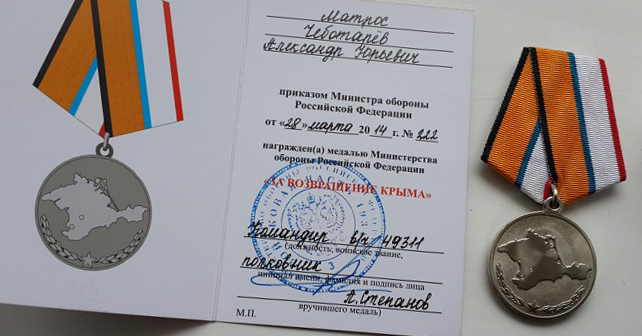 Servicemen of the 7057th Naval Aviation Base (NAB) of the Black Sea Fleet of the Russian Armed Forces (military unit #49311, stationed in Kacha village, Crimea) participated in the invasion and annexation of the peninsula. InformNapalm volunteer intelligence community established this fact through open source intelligence. This military unit, along with other Russian units of the Black Sea Fleet, was temporarily based in Crimea in accordance with the status of forces (SOFA) agreement between Russia and Ukraine, however in flagrant breach of the SOFA the unit actively participated in the invasion and annexation of Crimea. We have found evidence confirming that all of the personnel of the 7057th NAB was awarded medals For the Return of Crimea. 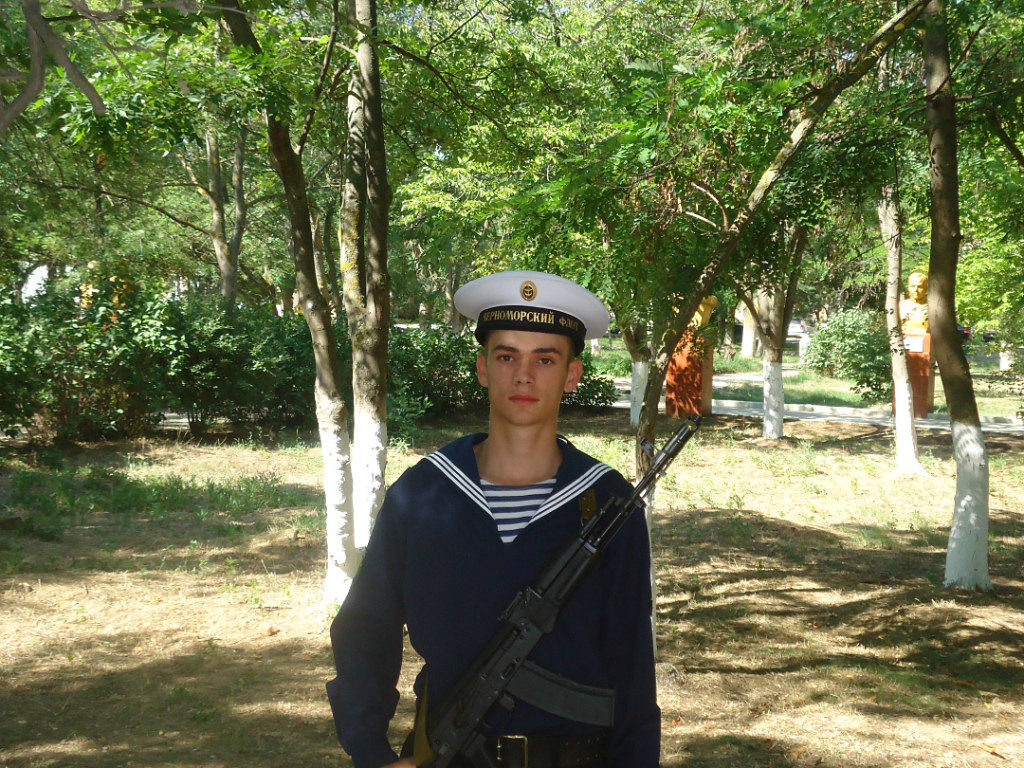 He served in the Russian Army as a conscript in 2013-2014. He posted on OK social network his permanent duty station:

“Served as a sailor at the 7057th NAB”. The picture below is taken next to the clubhouse of the military unit #49311. 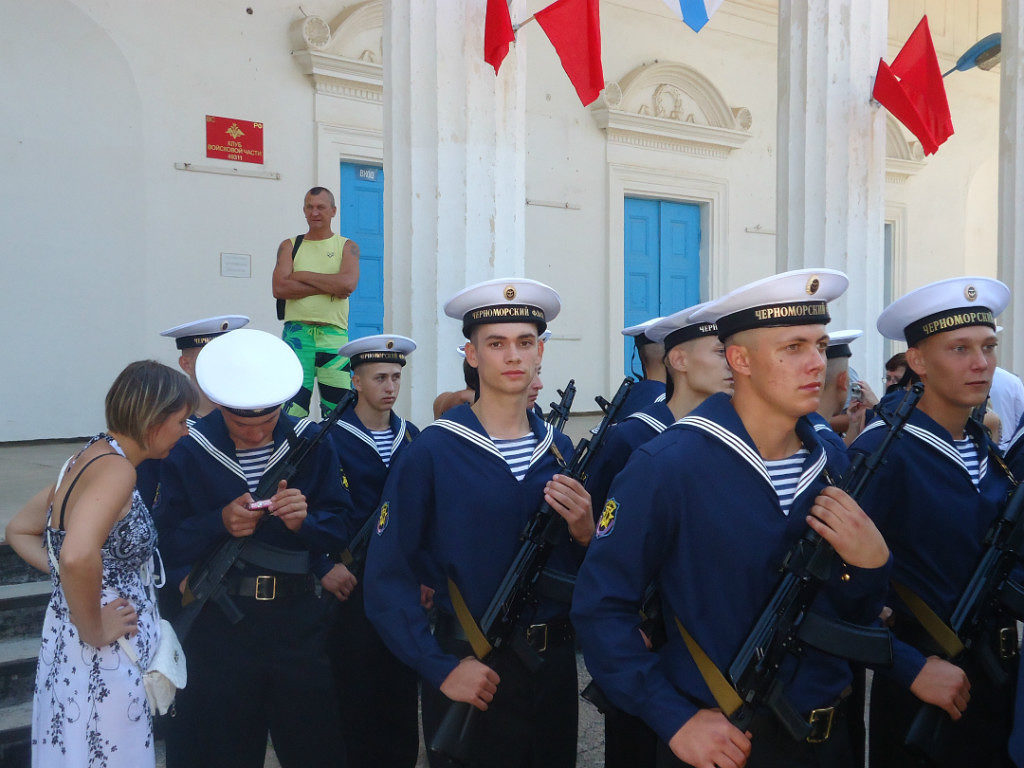 Chebotarev also received a medal for the occupation of Ukrainian land. In his social media profiles, he posted a photo of the medal and its award certificate. 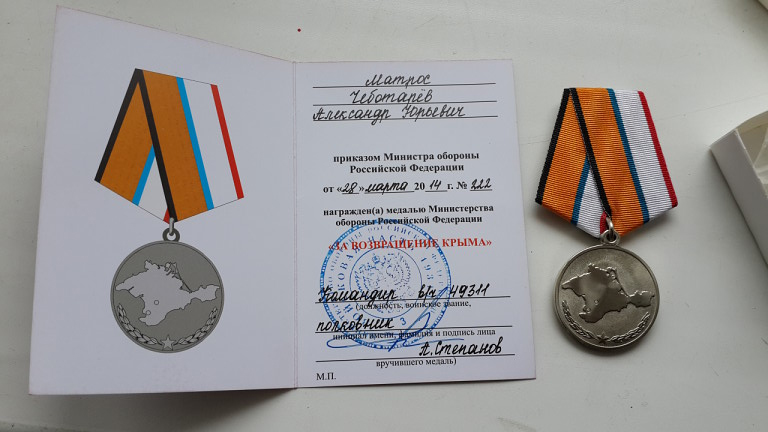 After demobilization he works at the Ministry of Emergency Situations of the Russian Federation. 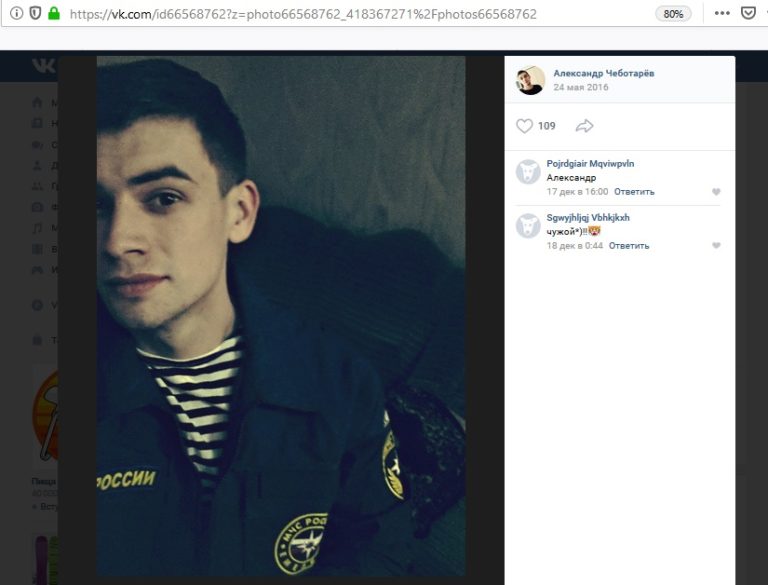 Commander of the 7057th NAB

Award certificates for servicemen of the 7057th NAB to medals for occupation of Crimea were signed by the commander of the air base, Colonel A. Stepanov.

Anatoly Stepanov, born December 26, 1967, in Petropavlovsk-Kamchatskiy city, Russia. At present, he resides at the air base garrison in the village of Kacha in temporarily occupied Crimea.

Source of the photo – Red Star. 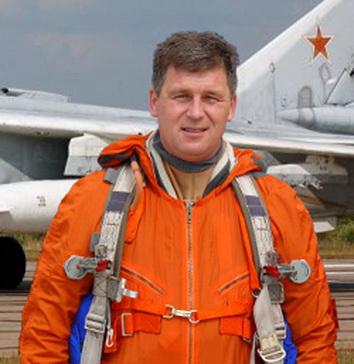 The picture from Stepanov’s account on OK social network.

In 2011, the air bases in Hvardiiske and Kacha were merged into the 7057th NAB, which was headed by A. Stepanov. 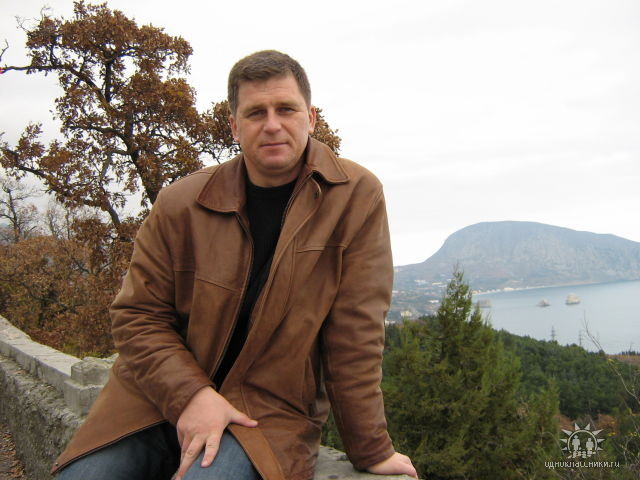 Stepanov is involved in a number of court proceedings. In particular, in 2015 he was tried by a military court   for exceeding of authority and causing damages of more than 15 million rubles. He also lost several suits from servicemen against non-payment of assignment allowances (1, 2, 3, 4, 5). 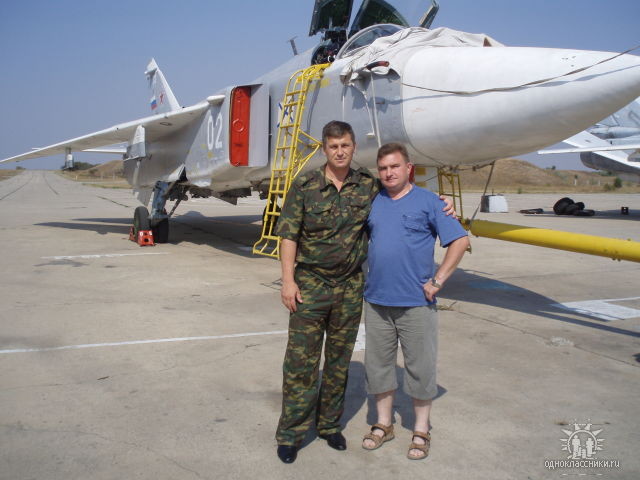 In June 2014, the 7057th NAB was reorganized, therefore A. Stepanov is currently in command of a separate composite air regiment of the Marine Aviation the Black Sea Fleet of the Russian Federation. 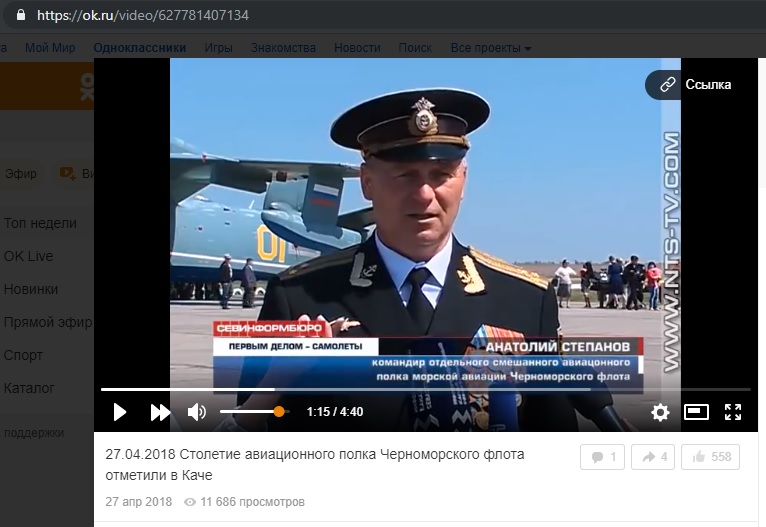 So far A. Stepanov is not on the lists (1, 2, 3) of the Russian military commanders indicted by the Chief Military Prosecutor’s Office of Ukraine. We call on the Ukrainian competent authorities to consider this feature a report of a crime against Ukraine and indict colonel A. Stepanov.

According to the Myrotvorets database, Oleh Stepanov (the brother of the commander of the 7057th NAB) had served before occupation of Crimea in the Ukrainian Navy and defected to the invaders.

Having studied Oleh Stepanov’s page on OK social network, we could establish the following: Oleh Stepanov, DOB 11.11.1971, attended school No. 5 in Novofedorivka in 1978-1988. From 1988 to 1992 he attended the branch of Luhansk Air Force Academy in Baherove settlement, Crimea. His photo album contains pictures of his service in the Armed Forces of Ukraine:

Oleh Stepanov is in the first row, first from the left, holding the flag of the Ukrainian Air Force.

He betrayed his oath to Ukraine. Awarded a medal For the Return of Crimea

The next photo represents the Stepanov brothers: the second from the left is Oleh, the first from the right is Anatoly.

This publication was prepared specially for InformNapalm..
An active link to the authors and our project is obligatory for any reprint or further public use of the material.
(Creative Commons – Attribution 4.0 International – CC BY 4.0 )
Repost and share with friends. Subscribe to the InformNapalm community pages on Facebook / Twitter.