Identified: personal data of paratrooper and scout of 108th Air Assault Regiment who participated in seizure of Crimea

InformNapalm international intelligence community continues to expand the database of Russian military personnel who participated in the special operation to seize Crimea. This article features the Russian paratrooper Maxim Artiyev, who in 2014 served in the 108th Air Assault Regiment (AAR) of the 7th Air Assault Division of the Russian Armed Forces. You will find the reasons why it is important to continue identifying each Russian serviceman who carried out criminal orders in the conclusions to this article.

In the photo, Russian paratrooper Maxim Artiyev is shown near a car with a Ukrainian license plate AK3179BC. The first letters of the plate – AK – is the code for the Autonomous Republic of Crimea. Artiyev posted this photo in his album in April 2014.

Interestingly, in January 2017, in the Crimean social media public groups there were advertisements for the search of this car (see screenshots of the advertisement are below: 1 , 2 , 3 , 4 , 5 ).

Russian soldiers like being photographed with Ukrainian hryvnias, Artiyev is not an exception: 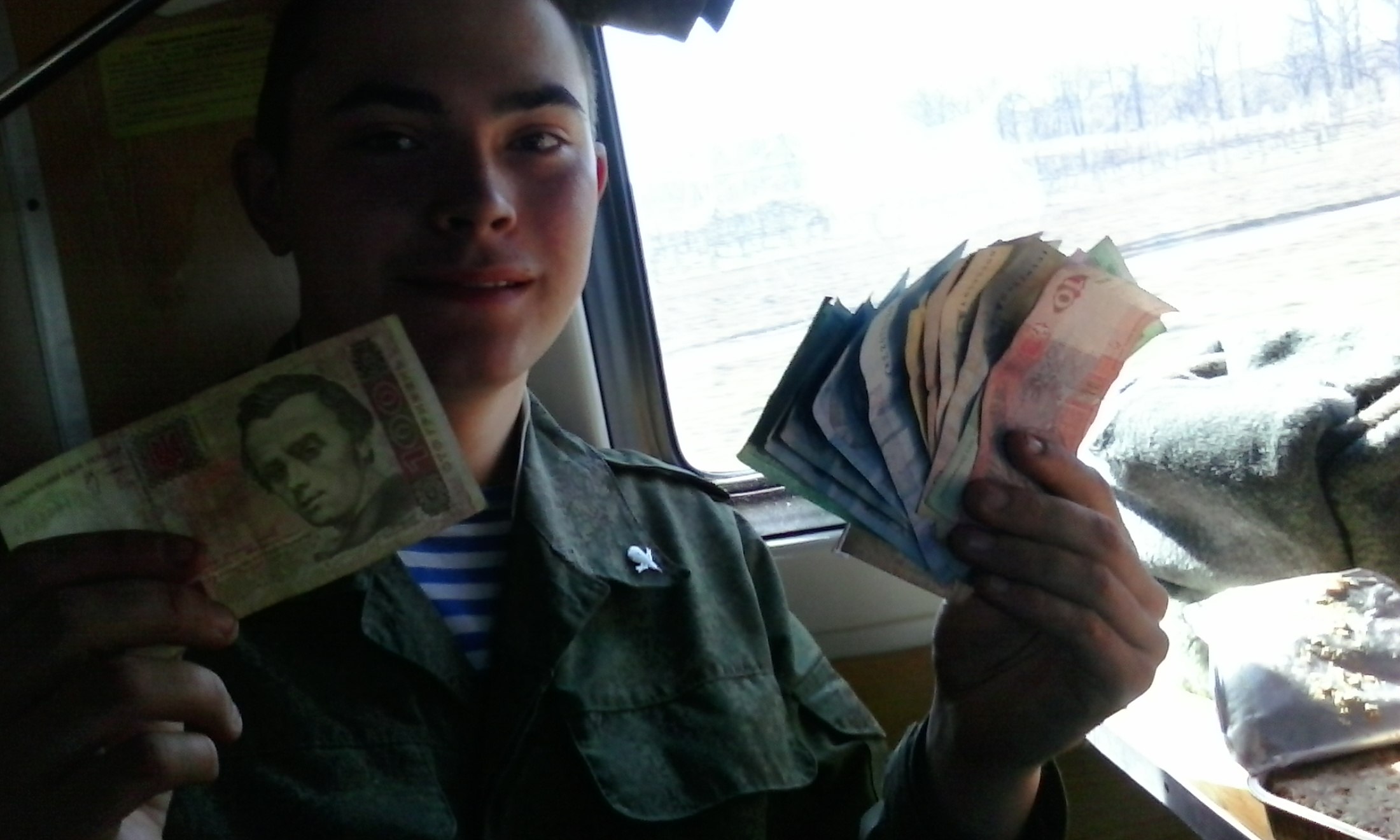 On May 9, 2014, Artiyev posted a photo of his medal for the occupation of Crimea. 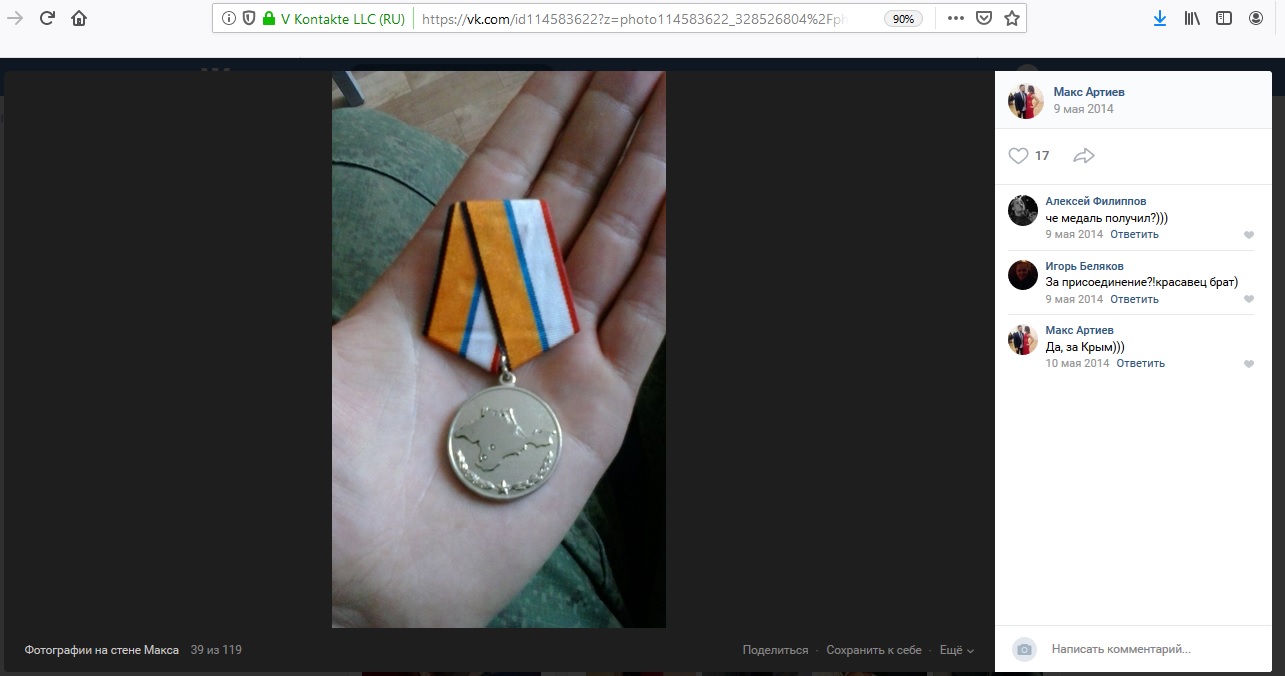 A conversation in the comments under the photo:

Filippov: Hey, you got a medal?

Belyakov: For the accession?!

Artiyev also posted a photo of a train ticket from Novorossiysk to Murmansk which he took to travel home after demobilization. 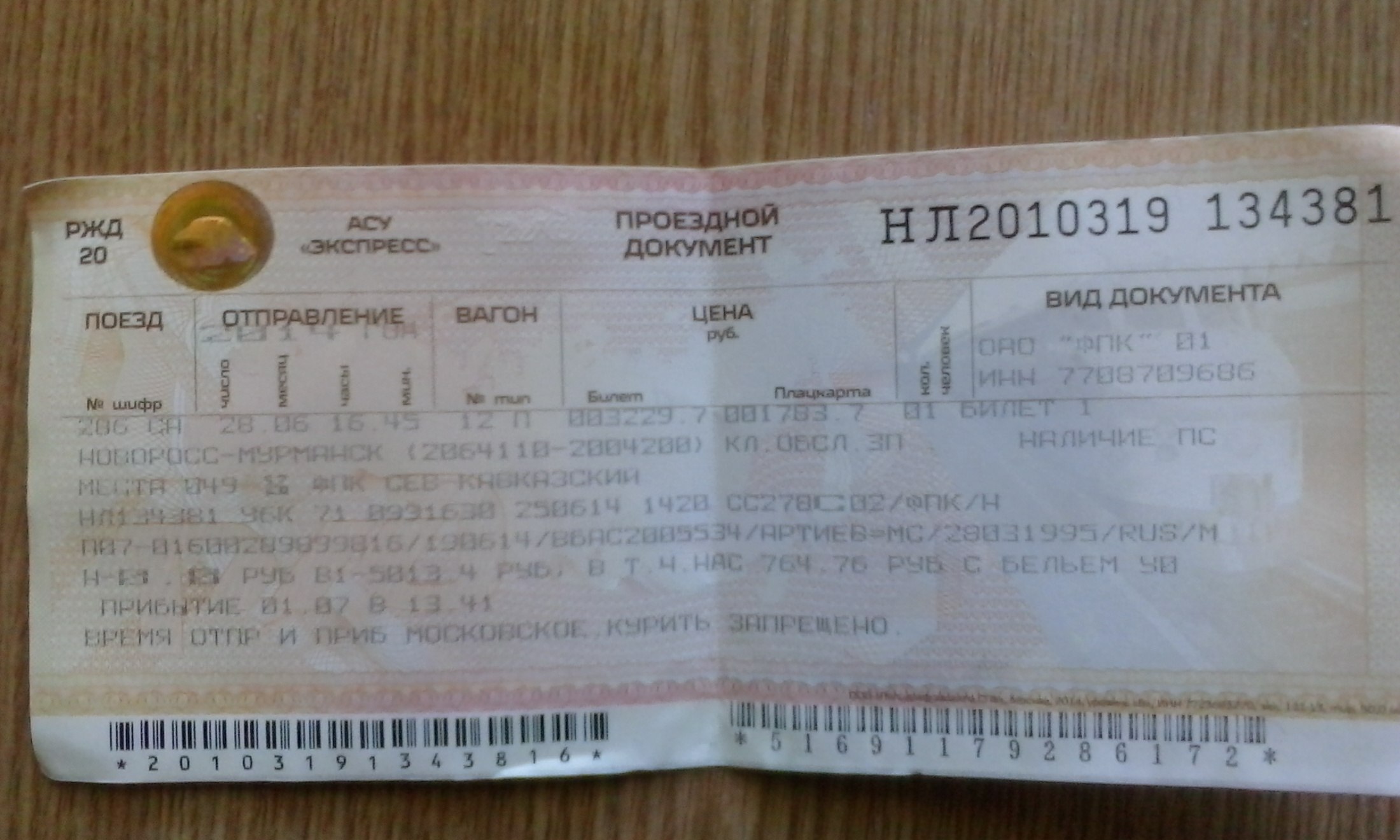 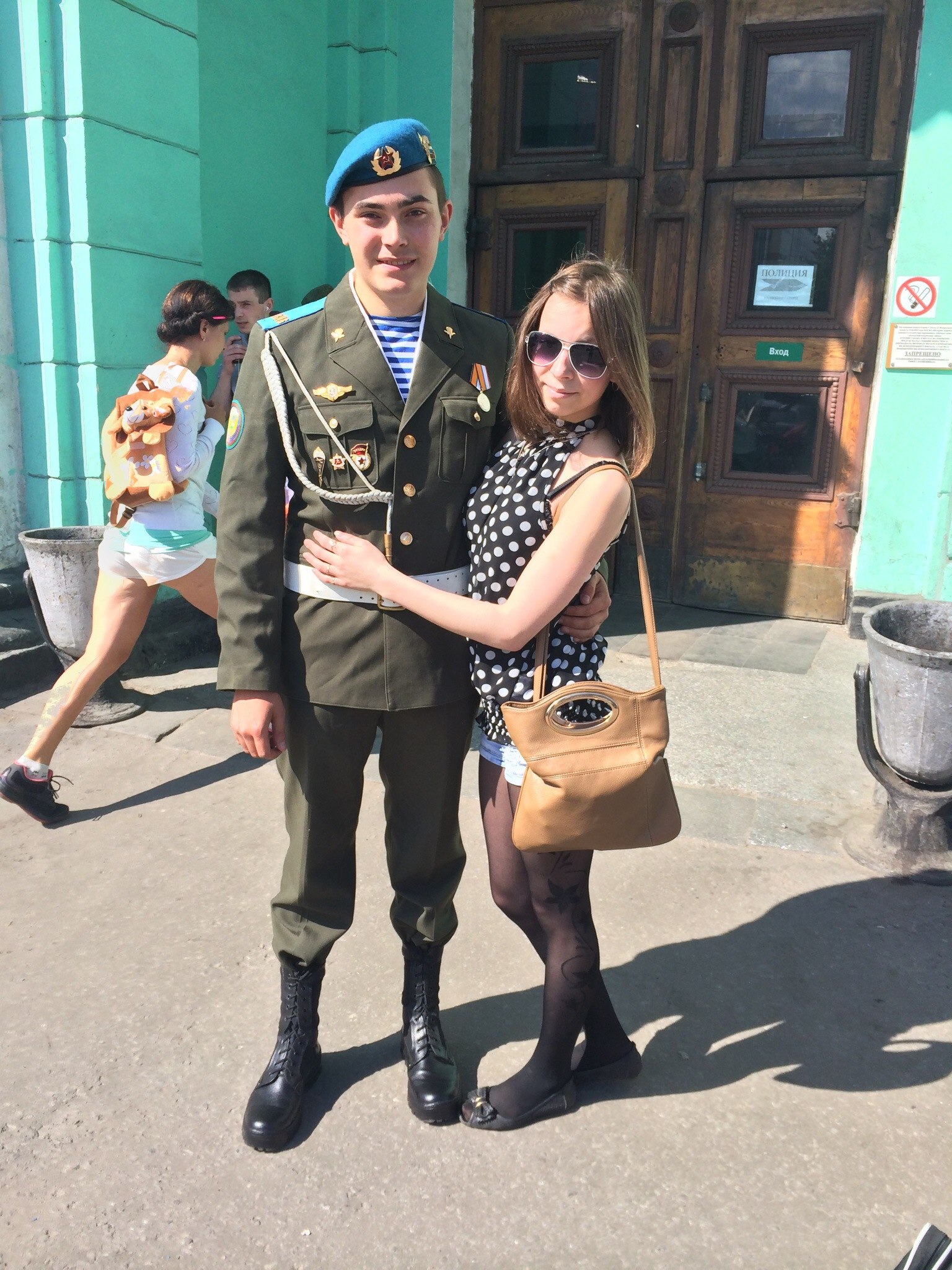 The following screenshot shows that Artiyev indicated his duty station: at the bottom of the photo there is an inscription “108 AAR (g)”, and a commentary to the photo says “my regiment…”. 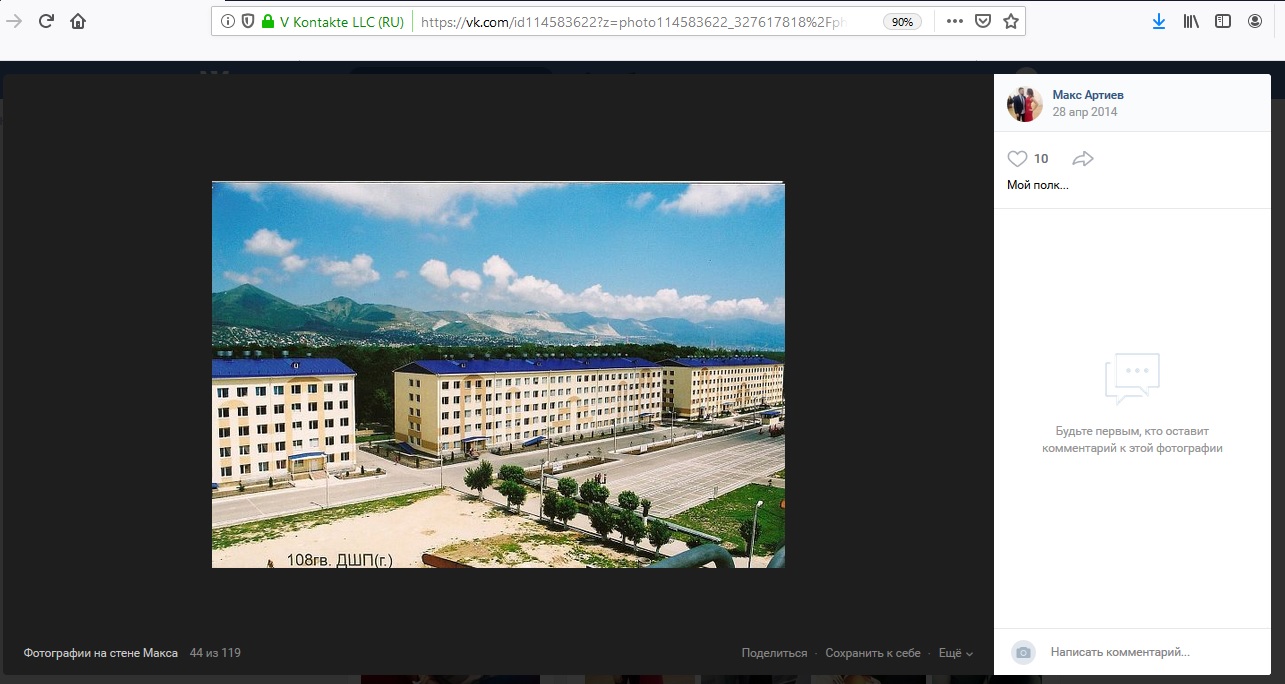 The place of service is confirmed by a letter of gratitude to his parents from the commander of the military unit 42091, Colonel M. Baikulov. Military unit number 42091 points to the 108th AAR of the 7th Air Assault Division. Permanent deployment point of the 108 AAR is Novorossiysk. 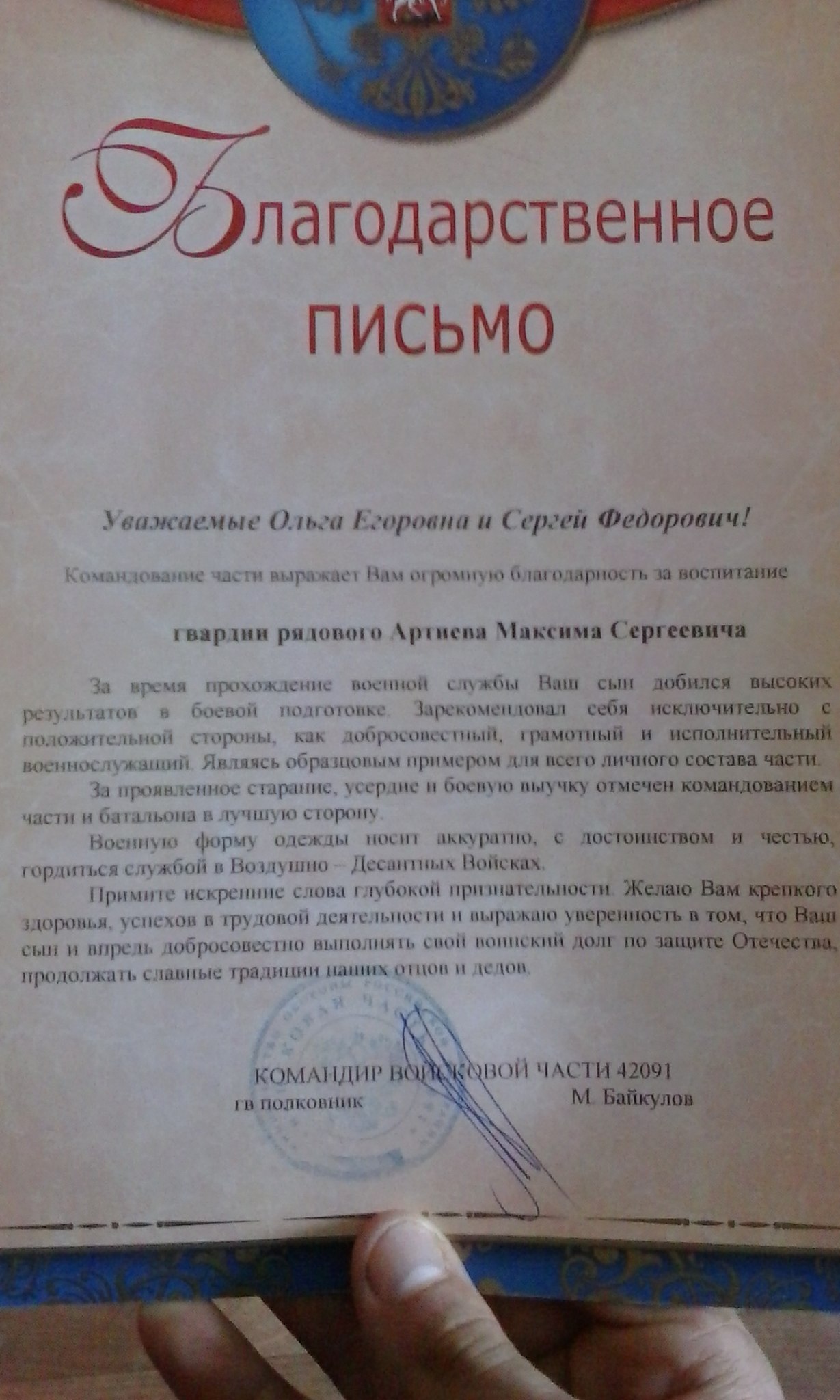 We wrote about Colonel Murat Baikulov in detail in our first article about the 108th AAR.

Artiyev served in the 108th AAR first as a reconnaissance operator, then as a gunner of Pecheneg machine gun, as evidenced by his comments to the following photo: 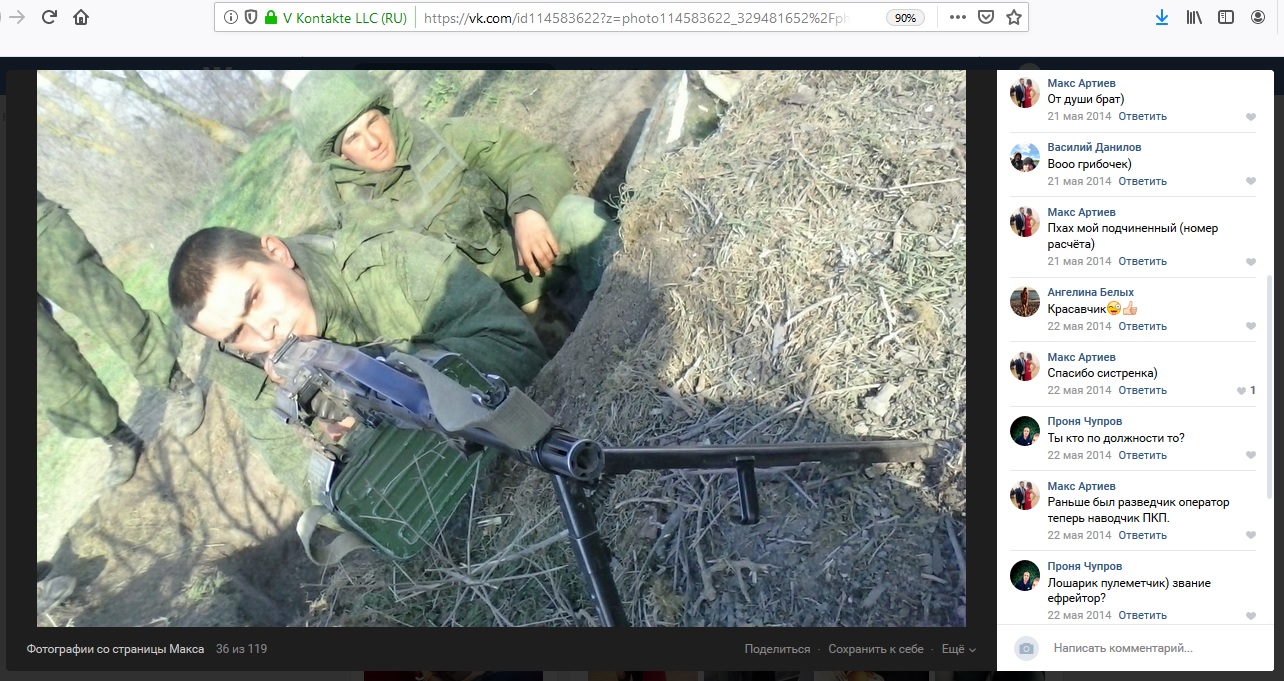 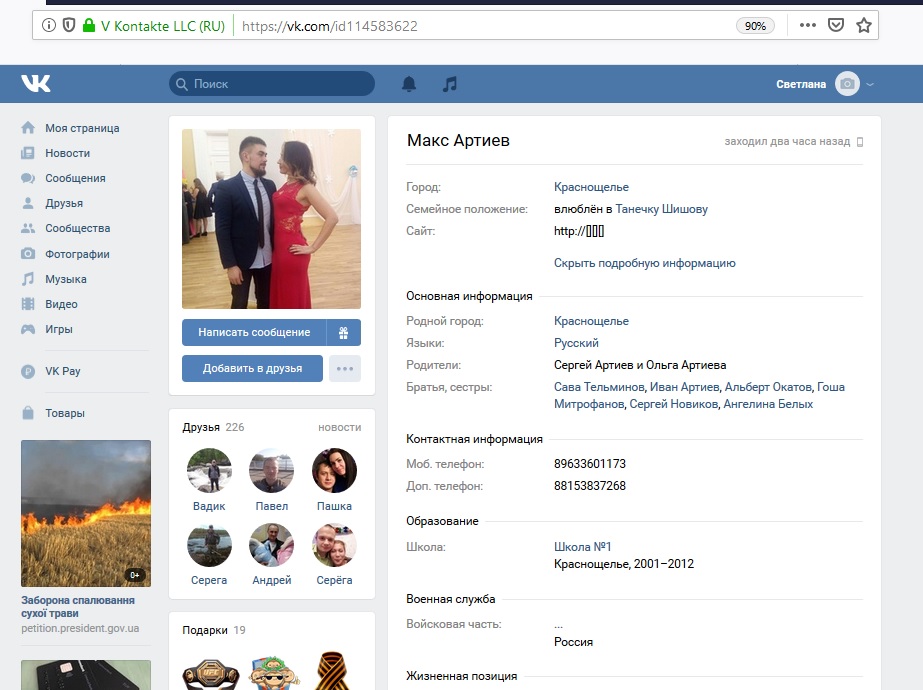 This is a village in the Lovozersky raion of the Murmansk Oblast. The place of residence is also confirmed by the train ticket we mentioned above, the point of arrival on it is Murmansk.

In February and March 2014, Putin’s “green men” were hiding under the masks and uniforms without insignia. Each publication of InformNapalm’s OSINT research reveals the names and personal data of specific soldiers and officers who carried out the Kremlin’s criminal orders. The blame for the outbreak of war, the annexation of sovereign territory and the tragedy for the families of millions of Ukrainians who have lost their homes lies not only with the military and political leadership of the Russian Federation, but also with each of these soldiers and officers, who will sooner or later bear responsibility for their crimes.

The war in the Donbas was a continuation of the Crimean tragedy and a consequence of Russia’s aggression against Ukraine. The same units of the Russian Armed Forces that seized Crimea were subsequently spotted in the Donbas. By swallowing the annexation of Crimea the international community played a part in freeing Moscow’s hands for further war and the death of thousands of Ukrainians. If international pressure on the Russian aggressor weakens, Russia will continue its hybrid war and expansion into Europe. Therefore, it is important not only to increase the sanctions pressure on Putin and his entourage, but also to impose sanctions against every serviceman or mercenary of the Russian Federation who took part in the aggression.

The OSINT investigation was prepared by the monitoring service of the Belarusian editorial team of InformNapalm international volunteer community. Translated by Julia Ponomarenko, edited by Artem Velichko.

No Responses to “Identified: personal data of paratrooper and scout of 108th Air Assault Regiment who participated in seizure of Crimea”