Risks of a coup in Ukraine 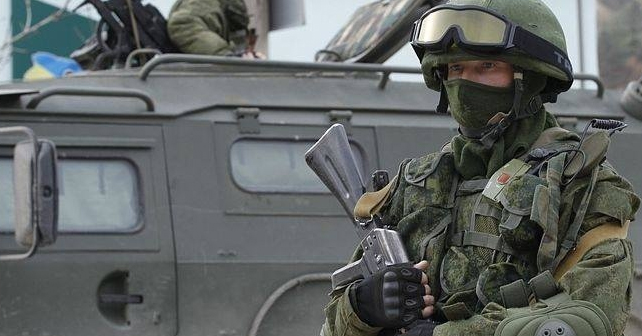 At the time of the transfer of power in the US after the presidential elections Russia is planning a set of measures aimed at triggering a coup in Ukraine. They will include external destabilizing factors, attempts to gain autonomy in some regions and deterioration of support of Ukraine in the EU.

The results of elections in Bulgaria and Moldova as well as preparations for the elections in a number of key EU countries (Austria, Germany, France) will contribute to the decline of the solidarity with Ukraine.

The analysis of the information collected through OSINT and HUMINT suggests a high probability that beginning on January 1, 2017 there will be surge of activities in Odessa Oblast aimed at the creation of an autonomous region in the area that would be granted a special status. There can be progress on this project within the framework of the so-called Republic of Budjak, which was launched unsuccessfully in 2014. It is expected that pro-Russian regional organizations and opinion leaders affiliated with the Kremlin will be responsible for this.

Similar work is in progress in Zakarpattya. According to the documents of SurkovLeaks, the Kremlin continues its activities in this region. This is the riskiest area, since destabilization of the situation in this region is possible only through armed provocations with civilian victims. There had been some attempts to test the likelihood of destabilization in the region in October 2016. Further actions are planned in the form of economic and ethno-cultural demands.

It is expected that in parallel with destructive activities in Ukraine, several EU member states will be engaged to block Ukraine’s efforts for euro-integration. The main objective pursued by the Russian intelligence is to delay the visa-free regime by at least a year. This time will be used for attempts to replace the government in Ukraine. The government will be blamed for the failure of the visa-free travel to EU. The best-case scenario for the Russian intelligence and diplomacy would be a negative decision of the Dutch government on Euro-association of Ukraine.

If this plan is successful, “the foreign policy defeat” will be represented as a result of the failed policies of the current government. The Kremlin believes it possible to repeat the scenario of 2013 and to mobilize people for a protest against the failure of the European integration.

Economic issues will be used for further mobilization of protest groups. In the middle of September, Russian security services received the forecasts of a number of US financial analysts (according to unconfirmed reports, representatives of the Big Four accounting firms) about the economic impact of large-scale protests in Ukraine. Mass actions lasting more than a week are expected to provoke panic in the banking market, reduce investments, and cause increases in the prices of food items. The macro-economic targets of the mass protests are as follows (week, month, quarter): inflation (+2%, +7%, +34%), hryvnya exchange rate against the dollar (+27, +29.4, +50); GDP (-0.1%, -0.2%, -5%). 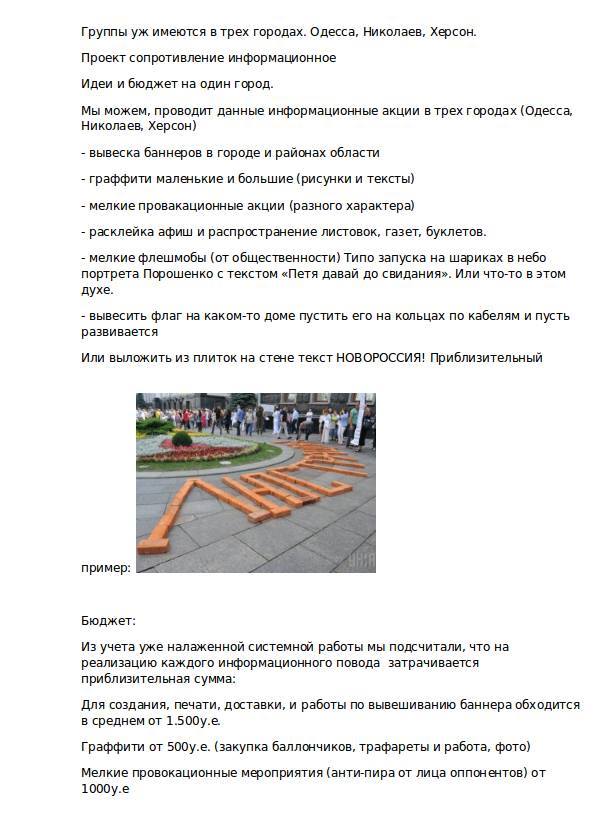 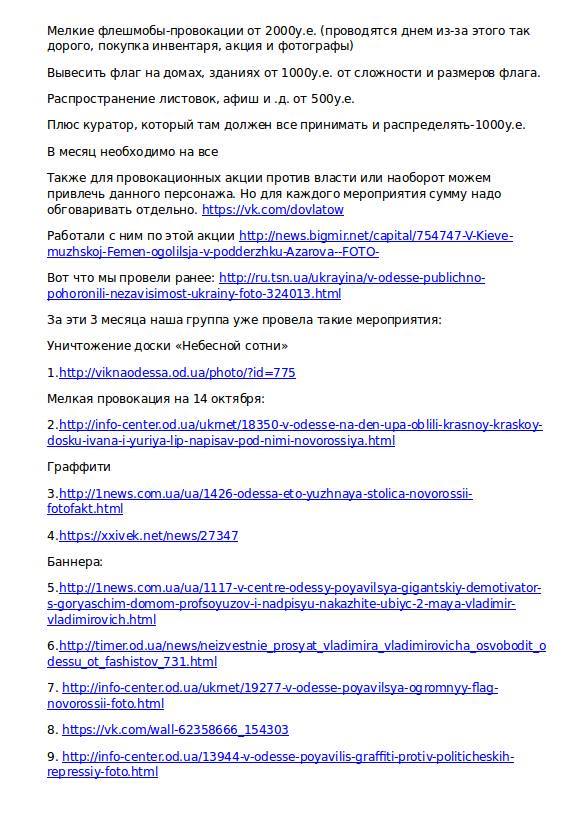 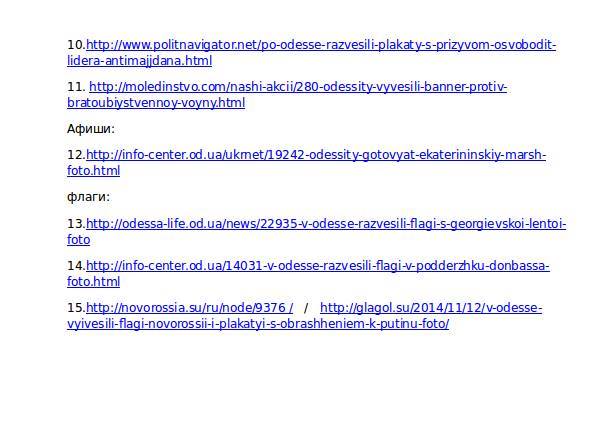 Offers of “special services” with a price list. Documents from the mailbox of a functionary in the Administration of the President of Russia.

Political destabilization should result in the freezing of cooperation with the IMF and derail the government bond ratings. It is very important for the Kremlin to induce a default in Ukraine. This strategy is believed to bring to power the pro-Russian forces in Ukraine. Those forces should make an agreement with Moscow on granting stabilization aid to the new regime that would lead to a strict dependence on donations.

The sharp deterioration in the economic situation as a result of mass protests will further increase the mobilization of the protest population. At the same time the Kremlin believes that blocking state institutions will not allow regulators to moderate the situation, which will increase negative pressure and increase the effectiveness of actions. Thus, the provocation of a sharp deterioration in the socio-economic situation will strengthen the public discontent, and, as expected in Moscow, it will be directed at the political leadership of Ukraine.

As in the Republic of Moldova at the time of the attempted coup on January 14, 2016, it is planned to unite pro-Russian political forces with the leaders, who declare support for the pro-Western course. Therefore, despite their ultimate goal, the activities will not use pro-Russian slogans, maintaining foreign policy neutrality at the early stage.

According to our estimates the repeat of “Maidan” scenario at the current moment is unlikely. Protest movements initiated by the Kremlin can only serve as a cover for drastic actions for violent overthrow of the government by forces arriving from Russia.

Among the steps that could foil Kremlin’s plans are: suspension of diplomatic relations, ban on air and rail passenger travel, restrictions at border crossings, provisional authority over Russian banks in Ukraine.

The analysis has been prepared specially for InformNapalm by Anatolii Baronin, an active link to the original publication is obligatory for any reprint or further public use of the material.

Paid “activists” going to the rally at the National Bank of Ukraine in Kyiv on November 15th. For 5 hours of manifestation one received 125-140 hryvnia.

The typical behavior of the “protesters” was aggression towards journalists and avoidance of any discussions on the purpose of manifestation. The organizers responsible for maintaining the lists of participants and distribution of money were spotted.

No Responses to “Risks of a coup in Ukraine”