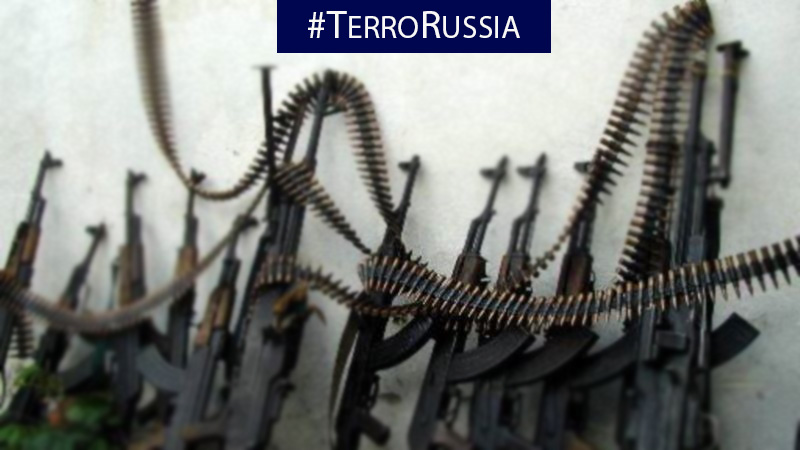 The exports of black and gray arms represent between 5-15% of total weapons exports from Russia. For example, when the official exports of weapons and military equipment from Russia amounted to $3.8 billion in the early 2000s, the black and gray export was closer to  $380 million.

In reality, illegal arms sales from Russia could be much higher, and they include countries  subject to a weapons embargo and areas of armed conflicts. The revelation of Venezuelan President Hugo Chavez’s plans to supply militants from the terrorist organization FARC, operating in Colombia, with Russian weapons set off one of the biggest International scandals of modern time (lenta.ru/news/2008/05/12/documents). It is unlikely that this could have happened without Russian knowledge.

Later, the government forces in Colombia began to get Russian machine guns seized from the FARC gangs and local drug traffickers.

Africa became another, even larger market for illegal Russian arms. These channels of illegal flows from Russia were established because the UN prohibits the supply of weapons into armed conflict zones on the continent.  Tenerife became the largest transit point of Russian weapons on the way to Africa, but Moscow also didn’t abstain from delivering arms supplies under the guise of humanitarian goods.  This operation would not have been possible without the assistance of Russian authorities, as it doubtless involved bribing government officials in several countries.

Journeys of the vessel Arctic Sea have attracted the world’s attention to the issue of Russian arms on the black market (https://en.wikipedia.org/wiki/MV_Arctic_Sea). According to one version, the ship had cruise missiles on board.  The threat of their illegal arms-smuggling channel being exposed forced the Russian authorities to cover the operation by staging the vessel’s disappearance and hijacking.  According to an official statement, Arctic Sea was going to Algeria, but there is a real possibility that it had planned to stop in Tripoli to unload the undeclared cargo. The recent detainment of a Russian plane loaded with weapons in Nigeria suggests that smuggling to the hot spots on the African continent was also carried out under the guise of humanitarian aid.

Southeast Asia represents another market for illegal Russian arms. Here, the Russian authorities acted through illegal intermediaries. One of them, a Russian citizen named Viktor Bout, was arrested in Thailand and extradited to the US, where he is serving a 25-year prison sentence for selling weapons to Colombian drug traffickers (https://en.wikipedia.org/wiki/Viktor_Bout).

Russian merchants of death also have a large-scale operation in the Middle East.  Russia was accused of supplying arms to terrorist organizations such as Hamas, IG and Hezbollah, with the ruling Assad regime in Syria acting as an intermediary.

Syria has been in a state of civil war for more than three years with rebels trying to overthrow the pro-Kremlin regime.  Since the beginning of the war, the Russian arms supplies to Syria have grown exponentially. Moscow officially claims that deliveries are made on previous contracts, but it cannot explain why the number of these contracts suddenly increased many times over. In this case, there is real doubt that the weapons contract are paid for, since it is no secret that the Assad regime is bankrupt and unable to buy the mountains of weapons  supplied over these years from Russia, including small firearms, anti-aircraft and anti-ship missiles, C-SAM (ZRK S-300), tanks T-72 and T-80, and MiG-29 and Su-25 aircraft. And that doesn’t even include the cost of ammunition.

Some of the weapons are shipped directly to the terrorist group Hezbollah. Even though the entire civilized world recognizes Hezbollah as a terrorist organization, Russia doesn’t consider it as such. In addition, Hezbollah leaders are frequent guests in Moscow.  During the time of its existence, the organization has committed hundreds of terrorist attacks, including those against Russian citizens.  At the same time, the party Hizb-ut-Tahrir, which has not committed any terrorist acts in Russia during the 50 years of its existence, is on the list of terrorist organizations.  This raises questions about the criteria by which Russia compiles its list of terror groups.

Israeli intelligence agencies have repeatedly implicated the Kremlin in the supply of weapons to Hezbollah including rockets, ammunition and small firearms.  In fact, the IDF has actively prevented several Kremlin plans for armament of Hezbollah brokered by Assad. Israeli aircraft have repeatedly destroyed the anti-aircraft missiles S-300, anti-ship missiles Yakhont, and ground-to-ground missiles on Syrian territory that were intended for Hezbollah. The most recent such attack occurred a few days ago (http://joinfo.ua/inworld/1058035_Armiya-Izrailya-razbombila-rossiyskie-ZRK-S-300.html).

Recently, Israeli forces seized Russian-made weapons, the ATGM Cornet, from Hamas militants in the Gaza Strip. Presumably, these deadly weapons were smuggled into Gaza on the Russian ship carrying humanitarian aid. The Israeli Coast Guard apparently did not search the Russian cargo, but the Russian officials clearly are not trustworthy.

Moreover, Russian smuggling in the Middle East is not limited to the supply of weapons to Hamas and Hezbollah. There are reasons to believe the Kremlin is also supplying weapons to the terrorist group ISIS.  For a long time, ISIS fought against Assad through proxies, attacking mainly Syrian rebels, Kurds and Sunni insurgent groups.  They operated largely along the Syrian and Iraqi borders with Turkey, near the routes of future oil and gas pipelines to Europe.  Russians could not transfer weapons to militants openly, because it officially recognized ISIS as a terrorist organization. Then there was a scam—a series of staged assaults by militants on the bases of Syrian government troops. Assad’s army retreated without a fight, leaving the entire base along with loads of weapons.  Hence, this was a way to deliver arms under the guise of trophies.  It is noteworthy that when the relationship between ISIS and the Assad regime went sour, attacks on government troops became violent and the weapons were destroyed.

Similar tactics were deployed in Iraq, where government troops left to ISIS their armories along with new Russian BTR-90 weapons almost without a fight. The militants found drivers instantly, because some members of the group were immigrants from the former Soviet republics.  We can only assume that they had been taught to drive these vehicles specifically for this mission.

In light of these events, we can deduce that the Putin regime supplies terrorists in the Eastern Ukraine region of Donbass using the same methods: “humanitarian convoys,” deliveries of weapons and equipment later claimed as trophies, or smuggling.

The current Putin regime in Russia can be considered an accomplice of terrorist enclaves around the world.

One Response to “Russia and International Arms Trafficking”