On the Brink of the Invasion. Russian MVD Procurement in January 2014

From the very beginning of the War in Donbas the Russian propaganda rhetoric worked to ensure that this conflict is ‘purely internal’, that this is a ‘civil war’ in which “the people of Donbass rebelled against Kiev junta” and that this was a result of a “military coup, created via the Maidan”. Such a cliché is used to brainwash population of the Russian Federation, as well as the people living in the occupied Crimea and the Donbas. Yet, this neat theory collapses as the facts of thoughtful and strategic preparation of the Russian aggression against Ukraine emerge.

The preparation of invasion began long before the events on Maidan. We have previously published some information about preparation of the annexation of Crimea in 2004. Russian economist Andrei Illarionov, former adviser to the President of the Russian Federation in 2000—2005, founder and president of the Institute of Economic Analysis, commented:

“The idea of annexation of Crimea appeared at least in 2003—2004. Putin perceived his defeat in 2004 [the so-called Orange Revolution in Ukraine] very painful and vowed to prevent its repetition. This time the plan was drawn up with several options.

A military version is called “The Clockwork Orange”. Putin set aside this plan only to use it in case of an emergency. The military option is always very expensive, so preferred methods to achieve this goal would be military and political means, blackmail, bribery, and so on. They are much more familiar to Mr. Putin. This is what he had been taught by the KGB.”

But this is not the only evidence of Russia’s preparations to the hypocritical war against Ukraine. InformNapalm team found more information, this time from the field of state procurement.

In January 2014, Russian journalist and human rights activist Oleg Lurie published an entry in his blog in which Mr. Lurie discussed Russian Ministry of Interior intention to buy 42 Ural trucks, equipped for carrying mortars. According to his blog, trucks had to be shipped to Saint Petersburg, Rostov-on-Don, Yekaterinburg and Khabarovsk. Mr. Lurie raised the question of military preparations by the Ministry of Interior. He published a document, confirming that the Interior Ministry ordered 42 trucks of Ural-43206-0651 model (biaxial, a military modification with a double cabin), equipped to transport a 120-mm 2B11 mortar in the ‘Sani’ assembly option which includes a mortar, a wheel cart and a tractor. The total cost of the order was 42 trucks for 144 million Russian rubles (mind the ‘old’ exchange rate).

Here is how Ural-43206, equipped to transport wheeled 2B11 mortar with 2L81 wheel cart looks like: 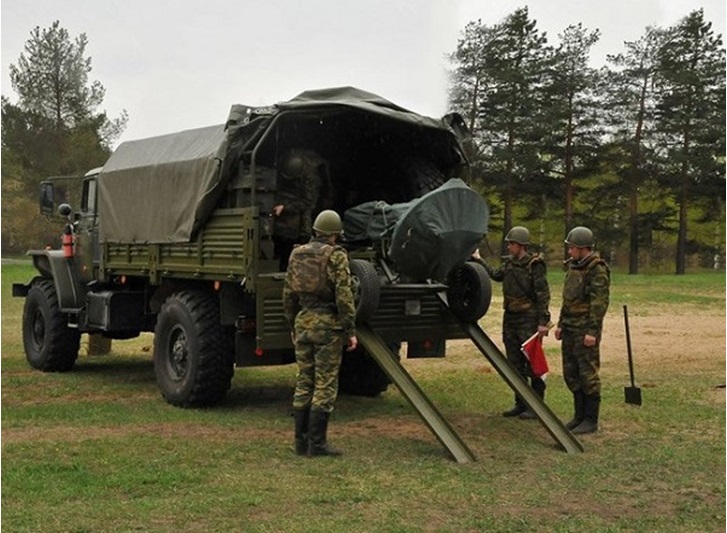 At the time Oleg Lurie and his readers become familiar with these documents, the question arose: “why does Interior ministry need mortars?” Clearly, if the Interior ministry buys trucks for mortars, the mortars themselves are already available or will be purchased soon. The simplest answer, that appeared at that moment, was the use of the equipment in Chechnya. But if we go further, we can find Ministry of Interior bases, to which these trucks were planned to be distributed.

There are four of them:

If we consider the location of the supply bases, it turns out that they are selected considering the location of the headquarters of the corresponding Russian military districts. St. Petersburg is Western Military District, Ekaterinburg is Central Military District, Khabarovsk is Eastern Military District, and Rostov-on-Don is Southern Military District. And now look at the number of equipment, distributed among the bases. Khabarovsk receives only one truck. It is probably to fight illegal immigrants from China [humor intended]. St. Petersburg and Yekaterinburg were more fortunate to get 6 cars for each city. But Rostov-on-Don receives as many as (!) 29 units. It looks like the ‘Chechen version’ is confirmed. But there is a couple of things that cause questions:

Yet while the troubled Republic of Ichkeria is quite far from Rostov-on-Don, Luhansk and Donetsk Oblasts of Ukraine are as close as 100 km. If our assumption is correct, then the date of the order placement (December 2013) means that the invasion scenario was drafted before the Russian annexation of Crimea.

Based on the foregoing, it turns out that not only Russian political leadership, but the leadership of its interior ministry were familiar with the plan of the post-Soviet redistribution of lands by the end of 2013. However, the interior ministry did suspicious purchases before that as well. For example, back in 2012, the law enforcement agencies of the Russian Federation bought 250 kg high-explosive bombs. And now let us track the destiny of these purchases in the area of the Anti-Terrorist Operation (ATO) in Ukraine.

Previously, we have reported a lot of photo and video evidence of the Russian weapons supply to terrorists. A story of the 2B11 ‘Sani’ mortar systems and Ural trucks is no exception. ‘Sani’ are used by Russian ultranationalist group ‘Rusich’ (also known as the ‘Batman’ Brigade), participating in the War in Donbas and connected to Ministry of Internal Affairs of the Russian Federation [editor’s note: the original Russian text of the article was written before separatist leader Alexander ‘Batman’ Bednov was killed together with several of his guards allegedly by Russian spetsnaz for refusing centralization of the separatist armies in Luhansk Oblast and ignoring commands of the Moscow-appointed ‘head’ or Luhansk People’s Republic Igor Plotnitsky]. 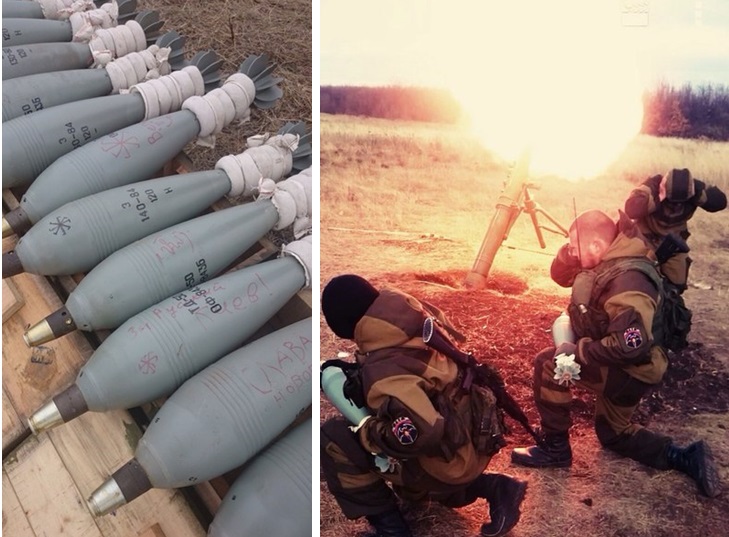 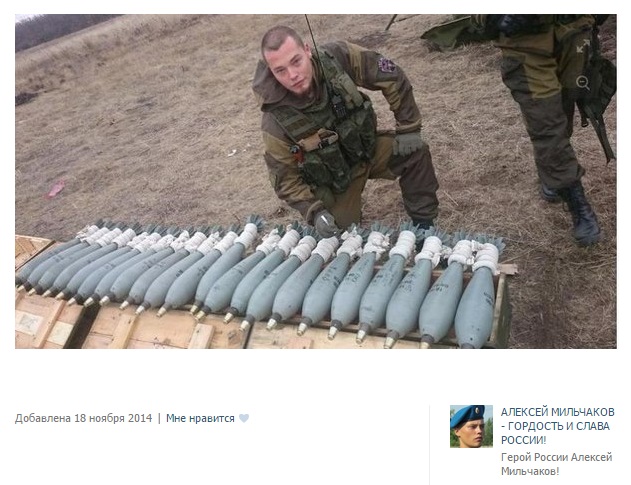 As a further proof, let us check the video, taken by one of the propaganda channels of Luhansk People’s Republic. 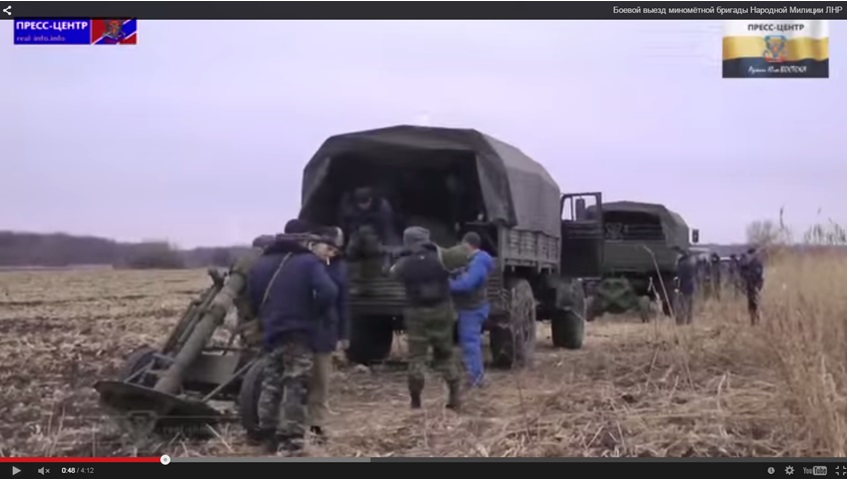 This convoy of so-called ‘people’s militia’ includes two Ural-43206s (biaxial, the army version, single cab) and three 120-mm mortars. Even taking into account the fact, that the conventional ‘not police’ version of Ural used to cost not 3.5 million ($115,000), but ‘only’ 1.5 million of ‘before sanctions’ roubles ($50,000) the cost of this convoy, including mortars without ammunition, is approximately 9 million roubles ($300,000).

Based on this information, here are my questions: 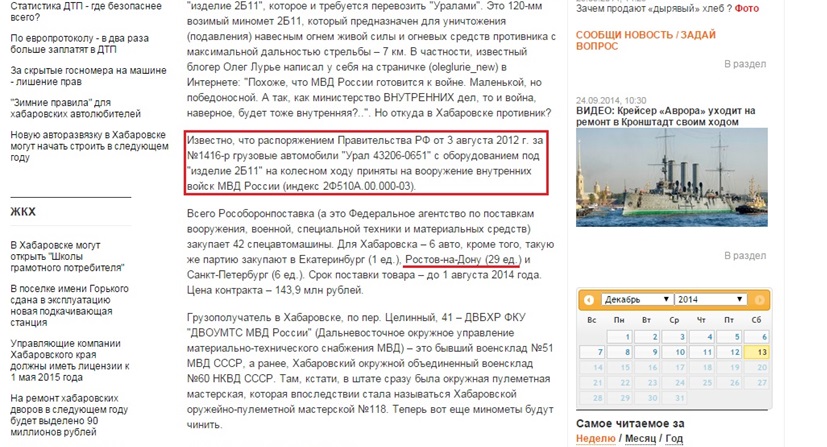 It is worth noting that due to the change of the mortar tractor the Russian military had to redesign mortars. This upgrade came only to the Russian army: GAZ-66 was replaced with Ural-43206. It might seem a trifle, but this change has led to the emergence of a new letter in the mortar assembly:

The terrorists of Donetsk People’s Republic and Luhansk People’s Republic are using the Russian modernized complex, exactly with a letter A and the towing vehicle Ural-43206. In addition, due to use of the swivel head mounted at the base of the mortar tube, this modernization allows to conduct fire without the base plate installation. The terrorists, as we can see, have this version of the mortar. 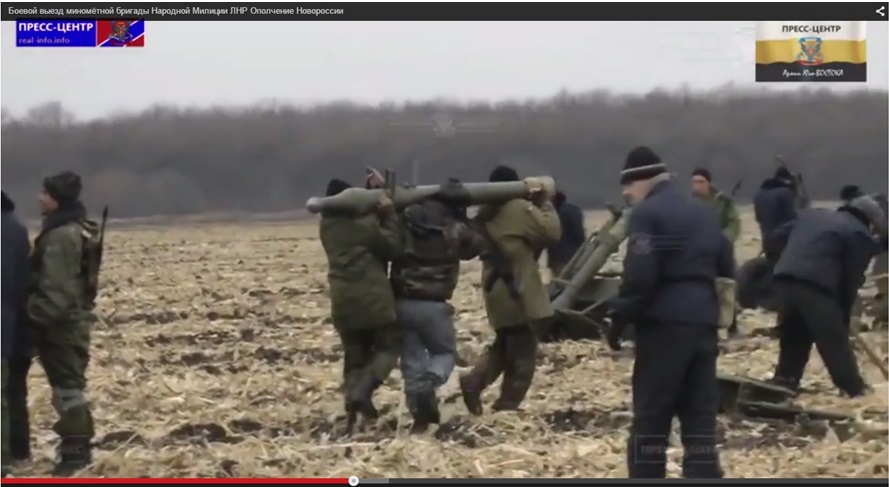 Thus the Russian invasion is far from spontaneous, no matter how Russian propagandists try to present it. This operation is carefully and comprehensively prepared, so justification based on “protection of the Russian-speaking population” or “war with Kyiv junta” is nothing more than a mask to conceal the real circumstances and plans of military aggression.

This article was prepared by an expert on video monitoring Al Gri and war correspondent Roman Burko exclusively for INFORMNAPALM.ORG. We publish only exclusive information and analytical materials. If you reprint our articles, you must use an active link to the source.

No Responses to “On the Brink of the Invasion. Russian MVD Procurement in January 2014”