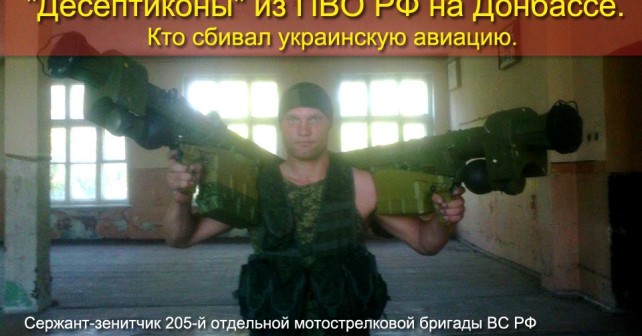 According to the report of the Information Resistance from June 5, 2015, the WorldConflictFilms web portal had published video June 4, 2015, that was filmed from the Ukrainian military helicopter which was shot down in the Donbas in August 2014.
The video was filmed from the cockpit of the helicopter and captured the moment of its crash. Judging from the terrain, time of the year and the visible part of the helicopter cockpit, it was a Mi-24 helicopter of the Armed Forces of Ukraine, which the “militants” had shot down August 20, 2014 near Heorhiivka village in the Lutuhine district of the Luhansk region. Two pilots were killed as a result of the attack then: the armed Forces of Ukraine Captain Anton Rodionov and Major Oleh Biriuk. Their bodies were immediately evacuated. The information about the crash of the helicopter was also published on Facebook page of volunteer Heorhii Tuka August 21, 2014. The statement read: “N.Kalinov MI-24 crew was shot down at a height of six meters. The aircraft exploded in the air. The surface-to-air missiles (SAMs) are useless at such heights. Moreover, the SAMs cannot make the aircraft explode. The aircraft was most likely hit by a missile launched from a MANPADS at point-blank. The downing was committed by an expert. The command had the information that there were little green men spotted in that area.”

The investigation has identified one of those “air defense officers of Novorossiya” – Sergeant-antiaircrafter from the 205th Separate Motorized Rifle Brigade (military base No. 74814, Budennovsk, Stavropol) of the 49th Field Army of the Southern Military District of the Armed Forces of the Russian Federation Sergey Polkanov (archive). After studying his friendly contacts, it was found that Polkanov participated in exercises at the Ashuluk military firing range (the Astrakhan region of the Russian Federation) as part of the anti-aircraft detachment of the 205th Motorized Rifle Brigade as of early August 2014.

Apparently that’s where he was sent on a mission to Ukraine from. It was evidenced by the message posted on social network on the page of activist Andrey Kalikh, which read: “Commander of 205th Brigade of the military base No. 74814 Major General Yury Donskih announced before the unit formation at the Ashuluk military firing range August 27, 2014 that the contractors must go on a tour of duty to the military firing range in the Rostov region. Then he ordered those who did not want to go on a tour of duty to go front. About 50 soldiers went front. The General started using offensive language and humiliations directly threatening those servicemen: “I’m calling the representatives of the FSB, the military prosecutors!”

There are several images in Polkanov’s photo album indicating that he belongs to the Russian-terrorist troops: pictures, which have already become usual to us – on the state border of Ukraine with Russia in front of the border sign, as well as in front of the Tigr armored vehicle without registration plates, and wearing unconventional uniforms with white bands which identify militants of “Novorossiya”.

A number of photographs show that Polkanov’s main task during the so called tour of duty to the Donbas was providing of air defense to the Russian-separatist forces using a man-portable air defense systems (Igla MANPADS).

Other Polkanov’s pictures are also interesting: for example his photo on Mitsubishi L200, which Pavel Gubarev has also boasted with September 3, 2014. See the saved copy of the link (original video).

The characteristic feature of the vehicle is the improvised carrier for Utes heavy machine gun and additional seats mounted in the pickup’s bed.

And it could not go without decoration of Sergeant Polkanov for participation in hostilities against Ukraine. He was given the medal of the Ministry of Defense of the Russian Federation “For distinguished military service” in December 2014, signed by that same Major General Donskih, who had forcibly sent troops to the so called tour of duty to Ukraine.

It should be reminded that the Armed Forces of Ukraine have lost one AN-26 plane, one AN-30, one IL-76 transport plane, six Su-25 fighters, two MiG-29 fighters, one Su-24 supersonic attack aircraft, five Mi-24 and five Mi-8 helicopters during the conflict in the Donbas.