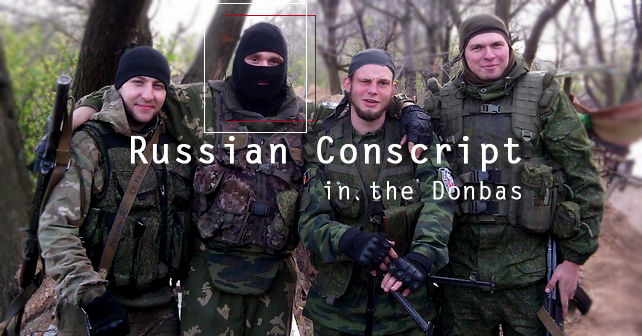 Russian Army conscript soldiers have not been seen in the Donbas since the battles of Ilovaisk and Debaltseve. But it turns out that some of them were present in the occupied territories in 2016.

In the course of monitoring of social media, one militant came to the attention of the InformNapalm volunteer intelligence community. After a detailed study of his profile, he was identified as Pavel Dykiy, born on 02.02.1992, a contract serviceman of the Russian 11th Separate Engineer Brigade (military unit 45767, Kamensk-Shakhtinsky, Rostov Oblast, the Southern Military District). Dykiy revealed not only his own presence in the Donbas, but also that of Alexey Teplykh, a conscript from the same military unit. Both men are war criminals who carried out illegal orders of the Russian senior military command.

Chronology of the identification

Here is a photo of Pavel Dykiy with a sleeve insignia of the Somali Battalion on his uniform and another one, posted by Pavel in his album called “DPR” (Donetsk People’s Republic). 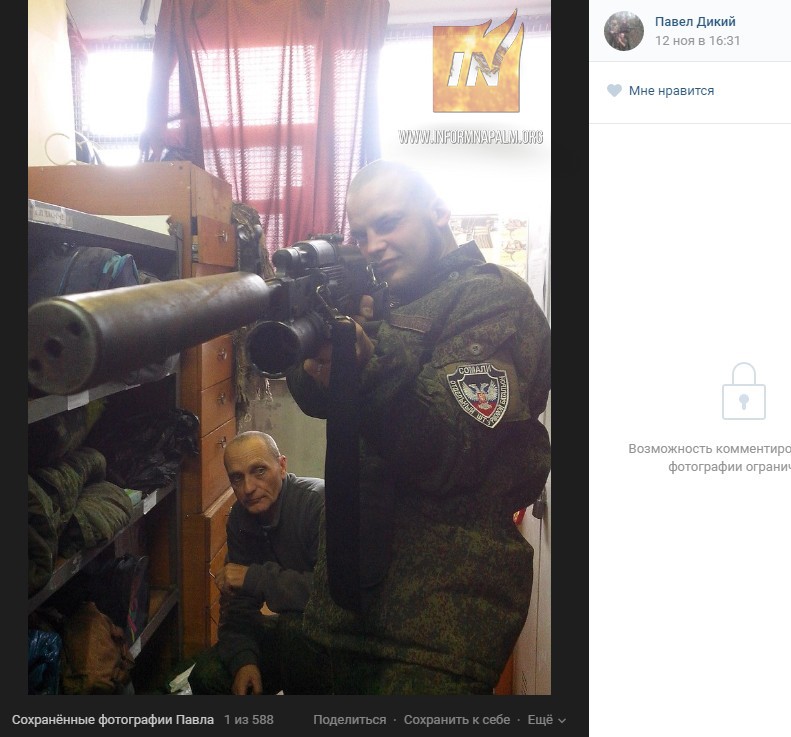 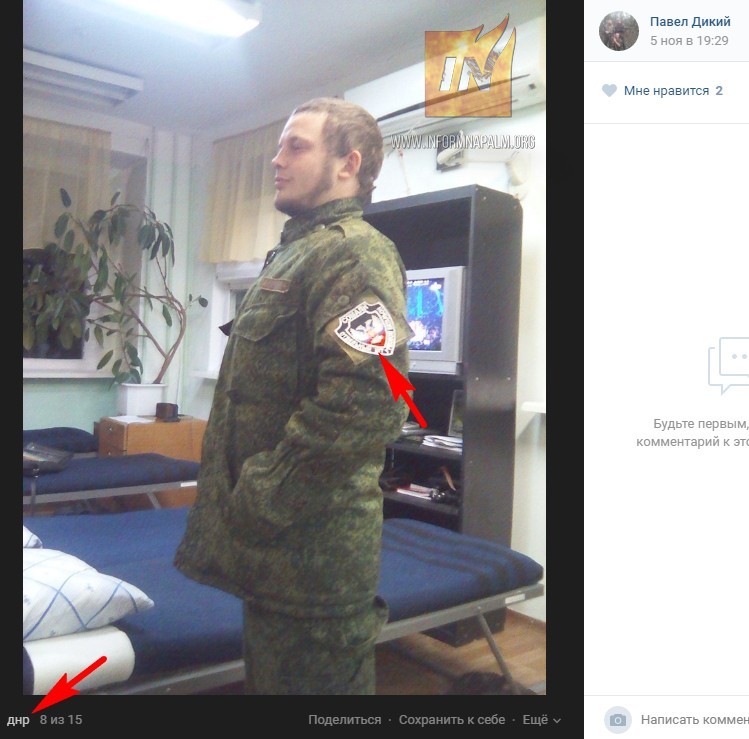 Here is a group photo for future identification. 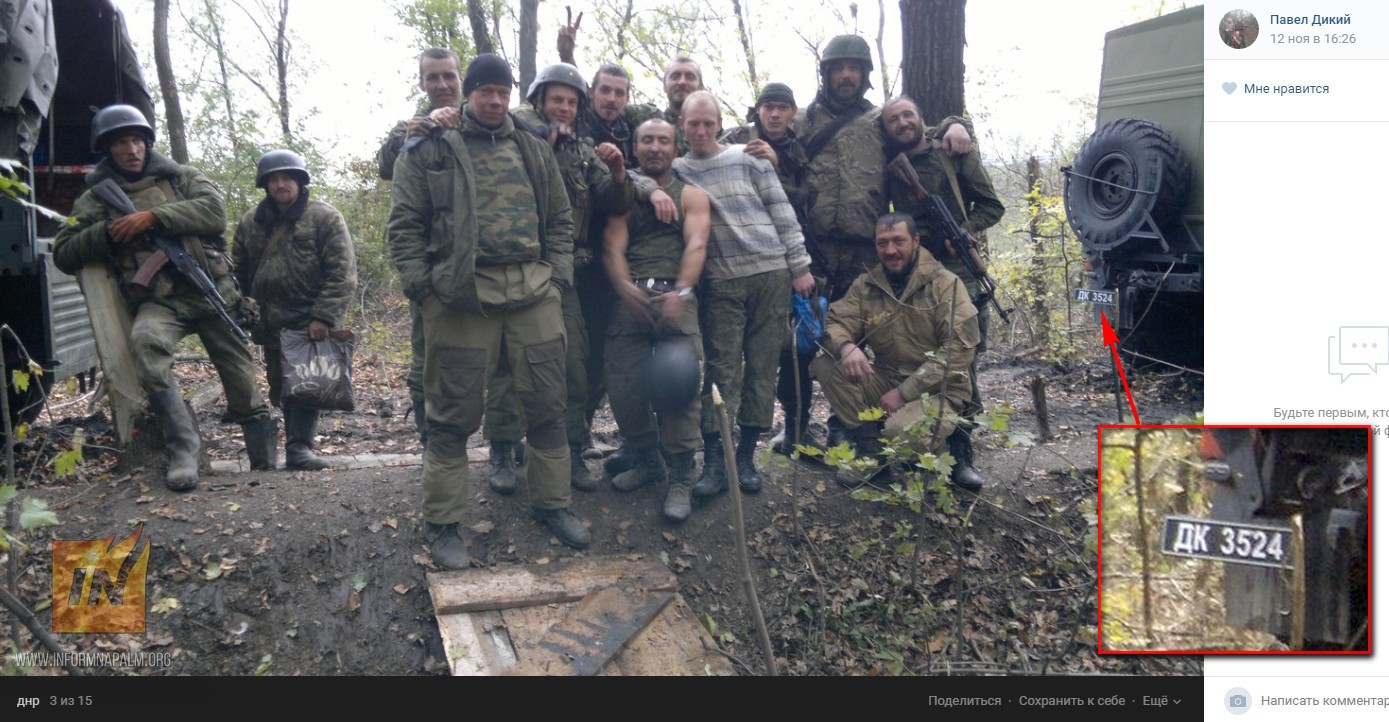 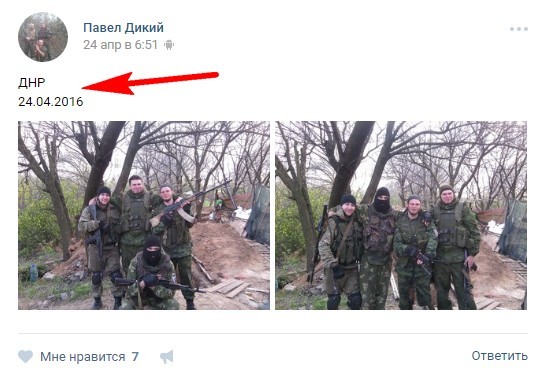 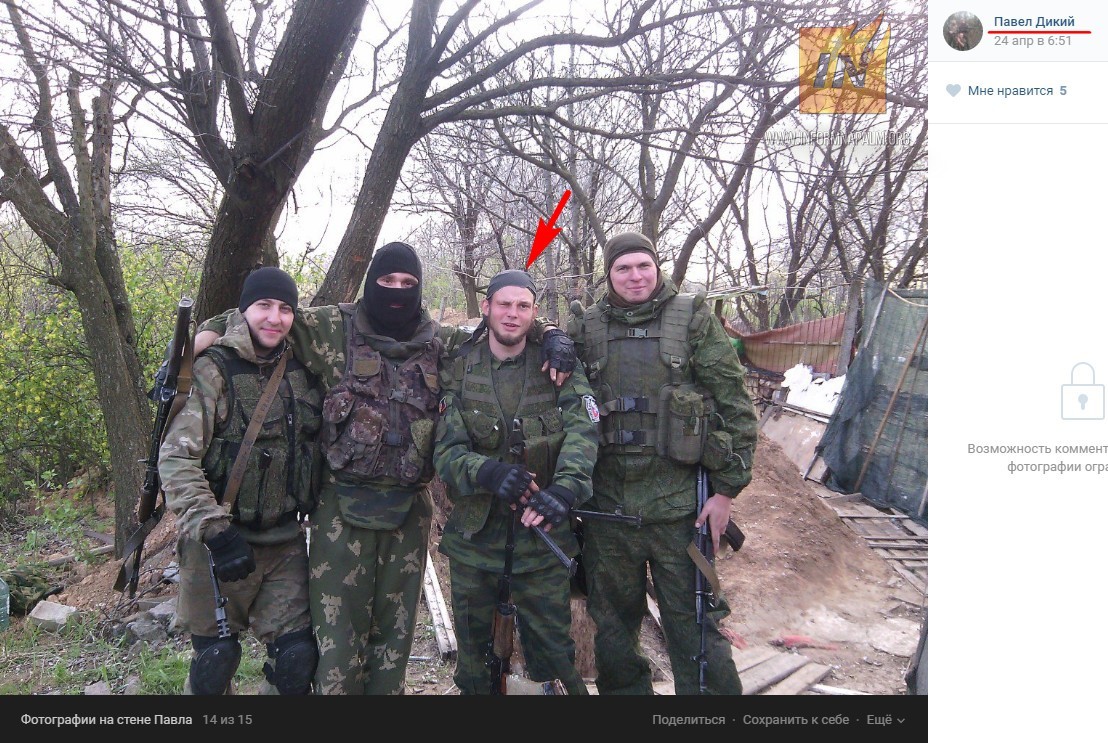 To identify a military unit in which Dykiy served, let’s analyze multiple photos, uploaded by him on September 27, 2013. The image shown below was also found in Alexander Tarasov’s (Dykiy’s fellow conscript) profile. Alexander Tarasov uploaded the photo of the two of them a year earlier, on September 30, 2012. This picture was taken in a designated smoking area, at the military unit 45767, in the town of Kamensk-Shakhtinsky. 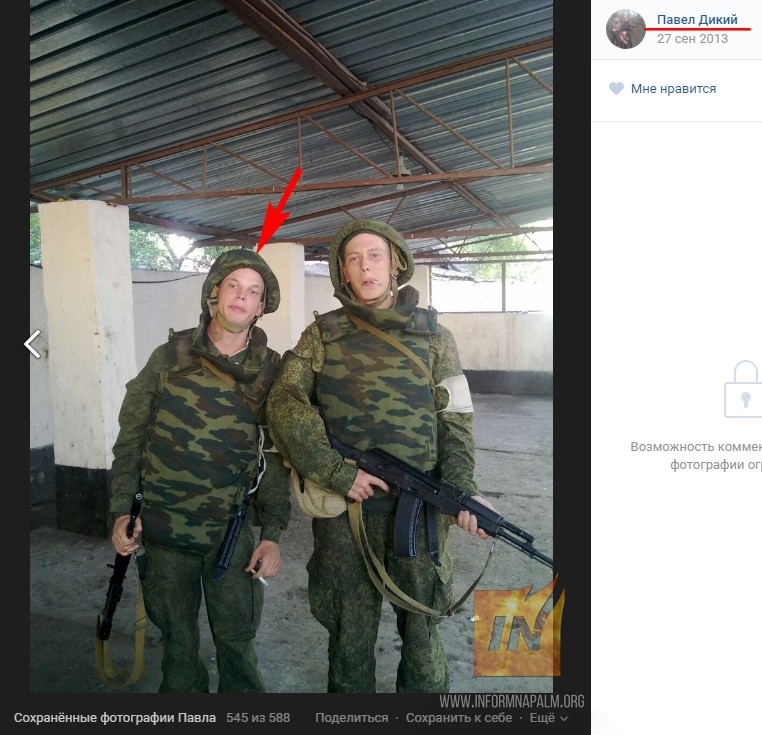 Alexander Tarasov’s photo from his conscript service time also shows that he served with engineer troops. 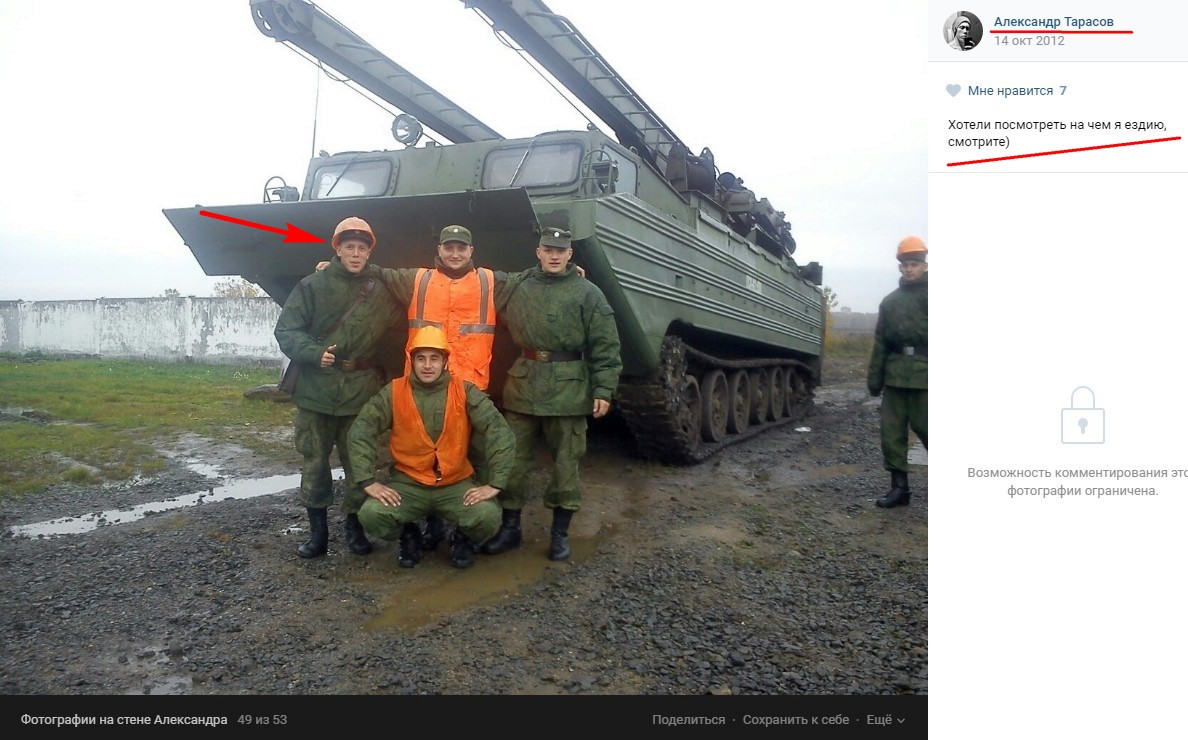 Here is Pavel Dykiy in pictures with Ivan Tsyganov. The pictures were taken in January 2016 at the military unit 45767 barracks. 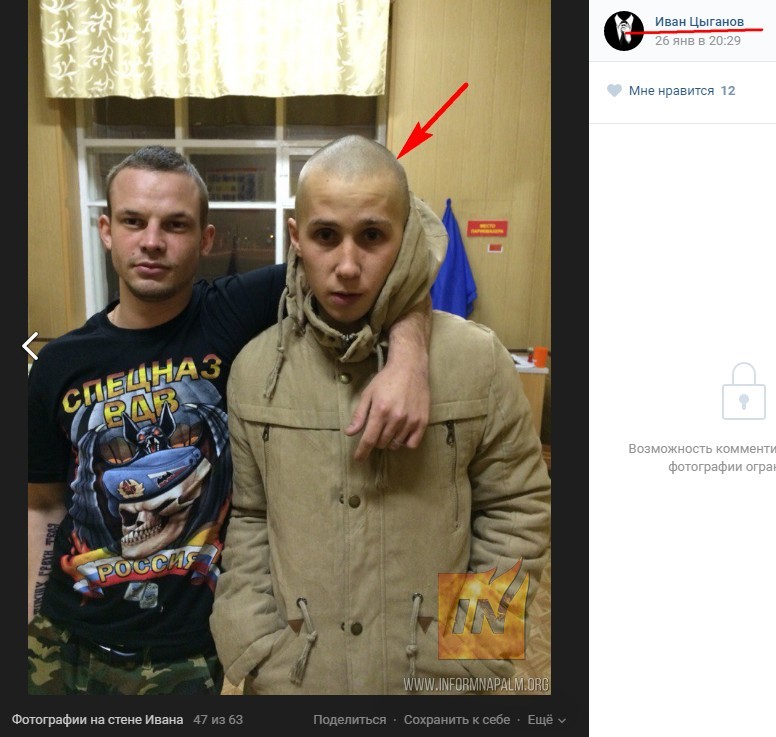 In this photo from January 2016 you can see a barracks corridor decorated with Christmas tinsels. 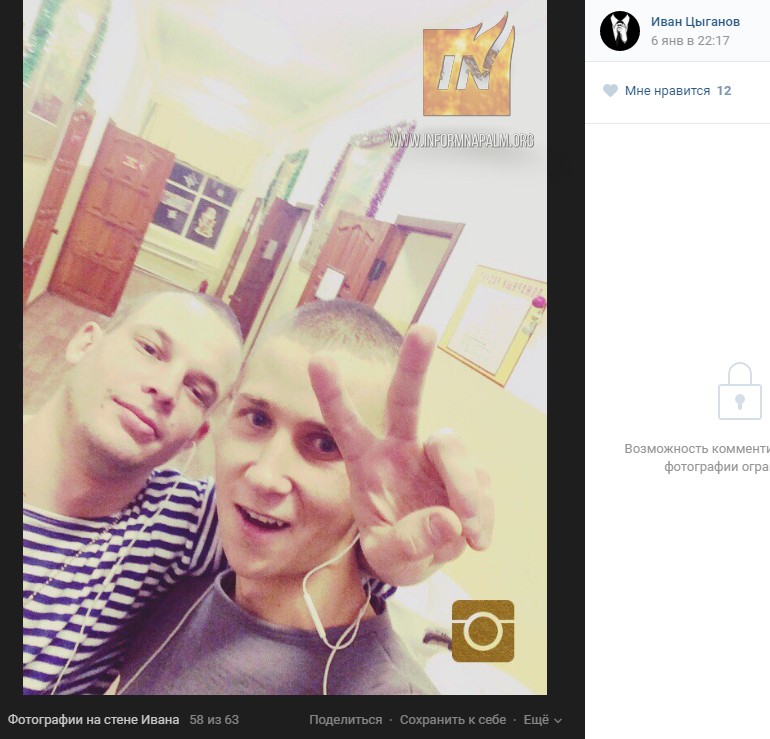 Note: Ivan Tsyganov and Alexander Tarasov appeared in this investigation only as a link between the war criminals Pavel Dykiy and Alexey Teplykh and the military unit 45767.

There are more photos taken in the barracks:

A screenshot of the phone app “100 days to discharge”, uploaded by Ivan Tsyganov on March 9, 2016, tells us that he was posting his photos in social networks on the same day he was taking them. 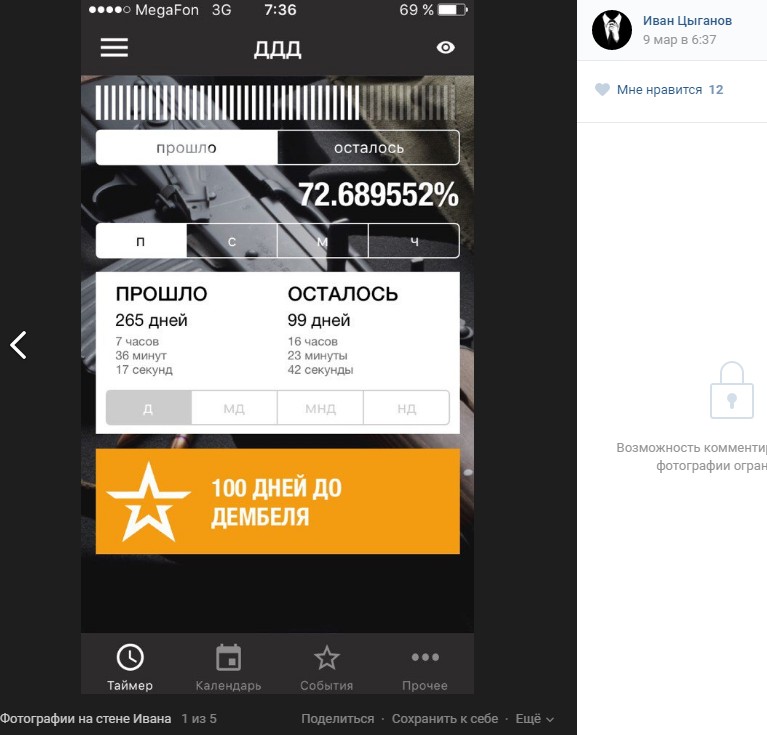 But let’s return to the pictures signed “DPR, 04.24.2016” in the album of  Russian contract soldier Pavel Dykiy. 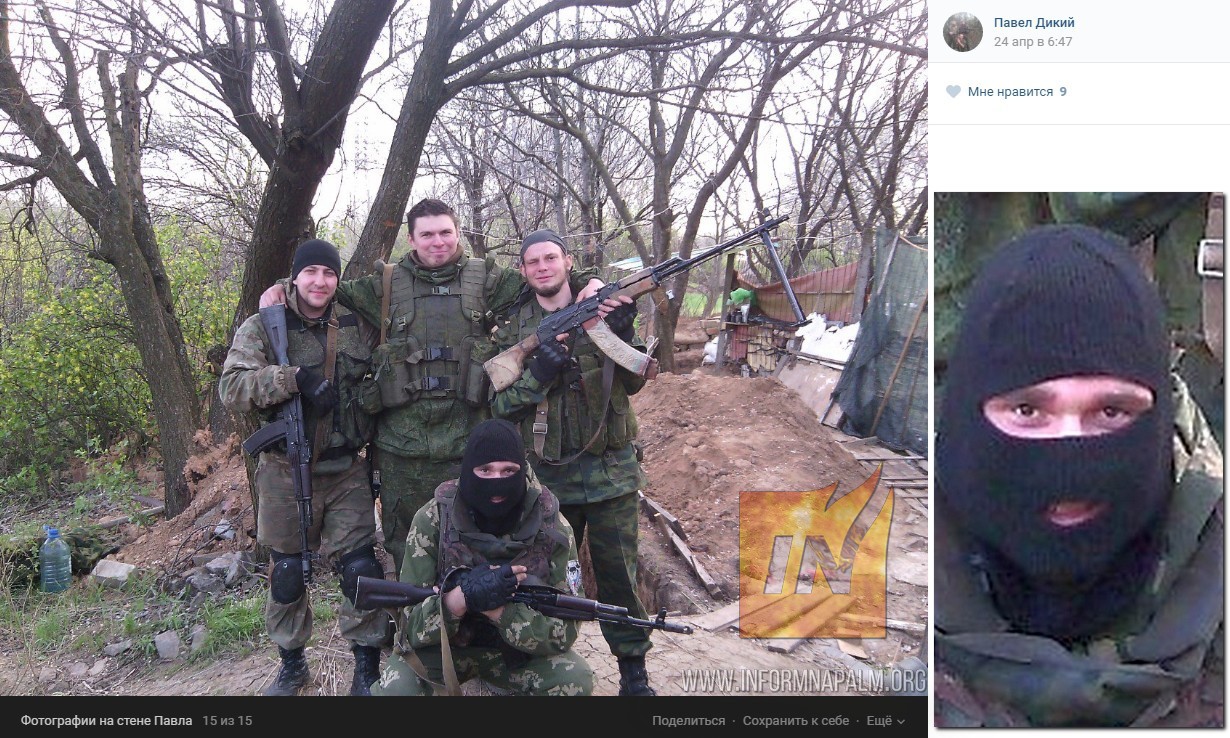 One of the militants in the photo wears a balaclava. After conducting a comparative analysis of brow arches, shape of the chin, nose and eyes, as well as the unique dentition (seen in his smile under the balaclava), we identified the conscript Alexey Teplykh.

Let’s see who liked this photo. 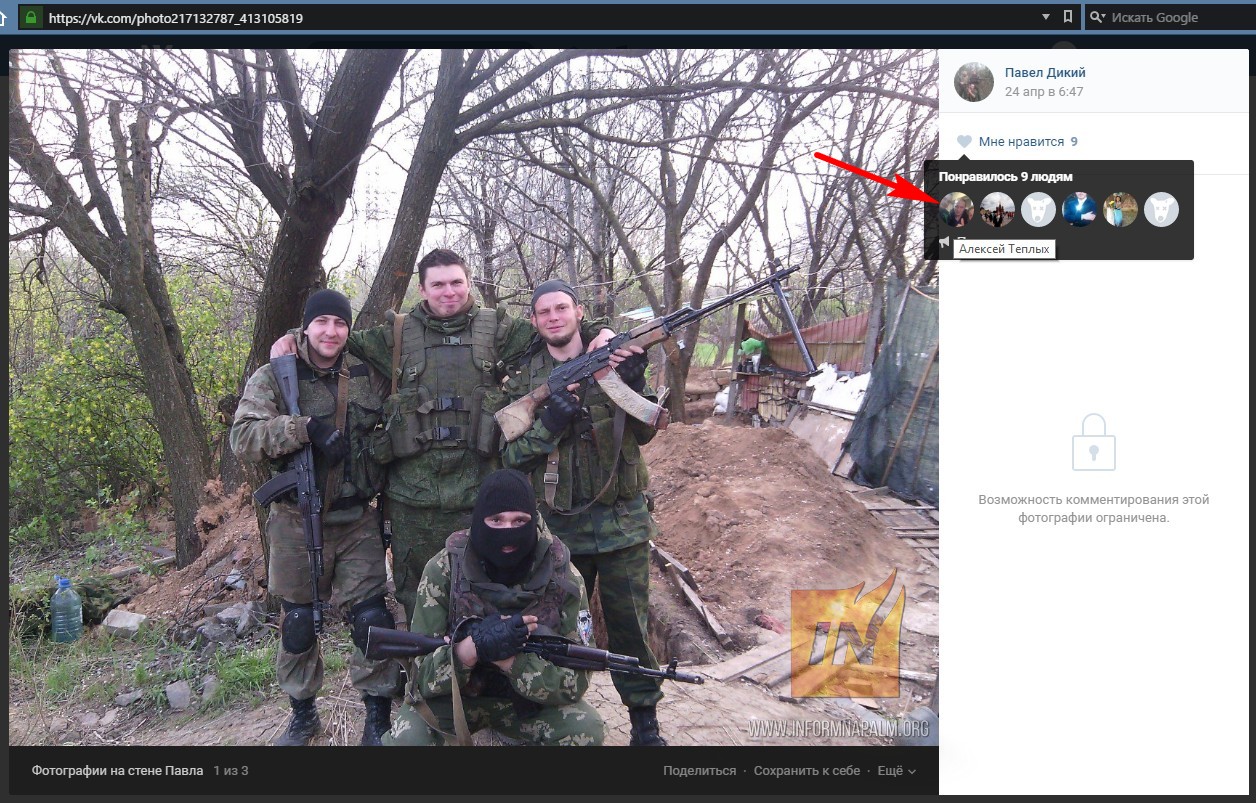 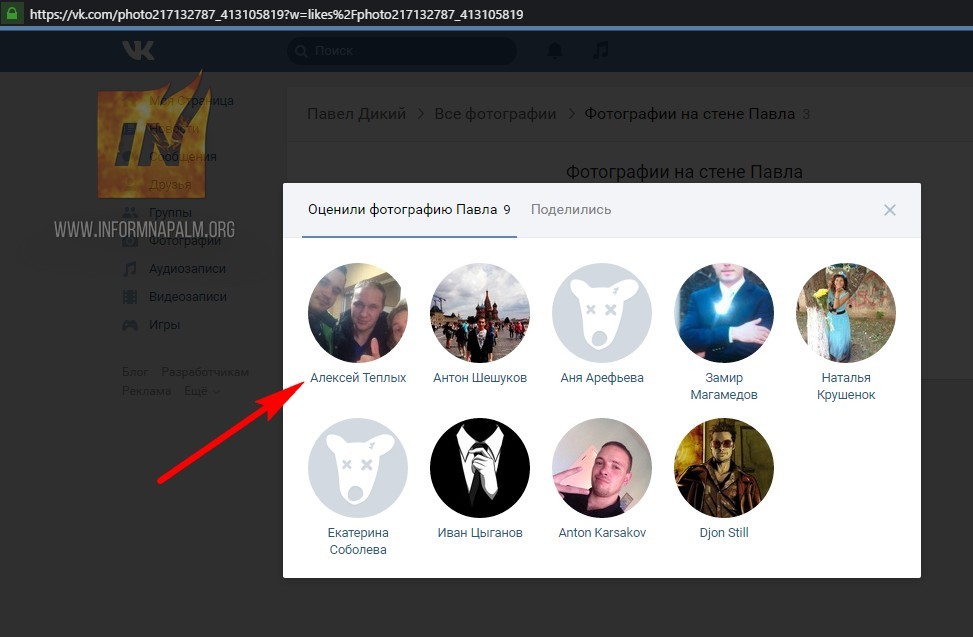 Nine people liked it, including Alexey Teplykh. It also confirms that the identification has been done correctly.

By moving a slider on the next photo from left to right, you can compare yourself the person’s face on the left, with the face of a militant wearing a mask from the group picture, mentioned a moment ago. 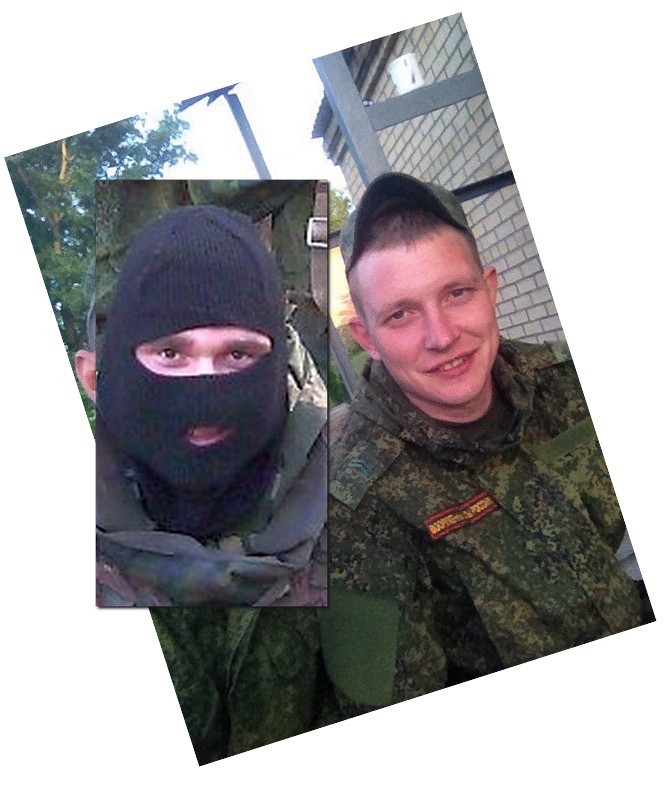 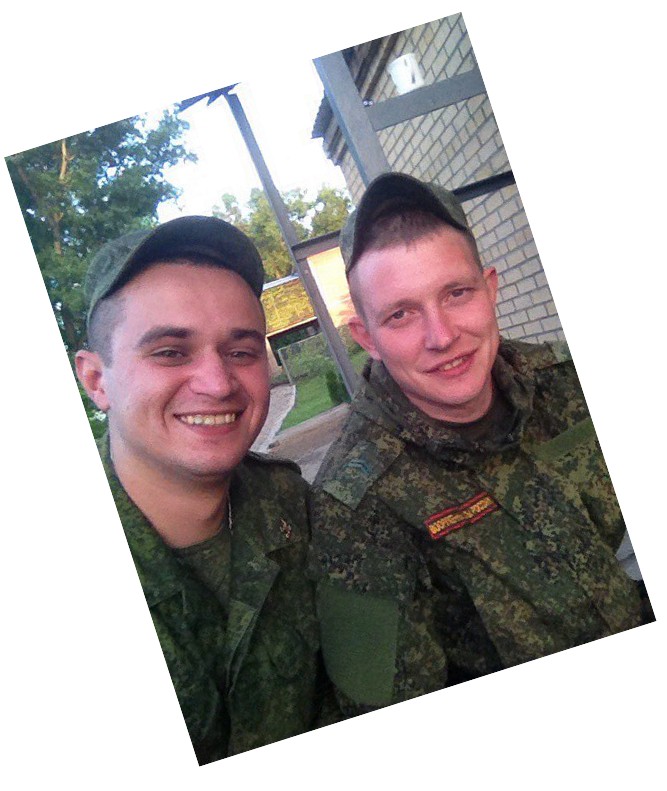 There are a few more photos to compare his face.

Alexey Teplykh, born 03.13.1995, is a conscript, who served in the military unit 45767, in Kamensk-Shakhtinsky. The term of his service ended on July 2, 2016 – on that day Teplykh posted a screenshot of the phone app that counts down days to a military discharge. 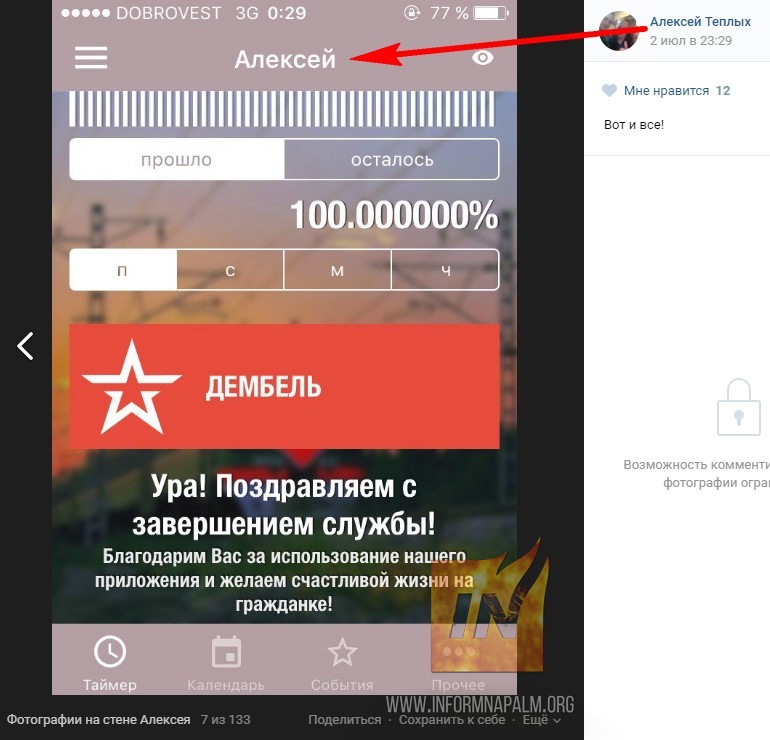 The photo of both Alexey Teplykh and Ivan Tsyganov, who was mentioned above, bridged the gap in the identification. 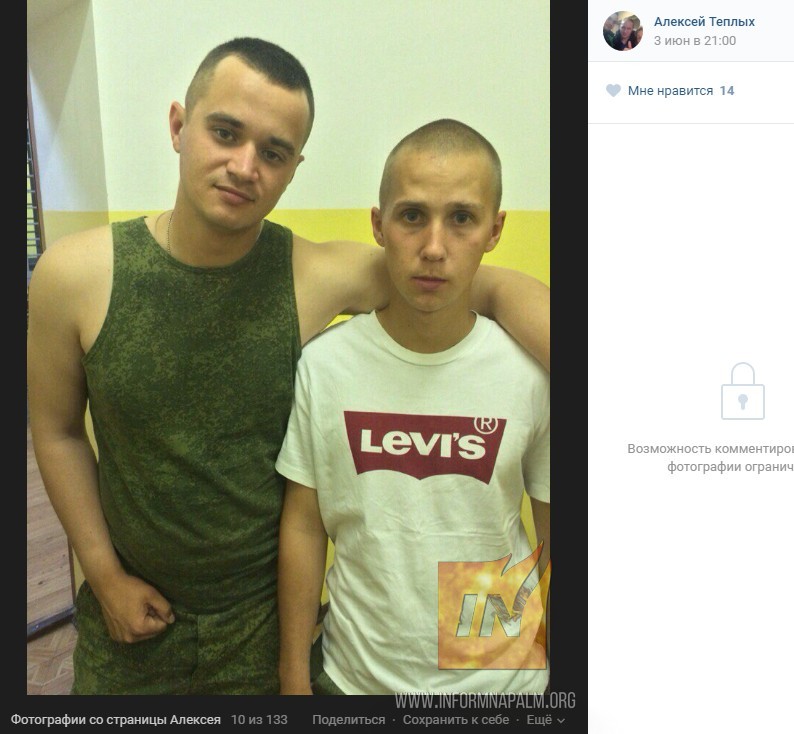 Since 2008, the term of conscript service in Russia has been one year. This term is built into the phone application “Discharge-meter”, which is used by many conscripts. It means that Alexey Teplykh began his conscript service in July 2015. In April 2016, he was in occupied Ukrainian territory and was photographed with militants of the DPR or other Russian servicemen.

Thus, more proof of Russian conscripts conducting “military exercises” under the guidance of more experienced Russian contract soldiers (such as Pavel Dykiy) in the occupied Donbas has been found.

Note, that it takes about 5 hours by car to get from the Russian town of Kamensk-Shakhtinsky to Ukrainian Donetsk and only an hour and a half to Luhansk. It is easy to bring Russian conscripts to the frontline every day to gain combat experience. Also, it easy to quickly return them to their home bases in Russia crossing the Ukrainian-Russian border through points which are under full control of the Russian Army. Should any casualties occur – they can be written off as an accident during a training exercise.