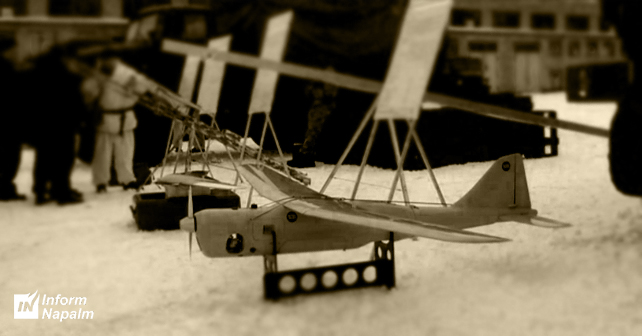 Since 2014, Russia has provided illegal armed groups (IAGs) of Donetsk / Luhansk People’s Republics (D/LPR) with modern weapons and high-tech reconnaissance equipment, as well as with qualified military operators for these systems.

In this investigation, InformNapalm volunteer intelligence community has found another confirmation of deliveries of Russian unmanned aerial vehicle (UAV) systems to the occupied part of Ukrainian Donbas, in particular: Orlan-10, Tachyon and Eleron-3SV.

Identification of UAV types on the photo

The starting point for the investigation was the photo, which was handed over to InformNapalm by the military commentator Dmytro Putyata. In the photo with the stands we could identify three types of Russian UAVs: Orlan-10, Tachyon and Eleron-3SV.

Geolocation of the photo

InformNapalm volunteers also conducted georeferencing of the image. The location was the well-known Transpele base of Laa-Trans Ltd., which is situated in Luhansk, Ukraine, currently occupied by Russian hybrid forces. Russian military equipment build-up was repeatedly recorded on vast areas of these grounds.

Here we also present photos from this base to compare buildings visually. 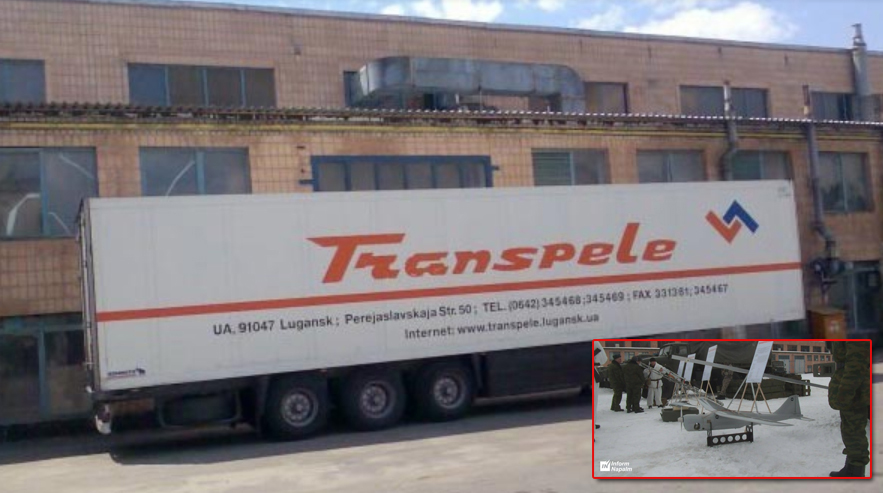 The identification of Orlan-10 drone

There are subtle figures “..73” visible on the Orlan-10 UAV in the place where its tail number must be. Based on the previous InformNapalm investigation, we can argue with certainty that the photo shows the Orlan-10 with the tail number 10273, which belongs to the 83rd Air Assault Brigade (AAB) of Russian Army (military unit 71289, permanently stationed in Ussuriysk). We got the full number from the aerial reconnaissance assets list of the so-called 2nd Army Corps (AC) of the LPR (in effect the 2nd Russian occupation corps in Donbas). 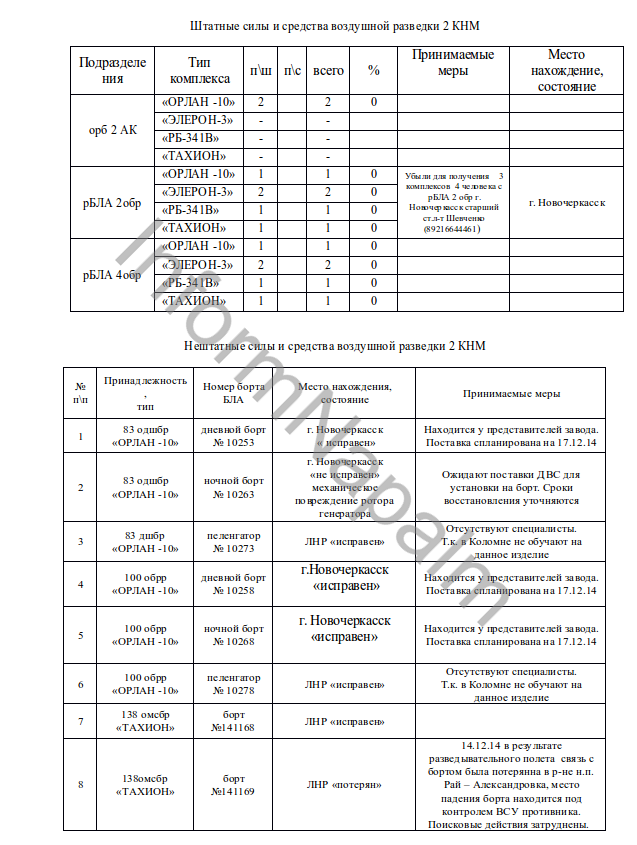 This UAV is a direction finder from the Russian EW system RB-341B Leer-3, it has already appeared in our investigations, made on the data from the hacked computer of the 2nd AC reconnaissance commander. We also found that the crew of this UAV consisted of a number of regular Russian servicemen from the 83rd AAB:

Read more about the methodology of identifying these Russian servicemen: Reconnaissance commander of the 2nd Army Corps in the focus of the UCA. Part 1. Orlan-10 drone.

UAV supplies to the DPR militants. 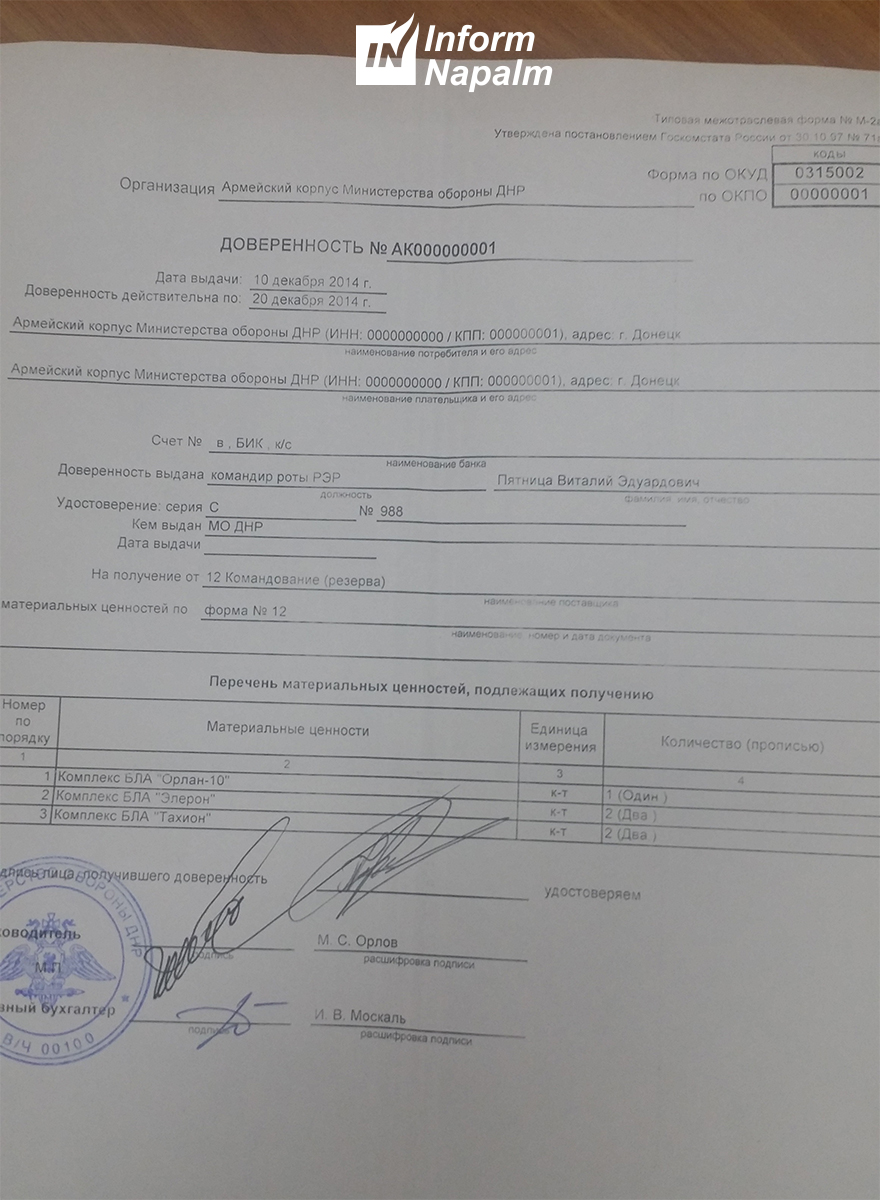 Read more about the source of this handover note in this investigation: Russian command sends army drone systems to Donbas – photo evidence

By analyzing the photo, we found another confirmation of modern Russian weapons and advanced military equipment being supplied and used in the occupied territories of Luhansk and Donetsk Oblasts of Ukraine.

As of October 2017, InformNapalm has already identified 44 types of Russian equipment that are not operated by Ukrainian army and/or could not have been captured in combat from the Ukrainian troops in Donbas. Of these, 7 types of equipment are Russian UAV systems.

Click on the infographics to enlarge. It is also available in Ukrainian.

This publication was prepared by Mikhail Kuznetsov especially for InformNapalm web site. Translated by Evgeniy Kalashnik, edited by Artem Velichko. An active link to the authors and our project is obligatory for any reprint or further public use of the material.
(Creative Commons — Attribution 4.0 International — CC BY 4.0)
Repost and share with friends.
For notifications about InformNapalm investigations follow us on Facebook / Twitter / Telegram.