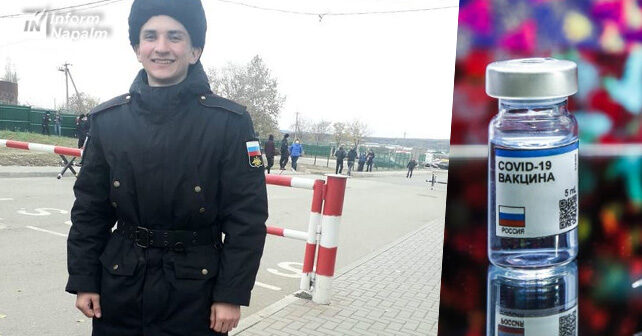 In occupied Crimea, a serviceman of the Russian Black Sea Fleet Maxim Churilov, who is doing military service in the 1096th Separate Anti-Aircraft Missile Regiment (military unit 83576) in the city of Sevastopol, was in intensive care after being vaccinated against COVID-19.

As reported by Radio Svoboda, on the morning of January 10, Russian servicemen of military unit 83576 in the occupied city of Sevastopol were gathered on the parade ground. The commander of the unit, Sergei Puzin, told his subordinates that they would be vaccinated against the coronavirus, participation in this event was mandatory and no refusals would be accepted.

After that, the conscripts were taken to a military clinic and vaccinated there. Some servicemen warned doctors about possible allergic reactions but the medical workers did not listen to their comments. In addition, they refused to name the drug they were vaccinated with. Probably, the Russian Sputnik V vaccine was used for the COVID-19 vaccination, since on December 5, 2020, vaccination against coronavirus with this particular vaccine began in Russia. Some Western experts criticized the Russian vaccine for the lack of evidence of its efficacy and safety.

About two dozen sailors vaccinated on January 10 in Sevastopol complained that they were not feeling well. They got a fever of 39 degrees of Celsius (102.2 ° F) and higher. One of the sailors, 18-year-old Maxim Churilov, who was called up for military service in October 2020, was in even worse condition. He developed an allergic reaction, swelling in his throat and began to choke. He was urgently taken to the emergency room of the nearest city hospital.

A video was posted on the Internet in which Irina Churilova, a grandmother of the conscript who ended up in intensive care, told the details of this forced vaccination.

Let us recall that in October 2020, Russia conducted yet another illegal military draft in occupied Crimea. This is already the twelfth illegal draft to deploy Crimean conscripts. These actions grossly violate the norms of international law. According to the Geneva Convention relative to the Protection of Civilian Persons in Time of War, the occupying power is prohibited from forcing people to serve in its armed or auxiliary forces, as well as pressure and propaganda in favor of voluntary enrollment in the army. The Russian Federation also violates international law when it opens criminal cases against those who refuse to join its army.

We believe that all illegal actions of Russian authorities in the occupied territories will have legal consequences. On January 14, 2021, the European Court of Human Rights (ECHR) issued the first positive decision for Ukraine in the case of Ukraine v. Russia (re Crimea) No. 20958/14.