The news related to the Mobile USW Radio Station Р-166-0,5 forced me to remember the November events in Donetsk. One week before P-166 convoy turned up in Eastern Ukraine, another convoy of “unidentified” vehicles had been identified in Donetsk. 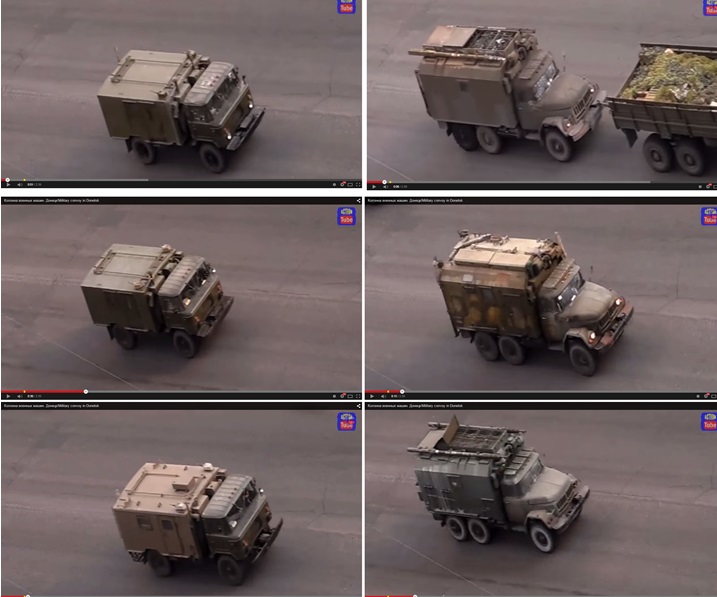 I did not manage to identify this old equipment, obviously those were either “Sobol”, or P-142 radios. However old, one could tell that they were in quite operating condition. We will figure out later: who they were intended for, definitely not for the DNR/LNR militants. The same convoy included 22 KamAZes [heavy-duty trucks], with two of them armed with ZU-23 mount.

However, they were not what attracted my attention.

The truck on the right is the first vehicle of the Russian army in Ukraine, carrying the warning sign “inflammable cargo”. Obviously noone asked the Ukrainian authorities permission to transport hazardous cargos through densely populated areas during the daytime. This is obvious violation of the Ukrainian laws.

The truck on the left bears another tactical sign on its door showing incomplete circle. A section of the tent in rear right of the truck bed looks sagging. Due to these distinctive features I was able to identify this car when it was in the other convoy.

The resemblance between the KamAZ described above and this car is undeniable. This time it was transporting D-30 howitzers. 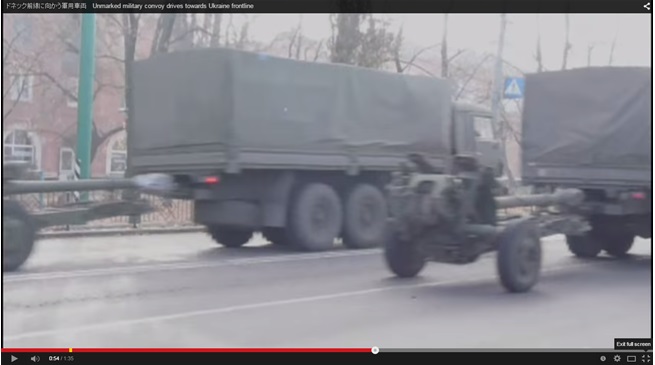 Therefore, it is the second time when the relationship between relocation of the army radio-technical facilities and artillery systems has been confirmed. After the first trip to Donetsk, it took a week for our KamAZ to come back to Russia, collect another cargo and return to Donetsk. It remains to find out where exactly this truck was crossing the Russian—Ukrainian border at least twice during the first 10 days of November without being noticed by OSCE observers? Just in case let me remind that along with this truck another 33 trucks from the first convoy and approximately 11 vehicles and nine 122 mm guns from the second convoy remained unnoticed.

P.S. When the article about P-166 (Rusian Army) was ready to go, we managed to discover original photo coverage of the military equipment and personnel with better quality video. This coverage was performed by Associated Press agency cameramen on November 8, 2014. So why OSCE still does not tell us whose army is there?

The information was prepared by specialist in video-monitoring Al Gri exclusively for INFORMNAPALM.ORG. When copying, please indicate the name of the author and active URL to this post.

No Responses to “Russian Military Convoys on Ukrainian Territory”