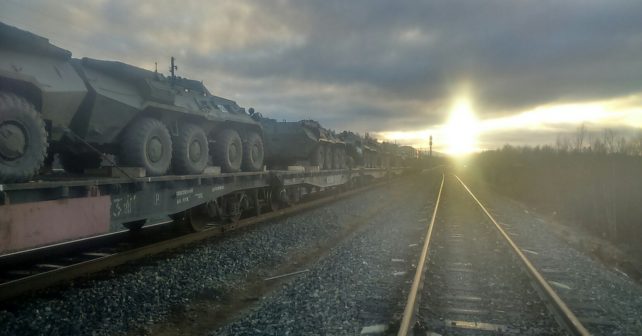 Military field exercises are the highest form of combat training and coordination of military forces and corps. In past years, the intensity of military maneuvers has increased in Ukraine as well as in NATO countries. This is a result of  aggressive behavior by Russia that broke international treaties and assurances of territorial integrity and sovereignty of neighboring countries. However, while military exercises by Ukraine and NATO are rather defensive and aim to coordinate the defense of their own borders, Russia demonstrates quite a different approach directing its combat operations far away from its own territory.

Old-time Russian general Alexander Suvorov pointed out: “It is tough for a soldier during military exercises, but the learned skills will let him feel easy and confident in a combat”. While NATO maneuvers are part of annual drills to coordinate the efforts of countries-members, the Russian army field exercises often reveal the aggressive plans of Russian military and political leadership.

Demonstrating the “power” of Russian military exercises, mass media not only lift the patriotic spirit of Russians but also expose the Kremlin’s cards. All these “tank biathlons”, ran first on firing ranges, then in other countries, under the pretenses of “protecting Russian speaking people” or “fighting world terrorism”, show that the Russian military exercises should be taken seriously, recognizing future plans of Putin’s government from a bluff.

Let us examine several episodes on the way from a military drill to participation in combat.

The international community InformNapalm mentioned in its previous investigations the participation of marines in the ground combat mission in Syria. Those were the marines of the 810th Separate Marine Brigade of the Black Sea Fleet (Sevastopol, temporarily occupied territory of Ukraine) and the 61st Marine Brigade (military unit 38643, village Sputnik, Pechenga raion, Murmansk oblast), The recent death of private Andrey Timoshenkov from the 336th Marine Brigade (military unit 06117, Baltiysk, Kaliningrad oblast) also indicated the participation of this detachment in the Syrian mission. Marines rotate every three months of their deployment. We have learned that from their past “tour-de-force” as a part of the Russian invasion forces.

Let us have a look back and examine the military exercises of marines and their connection to future combat missions.

On September 21, 2015, the Russian state news agency RIA Novosti informed that  detachments of marines of the Northern Fleet started live fire training during military drills on the Combat Training Center base of the Western Military District, located in the village of Mulino in Nizhny Novgorod oblast. It was accentuated that marine commanders  practiced methods of interaction with the squadrons of fighters and the Army aviation to achieve stated combat training objectives.

At that time the Syrian mission had just started; an air force group was deployed and the first air strikes were carried out, including on the civilian targets, but the ground forces in Russia had already started practicing their interactions with aviation. Pictures of the trooper Valentin Shamanin, who many times “supplied” us with the photographs of the Russian-Ukrainian-Syrian deployments of the “Northmen” (1, 2) show these military drills. 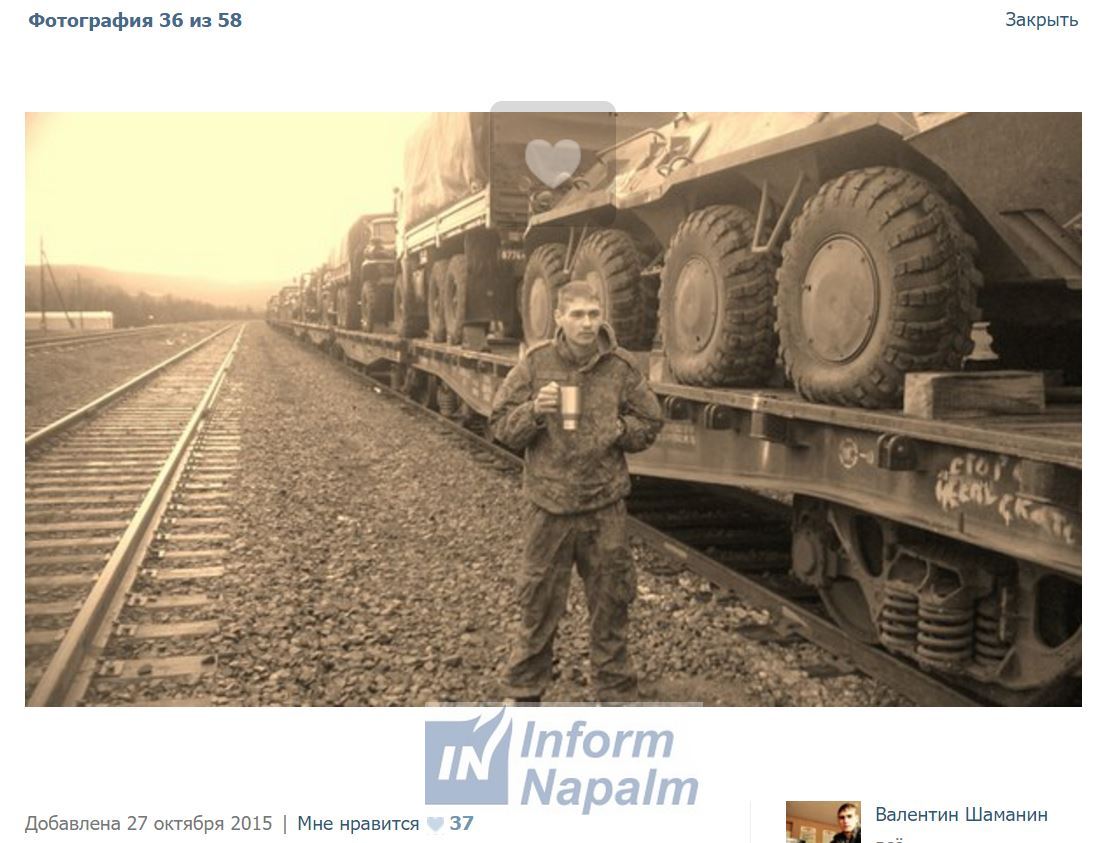 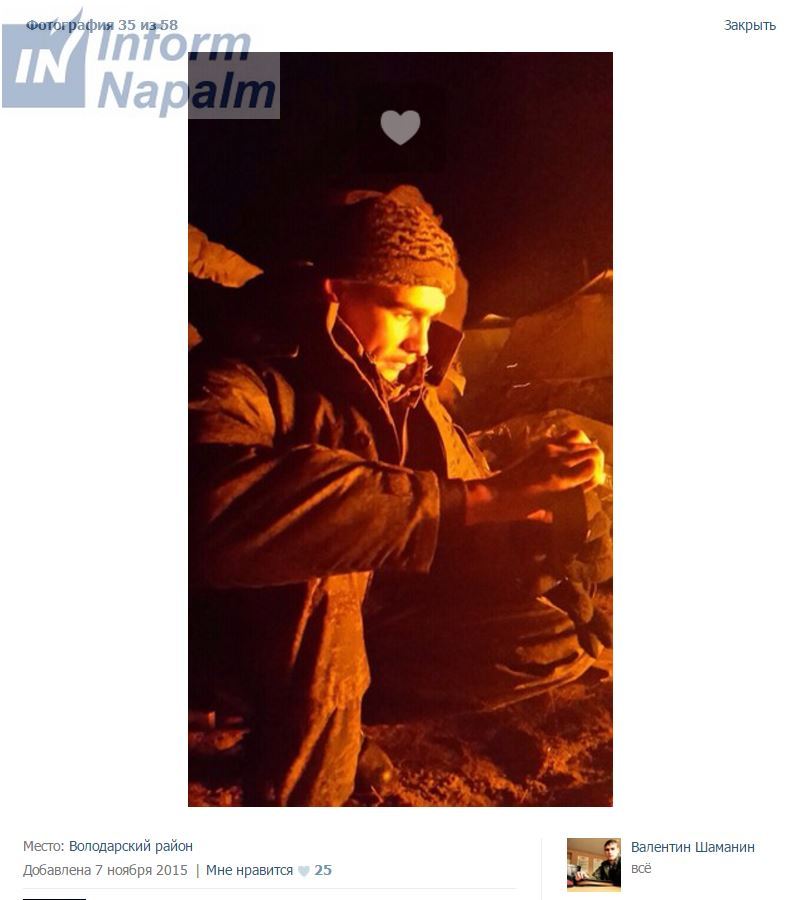 From the end of December, 2015, through the end of March, 2016, marines from Murmansk were deployed to Syria. One can see this in the pictures (1, 2, 3) of another serviceman of the 61st Marine Brigade Ivan Shcherbatenko, who was also spotted earlier in Donbas, Ukraine (in details). 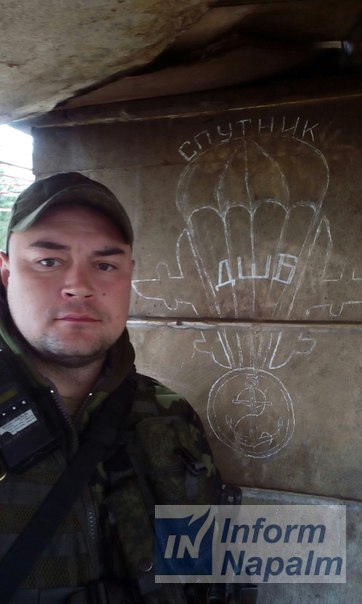 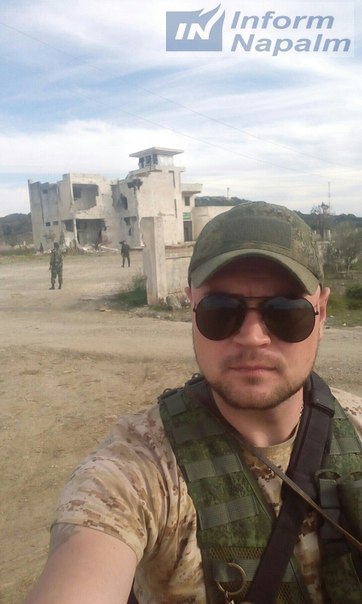 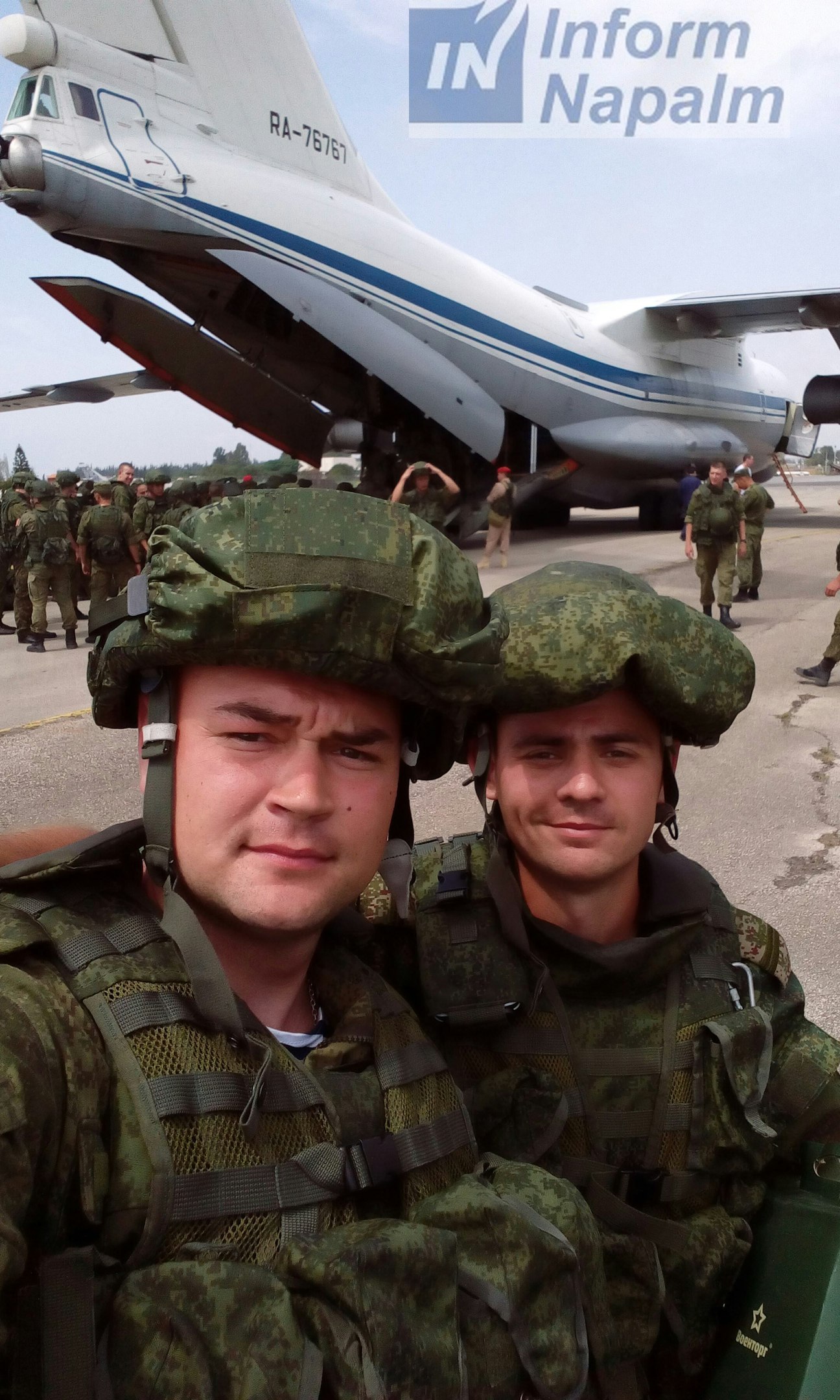 Some of the infantrymen were awarded the medal of the participant of the military campaign in Syria, despite the statements of the Russian Ministry of Defense that “Russian servicemen do not participate in the ground mission” in Syria. However, “Russian’ palm trees suggest the opposite (picture). 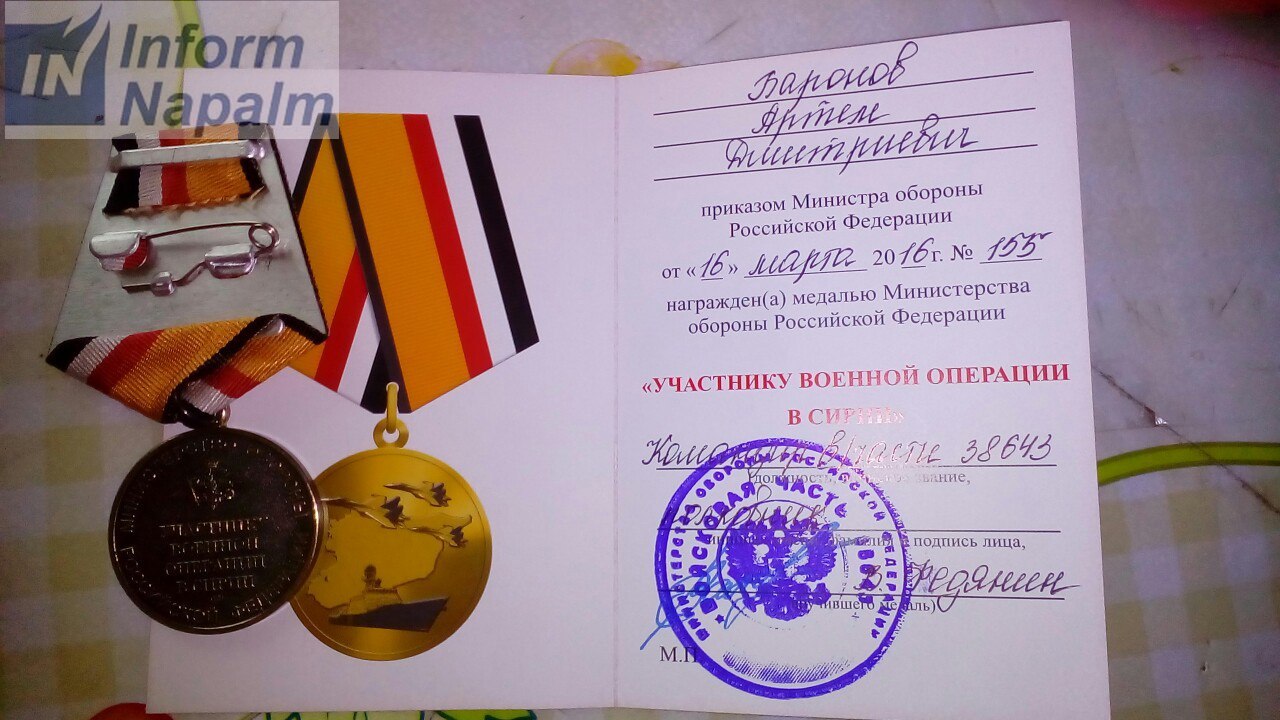 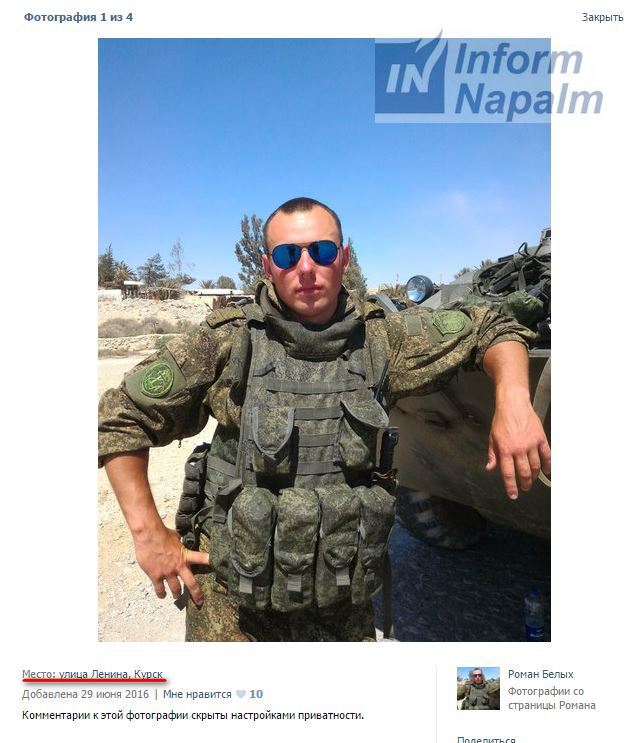 They say that the road to hell is paved with good intentions. What might be more humane than mine clearing of Palmira, the UNESCO world heritage site? But why Palmira only? What about other places? The answer is simple: demining was done for the safety of a new military base in Palmira, which was, so far temporarily, built by the Russian forces.

Just to remind you that on April 1, 2016, two mine clearing groups of the International anti-mine center of Russian military forces (military unit 33246, village Nakhabino, Moscow oblast) arrived in Syria for the so-called humanitarian mine clearing of Palmira, the liberation of  which was celebrated big with the Symphony Orchestra of the Mariinsky Theatre. But let us return to the connection between military exercises and combat operations.

In March of 2016 it was reported that a Russian military unit arrived at a military base in the city of Puna in India to participate in a joint exercise of peace keeping and humanitarian mine clearing. There are some pictures from the album of Russian serviceman Dmity Mikhailov here: 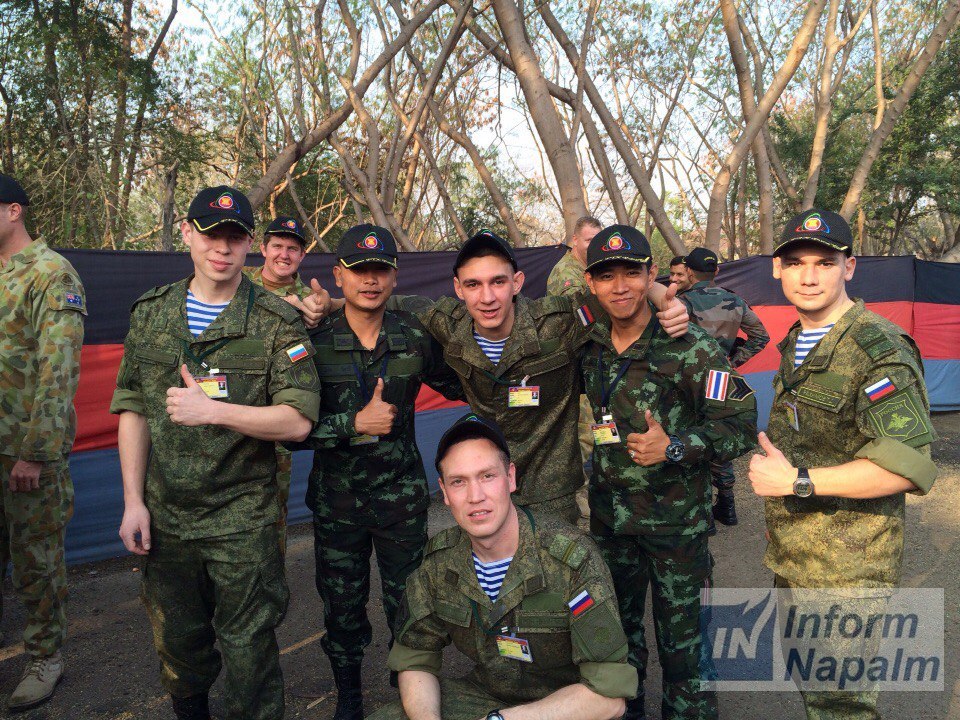 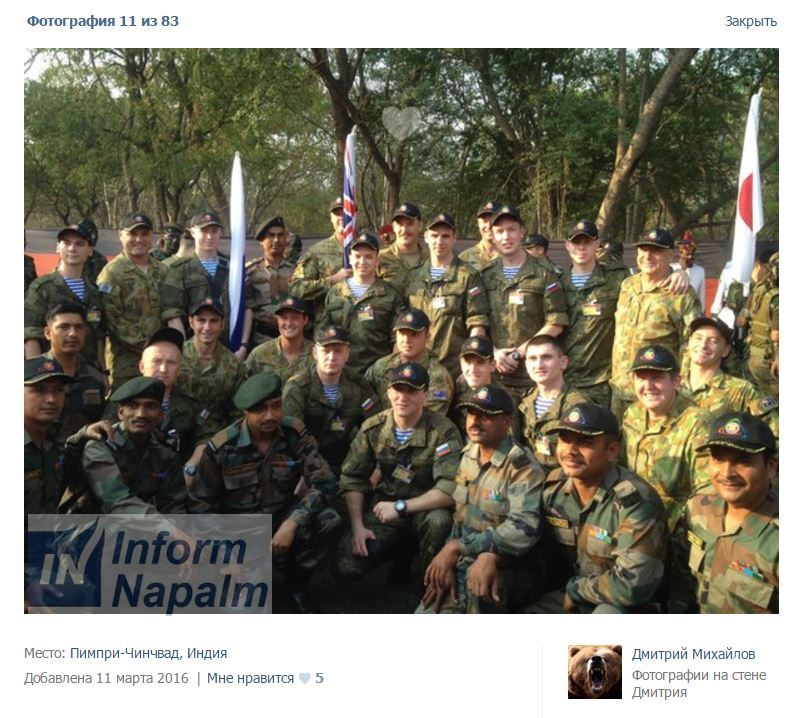 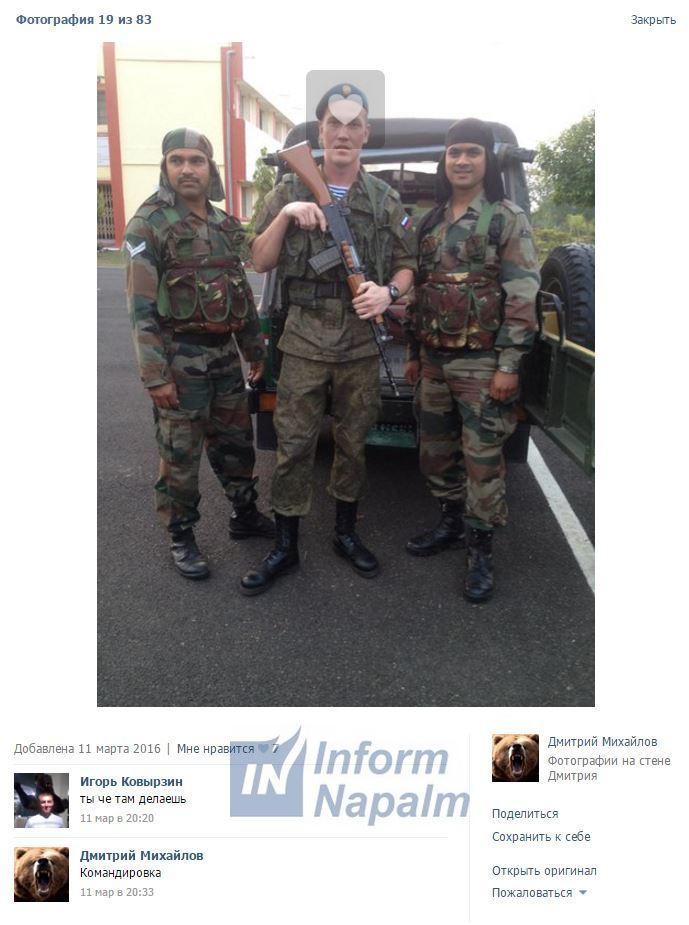 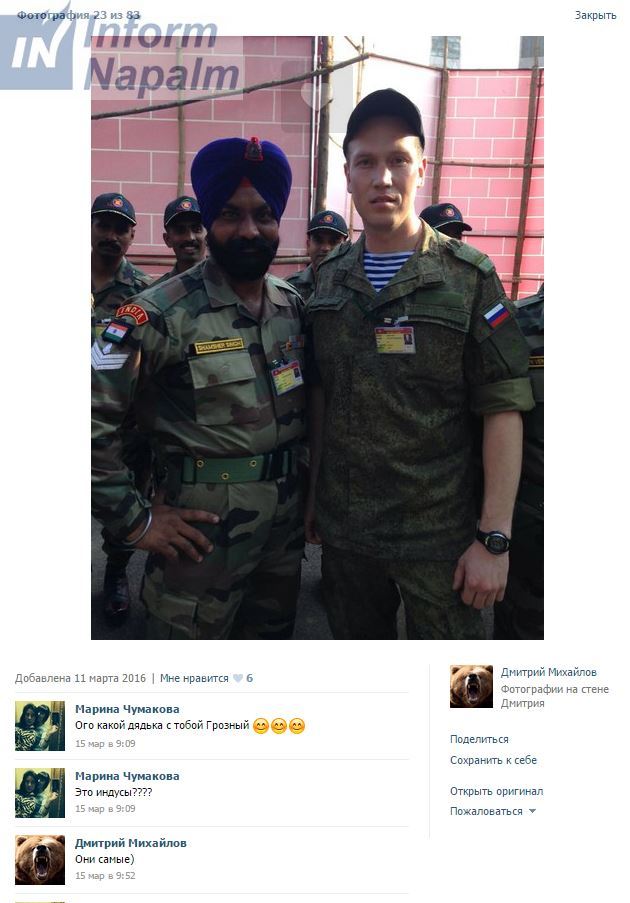 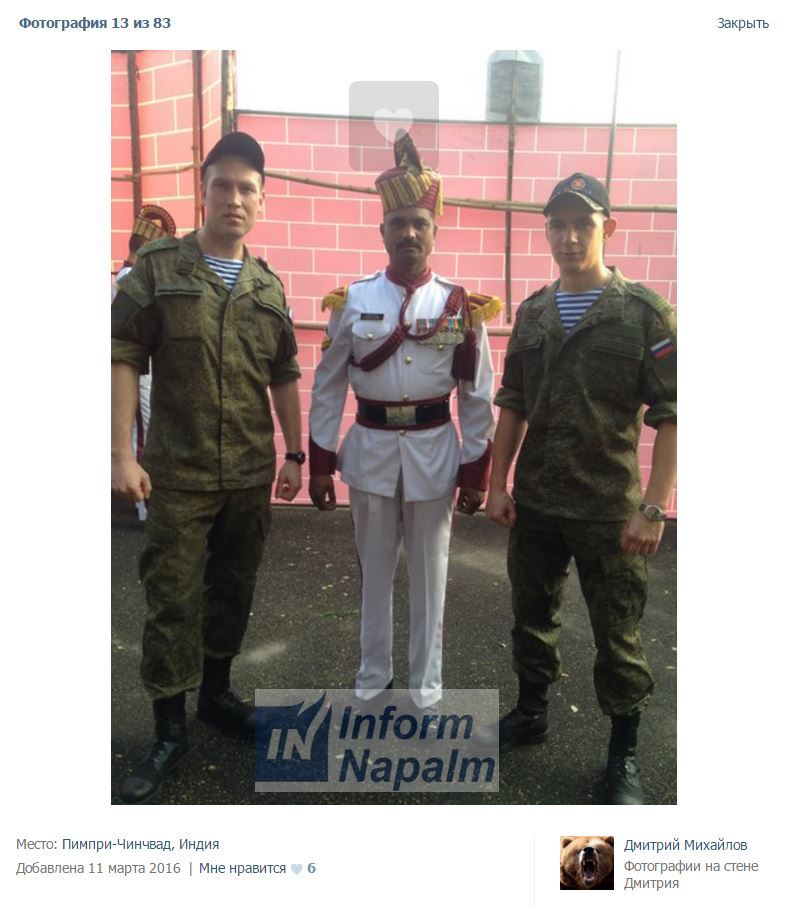 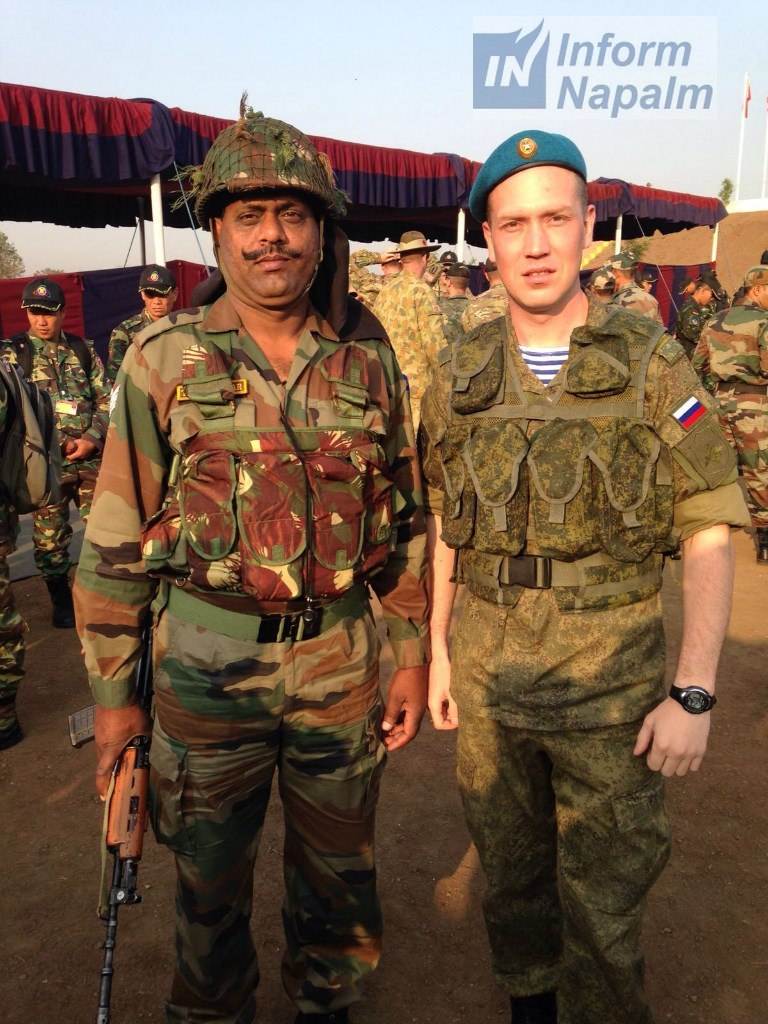 And in April of 2016 participants of the exercise were already in Syria. These pictures indeed reflect the work of military engineers under difficult climate conditions. 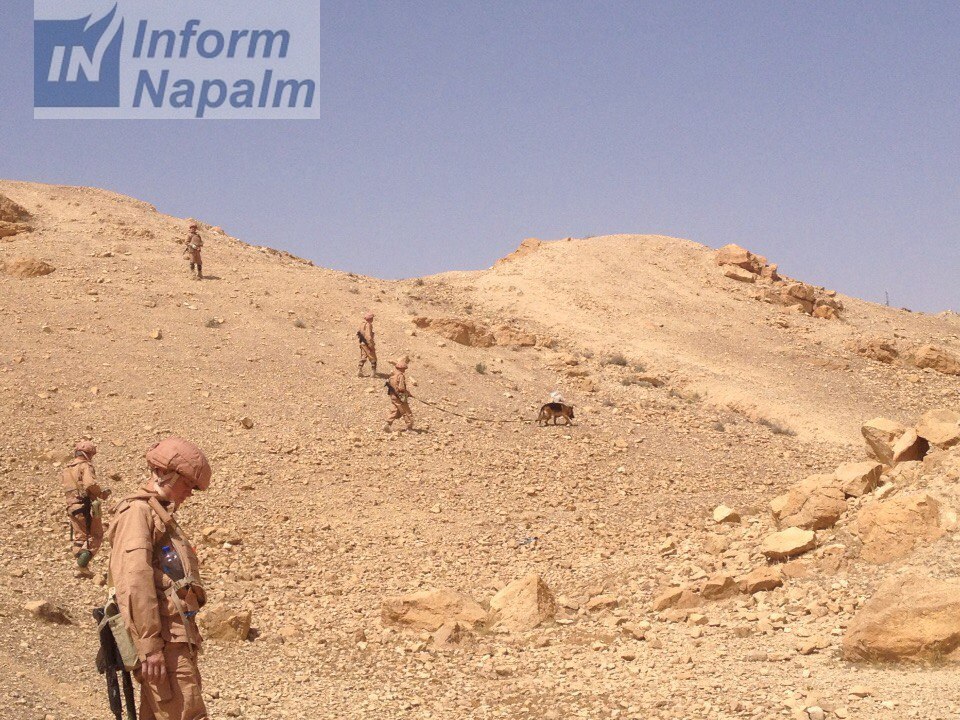 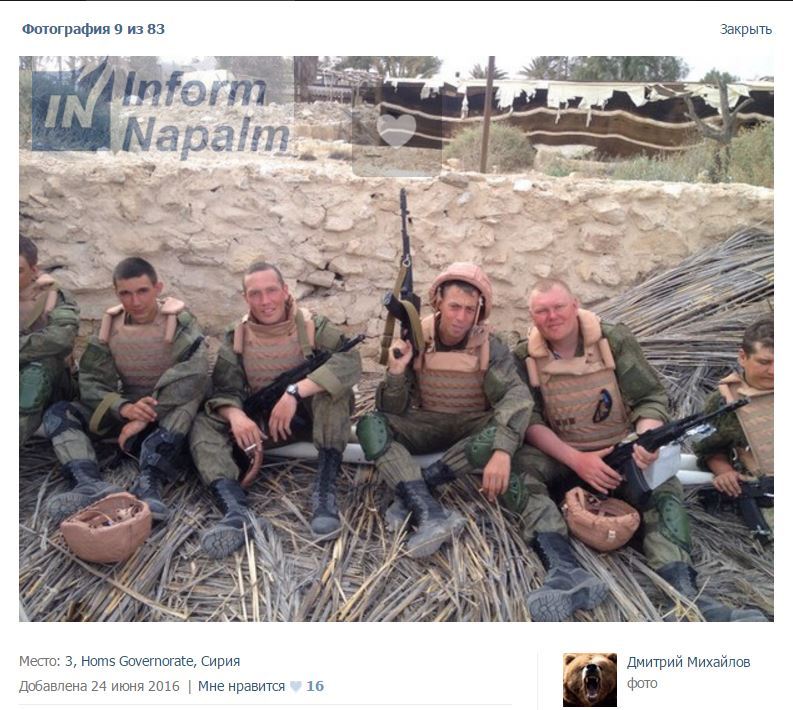 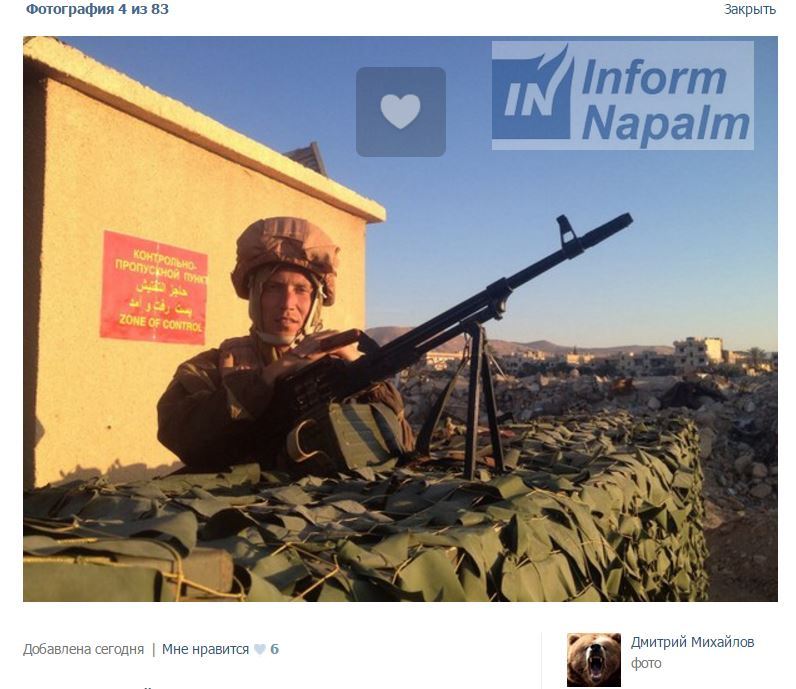 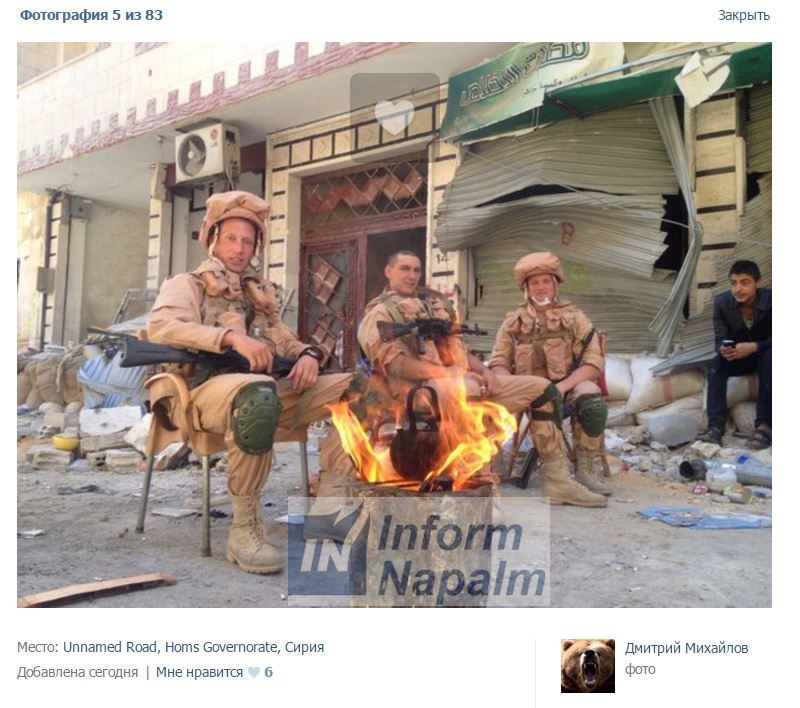 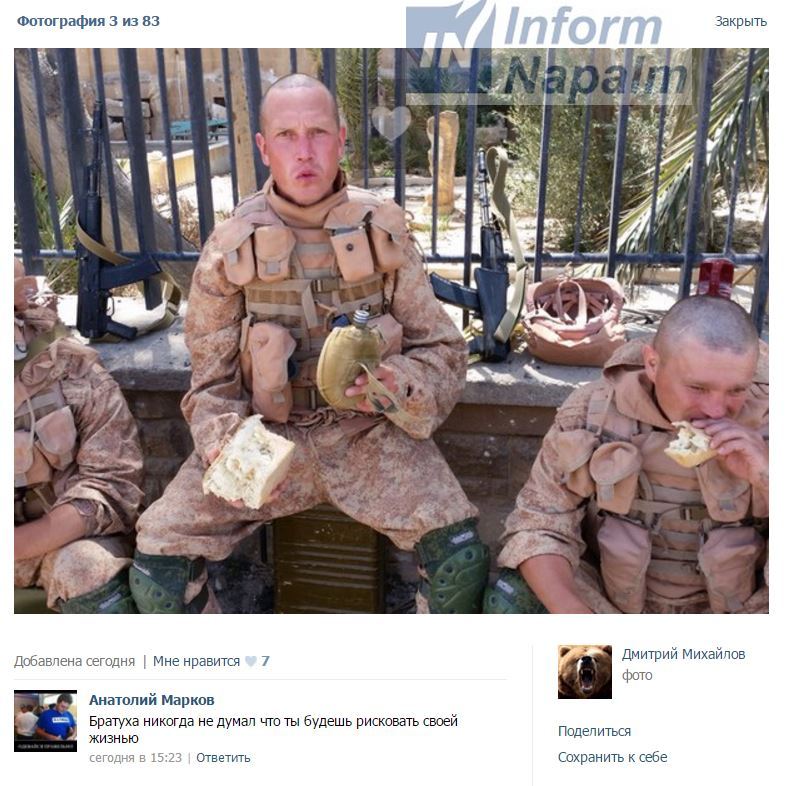 After the assignment, the engineers were warmly welcomed back at home and recieved awards.

One can assume that servicemen get a notification of the mission and future deployment to Syria directly during military exercises. The orders are not to be discussed and there are no ways around that, apparently. Therefore, family and relatives of Russian servicemen, be aware: any military exercises might end up in Syria.

Mediterranean crusade of the only Russian aircraft carrier

There are talks about a possible naval expedition of the aircraft carrier Admiral Kuznetsov to the Syrian shores. This is not the first time we hear of this: the rumors that the carrier’s air wing will take part in the Syrian campaign have been circulated since 2013. In winter of 2016, several members of the Russian parliament from the Communist party wrote a petition to use the aircraft carrier in the Middle East operation. The representatives of the Ministry of Defense denied the option at that time. But again, the opportunity to flex their muscle presents itself. Mass media reports that Kuzya (nickname of Admiral Kuznetsov) will be seen in the fight against world terrorism in the fall of 2016. The carrier that was built during the Cold War can be used during the next phase of the Cold War, as the modern geopolitical confrontation is called nowadays. Russian social media are proud of all the mighty grandeur, although not many are aware of the operational features and shortcomings of this carrier compared to the similar modern US Navy War ships. To put it lightly, it is very outdated. 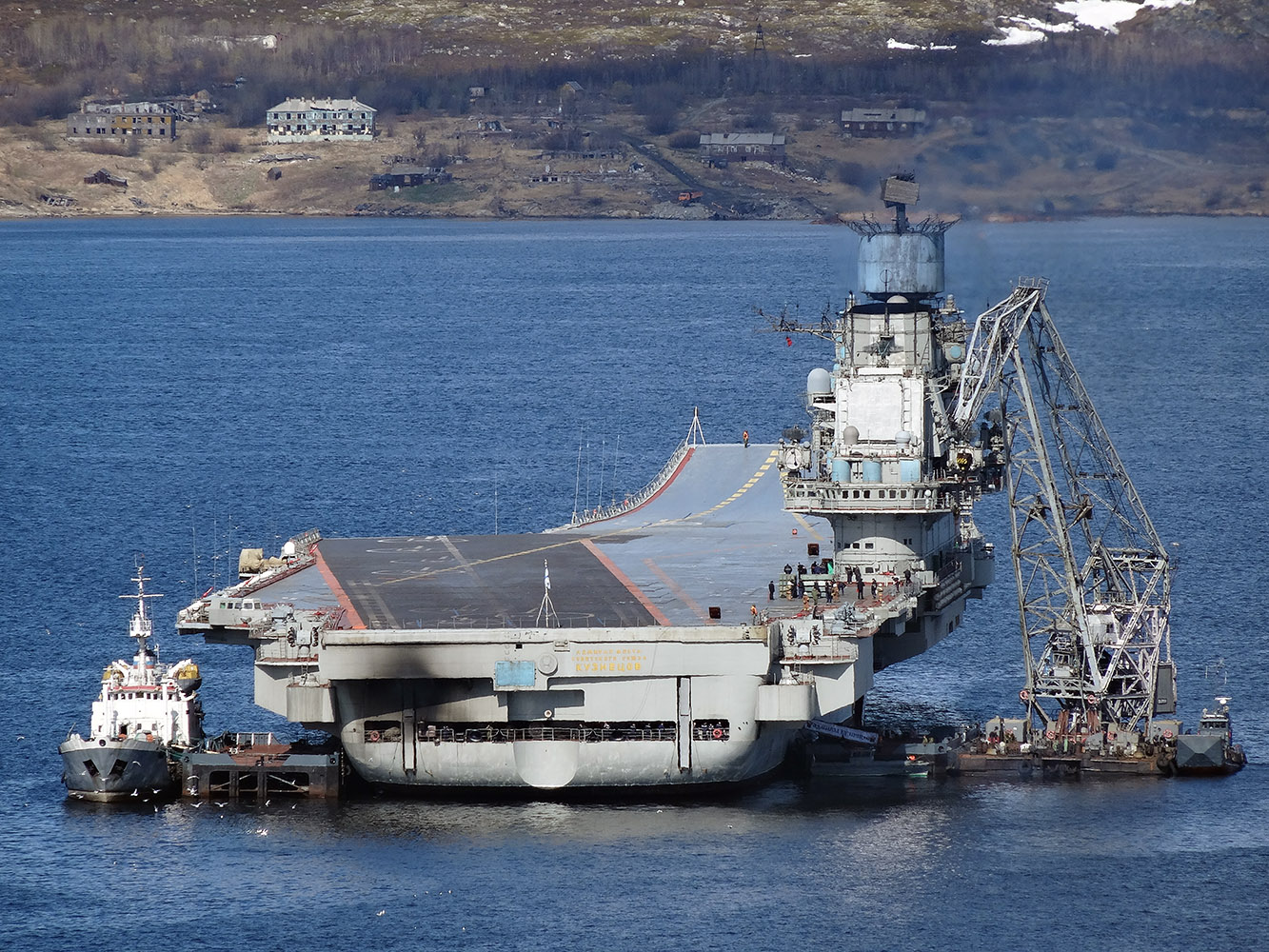 Despite the long repair and modernization time, which comes and goes, or which might be started after return, the carrier’s crew is preparing for the deployment. The pilots of this aircraft carrier were trained and drilled at the test complex Nitka in Crimea from April through June of 2016. Nitka is the only land test site that mirrors all the dimensions and shapes of Admiral Kuznetsov’s deck. In July actual training flights started in the Barents Sea from the deck of this carrier itself. It was reported that starting in October 2016, combat flights will be conducted from the carrier’s deck to strike land targets in Syria in close interaction with the air wing from Khmeimim airbase. Admiral Kuznetsov “will carry about 15 Su-33 and MiG-29K/KUB fighter jets and over ten Ka-52K, Ka-27 and Ka-31 helicopters “. 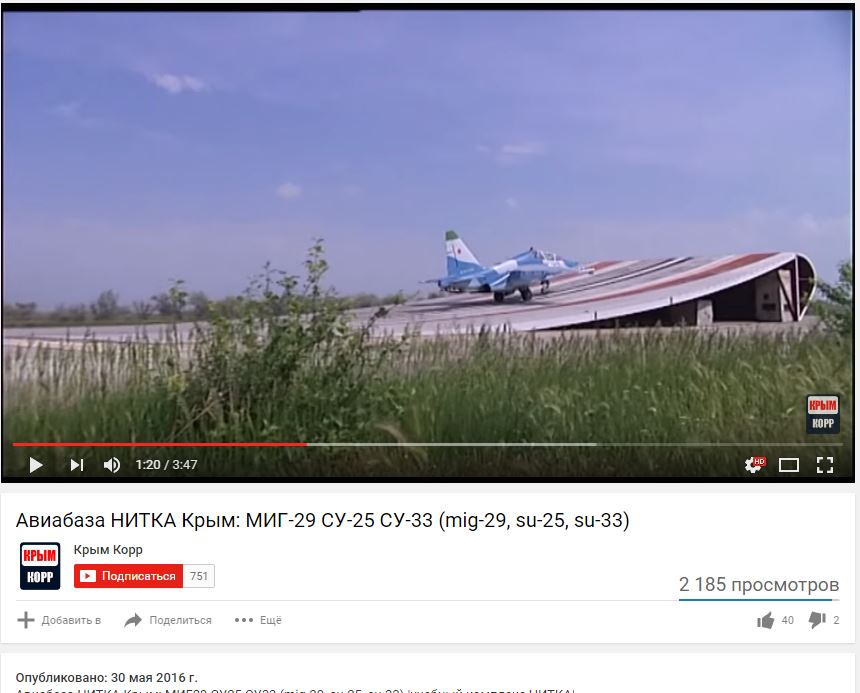 If the skills of the pilots after the exercises improve, the equipment might fail, because the carrier’s operations aren’t smooth. A naval aircraft carrier group usually consists of a large anti-submarine ship, escort vessels, a tug and three tankers because Kuznetsov is a diesel ship that consumes during a campaign as much fuel as the whole North Fleet. We will see if it can make it to the coast of Syria, for the Russian people need “panem et circenses!” so much. There have been Kalibr missile launches already but no combat air strikes and hitting targets from the deck of Kuznetsov yet.

As one can see, there is only one step from military drills to real combat missions. International support of Ukraine has not allowed the Kremlin to execute their plans completely and test all their weaponry and abilities on the battlefield. The situation in Syria is different. Syria is an ideal “firing range” for Russia, disguised by the fog of war while “fighting terrorism”. We wrote about just a few examples and hope that now you will view any news about Russian military exercises from a different perspective.

Observe and draw your own conclusions. The fight is not over yet.