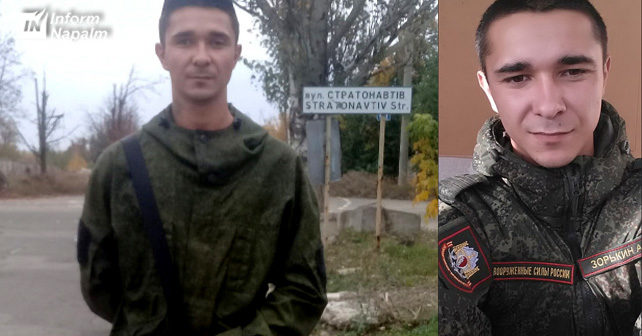 Russian Federation continues to deploy its professional military personnel in the occupied territories of the Ukrainian Donbas who carry out special missions disguising themselves as militants of the illegal armed formations of the Donetsk People’s Republic (DPR) or Luhansk People’s Republic (LPR). New facts relate to the participation in the war against Ukraine of a professional Russian serviceman Andrey Zorkin, who is serving in the 19th Motorized Rifle Brigade (MRB), the 58th Russian Army. Servicemen of the 19th MRB have repeatedly come to the attention of InformNapalm volunteers and are listed in our OSINT investigations database. Read more:

On July 25, Twitter user @GirkinGirkin posted a photo of a Russian citizen Andrey Zorkin, who was spotted in the occupied part of the Ukrainian Donbas in the fall 2019 and summer 2020. InformNapalm volunteers studied social media pages of this man in more detail and found that Zorkin had been serving under contract in the 19th MRB (military unit 20634) since 2015.

Here is a photo posted in the account of Andrey Zorkin on October 6, 2019 (archived account, archived photo album). Behind him, there is a characteristic street sign. The inscription reads “Stratonavtiv Str.” in Ukrainian and English. 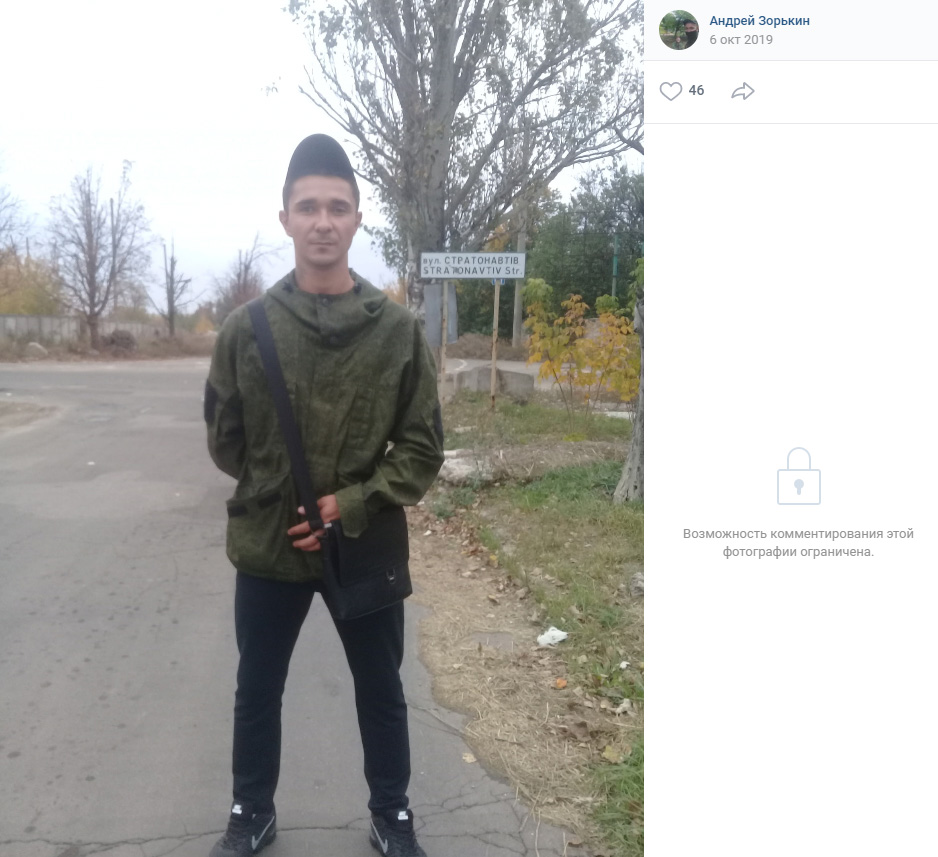 This starting point indicated that the the photo had been taken in Ukraine.
InformNapalm volunteers also carried out precise geolocation of this image in the vicinity of occupied Ukrainian Donetsk. 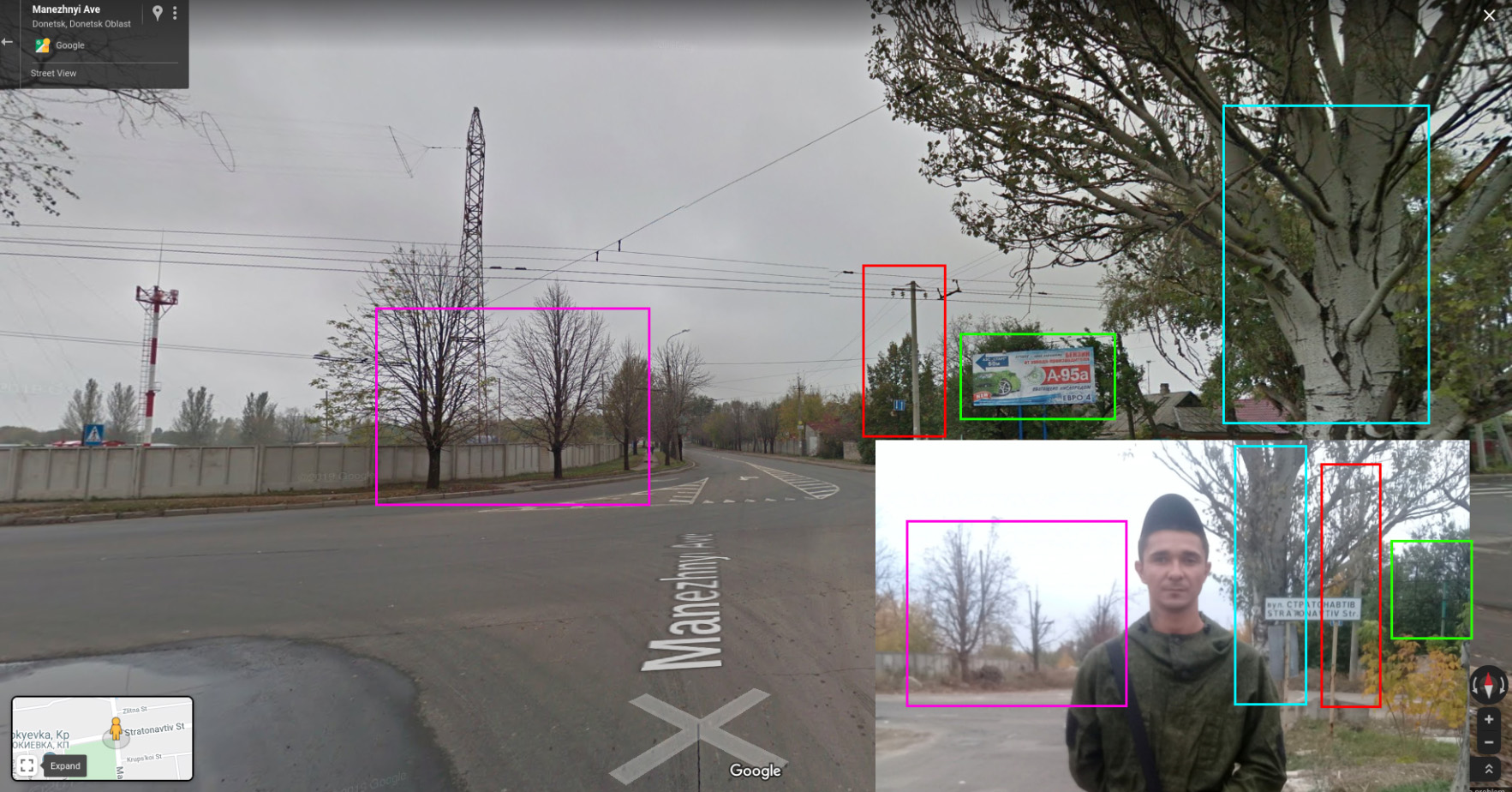 There was another photo in his account, dated July 11, 2020, testifying the presence of this Russian military man in the Donbas. There is a militant with the DPR shoulder patch behind Zorkin. 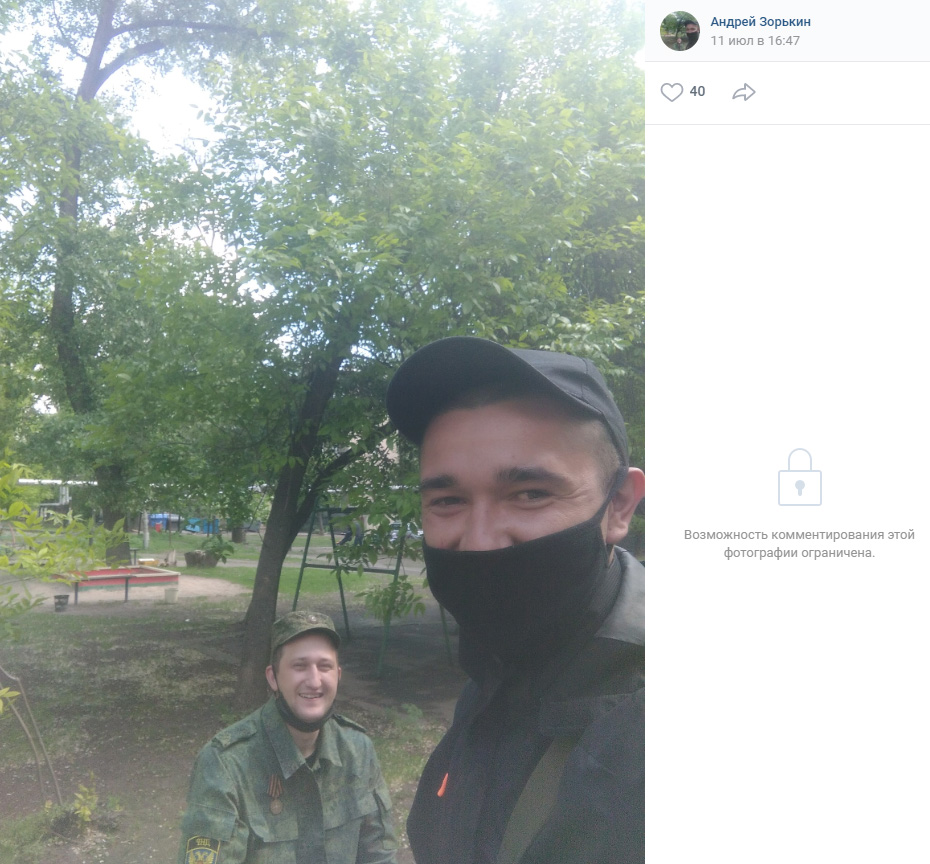 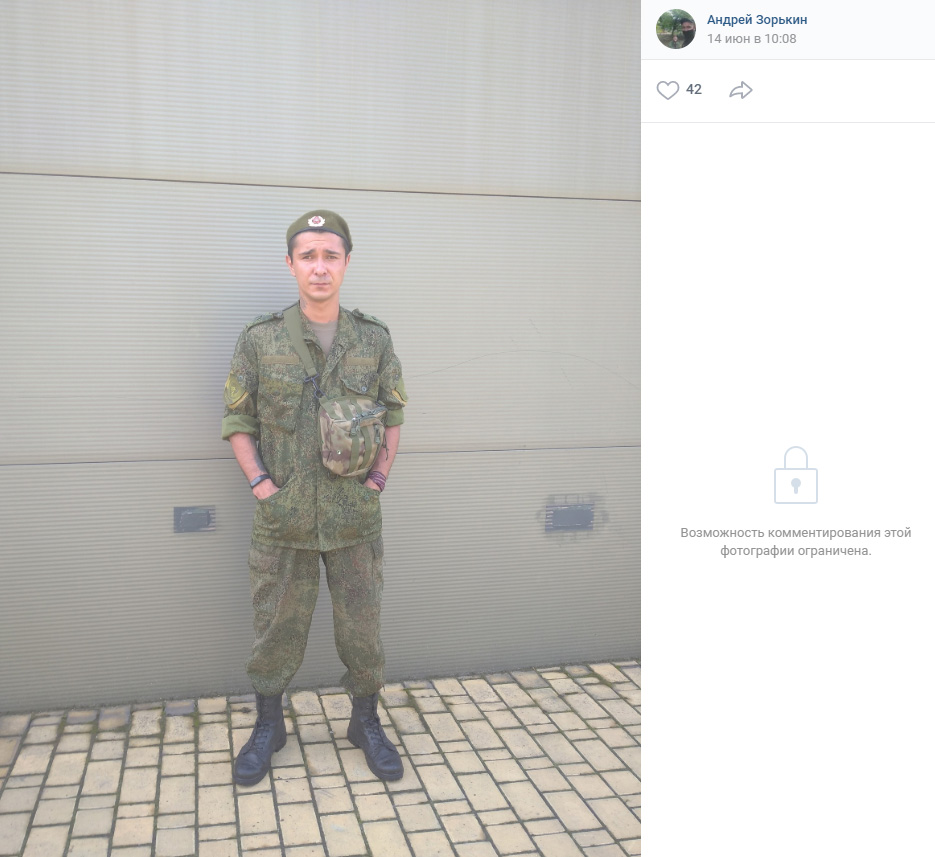 Here is another photo of him against the background of the “Donetsk People’s Republic” banner. It was posted by the Viktor Donetskiy account in June 2020, and Zorkin reposted it on his wall on the VK social network in July 2020. 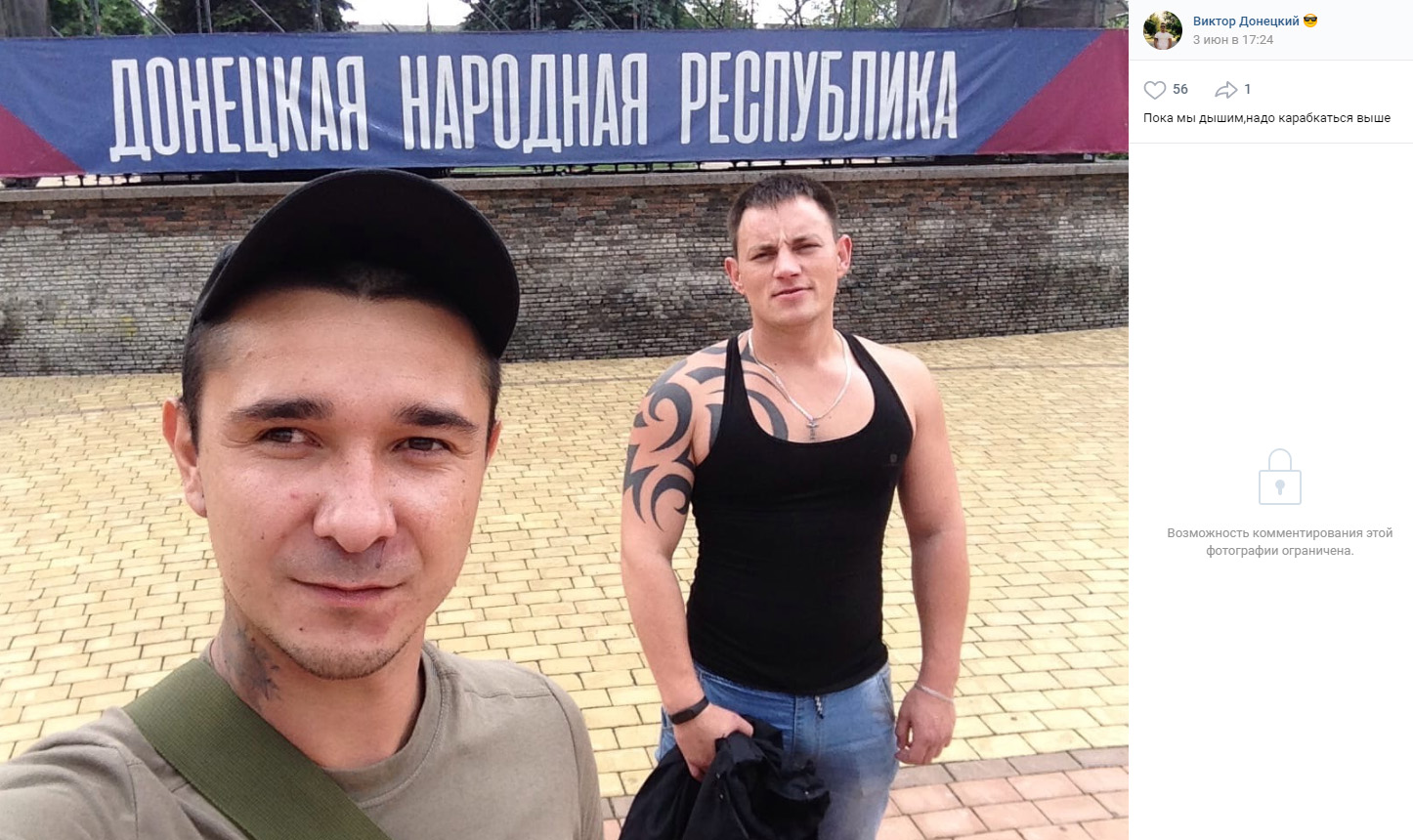 In his profile there is also a pinned post with a snapshot dated December 19, 2019, featuring a handgun and a duffel bag with a DPR shoulder patch. 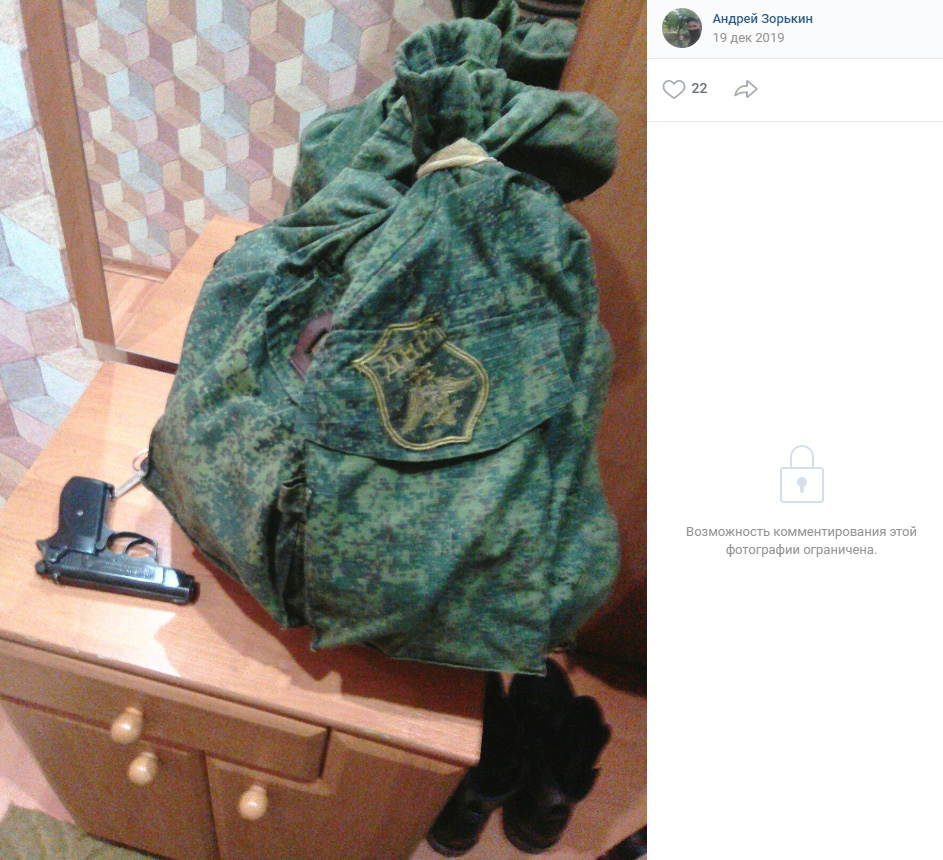 Zorkin’s social media accounts contained materials indicating that he has been serving under a contract in the Russian army since 2015, namely in the 19th MRB. His last military rank confirmed by photographs is that of a Sergeant. As of 2020, there is no information that would indicate his promotion to a higher military rank.

It has been established that Andrey Sergeevich Zorkin was born on April 27, 1994 in the city of Volgodonsk, Rostov Oblast. Judging by many signs (a photo with a military intelligence flag, a tattoo on his neck with a scout symbol – the bat, a photo with a Vintorez VSS sniper rifle for silent shooting, which is in service with Russian special forces), Zorkin was serving in the reconnaissance battalion or in the special-purpose battalion of the 19th MRB, which is part of the 58th Russian Army. 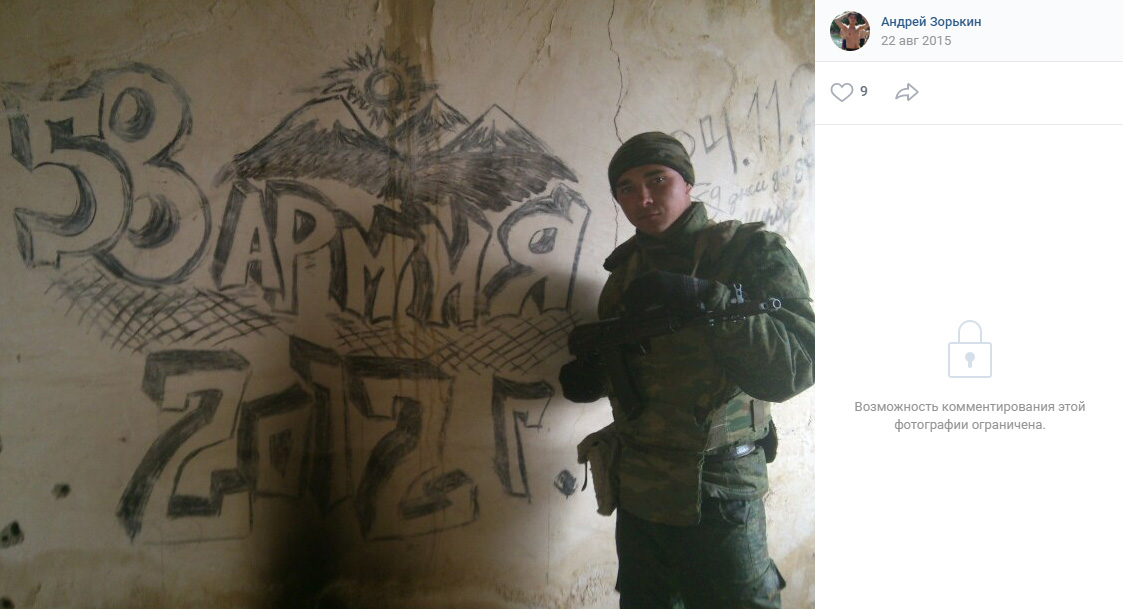 Photo near a graffiti with the words “58th Army” 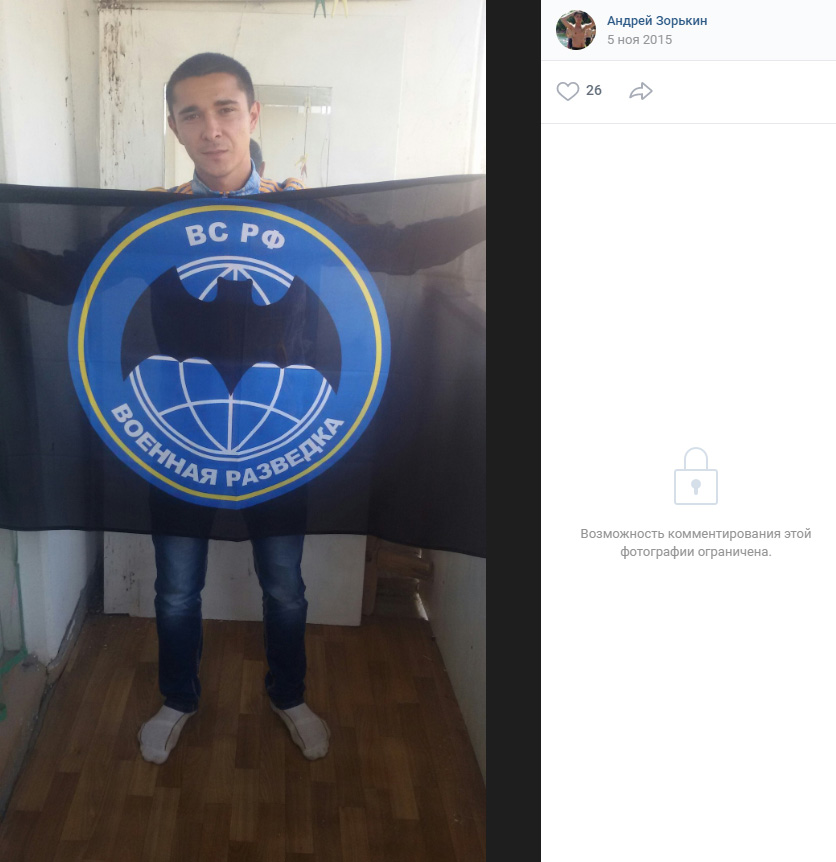 Photo with the flag of the military intelligence of the Russian Army. Also congratulations on the Day of Intelligence periodically appear on the wall in Zorkin’s account 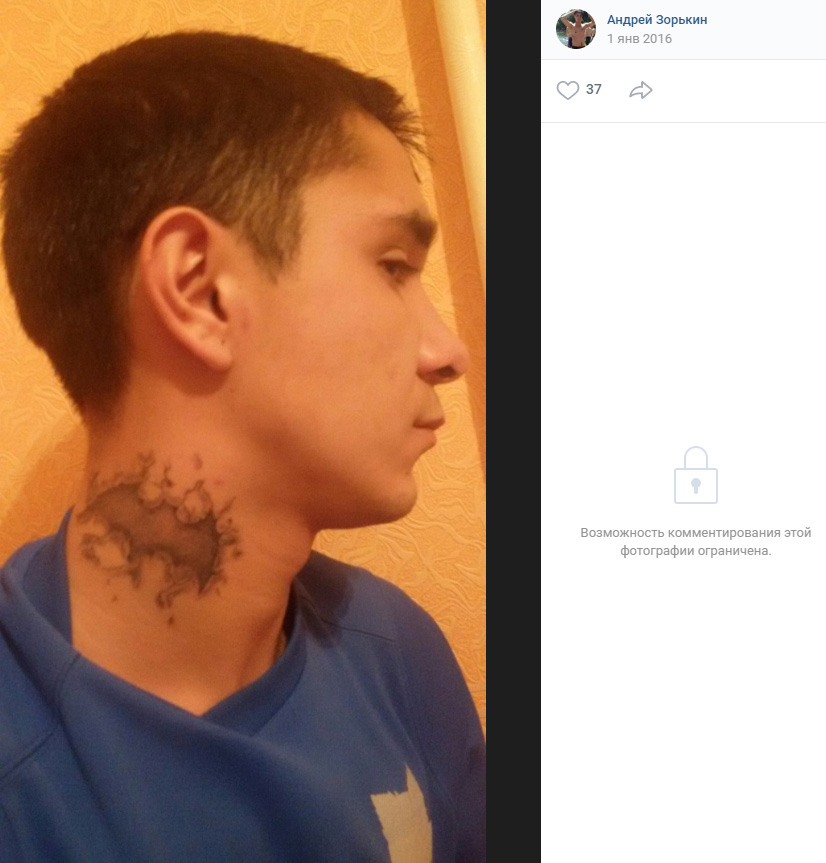 Specific tattoo on the neck: a bat, the symbol of military intelligence 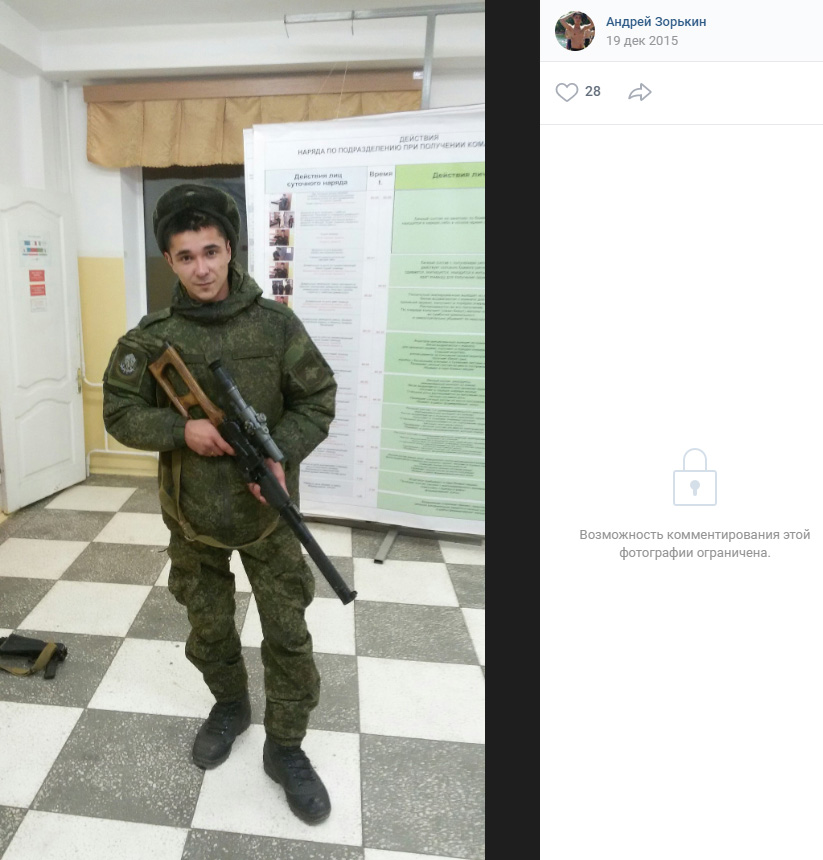 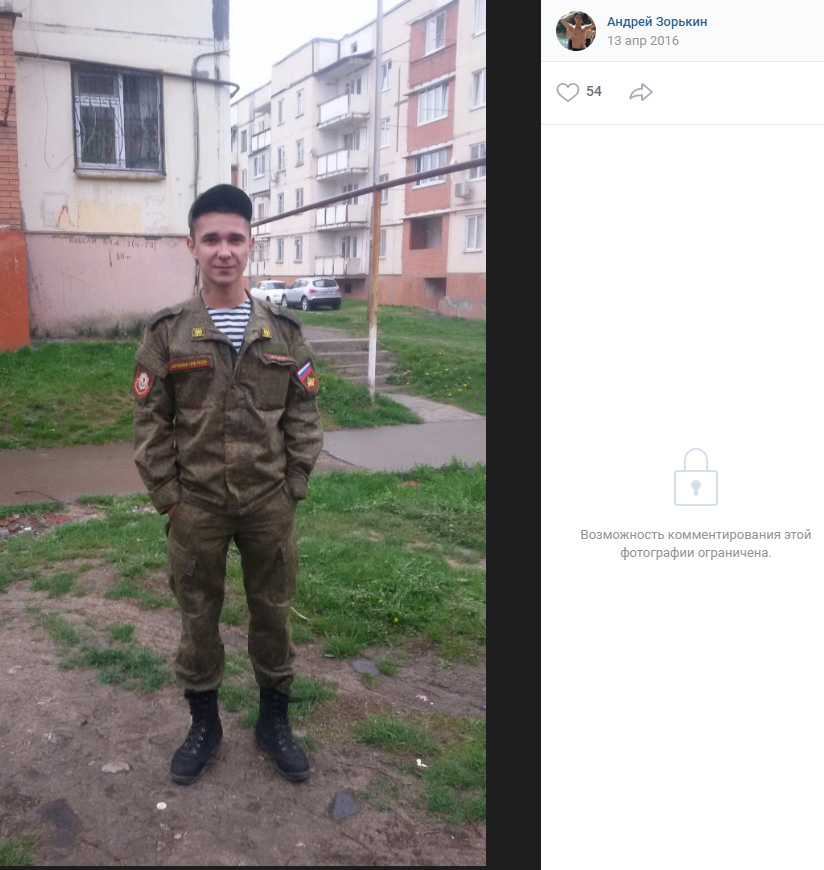 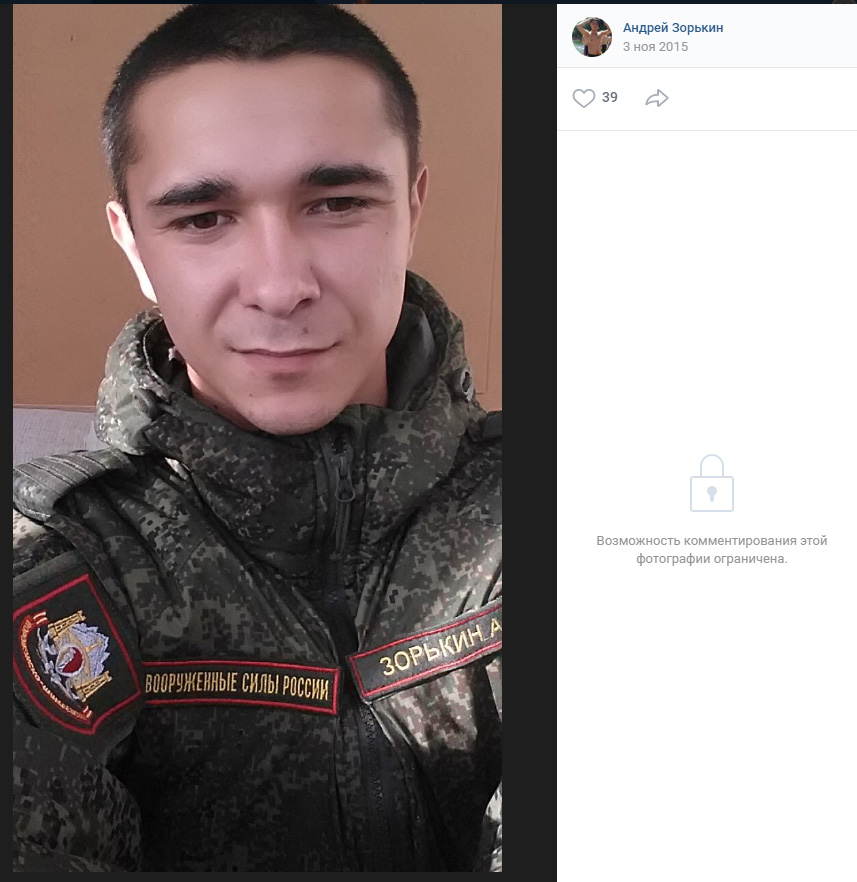 ·         Other photos, archives and social media pages of Andrey Zorkin 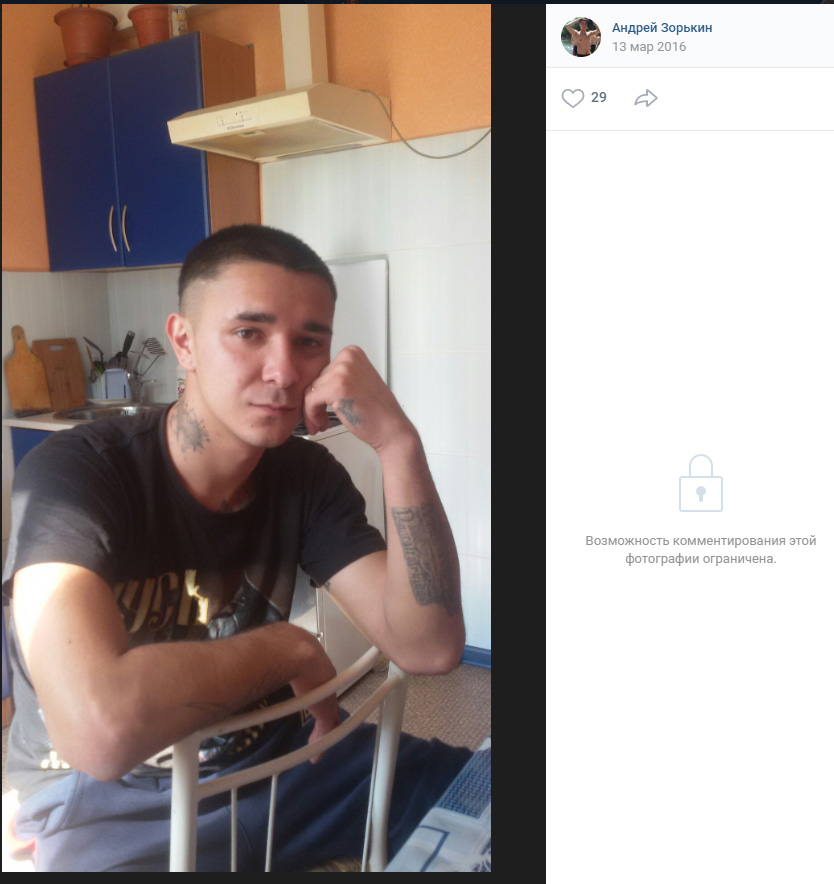 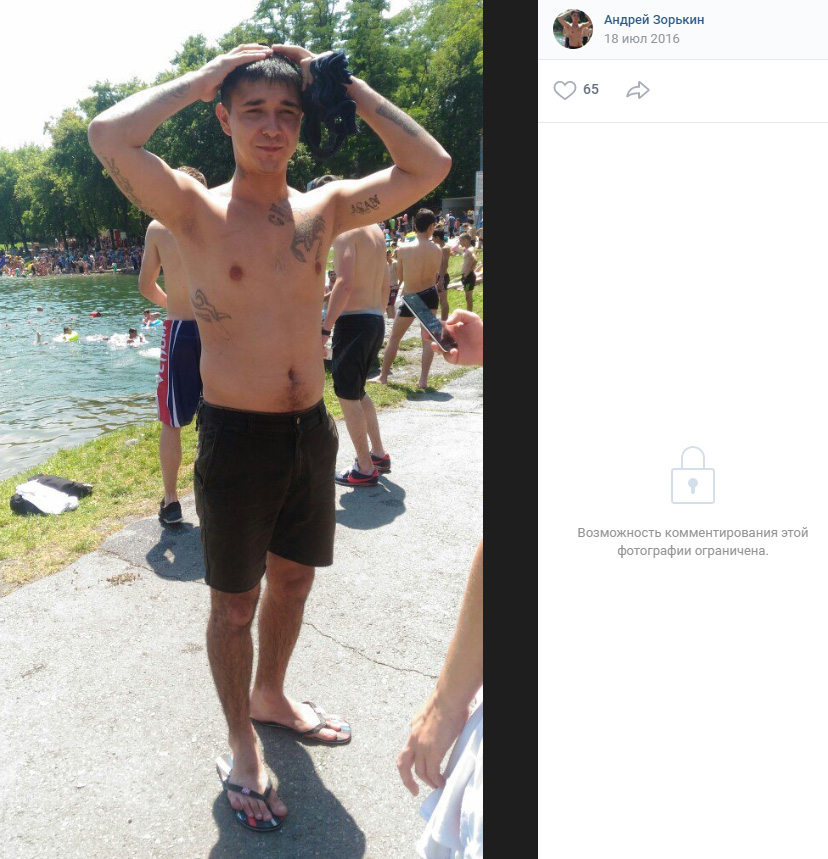 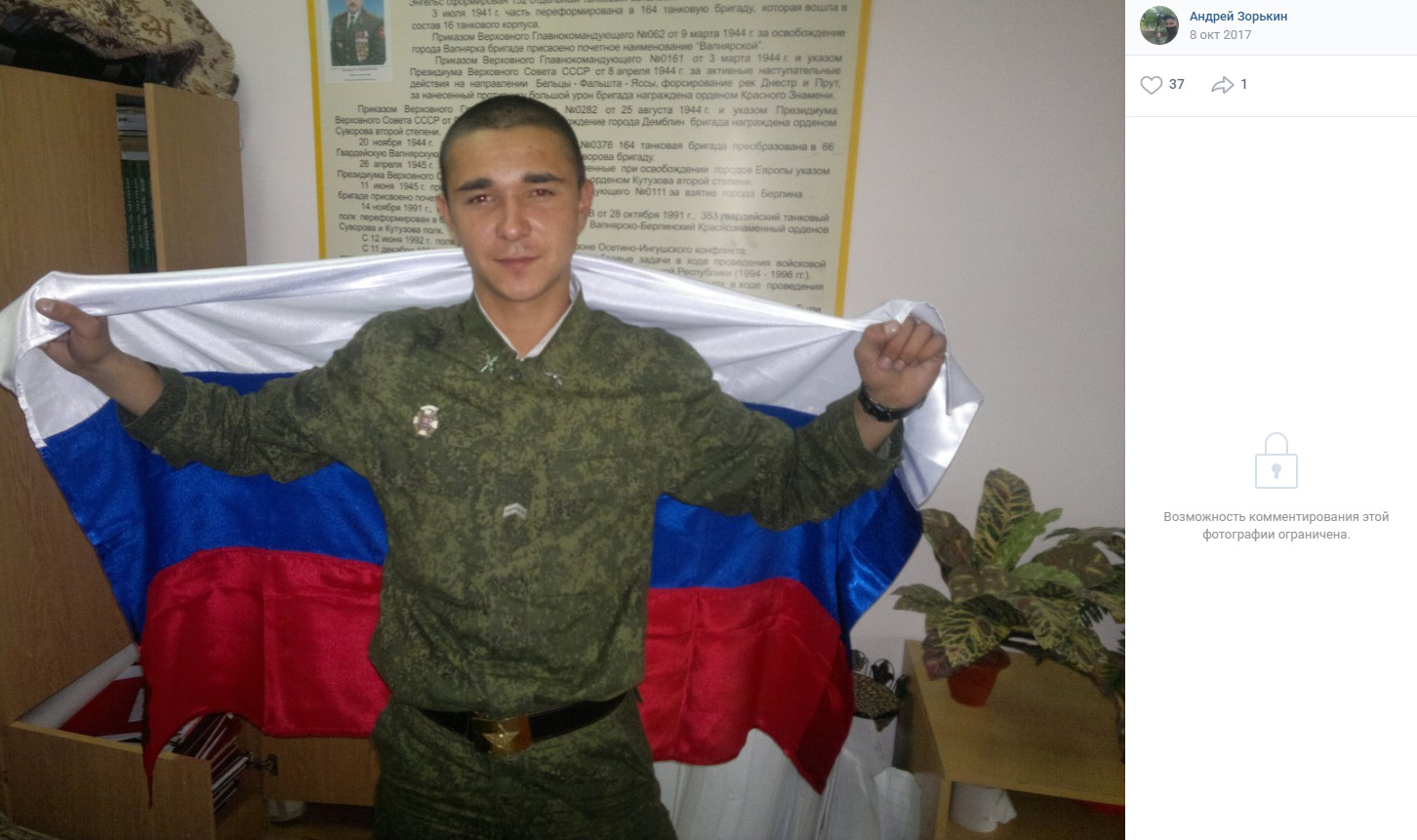 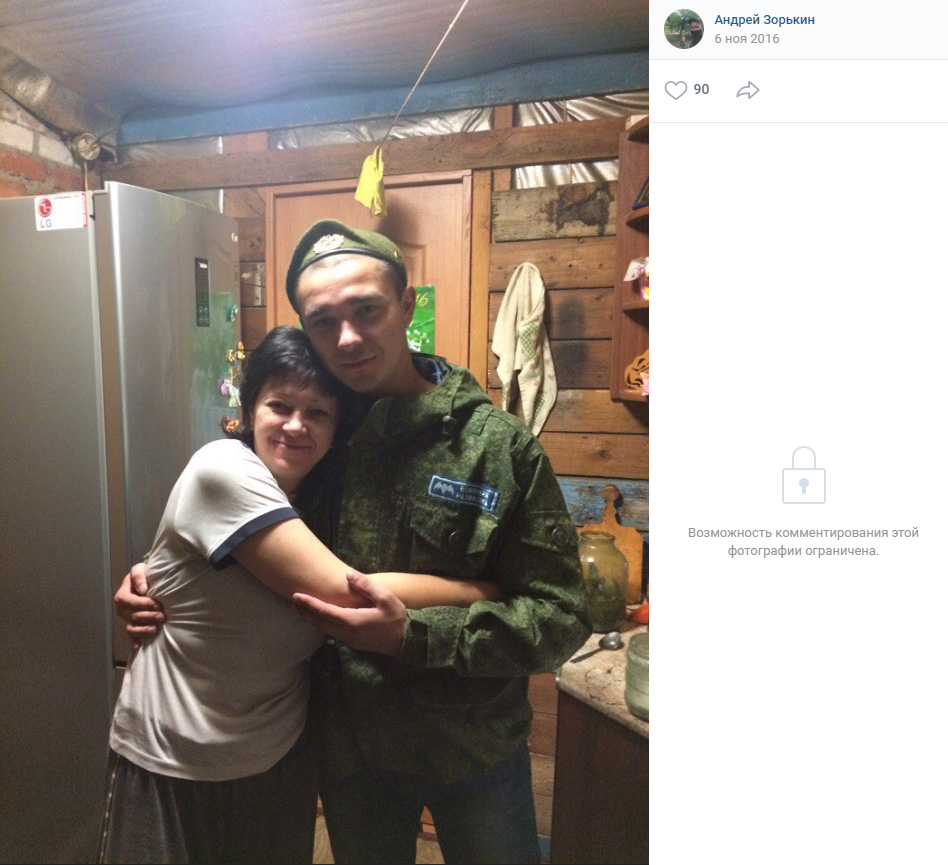 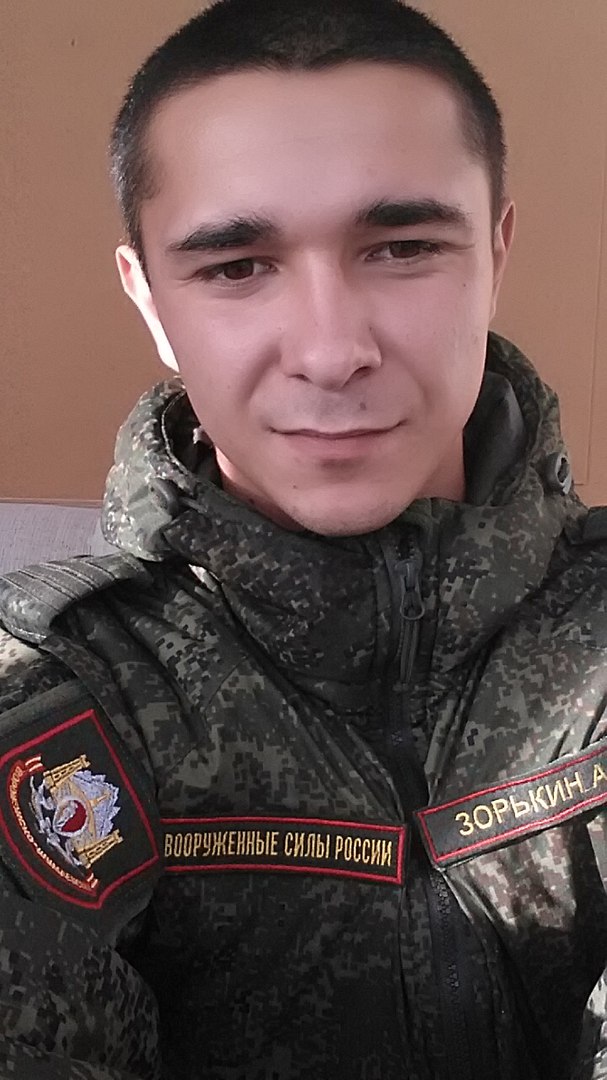 In addition to contract military service in the Russian Army, from 2016 to 2018 Zorkin also participated in mini-football competitions playing for the team of the Martynovsky Raion of the Rostov Oblast (archive). He even uploaded a snapshot of a newspaper page with his photograph (in the right corner) to his account. It gave us Zorkin’s verified data in the list of members of the mini-football team for 2018, confirming his full name. and the exact date of birth. 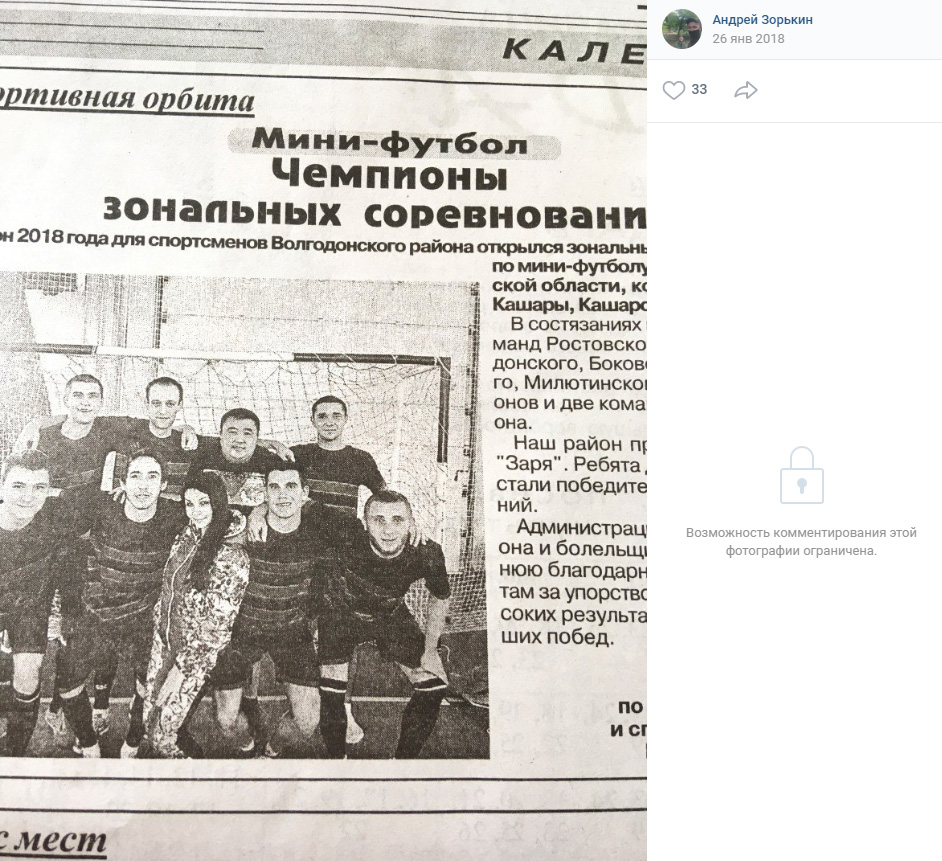 Zorkin is rather vain. He makes photocopies of regional newspaper clippings of his photographs and posts them on his page. Perhaps vanity was the reason why this Russian military intelligence serviceman of the 19th MRB posted his photo in front of a road sign with the name of a street in Ukrainian Donetsk where he was deployed on a combat mission. This OSINT investigation is bound make Zorkin even more (in)famous.

As of July 2020, the InformNapalm database contains evidence of the active participation of more than 2,600 professional Russian military personnel from 99 units of the Russian Army and law enforcement agencies of this country in the war against Ukraine. All this information was found through OSINT investigations, despite the strict secrecy orders of the Russian Ministry of Defense. From year to year, the Russian Ministry of Defense is constantly enforcing this regime trying to prevent the leakage of information which refutes the Kremlin’s rhetoric about the “internal Ukrainian conflict.” But very often, soldiers from the Russian hinterland, who for the first time see Ukrainian hryvnia, Ukrainian road signs or other objects that, in their opinion, can be shown to friends, promptly take pictures of them (and themselves) and post these pictures on social media.

In addition to the case of Sergeant Andrey Zorkin described in this material, InformNapalm volunteers have discovered in the course of this war evidence of the presence of 21 regular servicemen from the 19th MRB of the Russian Army on the Ukrainian territory. All these data are available on our in the investigations published on InformNapalm web site. Our volunteers identified both individual servicemen as well as entire groups, for example, from the sniper company and from the UAV company of the 19th MRB in the Ukrainian Donbas.

This is yet another case confirming that Russia continues to use its regular military personnel to reinforce and control units of the 1st and 2nd Army Corps in the Donbas.

InformNapalm is a fully independent community whose information resources are financed exclusively by volunteers’ own funds. We do not receive any financial support from any country’s government or large donors.

You too can assist InformNapalm in a variety of ways.