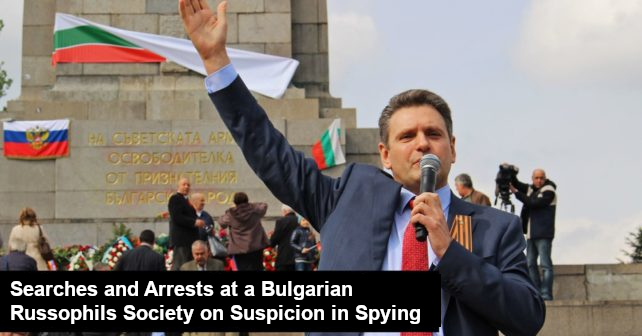 On September 9, the Bulgarian State Agency of National Security (DANS) and a Special Prosecutor’s Office have conducted searches and arrests in the offices and houses of members of a non-government organization called “The National Russophils Movement.”

The operation was conducted as a follow-up of the criminal case opening on July 3, 2019, based on the paragraph 105 of the Republic of Bulgaria Criminal Code.

Yuriy Borisov, a former editor of the Duma newspaper published by the Social Party pf Bulgaria who is currently the secretary of the Russophils, was arrested early in the morning of September 9. His house was searched, and his computers and various documents were confiscated. According to Borisov’s wife Dora Chichkova, he had suffered a heart attack several days earlier and is not feeling well. After an interrogation at the Special Prosecutor’s Office, Borisov was released.

Nikolay Malinov, the President of the Russophils, stayed in custody for another 24 hours. Malinov was born in Sophia on September 12, 1968 and studied history at the Kyiv State University. He was a member of the Executive Bureau of the National Council of the BSP (Bulgarian Socialist Party), and a delegate to the 40th and the 42nd Congresses of the People’s Assembly. In Russia, he is representing the TV channels, Channel 1, The Global Network, The TV Center, and Hunting and Fishing. In 2011, president D. Medvedev of Russia awarded Malinov with the Order of Alexander Pushkin. In 2017, Manilov was decorated with the Order of the Russian Society for Development of Education in History, The Double Headed Eagle. This society is chaired by a Russian oligarch Konstantin Malofeev in a direct cooperation with Leonid Reshetnikov. 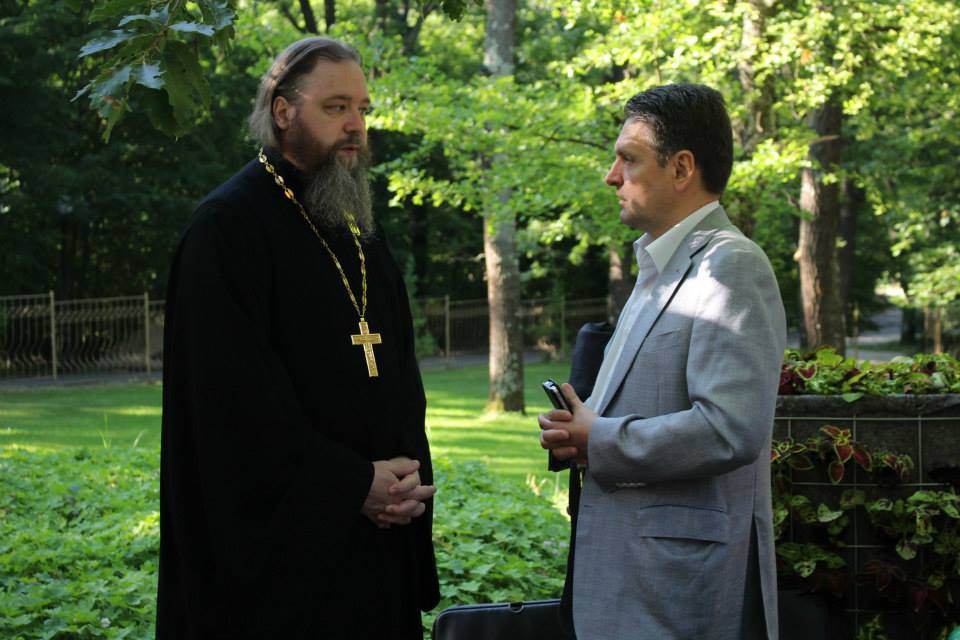 Other activists of the organization and members of its leading committee (“executive bureau”) were also questioned: professor Vanya Dobrev – a member of the BSP People’s Assembly and a Russiphils’ activist; Milen Chakarov, the Russophils’ Vice-President; and Encho Moskov, an Honorary Head of the organization. Christina Ivanova, the organization’s General Secretary, was also interrogated as a witness.

Zhivko Georgiev, a sociologist, was interrogated as a witness. He told the Bulgarian media that he had been asked whether he knew Leonid Reshetnikov and whether he conducted sociological surveys of geopolitical opinions in Bulgaria at Nikolay Malinov’s request.

The prosecutors had no comment at that time. Nikolay Marinov, the Bulgarian Minister of Interior, said that the investigation was still on and that the information would be presented at a press-conference on the next day.

According to the Russophils official Web site, they are a non-government civic organization, chartered in Sophia on January 19, 2003 with the main goal to develop friendship and cooperation between Bulgaria and Russia. It says on the site that “the national Russophils movement is the largest non-government organization in Bulgaria. As on September 2016, it has 224 local community centers and over 35,000 members.”

Bulgaria, indeed, is a country that is one of the most vulnerable countries of the European Union when it comes to the Russian hybrid aggression. A range of pro-Russian organizations are located and act on its territory. When a number of countries kicked out the Russian diplomats as a gesture of solidarity with Great Britain after the poisoning of the Skrypals [(father and daughter who were British subjects suspected by Russians in spying)], the government of Bulgaria abstained, arguing that they did not receive enough evidence in favor of the Russian special services being linked to the poisoning. Representatives of political parties from Bulgaria visit a variety of conferences in Moscow, as well as conferences held in the Russia-occupied Crimea.

One week ago, the Ministry of Foreign Affairs of Bulgaria reacted sharply against the provocation by the Russian Federation attempting to distort history. The Russian embassy announced that it would open an exhibition in Sophia where the September 9, 1944 coup-d’état would be presented as the “Liberation of Bulgaria,” while in fact it was the date when Bulgaria was occupied by the Soviet troops during WW2. The note by the Bulgarian Ministry of Foreign Affairs said: “While we do not deny that the USSR made its contribution into the defeat of Nazism in Europe, we also should not remain blind to the fact that the Red Army’s bayonets brought half a century of repressions, stifling of the civic conscience, deformed economy, and split from the dynamics of European countries’ development to the peoples of Eastern and Central Europe.”

At a joint press-conference, the Prosecutor’s Office and the Ministry of Interior of Bulgaria stated that the prosecutors have accused Nikolay Malinov in spying for a foreign country. He was released on a 25,000 Euros bail. He is forbidden to leave the country. Sotir Tsatsarov, the Prosecutor General of Bulgaria, said that “the foreign organizations we are talking about, the ones we have documents on, proving that Malinov worked for them, are located in the Russian Federation. I mean two organizations, the Double Headed Eagle Society and the Russian Institute of Strategic Investigations.” Also, the investigation has revealed the scheme of money laundering and money transfer to finance the various enterprises that are a concern to Bulgaria’s national security. Leonid Reshetnikov, a citizen of the Russian Federation, is banned from entering the Republic of Bulgaria for 10 years.

Picture: the head of the Russophils movement near the monument to the Soviet Army in Sophia