Secret cargo of the Russian “humanitarian convoys” passing through Makiivka 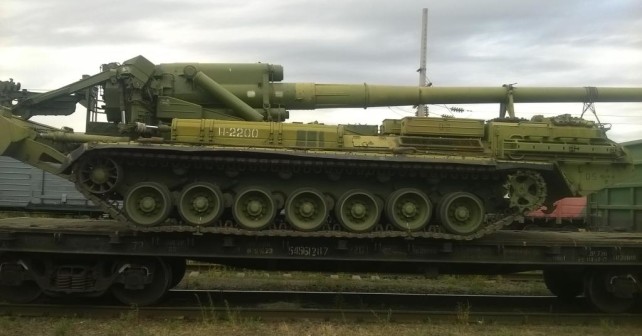 Makiivka’s position in the direct vicinity of Donetsk makes it a strategic location for the Russian occupation forces concentration. Besides, Makiivka is also important as a hub for the forces approaching the Debaltseve salient from Vuhlehirsk. That is why the armament types passing this area could provide valid clues helping to forecast the further possible enemy activity. So far, we have detected only offensive types of armament deployed by the Russian Federation in this area.

On January 30, 2014 we detected 2 convoys consisted of 6 main battle tanks (MBT), 3 infantry mobility vehicles (IFV), 1 armored personnel carrier (APC), 3 Nona-K self-propelled mortar, 15 KamAZ-5350 Mustang and Ural-4320 military trucks, 2 presumably command vehicles. All the vehicles in the convoy are marked with the white identification circles. Two T-64 MBTs have standard equipment, but the explosive reactive armor positions on four T-72 MBTs are of interest. Unfortunately, poor quality of the video does not allow to accurately determine the reasons for the modifications. Apparently, the Russians decided to reinforce turret front protection by adding blocks of the explosive reactive armor. This indirectly proves general weakness of the Soviet MBT armor as well as the skills of Ukrainian artillerymen. 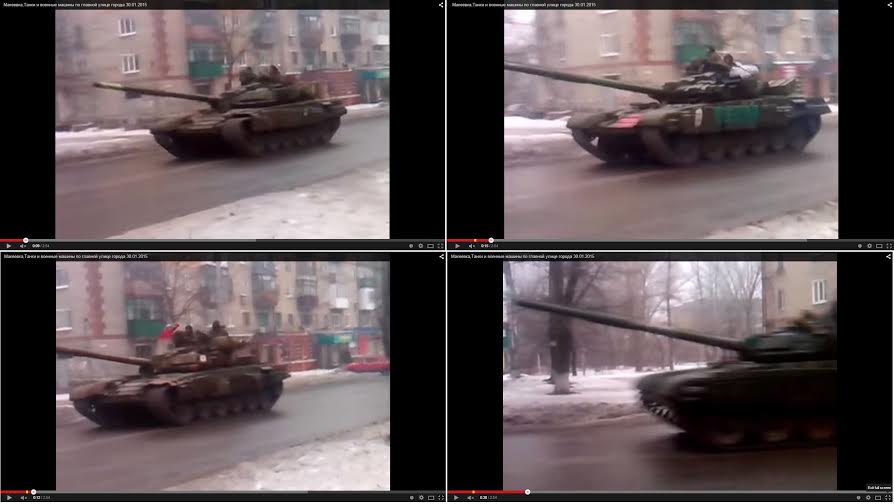 All the military equipment is unmistakably of the Russian origin. But the presence of … the humanitarian fuel truck in the military convoy is very unusual. This is the first case documented by InformNapalm of the Ministry of Emergency Situations and Ministry of Defense of Russian Federation cooperating on the territory of Ukraine, although we mentioned such possibility several times. The footage shows they are not only positioned at the same bases, but also take part in the same operations.

Many information agencies noticed the movement of 2S7 Pion SPGs convoy. To be more precise, those were modernized 2S7M Malka SPGs that passed through Makiivka. Russians were quick to label those armaments as left by Ukrainian soldiers on the battlefield. Lost Armor provides us with vivid examples of the lies spread by the Russian media.

We only need to examine the facts about Malkas passing through Makiivka to see the truth. One of the self-propelled guns has a painted over number (presumably 222) in the middle of its right side. There was no SPG with that number listed between the machines restored for the army of Ukraine. Also no machine with this number has been mentioned on Lost Armor records as captured.

Cabs of separatists’ SPGs also bear strange inscriptions. They are hardly distinguishable but resemble traditional Russian “H-2200” markings. There are no such markings on Ukrainian equipment.

The peculiarities of large caliber SPG deployment excludes the any possibility of being left behind on a battlefield. At the time, the main reason for Ukrainian military to demothball that kind of armament was the possibility to fire in a range up to the 45 km, that is beyond the 20-kilometer corridor determined by the Minsk agreements. According to the available data, Russian soldiers never advanced so deep into Ukrainian territory in any of the battles since January. That is why it is absurd to claim that those SPGs were abandoned on the battlefield.

Finally, it is claimed that these SPGs were sent to Luhansk, which is located on the opposite from Makiivka side of the front line.

Thus, all the talk about the capture of these SPGs from the Ukrainian Army is nothing but Russian propaganda aimed at covering up the real origin of this equipment.

If the fact of dispatching 2S7M Malka SPGs by Russian Federation to the war zone is proved, the rest of the convoy puzzle pieces together (besides 2 SPGs there is a 1V16 command vehicle and a KamAZ truck for transporting of explosive cargo). It is worth reminding that not a single information outlet reported on these SPGs being captured from the Ukrainian Army.

2S7 Pion SPG is capable of delivering fire with nuclear ammunition on targets deep in the Ukrainian territory. There are nuclear power plants within their range. Ukraine has no nuclear ammunition, unlike Russia. Taking into account the deceitful stance of the official Kremlin on Ukraine, no one can possibly guarantee there will be no ammunition of that type in one of the next Russian trucks. Who would be held responsible for the eventual use of the nuclear ammunition? Maybe “separatists”? Considering reckless and deceitful recent policies of the Russian authorities this scenario seems quite possible. Therefore, the silence of the European countries about the appearance of Russian Malka SPGs in the East of Ukraine looks rather strange. Do they really have guarantees from the OSCE observers that tomorrow these SPGs equipped with nuclear ammunition will not cause another Chernobyl?

This publication was prepared by the video monitoring expert Al Gri specially for INFORMNAPALM.ORG. An active link to the authors and our project is obligatory for any reprint or further use of the material. Read more from this author.