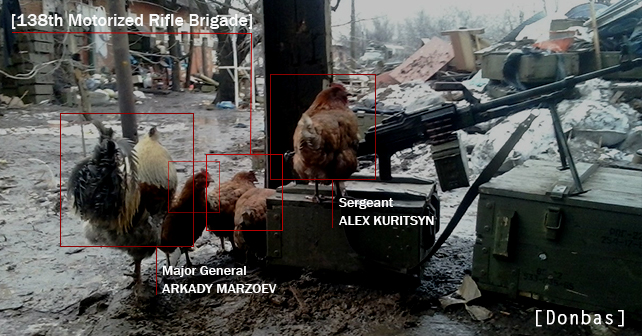 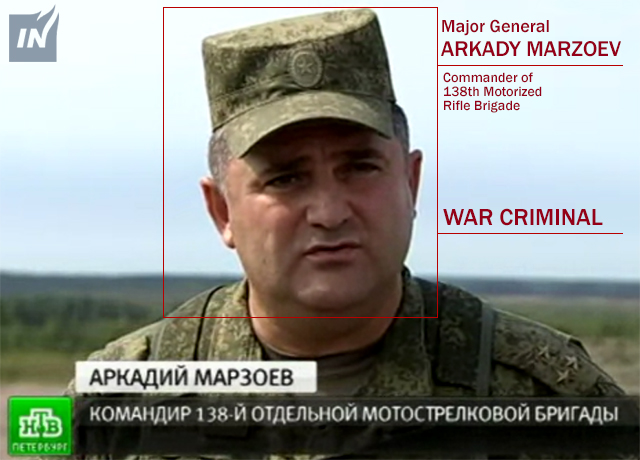 The 138th Separate Motorized Rifle Brigade of the Russian Ground Forces includes various units: anti-aircraft missiles and artillery battalions, reconnaissance, infantry, and tank battalions.
Since 2014, Major General Arkady Marzoev has commanded the brigade (he was promoted to the rank of Major General by Presidential Decree #73 on 02.20.2016). Previously, he commanded a Spetsnaz GRU group and a Spetsnaz company. He also held senior positions in the 58th Army and has extensive combat experience in “hot spots” (archive), In March 2016 he was awarded the Order “For Military Merit” by a Presidential Decree (archive). Perhaps, his subordinate soldiers and officers have demonstrated that “military merit”. In this investigation we talk about air defense servicemen who came to the attention of the InformNapalm volunteers.

Instead of a prologue

Information about 14 (fourteen) soldiers was disclosed. Immediately after the publication they hastily attempted to remove the traces of their crimes on social networking websites. But all of the files have been saved; InformNapalm retains all of the information in the database that is constantly refined and augmented.

Alexey (aka Artiushin), real name – Kuritsyn (archive of the profile, contacts, album) was one of the subjects of the previous investigation. His real name was written in the certificate to the Medal “For the Distinction in Military Training” signed by the commander of the military unit 02511 Major-General Marzoev. 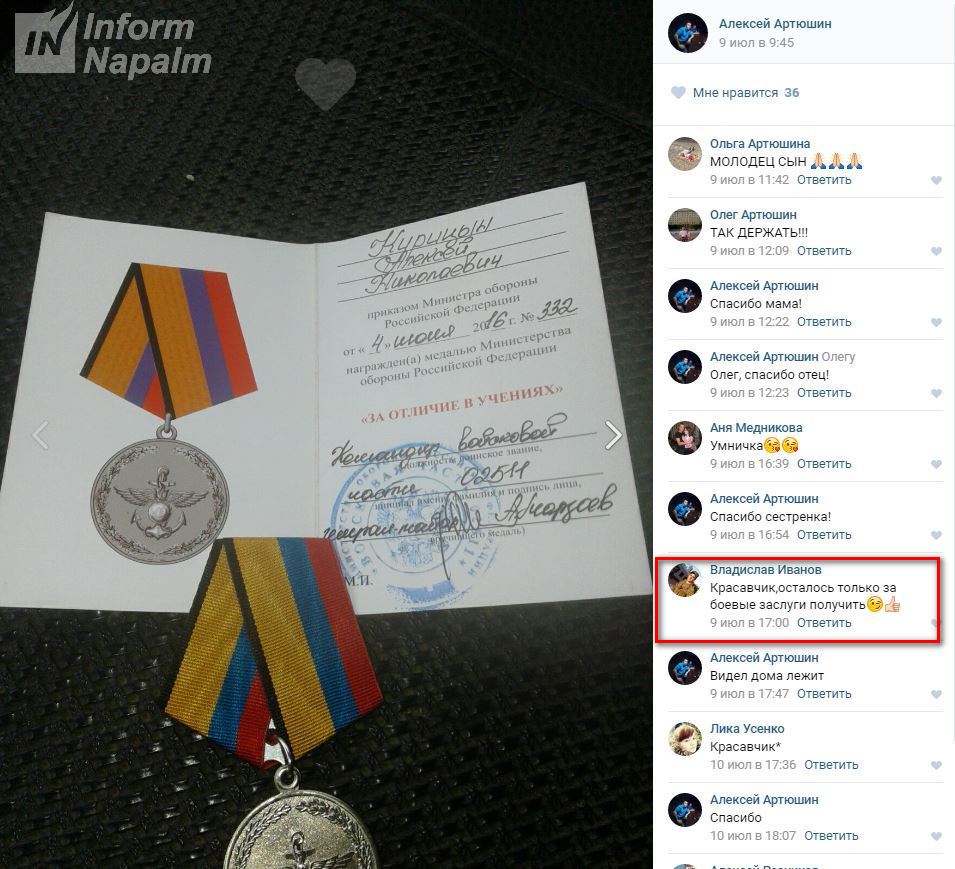 It should be emphasized that according to his military card, Kuritsyn has been in military service since 07/14/2013, and grew to the rank of junior sergeant.  His military contract was to expire in October 2016. 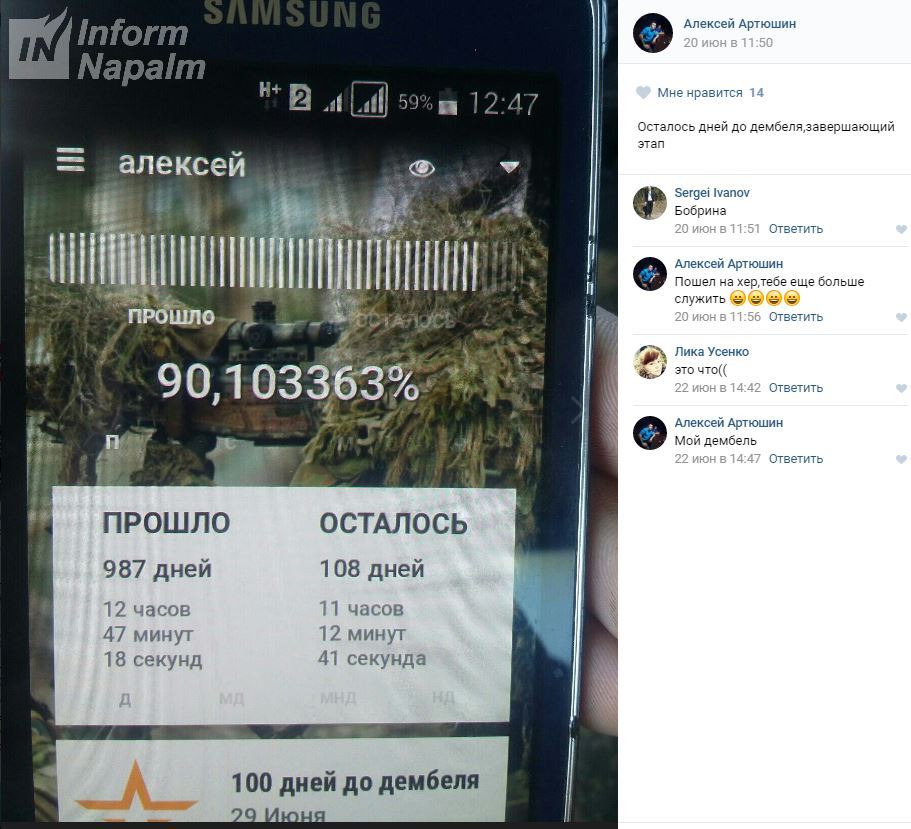 It is this strange “medal for training”, in which Kuritsyn allegedly participated in Rostov Oblast, that drew attention of the InformNapalm volunteers. We have investigated his friends and contacts and his combat “distinctions” that were acknowledged by his military unit commanders.

Among his colleagues we found another Russian soldier distinguished in “training” – a contract serviceman from Kamenka Sergei Yashkevich (archive of the profile, album, contacts). 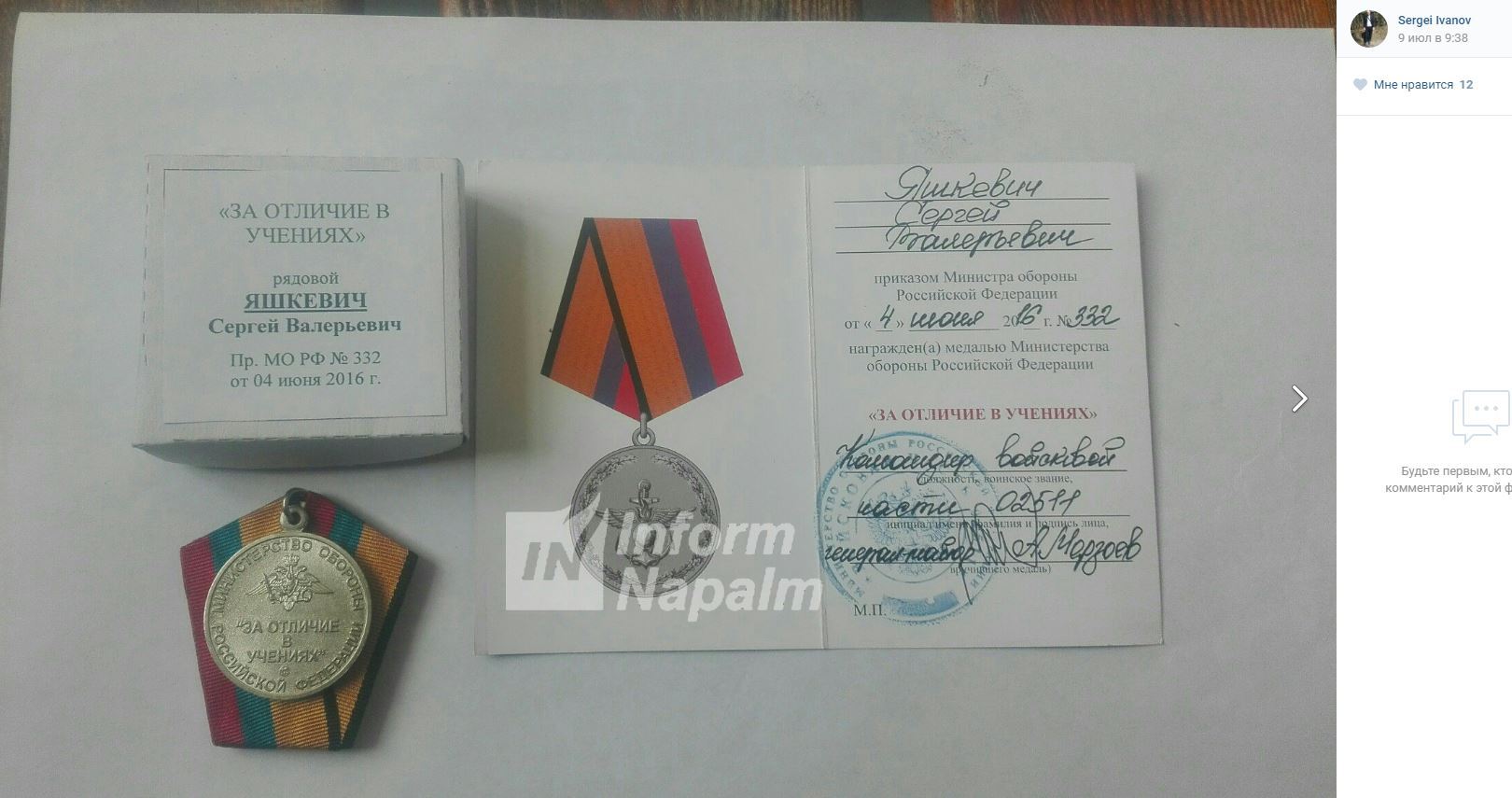 After the thorough examination, we found Yashkevich’s second account on VK (archive photo).

We want to note that a duration of the deployment of the 138th Separate Motorized Rifle Brigade to Rostov Oblast was quite lengthy. We recorded its presence in Rostov Oblast back in March 2015. Apparently, departure of some contract servicemen to their home base occurred in February 2016. A photo from Yashkevich’s album taken in a second-class train car indicates it. Aforementioned Alexey Kuritsyn is also shown in another photo. 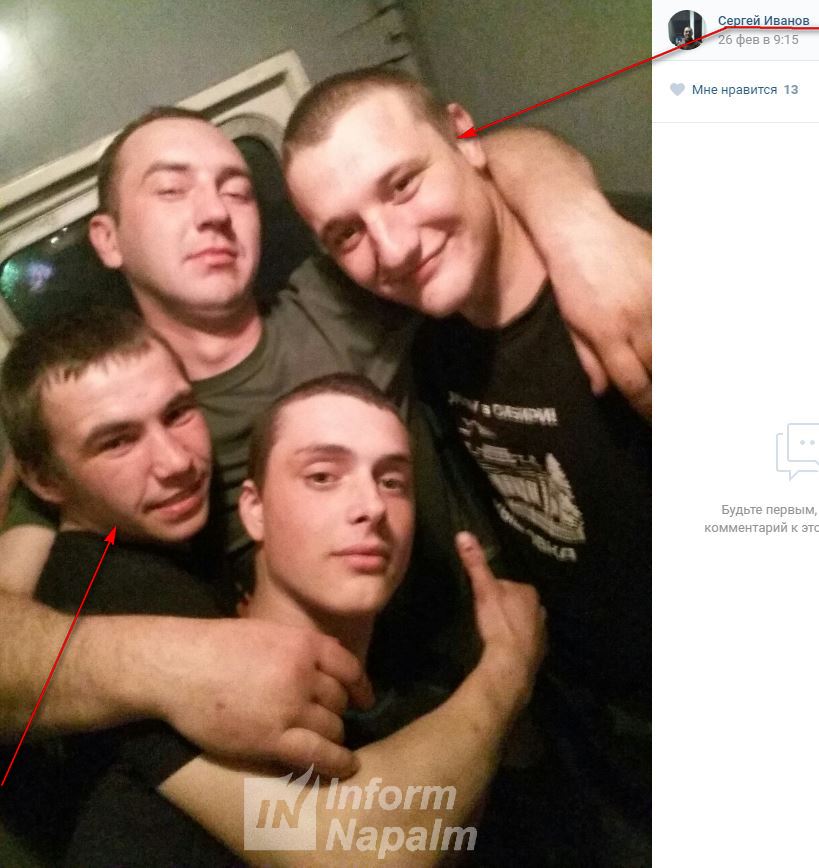 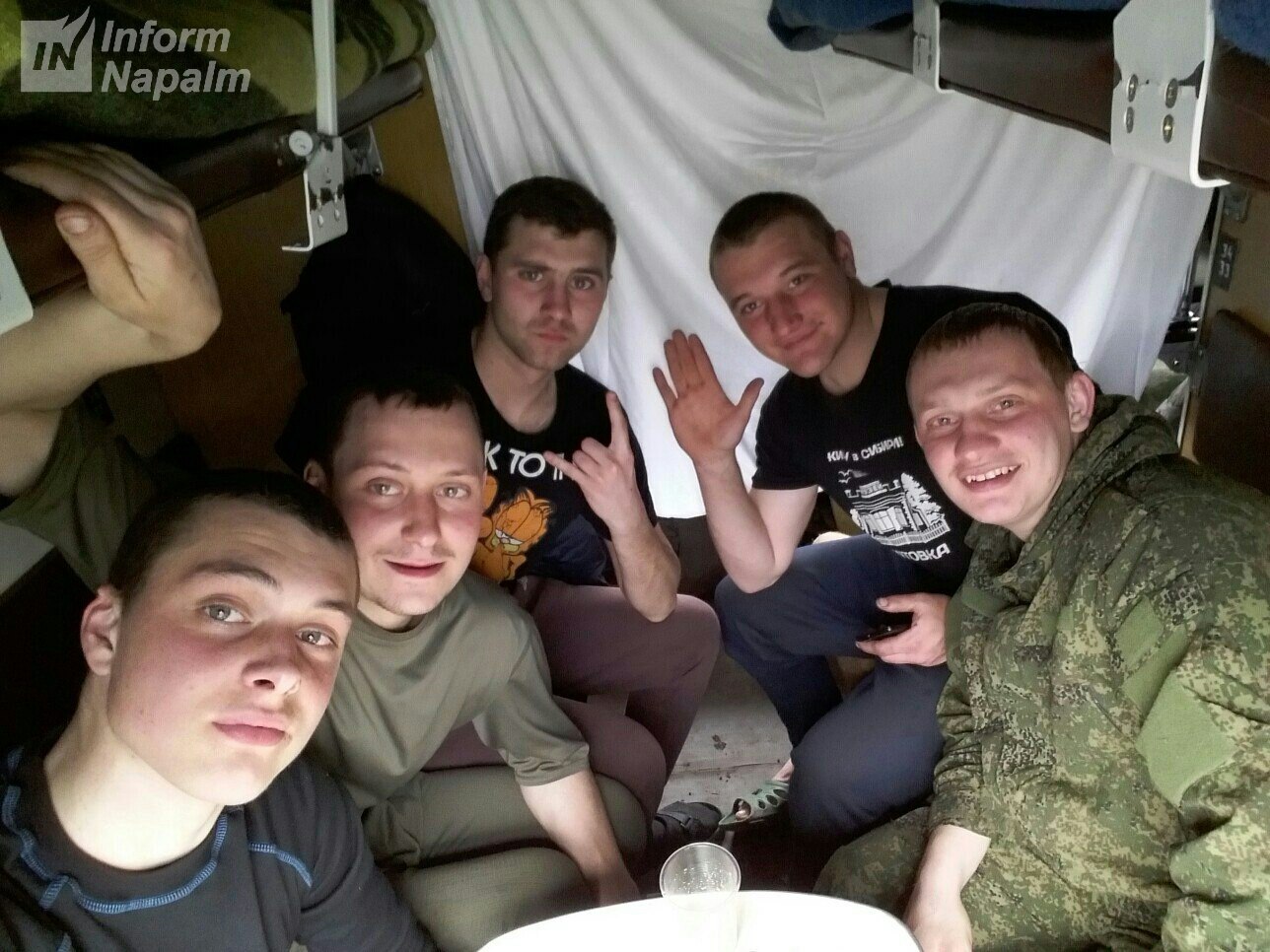 On February 26, 2016, private Yashkevich received a letter of recognition for “the strong performance in combat training and exemplary military discipline during the exercises at the training range Kuzminsky in Rostov Oblast” signed by Major General Marzoev (photo 1, photo 2).

But the “training” was not limited to the training range in Rostov Oblast. A photo taken on the streets of Ukrainian Donetsk indicates it, as well as some other photographs.

In spite of geolocation of some pictures, we gave identified the exact location where they were taken. The photo from the album of Yashkevich was taken on the known to the InformNapalm investigators Sechenov Street, which is close to the base of air defense troops of the 1st Russian Army Corps (coordinates 47.996942,37.8571026). A door arch and the roof of a nearby-located cafe “Ryabinushka” indicate that. 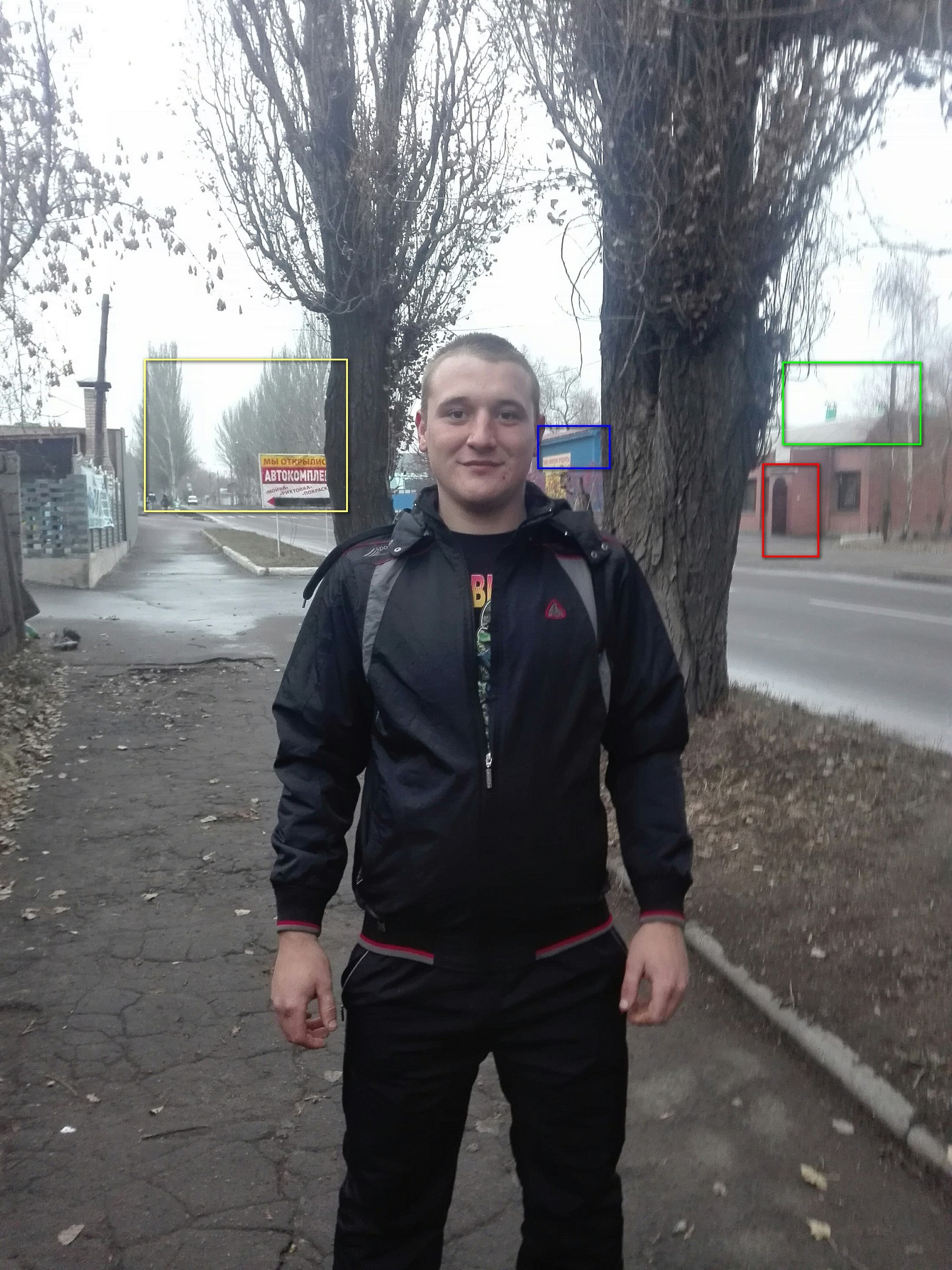 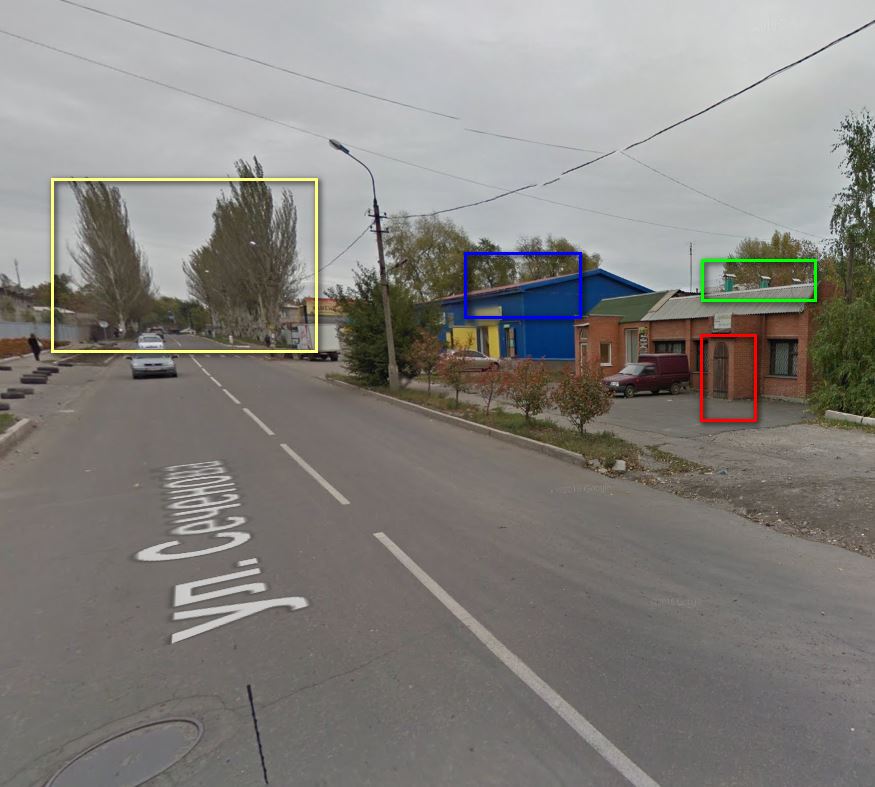 The original photo was uploaded in December 2015, which corresponds to the warm beginning of winter in 2015.

In addition, there are some group photos of soldiers from the 138th Motorized Rifle Brigade in Donetsk: 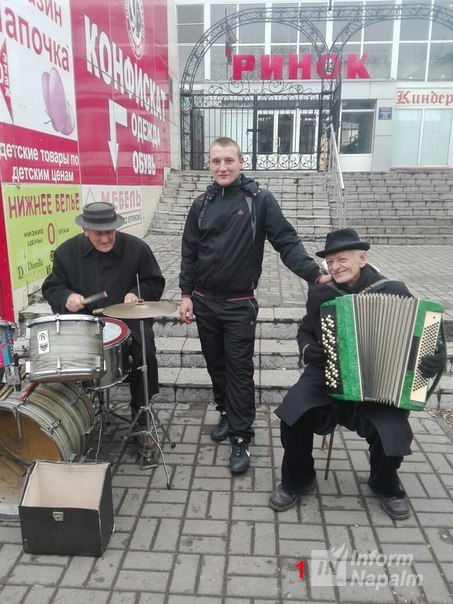 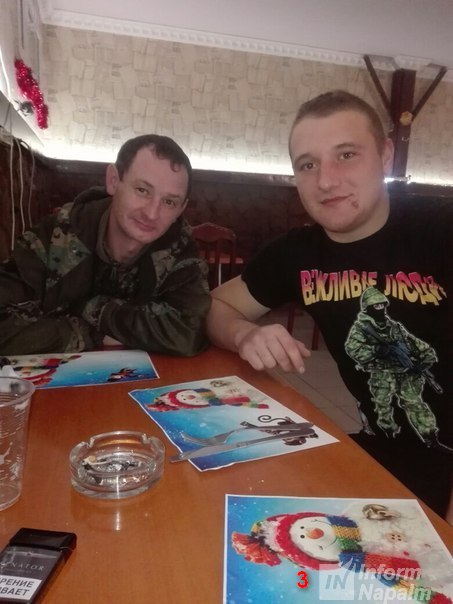 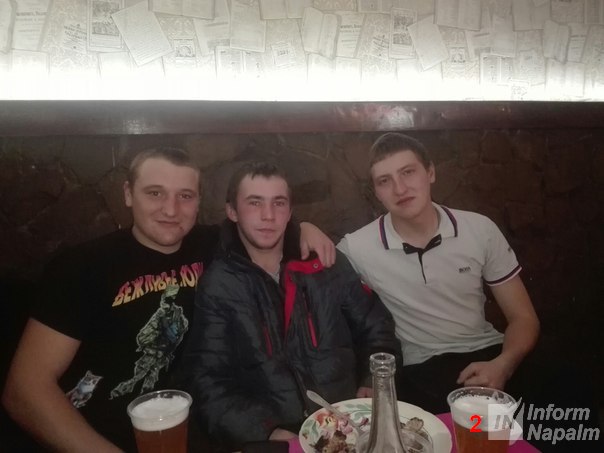 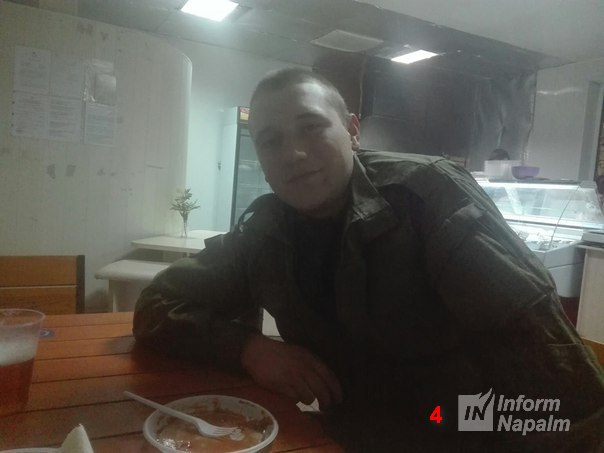 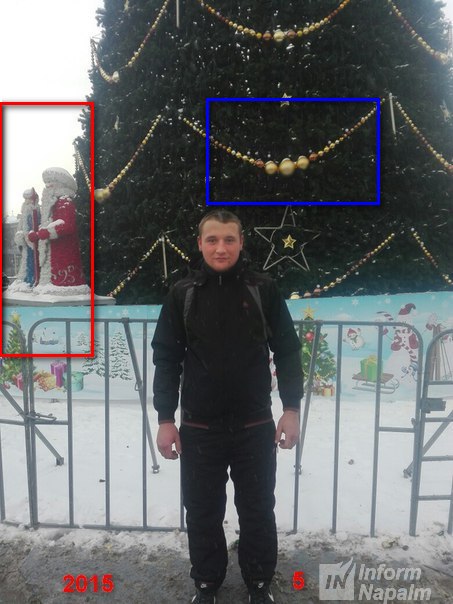 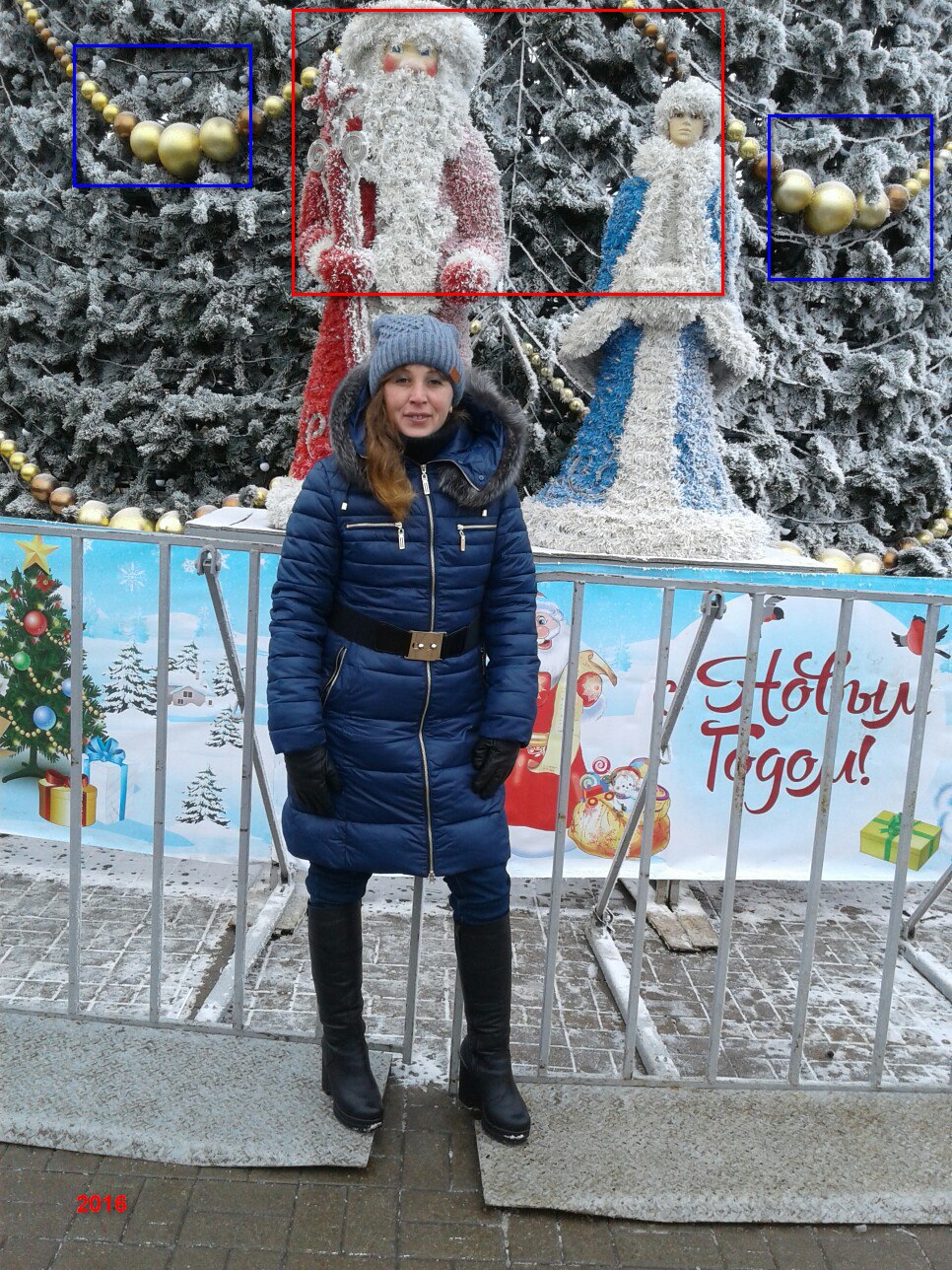 Senior Warrant Officer Gennady Bakhmatov (archive profile, album, contacts) – his account user name Genacid speaks for itself about what Russian military does in foreign countries – was also awarded the strange Medal “For the Distinction in Military Training” for participating in the war in Donbas by the same order №332 from June 4, 2016, like the others in this investigation. 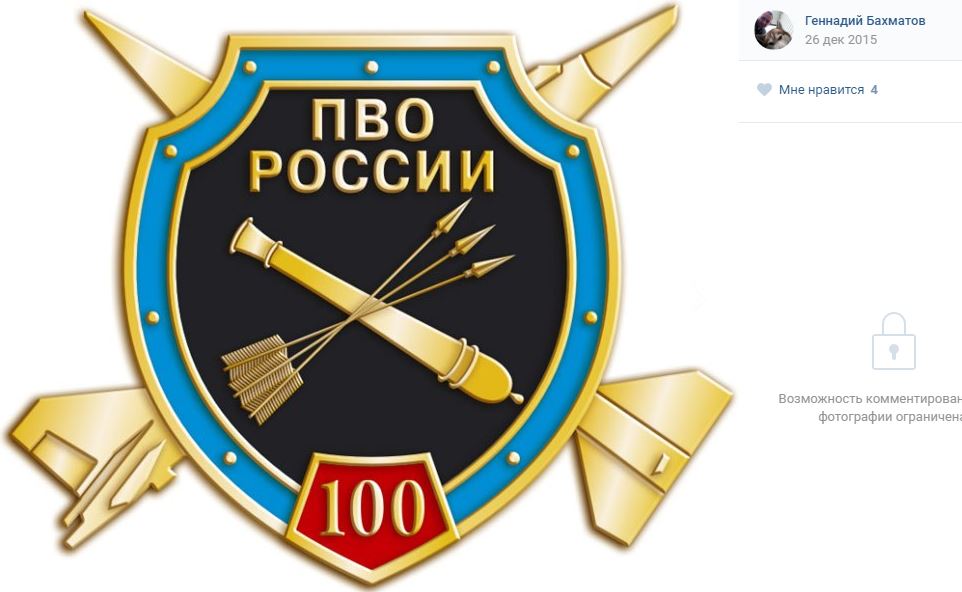 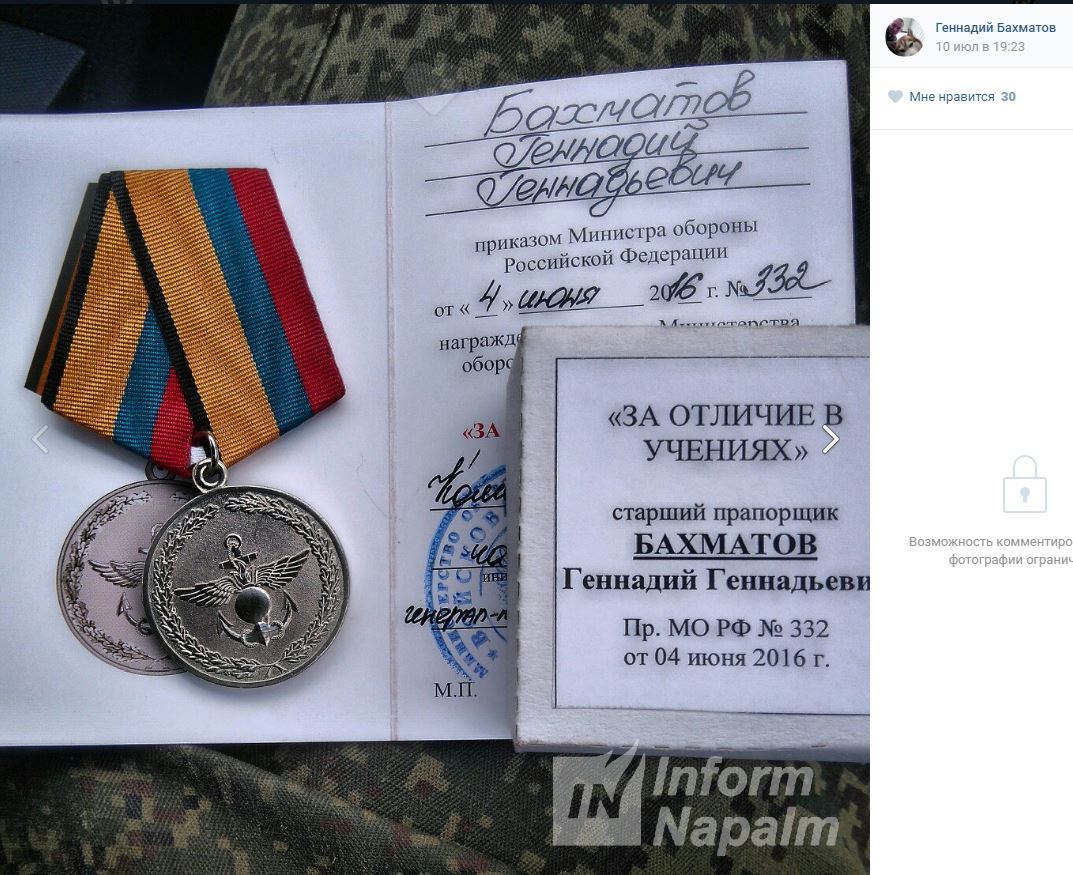 Both “medalists”, Yashkevich and Bakhmatov, took a memory photo in their military unit in Kamenka. 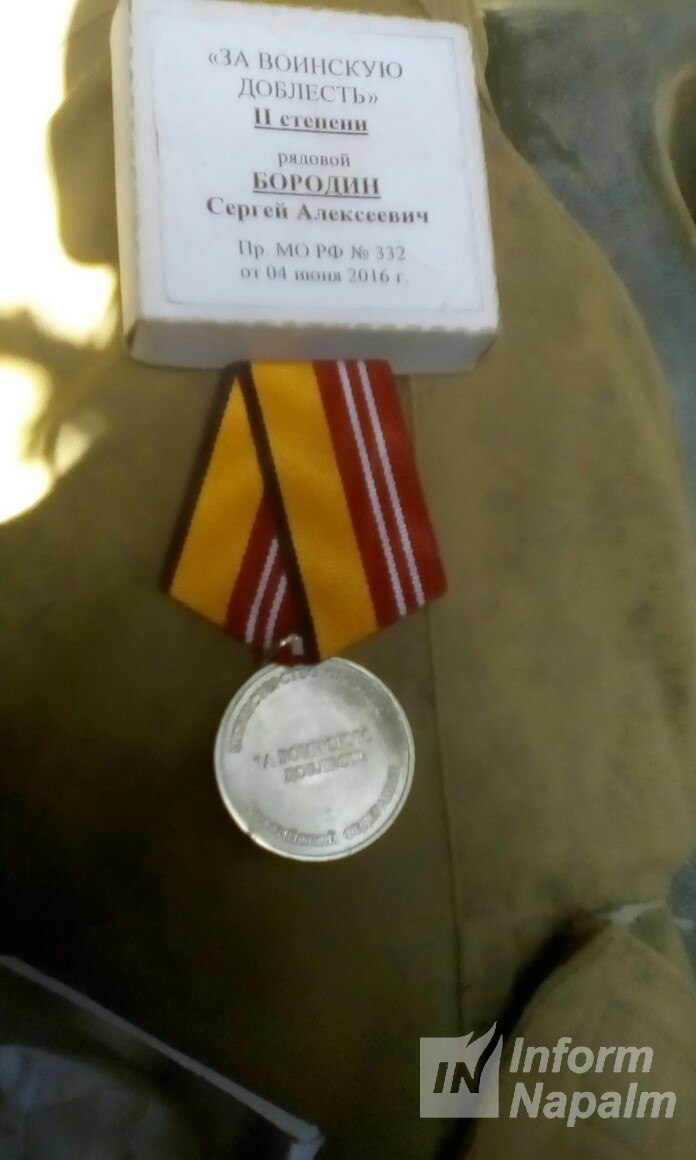 Private Sergei Borodin (archive of the profile, album, contacts), unlike the others, was awarded a medal “For military valor» of II degree.

As stated in the caption to the medal, Borodin “has shown” courage, selflessness and other “valors” in the performance of military duty. He “proved” himself fighting illegally in the territory of a sovereign state, being assigned to the army air defense troops of Russian invaders in Donetsk.

What else can we say about Russian “distinguished” defense servicemen?
Unfortunately, among the Russian Ministry of Defense awards there is no any medal “For the capture of sauna”. It would have been handy in this case, since the servicemen of 138th Motorized Rifle Brigade were “bravely performing their duty” in Birch Grove  sauna in Donetsk. Thanks to Yashkevich’s photo report, we have learn about it, too. There are a few photos to confirm the filming location. 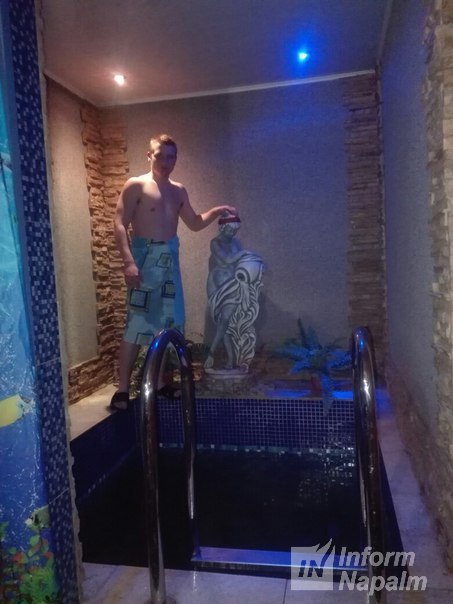 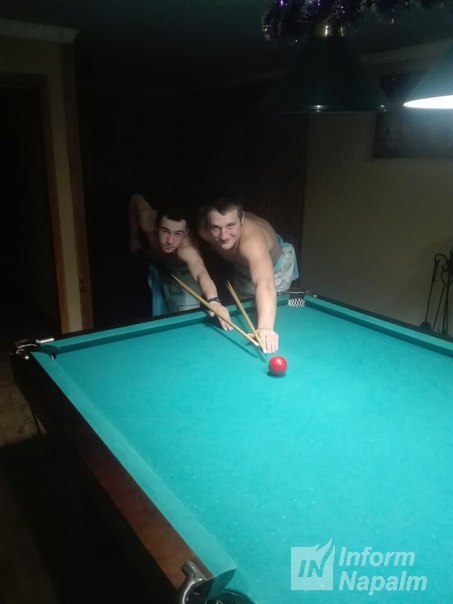 It is noteworthy that during 2015 – 2016, InformNapalm noted the use of the Russian Tor missile systems in the Donbas (1, 2). Common collaborationists could not use this type of modern Russian weaponry. We also noted the presence of these anti-aircraft missile complexes in the camp of the 138th Separate Motorized Rifle Brigade. This suggests that the presence of Russian air defense servicemen in Donetsk and the use of the sophisticated equipment may be connected.

Behind the vague word “training” the Russian command hides the fact that they use occupied territories of Ukraine as a training range to practice combat fighting skills. The presence of Russian military personnel and the awards received by them once again points to it.

Recall that we presented the evidence of Russian aggression to the parliamentary Assembly of NATO in Istanbul in November 2016.

We continue collecting and recording the evidence. If you want to join InformNapalm international intelligence community and become one of the OSINT-investigators or volunteer interpreters, contact us through our page on Facebook.

This article was prepared for publication based on our own OSINT-investigation. Written by Victory Krm. Translated by Andrii Gryganskyi. Edited by Svitlana Kemblowski.