Stanislav Yezhov acted in Russia’s interests since his service at Ukrainian Embassy in the U.S. 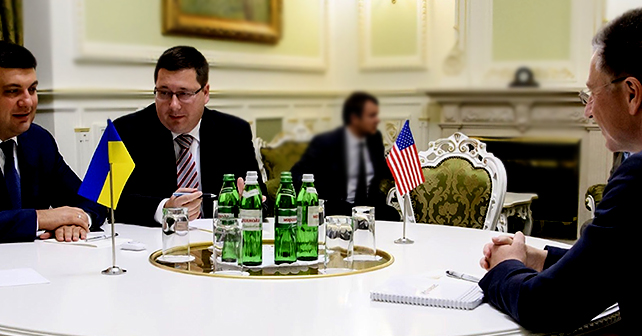 At the time when Russian troops seized Ukraininan Crimea and began the occupation of Donbas, Stanislav Yezhov was working as a Counselor in the Embassy of Ukraine in Washington, DC. He often met with the American establishment, but instead of promoting the interests of Ukraine who fell a victim of the Russian aggression, Yezhov was spreading  Russian myths and denigrated the reputation of the newly elected Ukrainian leaders. InformNapalm has gathered evidence of Yezhov’s long-term subversive activity against Ukraine and bolstering Russia’s interests. This activity began as early as the end of 2013.

“Law enforcement agents found that the official was recruited by the Russian intelligence services during an extended business trip abroad. SBU agents documented that the official was collecting information on government activities under the instructions from the Russian supervisors with the aid of special equipment. The offender transmitted the received data to his supervisors electronically.”

Yezhov is charged with high treason in accordance with Chapter I Article 111 of the Criminal Code of Ukraine.

From their own sources InformNapalm volunteers discovered that the “extended business trip abroad”  implies Yezhov’s work as a Counselor to the Embassy of Ukraine in Washington, DC at the time when Oleksandr Motsyk was the Extraordinary and Plenipotentiary Ambassador of Ukraine to the USA.

Stanislav Yezhov is a career diplomat. He got his master’s degree in 1999 from the Institute of International Relations of Taras Shevchenko National University of Kyiv. Before becoming a Counselor at the Embassy Yezhov worked at Ukraine’s Ministry of Foreign Affairs and served in the diplomatic mission in Slovenia 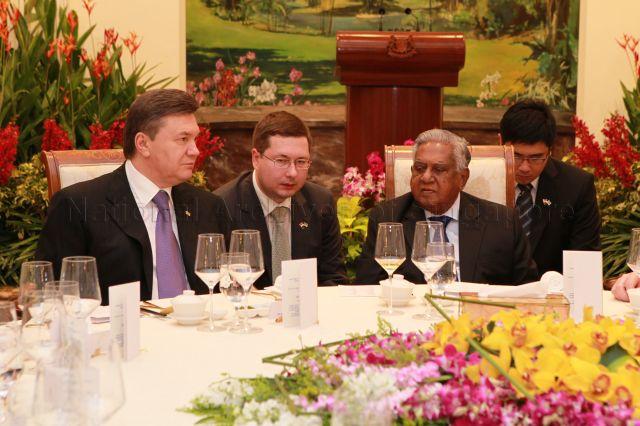 Yezhov’s service at the Ukrainian Embassy in Washington, DC coincided with two most difficult years for Ukraine – 2013 and 2014. During Euromaidan protests and especially after the seizure of Crimea by Russia and the start of the war in Donbas Ukraine desperately needed support from other countries, first and foremost from the United States. In those difficult days diplomats had to work 24/7 to prove the facts of the Russian aggression, to earn support from the allies and to negotiate for financial assistance. Ukrainian treasury was emptied by Yanukovych and his associates, the army was underequipped and catastrophically underfunded, lacking the essentials: body armor vests, Kevlar helmets, rifle scopes, camo uniforms and medical supplies, especially hemostats.

“It was at this time that Yezhov, while meeting informally with the American establishment, instead of promoting the interests of Ukraine, was spreading Russian myths: divisions between West and East, the civil war in Ukraine, Ukrainian radical nationalists who decided to destroy the Yanukovych regime out of the blue, and so on. In comfortable conditions, over the dinners with grilled salmon, Yezhov was confidently telling these stories to the Americans. And the majority believed them – why wouldn’t they believe the official representative of the Ukrainian Embassy in the U.S.?”

Yezhov did not particularly hide his views about the new government in Ukraine, and it is unlikely that other embassy employees did not know about them, let alone the intelligence. Why they did not  check Yezhov for possible ties with the Russians – that is the big question. Maybe they simply did not want to bother, and maybe it was deliberate sabotage.

Not only did Yezhov openly express his position, but he also posted the defamatory content in his social network accounts. Thus, Vadim Labas, the Head of the Analytical Department of Oberig NGO, published a series of screenshots with posts and photos from Yezhov’s OK profile, which he shared during Euromaidan protests: 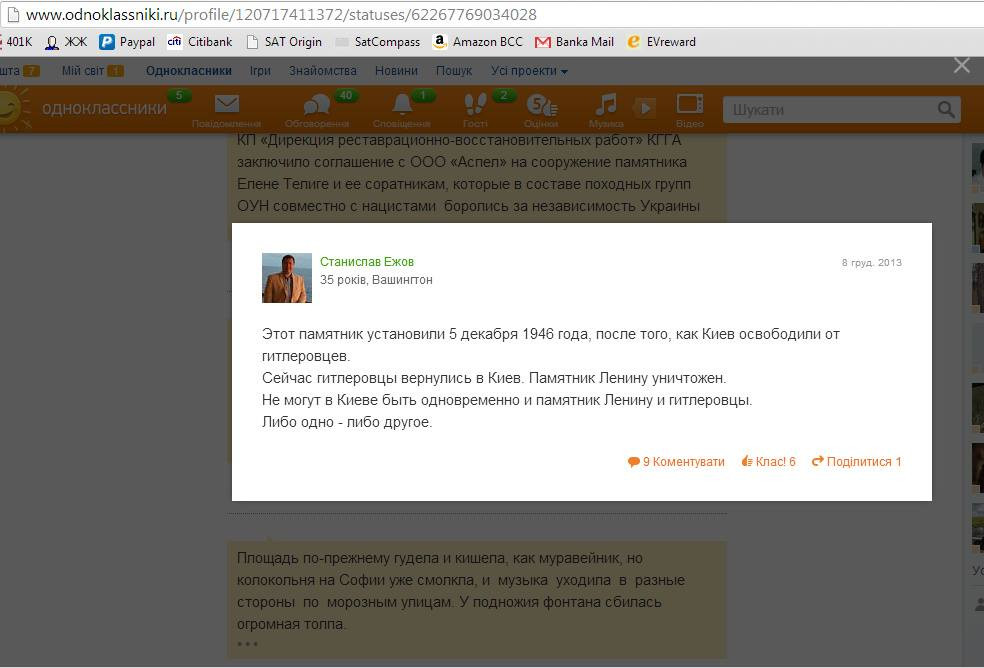 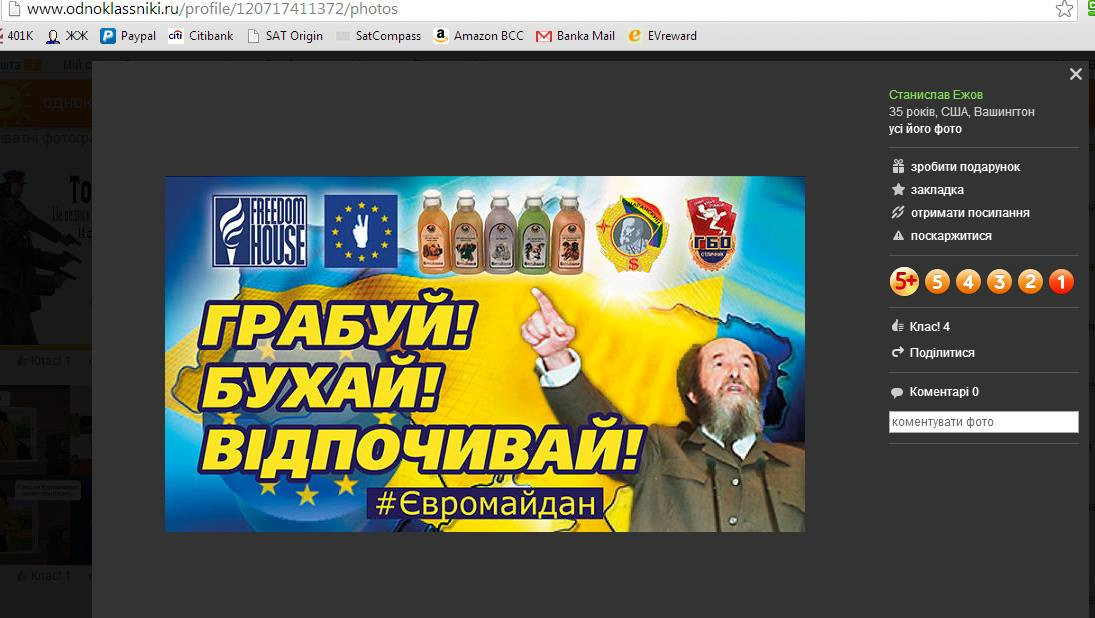 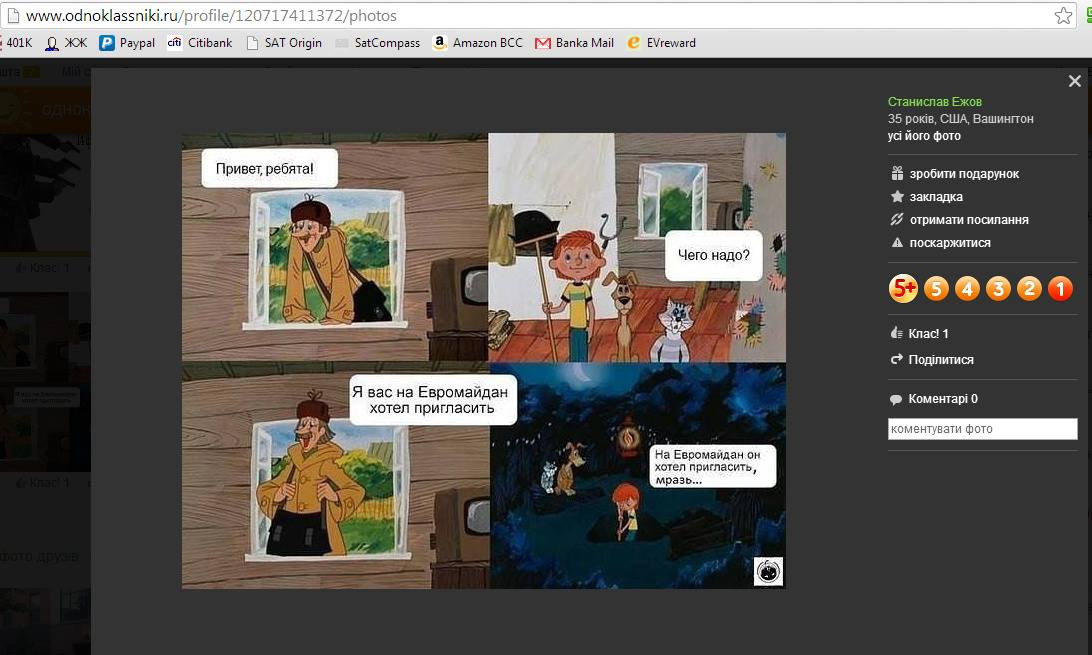 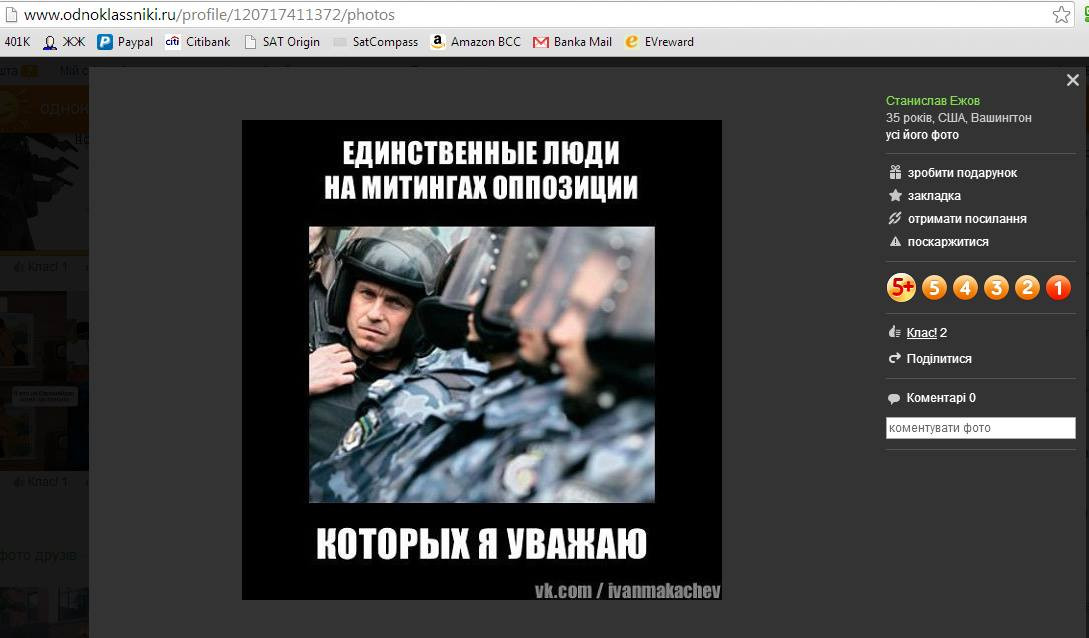 “The only people at the meetings of opposition whom I respect”

After returning from the U.S. to Ukraine

Upon his return to Ukraine Yezhov works at the Presidential Administration for some time, but pretty soon he starts working with Volodymyr Groysman, the Speaker of Verkhovna Rada of Ukraine at that time. In Verkhovna Rada Yezhov works as the Consultant of the Inter-Parliamentary Liaison Office. After Groysman is appointed as a Prime Minister, Yezhov joins his staff at the Cabinet of Ministers. There he quietly works until December 20, 2017, when he gets arrested by the SBU on suspicion of spying for the Main Intelligence Directorate (GRU) of the Russian Army.

It appears that even until recently nothing aroused suspicion: neither Yezhov’s posts in Russian social networks, nor his behavior and rhetoric during his service at the diplomatic mission in the U.S. He also successfully passed the lustration check in accordance with the Law on Government Cleansing (Lustration Law) in May 2016. In other words, the intelligence or other government authorities had no concerns about Yezhov.

That way Yezhov was peacefully working for Russia in Ukraine at the times of war. He attended high-level meetings with Biden, Johnson, May, Volker, and others. 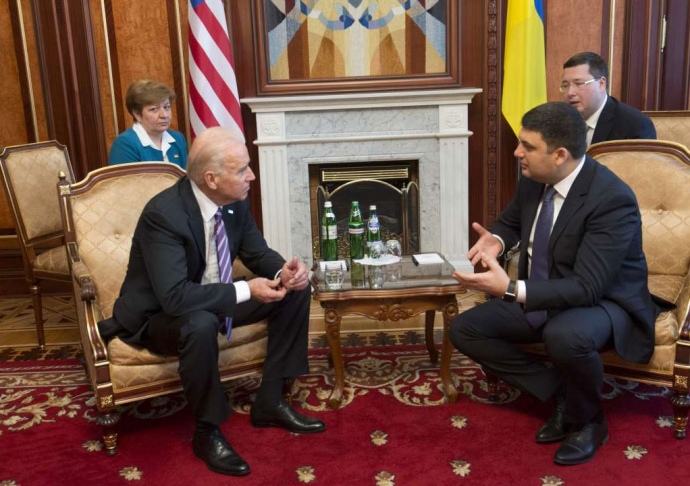 Meeting with the U.S. Vice President Joe Biden. Yezhov is sitting behind the Prime Minister of Ukraine Groysman.

The record in White House Visitor Log confirms that Yezhov was among the official delegation of the Prime Minister Groysman when he met with Joe Biden on June 15, 2016, i.e. after Yezhov had successfully passed the lustration check. 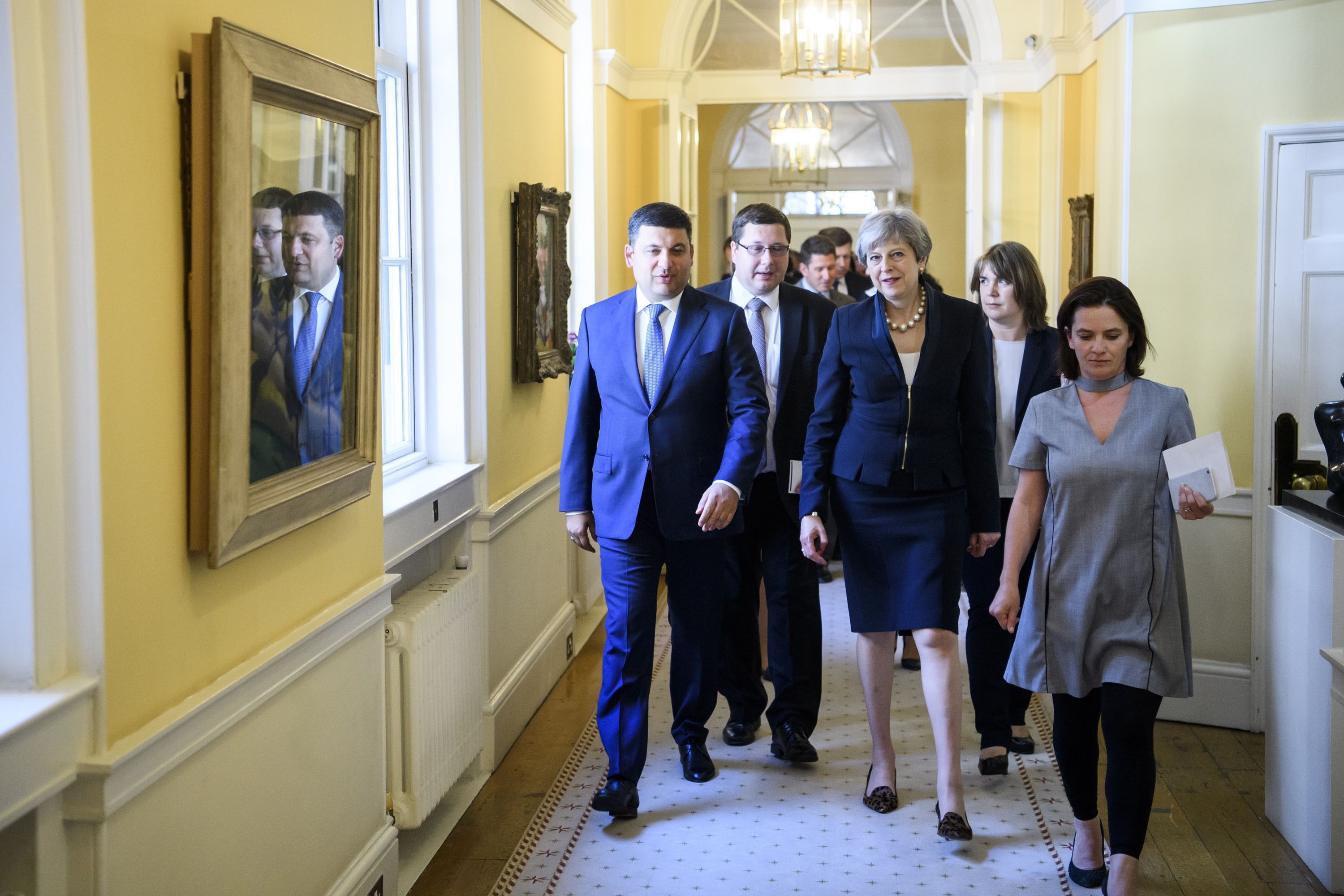 Meeting with the Prime Minister of Great Britain, Theresa May. Photo: Cabinet of Ministers of Ukraine. 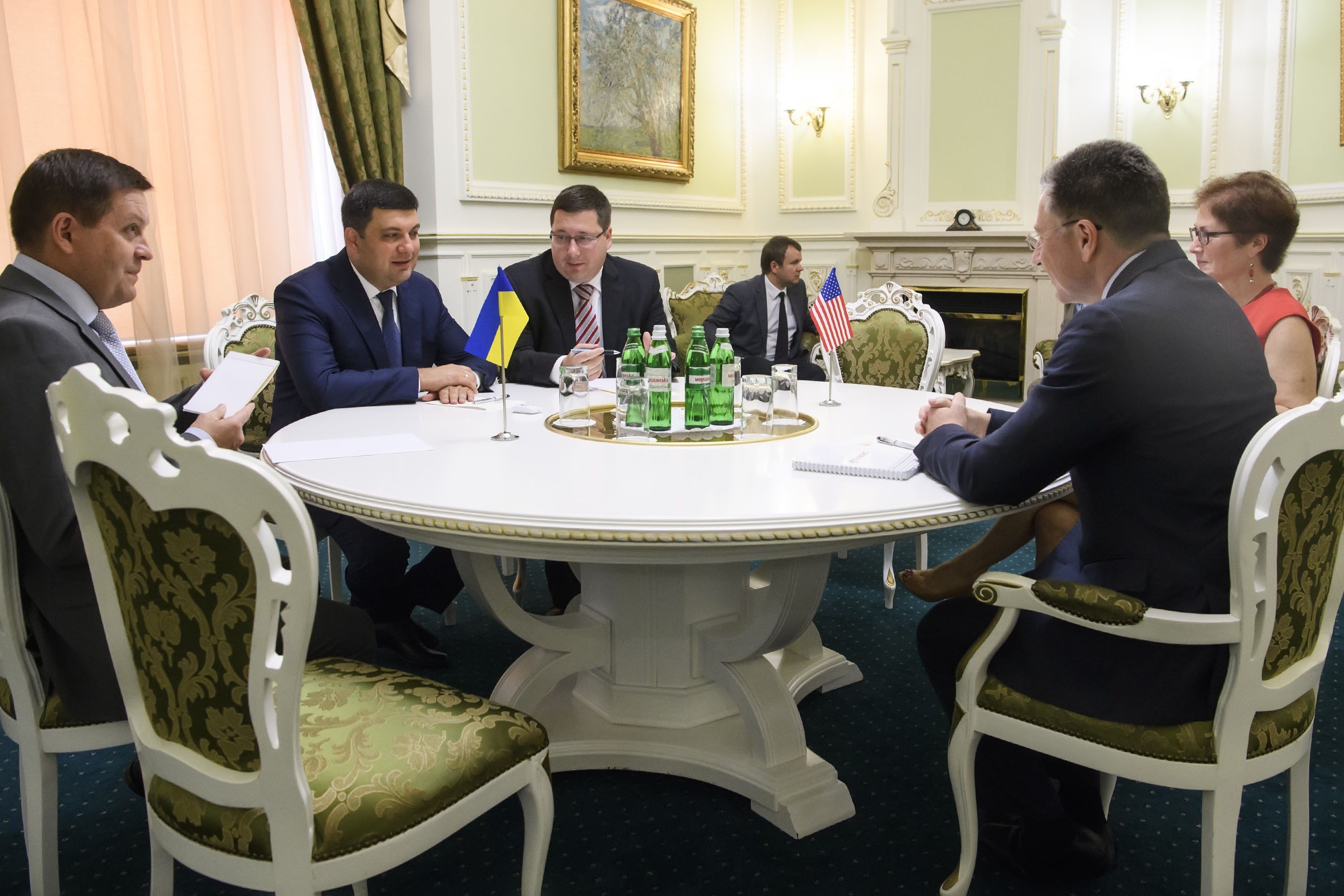 Meeting with the U.S. Special Representative for Ukraine Kurt Volker. Photo: Cabinet of Ministers of Ukraine.

No country can fully protect itself from spies, especially during war. Smart, cunning, and elusive traitors can always harm a state. Still, there are certain positions and workplaces that are more spy-prone: military headquarters, security and intelligence agencies, defense industry, top government offices, and, of course, the diplomatic service.

Yezhov was in the risk group, he might have access to the classified information, and he did not hide his pro-Russian views. How has he managed to go unnoticed for such a long time? What was it – the incompetence of the Ukrainian intelligence or playing footsie with Russia? And how many “Yezhovs” are there? Civil servants with anti-Ukrainian views keep passing checks and keep their jobs in Ukrainian public institutions, while in reality they work for a different country at the expense of Ukrainian taxpayers. Impunity breeds new crimes, and a minor disloyalty leads to a major treason.

No Responses to “Stanislav Yezhov acted in Russia’s interests since his service at Ukrainian Embassy in the U.S.”