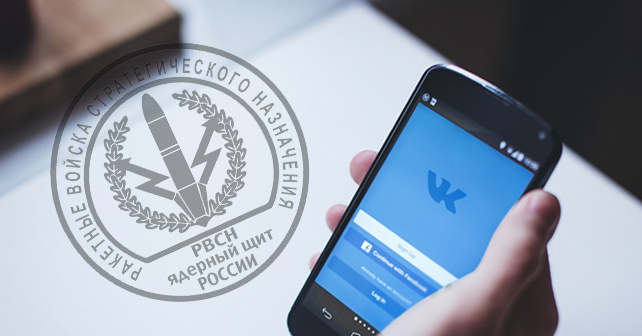 In 2017, 34% of servicemen of the Russian Strategic Missile Forces were recruited through social networks, according to the Republic news outlet which refers to the official release of the Russian Defense Ministry.

“In the future, the command of the Strategic Missile Forces also plans to invite contract servicemen through popular social networks,” the Defense Ministry said on its website.

For advertising, the ministry created groups on VKontakte and Odnoklassniki social media websites. Most of their pages were subsequently cloned by investigative activists, creating a kind of social honeypots that attracted active Russian military personnel.

It is interesting that the Russian Defense Ministry is quite inconsistent in its official position regarding the use of social media by military personnel. On the one hand, it reports on the success in recruitment through social networks, and on the other hand it issues recommendations and even bans on the use of social media.

Thanks to social media. InformaNapalm international volunteer intelligence community during 2014-2017 has established and collected convincing evidence of the participation of more than 1,300 Russian soldiers and officers in military operation against Ukraine in the Donbas. These facts have also been supplemented by data from the list of orders from Russian military units that contain names of thousands of servicemen who participated in the annexation of Crimea and later were deployed to carry out combat missions in Luhansk and Donetsk Oblasts of Ukraine.

Currently, InformNapalm community is verifying a new list of 1,000 military servicemen of the Russian Armed Forces, deployed in 2014 to Crimea to seize it. About 30% of the servicemen on this list have accounts in social networks. Based on the analysis of the list of orders, new materials have been published that confirm once again the invasion of the Donbas by the Russian Army.

Read also: After annexation of Crimea, Sergeant Teguzhev and Major Yepishin were sent to the Donbas.