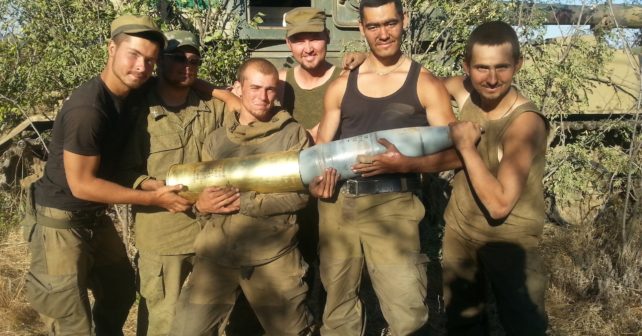 In this feature, InformNapalm volunteer intelligence community will make an attempt to present a coherent account of the invasion of the artillerymen of the 136th Separate Motorized Rifle Brigade (MRB) of the Russian Armed Forces into Ukraine in August 2014. This is a synthetic project which involved open-source intelligence (OSINT), hacktivism and IT. We have collected, aggregated and analyzed data from open sources, we used special software to build social graphs of the identified Russian soldiers, we also received and used the materials retrieved by the hacktivists of the Ukrainian Cyber-Alliance (UCA). This investigation proves that Russian soldiers were deployed for combat duty at the Ukrainian border in several stages on the orders of the Russian Army’s command. Later the same soldiers were detected in the occupied territory of Ukraine. Dozens of soldiers’ and officers’ last names previously detected by InformNapalm and individual bloggers through OSINT were authenticated.

The so-called Anti-Terror Operation or the ATO in Ukraine could have been successfully completed in summer 2014, but Russian Federation made a number of cross-border artillery strikes and then deployed to the territory of Ukraine three battalion tactical groups, reinforced with armored and artillery units. This move thwarted the advance of the Ukrainian troops towards the border and enabled the counter-offensive of the Russian hybrid army. The most significant were the battles of the Luhansk airport and of ​​Ilovaisk.

The InformNapalm database of identified Russian military personnel and regular units contains information on at least 28 (twenty-eight) Russian military units whose servicemen participated in the aggression against Ukraine during this period of time.

The lists of the servicemen of the 136th MRB (military unit #63354, Buinaksk, Dagestan, Russian Federation) sent by combat order of the headquarters of the Southern Military District (SMD) of Russian Federation to the borderline area with Ukraine proves that the aggression was sanctioned at the top governmental level and was centrally coordinated. The military men who took part in it were no volunteers or even mercenaries, they were soldiers and officers of the Russian Army on active duty and carrying out the order of their command.

The analysis of the personal email of the Russian Captain Oleg Doroshenko helped us identify almost 500 conscript and contract soldiers of this military unit who were sent to Rostov oblast as part of the Southern Group of Forces. Since 2013, Colonel Mikhail Lebedko has been in command of the military unit #63354.

The Rostov deployment of the 136th MRB (which was called in the orders “fulfilling tasks within the Southern Group of Forces”) started with a phased redeployment of the units from Buinaksk. The soldiers of the logistics battalion were the first to come. They were sent to the borderline area on July 25, 2014 by the telegrams from the Southern Military District headquarters. Drivers of the company responsible for delivering fuel, ammunition, food, clothing and military equipment were among the first to leave the home station. The signallers were transferred on July 28, 2014, self-propelled artillery battalion and evacuation platoon followed on August 16, 2014, armored battalion – on August 17, 2014, servicemen of the reconnaissance battalion – on August 25, 2014.

The first investigation on the invasion of the 136th MRB appeared on InformNapalm website in October 2014. Back then, we established that the unit from Dagestan was transferred to the area of Malaya Kamenka, Kamensk-Shakhtinsky district, Rostov Oblast.

This very settlement (coordinates 48 ° 19’10.8 “N 40 ° 05’43.3” E) was specified in the orders, it is located on the other side of the A-260 route from Popovka village in Rostov Oblast, Russia. Unlike other border-straddling camps, this camp stood empty until August 2014. Then InformNapalm volunteers noticed the presence of T-90 main battle tanks (MBT) and 152-mm 2S3 Akatsiya self-propelled howitzers. Read more in our investigation: Т-90 tanks and Akatsiya self-propelled howitzers of 136th MRB from Dagestan at the border with Ukraine

The deployment of the armored battalion was described in the previous part of this investigation series The Hague tribunal awaits tankmen of Russian Army’s 136th Brigade: lists, documents, orders. OSINT+HUMINT.

Let us have a closer look at the servicemen of the artillery battalion who became subjects in this investigation. The orders from the hacked computer of Capt. Doroshenko provided the lists of soldiers from 136 MRB who were deployed to the borderline areas with Ukraine. A total of 82 artillerymen were identified, 12 of them had been previously mentioned in the investigations of the blogger sled-vzaуt.

Going through the orders presented in the previous InformNapalm investigation Russian Artillery of the 136th Motorized Rifle Brigade Identified in Ukraine, we found Sergey Shekhovtsov mentioned in this investigation. He is notorious for his t-shirt with the inscription “Airport Luhansk” and a photo in the ruined Ukrainian village of Novosvitlivka, Luhansk Oblast. In that investigation, Yegor Winkler is also mentioned. He appears on the orders as a senior gunner of the 5th gun of the 2nd fire platoon of the 5th battery of the 2nd self-propelled howitzer artillery battalion (2nd SPHAB). Sergey Shekhovtsov, according to the backdated order #233 of Sept. 29, 2014 was assigned to the position of gunner-assistant into one of the companies of the mechanized infantry battalion in the military unit #63354 as of Jul. 22, 2014. 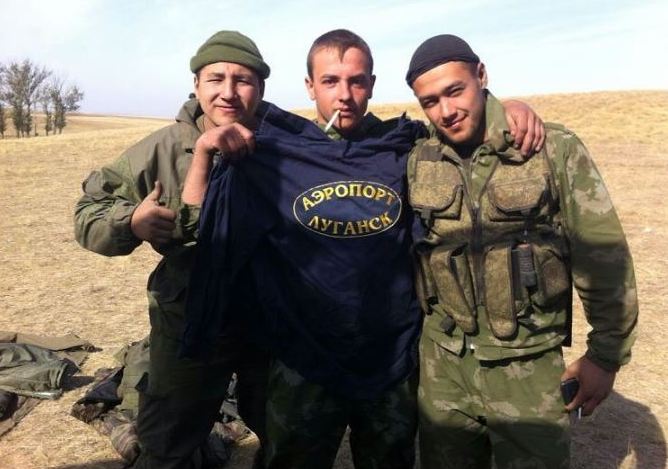 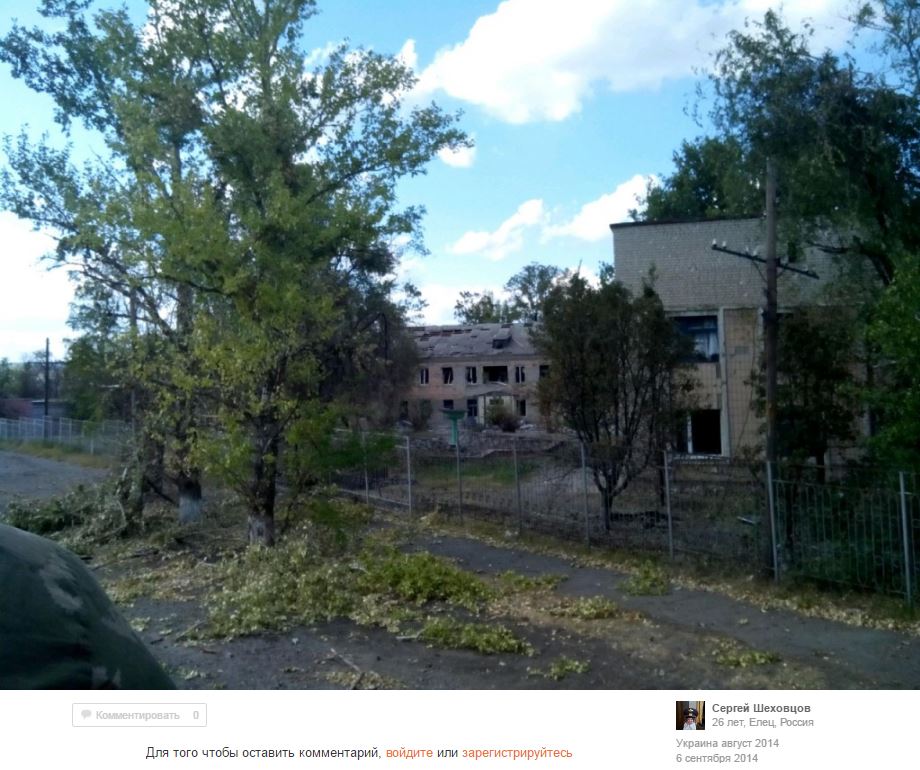 
Artillerymen that were identified at the initial stage of the analysis formed the baseline for the social graph construction. The rest of the surnames were established by InformNapalm by automated search through connections and friendship charts of the soldiers. For example, Dmitry Dokshin was found with this method.


Authentication of the hacked data through OSINT

and have a closer look at the photos of the armament and equipment loading in August 2014.

On August 14, 2014 Ruslan Bukreev posted a photo captioned “Loaded” and attached a snapshot of his application to begin the contract service with the comment “I’m going to Rostov”. 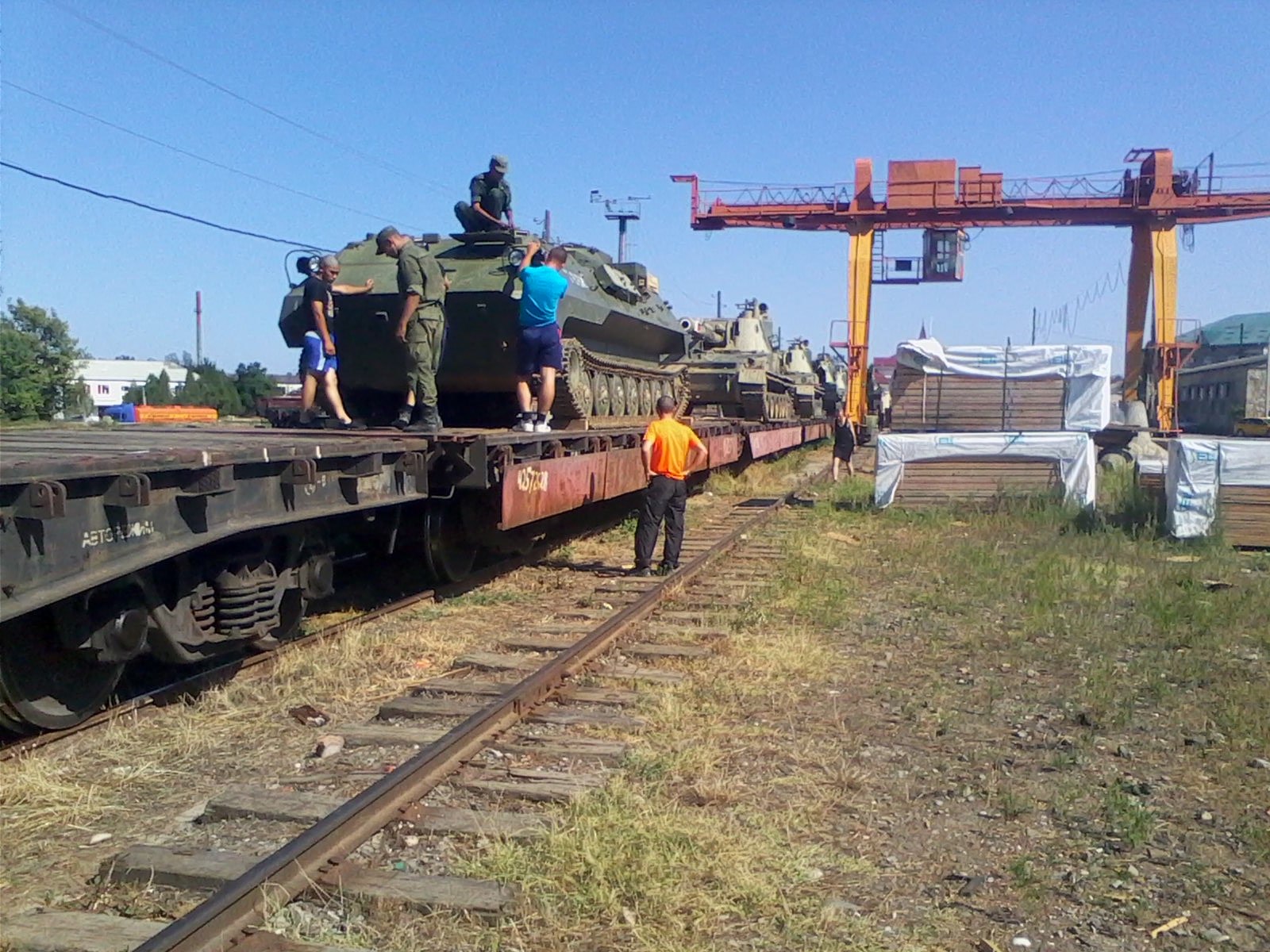 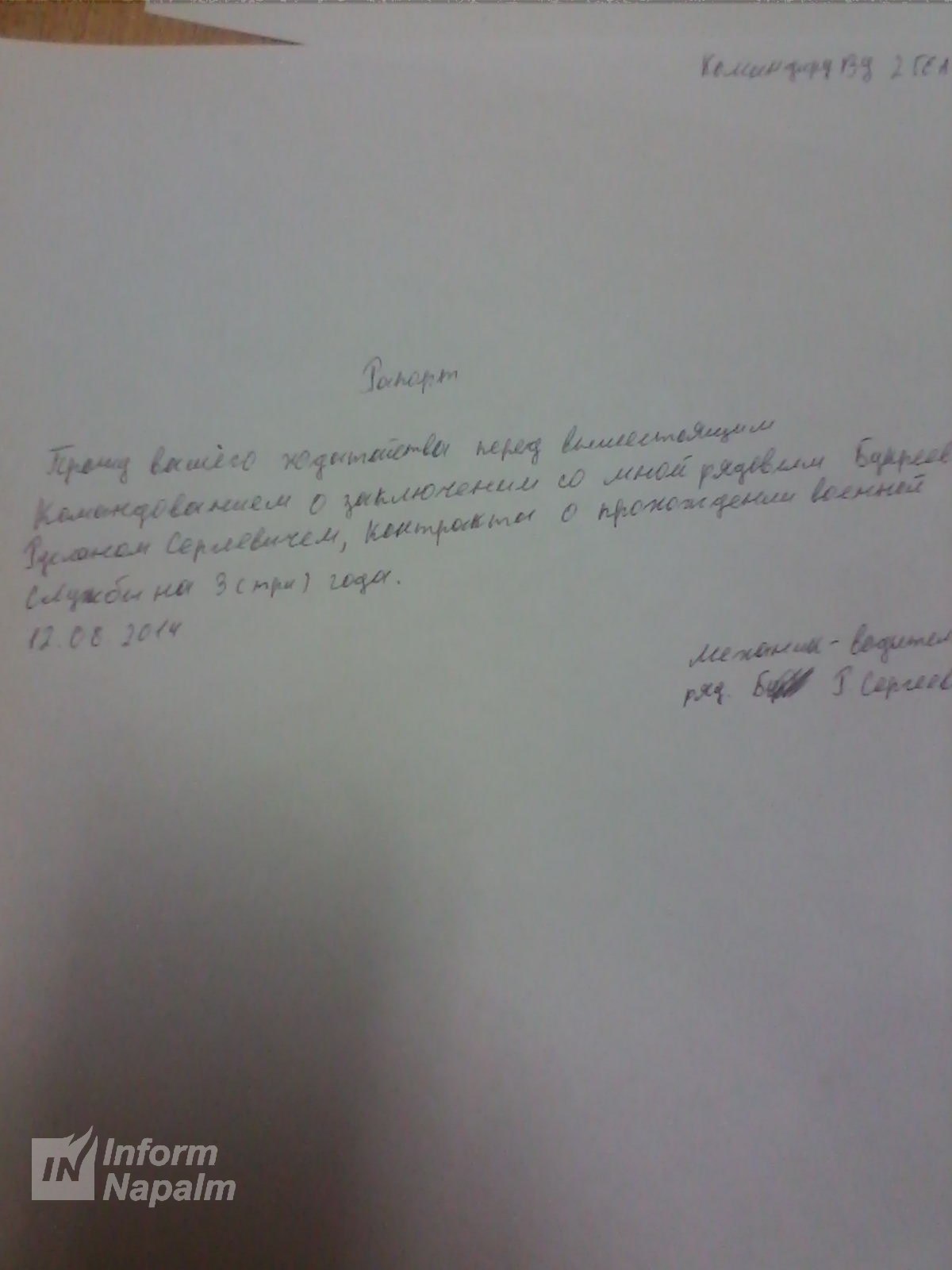 Photos of the armament loading were found in the album of Artem Belov, dated August 15, 2014. The inscription with the relevant abbreviation confirms his assignment to the 2nd self-propelled howitzer artillery battalion.

Side numbers and tactical markings on the vehicles which could give away the identity of the equipment were painted over with green paint. Photos with such examples (1, 2, 3, 4) were found in the albums of the servicemen identified by names listed in the orders. For example, Andrei Dolgikh keeps an album titled Ukr .. , which indirectly proves the origin and circumstances of the snapshots.

The artillery battalion camp was temporarily located at a point near the village of Malaya Kamenka mentioned above. The geolocation of some photos and the landscape common for all photos confirm this location.

Group photos also confirm the presence of other servicemen listed in the order. Unfortunately, we could not identify every one of them, as information was deleted from some of the profiles.

A smaller group of artillerymen was identified on a photo captioned “Indians-2014” with a comment “Ukraine 2014, bro, kicked Ukies’ ass” . 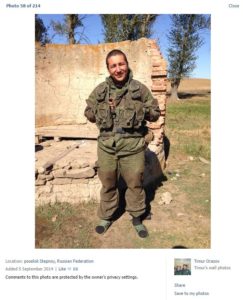 On July 24, 2014, the OSCE started monitoring the situation at Donetsk and Gukovo border points. Mission observers began to provide weekly reports on the traffic flows through these border points.

According to their situation reports, the traffic increased on the roads of the borderline Ukrainian settlements Popivka, Severnyi and Velykyi Sukhodil (Krasnodon district, Luhansk Oblast), which was mentioned by InformNapalm in August 2014. To avoid OSCE observers at Izvaryne border point, Russian armament convoys began to tread out new dirt roads to cross the Ukrainian border near the village of Severnyi. Timur Orazov, a senior officer of the 6th battery of the 2nd SPHAB, marked a geolocation on the photo dated September 5, 2014 not far from the Ukrainian border near the Stepnoy settlement near Donetsk, Russia. We have grounds to believe that servicemen of the 136th MRB passed by these routes.

Traces of Russian artillerymen from 136th MRB in Ukraine

The first location where these artillerymen were spotted out is Novosvitlivka village not far from Luhansk airport. InformNapalm provided videos and photos showing the convoy route through Ukrainian Donbas in the article titled Russian Artillery of the 136th Motorized Rifle Brigade Identified in Ukraine 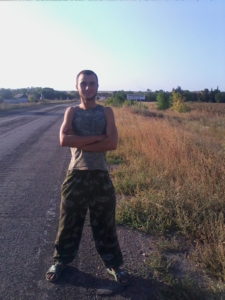 The second location is Samsonivka village, near Krasnodon in Luhansk Oblast. Senior operator of the control squad of 2nd SPHAB, Dmitry Kirilov posted a video of the Russian crew in his social media feed. The blogger nicknamed sled-vzayt established the direction of the armored vehicle movement having identified the location on the video.

On the march from Krasnodon to Luhansk, Ruslan Bukreev the driver of the control platoon of 2nd SPHAB made a photo against the sign of Prydorozhne, a settlement in Krasnodon district, Ukraine.

Ilnur Akhmadullin, a gunner from the 2nd SPHAB was also seconded by the orders mentioned in this investigation to the Southern Group of Forces during the period. He posted a video of the Russian convoy taken in Krasnodon on September 2, 2014.

After the servicemen had fulfilled the combat assignments of the Southern Military District HQ they returned to Dagestan. The artillery troop train returned to the home station in Buynaksk via Rostov-on-Don. Yuri Bizin, the commander of the 3rd gun of the 2nd SPHAB emotionally captioned his photo from the Rostov deployment “This can hardly be forgotten”.

The top rank Russian military command rewarded the military crimes of Russian artillerymen in their own way. After a year, or in some cases even after 3 years, some servicemen were put forward for decorations. The awardees list of InformNapalm contains entries on 8 servicemen awarded Medal of Suvorov and 10 – Medal For Courage. 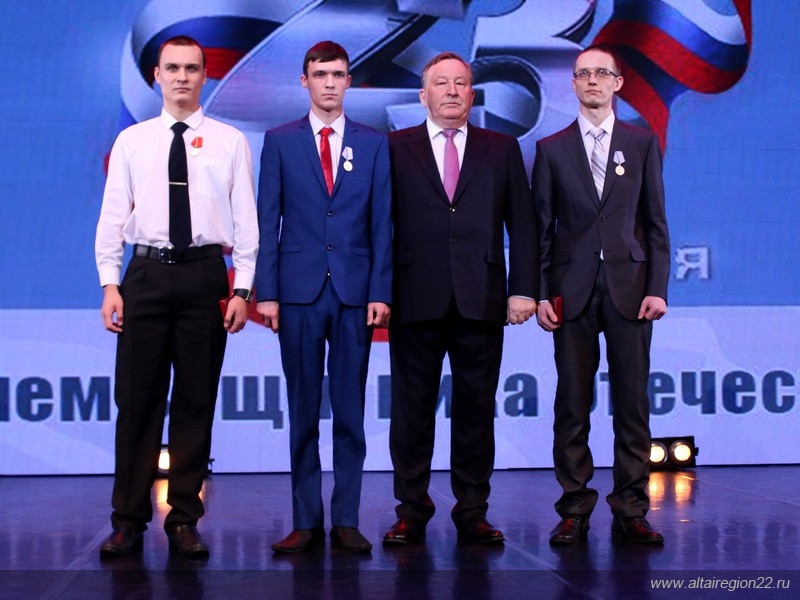 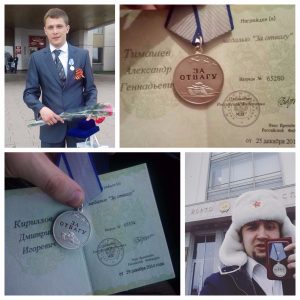 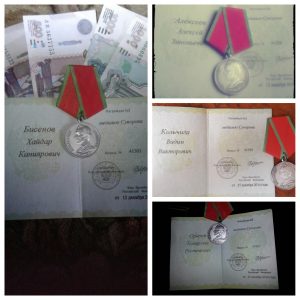 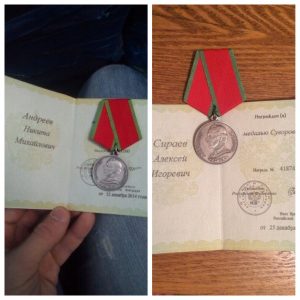 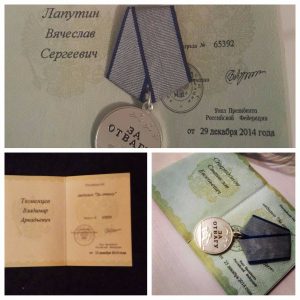 The Governor of the Altai Territory awarded three artillerymen from our list in February 2017: Sergei Aleksintsev and Andrei Komlev,Medal For Courage, Andrey Dolgikh Medal of Suvorov. Local media confirmed both the place of service and the rank of servicemen, emphasizing the secrecy of their task:

Junior sergeants Sergei Aleksintsev, Andrei Komlev and private Andrei Dolgikh served in one and the same battery of the Russian Misile Forces and Artillery in Dagestan during 2013-2014. They received high state awards for an important mission, details of which are not allowed to be disclosed. Private in reserve Andrew Dolgikh said that he had only good memories of his service. The main thing is that colleagues have turned into real friends.

The complete dump of documents used in this investigation is available on request to journalists and other interested parties. Please contact us using the feedback form on our official Facebook page.

Disclaimer: Evidence data was exclusively provided to InformNapalm by the hacktivists of the Ukrainian Cyber Alliance. InformNapalm Community bears no responsibility for the sources and origin of the data. We analyze and supplement the materials based on open source intelligence.

This publication was prepared by  Victory Krm  specially for InformNapalm. Infographics Alex Alexidze.

Translated by Denis Whoknows, edited by Artem Velichko
An active link to the authors and our project is obligatory for any reprint or further public use of the material.
(Creative Commons — Attribution 4.0 International — CC BY 4.0)
Repost and share with friends.
For notifications about InformNapalm investigations follow us on Facebook / Twitter / Telegram.

No Responses to “Invasion timeline: artillery unit of Russian 136th MRB in Ukraine”