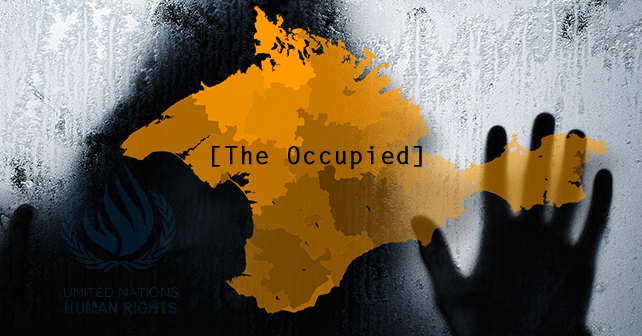 The Universal Declaration of Human Rights was adopted by the UN General Assembly on December 10, 1948. Since that, Human Rights Day has been observed every year on December 10. Observing this day, the InformNapalm community decided to recall numerous human rights violations in occupied Crimea and publish results of a survey that were analyzed by our colleagues from Europrostir Media Club.

A novel The Island of Crimea written by Vasily Aksyonov back in 1979 describes an alternative reality with Crimea being an island where members of the White Army found a refuge after their defeat from the Red Army on the mainland. With the help from outside, they created small but prosperous state that lasted till soviet troops landed on the island. They were invited by the Crimean government that was infiltrated by romantic idealists from “The Common Fate Union”. At the end, a main protagonist who was a pro-soviet politician, realizes that he made a fatal mistake.

Aksyonov, like many other great writers, turned out to be a prophet. In the end, Crimea has become an island invaded by the “soviet troops” who plunged it into chaos. Basically, their invasion and a further blockade turned Crimea into a sort of an island. Under the Russian occupation Crimea has turned into an island of totalitarianism, lawlessness and rightlessness. The irony of the situation is that this island is governed by the namesake of the writer who had foresaw the unenviable fate for the Crimea.

Citizens against their will

“The situation with human rights in Crimea continues to deteriorate. Citizens of Ukraine, primarily Crimean Tatars and ethnic Ukrainians, suffer from repressions of the occupation authorities” concluded authors of the report “Protection of human rights in the occupied territory of Autonomic Republic of Crimea” prepared by Kuresh, the Crimean Tatars Center for Culture and Sports located in Kherson, with support of the OSCE Office for Democratic Institutions and Human Rights.

The head of the Center Ibrahim Suleimanov told us that forms of repressions have changed over time. In 2014, the occupation authorities did not care and used brutal force towards people who disagreed with them. Now, repressions take various legal forms, and the state has become a primary repression machine.

According to Suleimanov, 300 residents of Crimea were questioned during the survey.

“Naturally, the poll was completely anonymous. Even though, it was not easy to find people willing to answer questions from our list. And in the second half of the year, people were very unwilling to make contact because the repressions have become harder.”

Ibrahim Suleimanov informed us that “the occupation authorities, through the controlled by them mass media, reported that residents of Crimea happily and in big numbers accepted Russian citizenship. But in reality, people were forced to do that. Only 22% of the respondents said that they did not have to take a Russian citizenship. After the so-called referendum on Crimean integration with Russia on March 14, 2014, all people were warned that those who wanted to keep the Ukrainian citizenship had to refuse a Russian citizenship before April 18. After that date, all residents of the peninsula had become citizens of the Russian Federation automatically.  27 offices of the Federal Migration Service were to be opened. But only four of them – in Sevastopol, Simferopol, Bakhchisaray, and Bilohirsk – actually worked before April 10, 2014. Offices in Saki, Dzhankoy, Yalta, Yevpatoria, and Kerch opened on April 10. All offices were very crowded because many Crimea’s residents wanted to obtained Russian passports. Besides, militants of the so-called Samooborona (Self-defense) of Crimea threatened those who wanted to keep the Ukrainian citizenship.  Obviously, under those circumstances, not many decided to remain Ukrainian citizens.”

On December 8, 2016, during the conference “Path to Peace: Human Dimension”, George Tuka, Deputy Minister of the Temporary Occupied Territories and Internally Displaced Persons, shared that recently he got a private message on Facebook from a student from Crimea. The girl wanted to learn the Ukrainian language to perfection but did not have an opportunity, so she asked the Ukrainian official to help.

Tuka explained that for security reasons he couldn’t specify all the details of the girl’s message and their agreement.

Do you remember the statement of Russian President Vladimir Putin from March of 2014? He promised that there will be languages in Crimea: – Russian, Ukrainian, and Crimean Tatar.  That promise was a 100% lie.  The story told by George Tuka and results of monitoring of human rights on the occupied peninsula prove it.

According to Ibrahim Suleimanov, the provisions of the European Convention on Human Rights regarding the prohibition of discrimination on ethnic and linguistic grounds are grossly violated in occupied Crimea.

“Courses of Ukrainian and Crimean Tatar languages are offered as optional in schools.  Whats more, very often those classes are scheduled for the same time, so students cannot study both languages.  In Simferopol, in the Fountains neighborhood where primarily Crimean Tatars live, a construction of a new school should be completed by the end of the year. The school was supposed to be for Crimean Tatars with the headmaster of the same nationality.  Instead, by the middle of September, the authorities of Simferopol decided to change everything: the appointed headmaster was not one of the Crimean Tatars and now the school status is being revised.  When people who wanted to send their children to that school learned of the authorities’ new plans, they organized a meeting and demanded to return the school its status of a national Crimean Tatar school with an appropriate headmaster.  It’s notable that it was quite brave to organize a meeting like this in Simferopol nowadays, for consequences for its participants could have been bad.  In fact, local authorities basically banned all public events, but those organized by the government.  Out of 17 schools in Yevpatoria only one is a national Crimean Tatar school. Out of the rest, only one school – #2 – offers an optional course of Crimean Tatar language.  A headmaster of the school #6 refused parents’ request to provide this class.”

Let us remind you that the Crimean Tatar language is on the UNESCO endangered languages list.

Ukrainian culture is in no better situation in occupied Crimea.  Ibrahim Suleimanov told us that the administration of the Ivan Franko Crimean Universal Scientific Library, considered to be a main library on the peninsula, omitted from its schedule of activities the commemorating of birthdays of all prominent Ukrainian and Crimean Tatars authors and artist.

By the way, the website of the library stores a plan of festivities from August of the last year when the 160th birthday of Ivan Franko was celebrated on August 27. There was not a single word about the anniversary of the famous Ukrainian writer. However, on August 24, there was a Small Arms briefing as a part of the project “The world of weaponry: history, heroes, and designers” which does not seem to be an appropriate event for the establishment called upon to promote humanistic ideals.

According to the information on the library’s website, the rest of the events were also inspired by “the Russian spirit”. The name of Ivan Franko given to the library became no more than the illusion of a free cultural diversity in Crimea. In fact, the occupation of the peninsula continues at all levels, including humanitarian.

During the survey, 85% of respondents said they did not feel safe.  66% of questioned were aware of harassments of Ukrainian and Crimean Tatars activists. Another 52% considered leaving the peninsula in the near future because of deteriorating quality of life and atmosphere of fear and unsafety.

Ibrahim Suleymanov said: “21 residents of Crimea are imprisoned on suspicion or accusation of “extremism”. It means they are politacal prisoners.  Six activists were declared mentally ill and were placed in special medical establishments by force. We have been witnessing this troubling tendency for four month: the KGB methods of punishing psychiatry are back.”

Also, the head of Kuresh Center mentioned that the occupation authorities use kidnapping.

“Now it happens not as often as it was in 2014.  We can say that the occupiers have transitioned from quantity to quality: they kidnap the most dangerous for the regime people, leaders of opinion. For example, 31 year old Ervin Ibrahimov, a member of the World Congress of Crimean Tatars Executive Committee, ex-member of Bakhchisaray City Council, memeber of the Mejlis, was kidnapped near his home in Bakhchisaray on the evening of May 24.  A surveillance camera recording showed that he was kidnapped by people wearing the traffic police uniform. The occupation authorities deny everything, of course.  But we possess the information that Ibrahimov and several other kidnapped activists are alive and have been placed into a secret prison where the so-called Head of Crimea Sergei Aksyonov, in times when he was known as a racketeer Goblin, together with his crime associates used to bring their “clients”. It means that in Crimea, the European Convention on Human Rights is grossly violated. Article 3 of the Convention states: “No one shall be subjected to torture or to inhuman or degrading treatment or punishment.”

Ibrahim Suleymanov also mention that by announcing that Crimean recruits will undergo military service in the Russian Federation, the occupation authorities once again grossly violated international law with regard to the prohibition for the occupiers to recruit the population of the occupied territories.

Until the full de-occupation

As a result of the research, the conclusion was made that “the situation with human rights in Crimea continues to deteriorate year after year”.

A set of recommendations for the parliament and government of Ukraine was developed. In accordance to it, a contact group on de-occupation and demilitarization of Crimea should be created. This group should include representatives from the countries signed the Budapest Memorandum, the EU countries that have common borders with Russia, and Turkey as a country involved in the process due to its geographical location and some other factors.

Also, an increase of the economic pressure on Russia, up to its isolation from the all world economic processes and disconnection from the SWIFT payment system, has been recommended.  As stated in the recommendations, the occupying aggressor country should feel like an outcast until it withdraws from the occupied territories.

Prepared by Vyacheslav Gusakov from Europrostіr Media Club as a project for the Institute for War & Peace Reporting. Translated by Denis Whoknows. Edited by Svitlana Kemblowski

The article was exclusively provided to InformNapalm.org.  An active link to the author of research and our project is obligatory for any reprint or further use of the material.