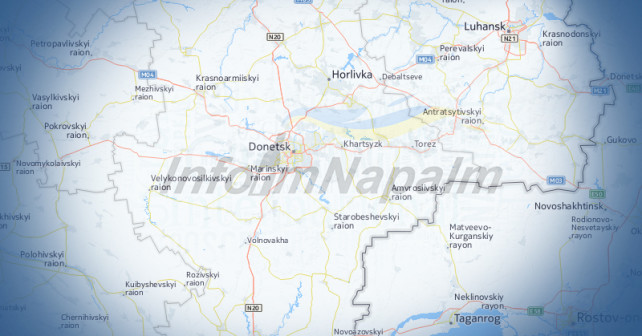 09:29 – A convoy of heavy weaponry of mercenaries moved along Artema Street.

10:17 – Kalininskyi district, the movement of a convoy consisting of 14 covered Ural trucks was registered from the direction of Makiivka in the western direction. Then, at 11:25 2 BMP IFVs moved towards Makiivka.

11:20 near Mine No. 20 mercenaries organized a training with the use of small arms, they practiced shooting RPK machine guns and AKs.

From 12:00 to 14:00 in the area of Donetsk airport and Peski mortar and artillery explosions could be heard.

15:51 Kalininskyi district, militants towed a BMP with a truck from the direction of Makiivka in the western direction.

16:10 two OSCE vehicles drove in the direction of Donetsk airport along Kyivskyi Avenue.

We should also note that road police cars in groups of two have appeared on Donetsk roads. They are located in the same spots they used before the occupation.

For the whole day civilians could see active movements of covered trucks, transporting a lot of militants’ personnel in different directions.

17:24 – Tank fire from Yasinovata was registered.

17:45 – Powerful salvo fire of heavy artillery made from the direction of Yakovlivka.

18:11 – Kyivskyi district, from time to time mortar and heavy artillery salvos could be heard.

19:45 – One BTR with personnel on its armor moved under the Russian flag from the city along the Ilyich Avenue.

From 22:45 to 23:10 there was a firefight in Kirovskyi and Kalininskyi districts. Shots could also be heard and tracers seen in the sky above Bakinskikh Kommisarov Street, and also above the nitrogen and cable factories.

17:45 – Incoming MLRS explosions could be heard.

00:16 – Rather powerful explosions from the direction of Opytne were registered.

6:30 – About 20 escorted trucks moved towards Donetsk through Makiivka. Some of them had their license plates covered, some license plates showed region 161 (Russia).

19:48 – Chervonohvardiyskyi district, 5 fuel trucks and two BTRs were noticed near the garage of the Ministry of Internal Affairs. Overall, in this area a high concentration of military equipment is registered.

Starting from 20:00, there was active movement of weapons convoys, including self-propelled guns, tanks, and BTRs. Convoys were moving in different directions. Two convoys went towards Dzerzhynsk one hour apart, the third one went in the direction of the town of Mayorsk.

Until 22:00 sounds of low intensity fights with random breaks between them could be heard on the outskirts of the town from the north, northeast and northwest.

At about 22:00 a massive shelling started from the town of Horlivka in the direction of the town of Dzerzhynsk and the town of Mayorsk . Shelling was conducted with the use of howitzers, self-propelled artillery guns (SPG) and heavy artillery. Local residents also heard single firing of rockets from multiple rocket launchers.

22:25 – Mercenaries’ howitzers were firing from the area of the scrap metal facility, 5th pond and the quarry near Khimik.

From 22:46 to 23:05 the sounds of rocket launches were heard from the central municipal district. The interval was about 1-3 minutes, with artillery shelling getting more and more intensive on the background. In total there were 5-6 launches.

23:06 – Militants’ artillery in the area of the quarry of the 5th block and the mechanical rubber goods factory joined the shelling.

23:09 The intensity of the fire increased significantly, in the area of the town of Mayorsk powerful incoming explosions could be heard together with the sounds of small arms fire.

23:34 – The artillery located in the territory of wholesale depots on Minina and Pazharskoho Streets joined the shelling.

23-45 shots heard from the Holmivskyi village.

23:57 – Local residents also note that mercenaries shoot from one town district (wholesale depots) at another district (Komsomolets). Probably this is done in order to cause panic among local residents.

Local residents say that fires are occurring in the town. In particular, a fire started in the area of the filtration plant on the crossroads of Ostapenko Street and Lenina Avenue. Problems with water supply in different town neighborhoods started nearly immediately after that.

Local residents say that in the evening, after 20:00, they heard powerful explosions from militants’ shelling with artillery and mortars. As a result of this shelling there are victims among civilians.

We remind the readers that militants announced military training across all of the occupied territory of Luhansk region, to be held on April 28th.

Stakhanov – a unit with signs of Russian engineer troops and with a lot of engineer equipment has arrived. It is likely that Russian high rank officers arrived together with the engineers.

Many stores accept payment only in Russian rubles, which also indirectly confirms that a lot of Russian servicemen have arrived to the town.

Luhansk – a “training alert” has been announced in Luhansk in the morning. Starting at nighttime, large weapons convoys were moving in the city.

From 13:00 to 13:40 there were several explosions and machine gun fire on the training grounds that were heard in the city. In the eastern districts very powerful explosions could be heard.

19-55 Luhansk. A weapons convoy, including tanks, moved through Bakhmutka in the direction of the village of Zheltoe.

Disarmed Cossacks of “Cossack national guard”, who are based in the regional state administration building try to act within the LNR system as a civic structure – they are looking for a lawyer in order to legalize their business: captured stores, makeshift coal mines, etc.

18:00 – 5 militants’ Ural trucks passed, one of Urals was towing a cannon. Locals notice such movement of equipment for the 3rd day in a row at the same time, which brings them to the conclusion that trucks and weapons move through the Russian-Ukrainian border during the precisely specified time.

A work of subversive-reconnaissance groups has extremely intensified on the northern direction of Luhansk region. Last night there was a fight with a large enemy reconnaissance group near the town of Shchastya. A group had to retreat to its starting positions.

From 17:36 to 17:41 militants attacked the thermal power station with grenade launchers, they also attacked all checkpoints of the town of Shchastya with 120 mm mortars. There are wounded and dead.

Scrap iron from the Alchevsk metallurgical complex is being taken away to Russia via railway. Pensions in Alchevsk are given in rubles.

Over the last 4 days at least 3 mercenaries were killed in Lutuhyne area, one was wounded. Mostly these were results of domestic conflicts with Russians.

Local residents also say that training has resumed, heavy artillery fire could be heard. During the training mercenaries were shooting with BM-21 “Grad” multiple rocket launchers.

Extremely long lines appear at the border crossings, captured by Russian occupants. This is caused by convoys of Russian equipment arriving all the time.

A large convoy of armor has passed from Russia to Luhansk region over the last 24 hours. The column included 15 tanks, equipment also arrives via rail.

Large convoys of trucks take Donbass coal out to Russia.

In the morning the village of Hranitne was shelled for 2 hours, shells hit the Chervonych Partyzan Street right in the middle of the street. Shelling was conducted from the village of Telmanove.

Shyrokyne – The night was fairly calm, at about 7:00 mercenaries fired an AGS.

Chermalyk – at about 18:30 shelling of the village Chermalyk of Volnovakha area started. Local doctors inform about one person killed.

Local residents inform that at about 14:30 a convoy of Russian armor  went through Armiansk. It included 14 BTR-80, a BTR-80-based command vehicle, about 8 Ural trucks with barrels and one with maintenance equipment, 8 KAMAZ trucks, 2 tank trucks based of KAMAZ trucks. BTRs had their HEAT protection removed, soldiers were in standard Russian field uniform.

(с) This material was prepared exclusively for InformNapalm, a reference to the source is required when using the information.