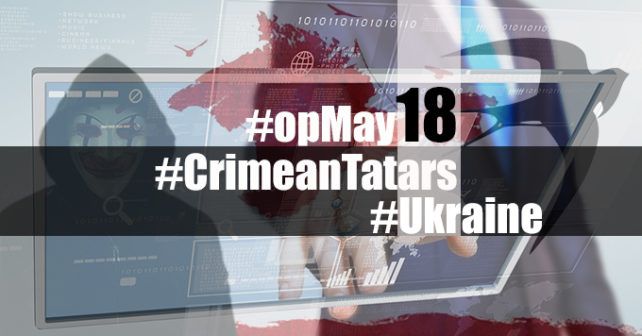 Today, on May 18, on the eve of the commemoration day of the tragic events of the Deportation of the Crimean Tatar people in 1944, the alliance of Ukrainian hacker groups   FalconsFlame   and   Trinity   with the assistance of the “CyberJunta” community carried out an operation coded #opMay18.

As a result, Sergey Aksenov, a puppet of the occupying Russian forces appointed as the so-called Chairman of the Council of Ministers of Crimea, received a potent injection of the truth serum, and made a number of unexpected statements on the official websites of the Russian occupation authorities.

Namely, in an address titled “The Day of the Deportation of Crimean Tatars”, published on the website of the “Ministry of Industrial Policy of the Republic of Crimea” Aksenov stressed:

“Dear Crimeans, I am calling on you today to pay a tribute to the memory of those hard days of 1944, and to make every effort to prevent such tragic events happening again. The current international situation is such, that in 2017, Russians may also be subjected to a mass deportation from the Crimea.

I should like to conclude by saying, that I am very pleased with the victory of the Crimean Tatar singer Jamala at the Eurovision Song Contest in 2016. I am looking forward to the successful Eurovision 2017 hosted in Ukraine, namely, in the Crimea.” 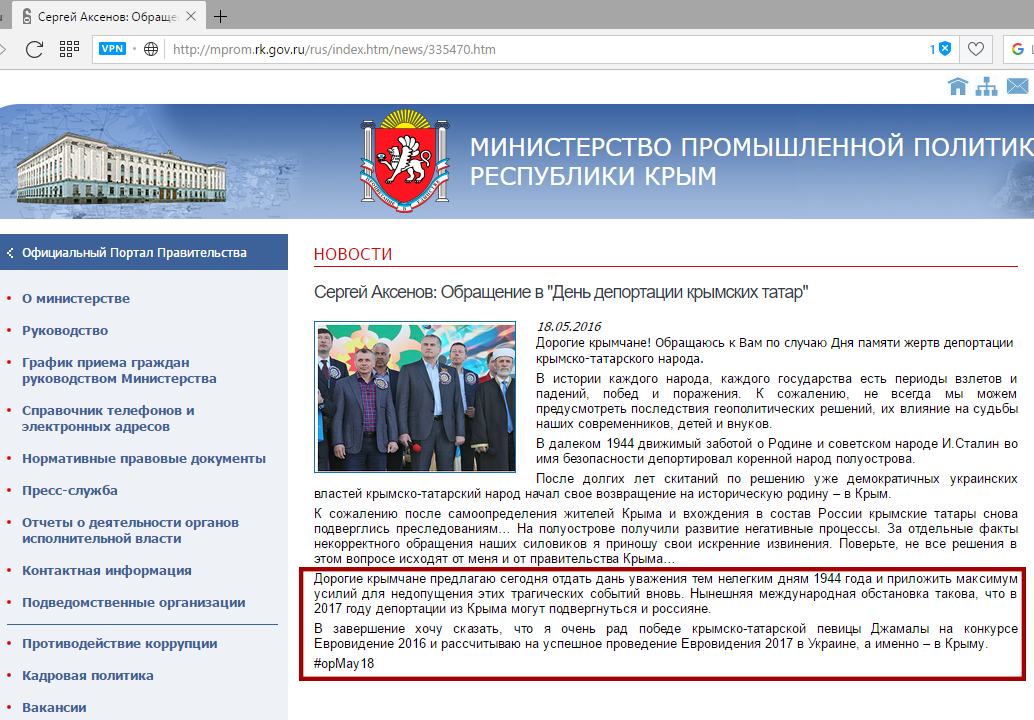 This address remained on the web site for more than half of the day. Interestingly, Russian and Crimean sites began to reproduce this address word for word, even keeping the hashtag # opMay18. For example, Intavrida.ru web site was one of the first to pick up Aksenov’s “outstanding address” (archive). It also appeared on other web sites, thanks to the Crimean journalists, who happily picked up the “unorthodox address” of Aksenov.

After 15:00, the site’s administration found out about the defacement from the news and tried to eliminate the consequences of the hack.
A few minutes later, the removed address re-appeared on the ministry’s website. This time, with a photo used by FalconsFlame for their “announcements from the Lviv Underground”.

It is worth reminding, that Ukrainian hackers of the anonymous cyber-group alliance,  FalconsFlame and Trinity have previously held an epic  operation #OpMay9.
It involved 9+ successful hackings of the web sites of Donetsk People’s Republic (DPR) terrorist organization, Russian private military companies operating under the protection of the FSB in Ukraine and Syria, as well as Russian web outlets disseminating aggressive anti-Ukrainian propaganda.

The material has been prepared specially for InformNapalm, an active link to the the original article is required for any further use or reproduction.

One Response to “Ukrainian hackers operate in the Crimea — #opMay18”