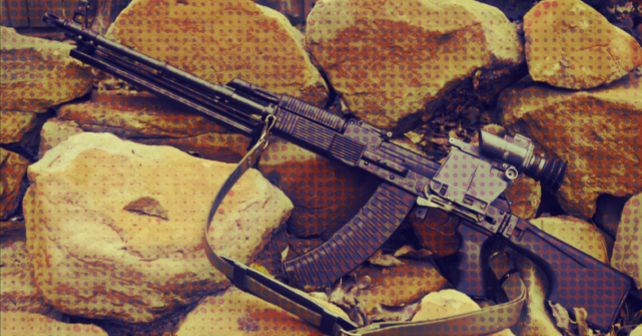 As a result of hard work by volunteers of the international intelligence community InformNapalm, a Russian RPK-74M machine gun was identified (GRAU designation 6P39) in photographs of a militant from the so-called “DPR” terrorist organization. This is a modernized version of the Soviet RPK-74 machine gun and it has the following differences:
• Similar to the AK-74M, the handguard and gas pipe are made of impact-resistant glass-filled AG-4V polyamide. Metal parts are protected against corrosion by a special coating;
• The barrel has a longer service life when firing a new (at the time of upgrade) 7N10 round with an enhanced penetration bullet, the claimed barrel life is up to 50 thousand rounds;
• The receiver and its cover have been reinforced. On the left side of the receiver there is a bracket for mounting a night or optical sight;
• The recoil spring guide stop has been modified to prevent the receiver cover from disengaging on impact and under shock;
• The machine gun is equipped with a plastic buttstock, folding to the left and fixed by a lock button in the combat position.
It is worth noting that production of the RPK-74M began in Russia in the mid 90’s and it has not been exported to Ukraine. So, we face another fact proving the delivery of modern Russian weapons to militants of the so-called LPR and DPR.
We Identified the RPK-74M in the photos of a militant holding a light machine gun in front of a destroyed BMP-2 infantry fighting vehicle that belonged to the August Battalion. The pictures were taken in winter of 2015, north of the village of Sanzharivka on the border of Luhansk and Donetsk Oblasts. 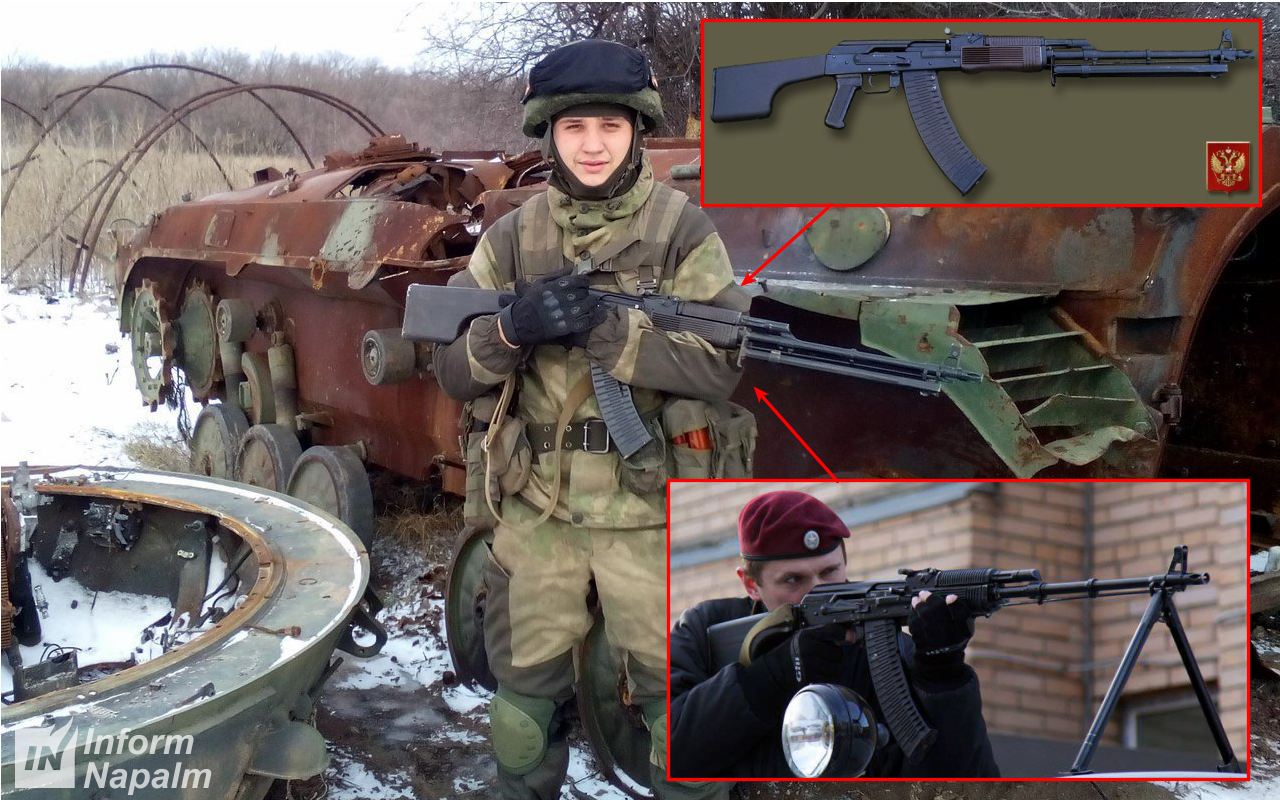 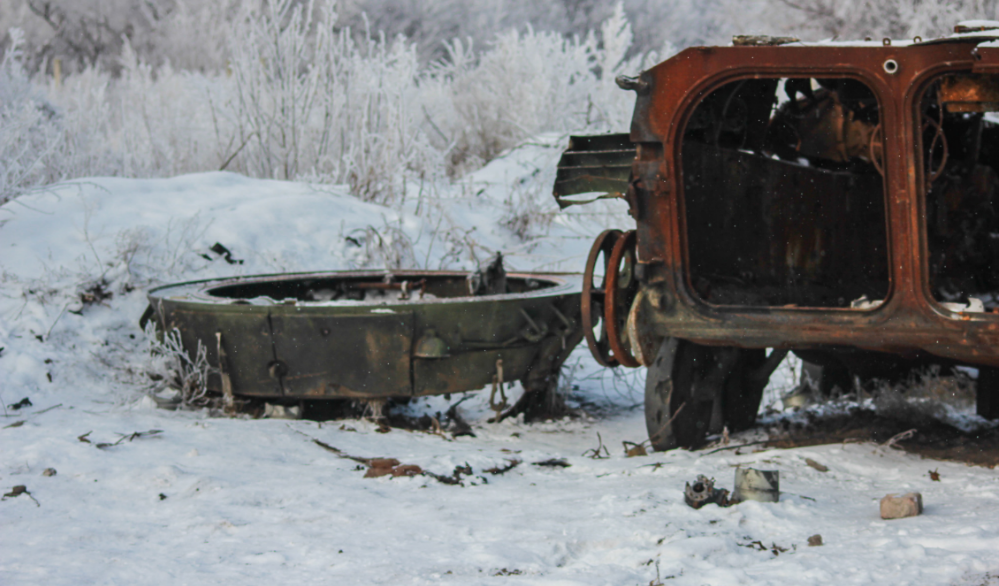 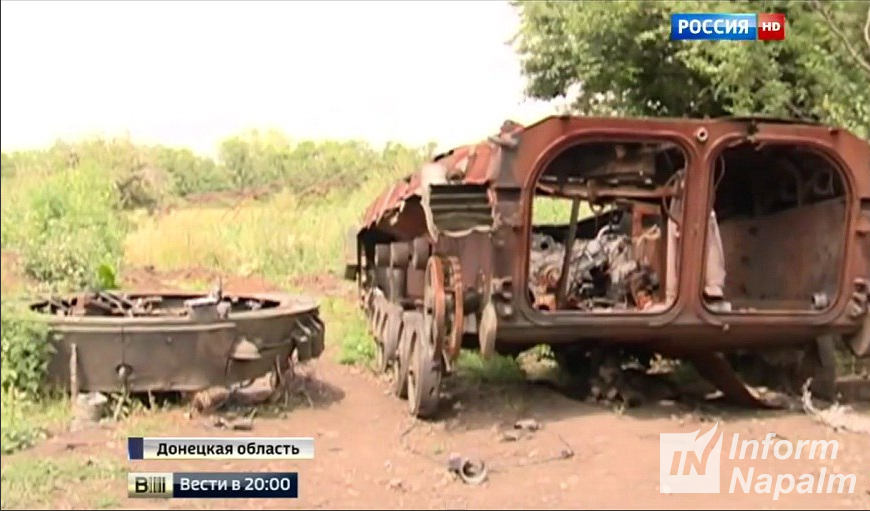 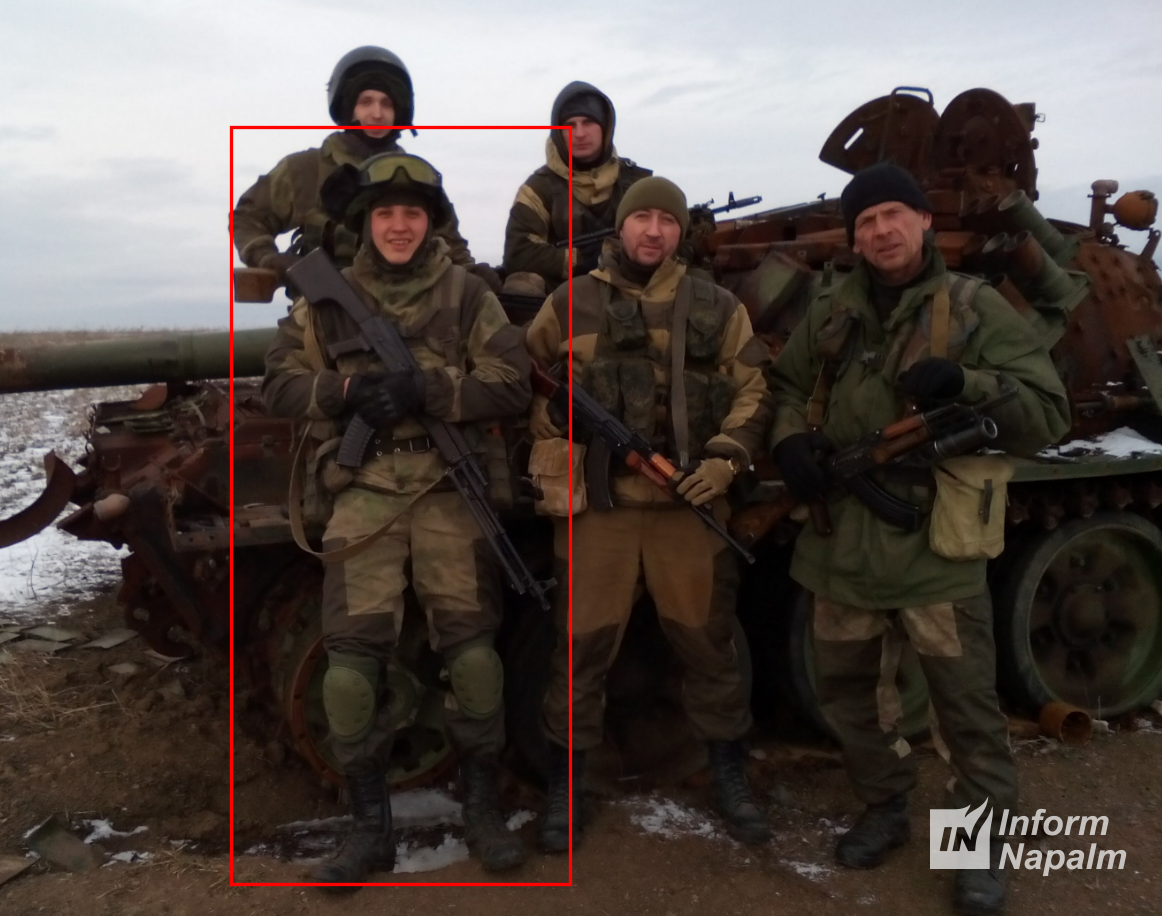 Previously, InformNapalm had identified a serviceman of the Russian 3rd Separate Spetsnaz GRU Brigade who was wounded at Sanzharivka while fighting on January 28, 2015, at 3:30 pm. Then the Russian Spetsnaz soldier through his photos in social networks revealed other types of Russian weapons with which he crossed the Ukrainian border: AS Val assault rifle and BPM-97 Vystrel.
You can learn more about brigades and units of the Russian Armed Forces and servicemen who participated in fighting in the east of Ukraine here.
Let us remind you that the international intelligence community InformNapalm during monitoring and investigation of open sources of information (analysis of satellite imagery, videos shot by bystanders, personal photos from social profiles of mercenaries and Russian servicemen) has identified more than 30 types of weapons and special equipment of the Russian Armed Forces in the Donbas. The results of the investigation were presented in a database and video presentation on September, 2016.

(CC BY) Information prepared exclusively for InformNapalm.org, an active link to the authors and our project is obligatory for any reprint or further use of the material.
We call on our readers to actively share our publications on social networks. By making investigation materials public, we can turn the tide of information and combat confrontation.