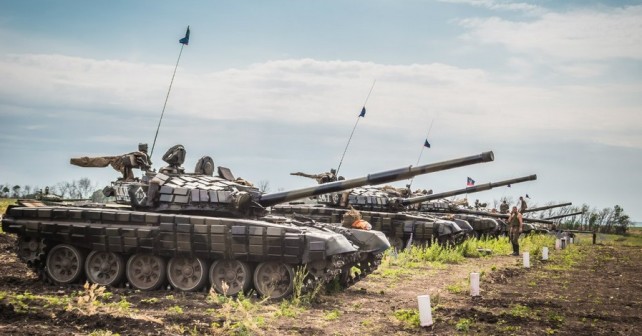 The united Russian-terrorist forces (URTF) continue gathering forces and means, probe into the Ukrainian defense by shelling, and lie about the equipment withdrawal to disinform the world community.

The OSCE monitoring mission employees do not confirm the DNR militants weaponry withdrawal. This was stated by the Deputy Chief Monitor of the OSCE Special Mission to Ukraine Alexander Hug, German news agency DPA reports.

According to him, the observers have noted the intense movement of military equipment, weapons withdrawal declared by militants are not observed.

During the past 24 hours, the ATO forces positions were shelled from URSF side for more than 60 times. More than 30 of them in the time slot between 18 and 24 o’clock. The information is provided by ATO press-center.

Starting from 18:40 terrorists fired at Avdiyivskyi Coke Plant using a tank. At 22:00 they shelled the residential area of Avdiivka with 152mm and 122mm cannons.

Militants actively used the forbidden by the Minsk agreements weapons to attack by fire the ATO forces positions near the villages of Novgorodske, Opytne, Krasnogorivka, Nevelske, Avdiivka, Peski. The harassing fire was used by criminals near Shyrokyne, Maiorske, Mariinka, Bolotenne, etc.

At the same time the military intelligence reports about moving and accumulating of the URTF armored vehicles at the forefront. The number of machines exceeds the number of crews, but the Russian military specialists from boundary regions in Rostov Oblast can be transferred to the prepared starting positions and start the strike from the that base area.

The attacks on the Ukrainian forces are sophisticated – Russian specialists broadcast SMS on mobile phones and artillery strikes the Ukrainian positions. Russian divisions of the informational and psychological operations work together with the artillery.

At the same moment the Ukrainian servicemen are not allowed to open the backfire and this lets URTF act fearless. Russia continues to support militants, manages the illegal armed formations, sends military specialists and weapons to Donbas. On the other hand, the allies of Ukraine procrastinate the resolution about providing Ukraine with lethal weapons. This question is still being discussed in the USA.

Weakness has never been taken as struggle for peace. It just encourages the aggressor to conquer more territories. If it is not a tactical maneuver then we should be prepared for new commotions.

No Responses to “URTF Accumulate Equipment Lying About Its Withdrawal”