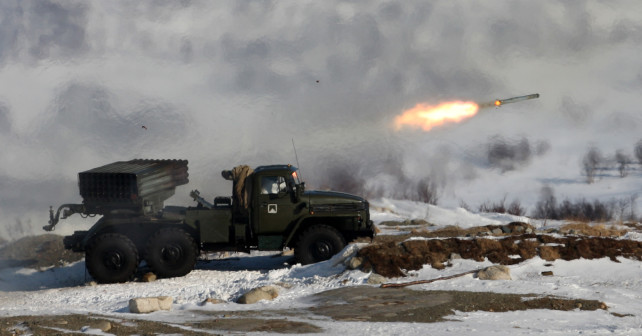 When the Malaysian Boeing 777 was shot down, the terrorists immediately and happily declared that they had downed a Ukrainian freighter and threatened that it would happen with anyone who appeared in “their sky”.

After realizing that the freighter was in fact a passenger plane, they denied everything. However, even now some people doubt that the terrorists actually shot it down.

When a bus was shelled at the town of Volnovakha, the terrorists immediately and gleefully reported the destruction of a Ukrainian checkpoint.

Then, after realizing it was a passenger bus, they again went into denial. Even now some people doubt that the terrorists actually fired at the bus.

When people got killed by mortar shells on a trolleybus stop in the city of Donetsk, the terrorists immediately accused the Ukrainian army in doing that.

Then, after realizing that 15 km (the distance to the Ukrainian army positions) was too far for a mortar, they claimed it was “a [Ukrainian] guerilla group” which on purpose had sneaked into the city to shell a trolleybus stop.  Some people still doubt that the terrorists fired the shot.

When people were killed by rockets of Grad and Uragan multi-launch rocket systems in the city of Mariupol, the terrorists immediately and happily announced an offensive against the city (and before that their leader bragged about not taking any prisoners of war).

Later, after realizing what happened, they habitually tried to blame the Ukrainian army and called it a “provocation” – but this time there was a clear evidence that the shelling came from the territory controlled by the terrorists.

Now only Russian diplomats can publicly doubt who is responsible for the death of 30 civilians in Mariupol. They habitually block decisions of the United Nations Security Council against Donetsk terrorists. The same can be said about Russian propagandists, from the hosts of the Kremlin-TV to the anonymous bloggers complaining that Mariupol had not been “liberated” earlier.

How many more casualties after the Mariupol attack are needed to realize a disastrous nature of Kremlin politics in the “Ukrainian question”?

We are talking about Kremlin politics, because the terrorists would not last even a week without Russian support, because they obtain Grads, Uragans, and Buk rocket laumchers, MANPADs, tanks and armored vehicles straight from Russia.

Are there any doubts where all this weaponry comes from? Does anyone think that Donetsk coal-miners assemble them from scratch somewhere in underground shops? And manufacture ammo and shells in the same place?

Are there any doubts that Russian army professionals sent from Russia are fighting against the Ukrainian army, not “militia” who learned miraculously to drive tanks and shell from Grads?

By the way, who remembers what Russian authorities and propagandists called the Chechens fighting the Russian army (without any tanks, armored infantry vehicles, Grad rocket systems received from abroad)? Were they called “militia”?

And Investigative Committee of Russia had not brought any criminal charges for massacre of civilians in Chechnya. But now it bravely opens criminal cases against Ukrainian servicemen.

Of course, Russian leadership unchangeably denies the presence of Russian servicemen in Ukraine.

But it denied their presence in Crimea before its annexation, and admitted it later.

In the same way it denied the presence of [Russian] “volunteers” in eastern Ukraine – and admitted it later.

Like their Soviet predecessors denied that our soldiers were fighting in Korea and Syria, Angola and Mozambique, Egypt and Yemen, Algeria and Vietnam, Ethiopia and Lebanon, and later they admitted that. This tradition is a long-term one.

The world is built in the way that any secret will be revealed anyway.

The same way as when Strelkov-Girkin talks about how the Crimean parliament was taken over and how the rebellion in Donbas started – soon we will know exactly who and how inflamed the war in Ukraine, who and how sent Russian “vacationers” and “volunteers” over there, who and in what ranks acted as the “local militia”, who sent Russian weapons and how much of them, who sawed hatred and fanned lies.

For sure, I hope soon enough, the time will come to pay for everything that has been done. And they will pay – in front of the Russian and Ukrainian people.

They will pay for killed and injured, for blast-scarred bodies and wounded souls.

We will remember everybody.

No Responses to “War in Ukraine: Mariupol’s frontier”