Weather in Moscow and the Ultimatum to the Kremlin. IL-20 in the Sky Over Syria 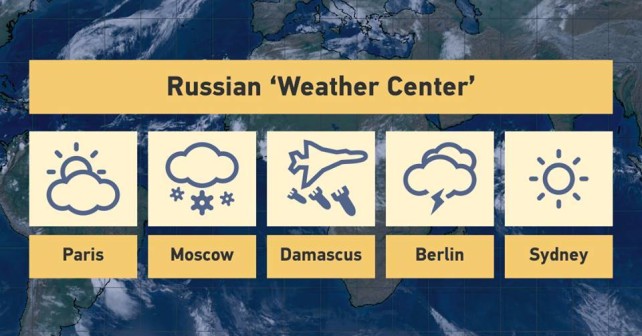 While it sleets in Moscow, a ‘precipitation’ in the form of the Russian rockets and bombs, which destroy the houses of civilians and kill peaceful citizens, is registered in Syria. The InformNapalm international community continues to provide information on the criminal activities of the Russian servicemen in Syria. Russian media and the Kremlin’s leaders claim that they fight against the ISIS’s terrorists, but in reality, they bomb the rebels of the Free Syrian Army and civilians who want to live freely in their own country.

Every our article with the personal data on the Russian Air Force’s officers is published as a part of the asymmetric response to the Kremlin for the ceasefire violations by militants in Donbas. The united Russian-separatist forces has carried out a series of provocative shellings on the positions of the Ukrainian army over the past few days.

It also should be reminded that Oleksandr Sholudko, a soldier of the 24th separate mechanized brigade, died of wounds without regaining consciousness on October, 21. He was killed in the blast of a land mine set by enemy’s sabotage-reconnaissance group near the 29th checkpoint in Luhansk Oblast, Ukraine.

But in addition to the victims of the Ukrainian front we honor the memory of the Syrian victims of the Russian military aggression – civilians who were killed, wounded or lost their homes.

A few days ago we began to receive letters from the eyewitnesses of the bomb strikes in Syria.
Here is a quote from one of the letters:

“Greetings, dear editors of InformNapalm website! First, we sincerely thank you for the support of the Syrian people and the understanding of the situation. We all faced the powerful Russian machine of lies and terror against the free people. Impressed by your position on the war in Syria, we consider it necessary to share with you a link to on-the-scene coverage. We will be glad if you direct the attention of the Ukrainians and those Russians, who have not yet lost the ability to think independently and impartially, to this video published on October 18. It is available at https://youtu.be/pwviRbC2SGE.” Signature: Musulmanin [Muslim]

Screenshot of the letter

Before proceeding to the publication of the personal data of a war criminal from the Russian air forces, we ask you to take a good look at the video we got. Its characteristic feature is the sincerity and calmness of the person who takes the video – he did not try to shoot it like ‘LifeNews’ or ‘Russia 24’ Russian propaganda channels which whip up hysteria. He reveals the truth about the war and the opinions of passers-by.

Not only the senior military officials, but also every soldier or officer is guilty in the crimes of the Kremlin in both Ukraine and Syria. Everyone should bear the sole responsibility and not take refuge under the excuse of an ‘order’. The Russians, with the acquiescence of the which the perfidious and cynical war crimes are carried out, are guilty as well.

Conducting the investigation and analyzing the open source data, we got some information about the Il-20 electronic warfare aircraft (NATO reporting name – Coot) usage in Syria. We found detailed data on the forward air controller, who disclosed the information about his presence in Syria and about that warplane.

Captain Aleksandr Ozhgibesov (born on February 20, 1988) served in Khabarovsk, finished Eisk Military Aviation Institute in 2010 and became a captain of Russia’s air forces in July of 2015.

All the data is taken from the social profiles of Ozhgibesov. These are the links to the archives of the profile:

Also we have all the data and profile’s archives of Mrs. Ozhgibesov – her position and exact place of work as well as the address of Aleksandr Ozhgibesov’s residence in Khabarovsk. We are not going to make this information publicly available for ethical reasons. Everyone has the right to make mistakes, and this officer still can mend his way by writing to us via the feedback email. We hope that he will refuse to execute criminal orders of the Kremlin. This is not blackmailing, but our asymmetric response to the Russian military intervention to Ukraine and Syria.

Next, a series of screenshots from the social profile of Ozhgibesov is represented. Our conclusions about his involvement in the Russian military action in Syria was made based on these finding. 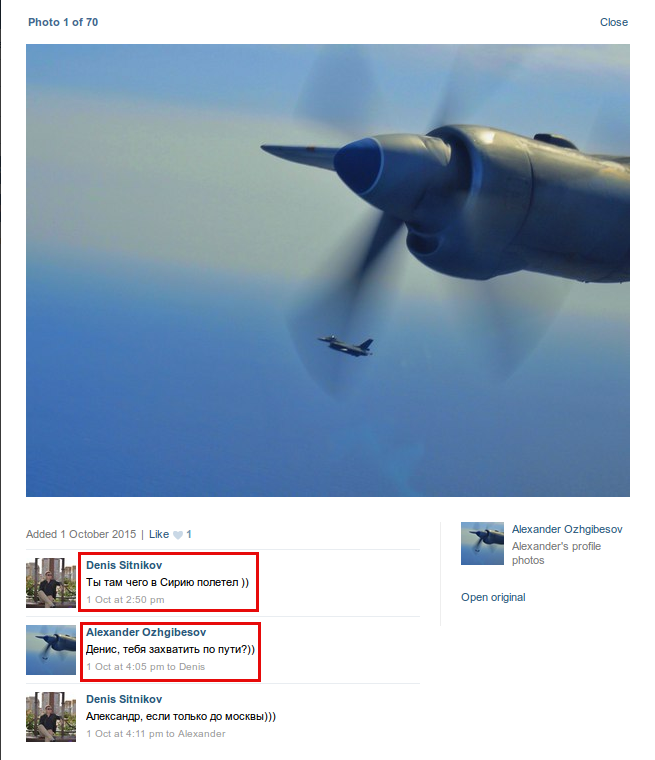 The photo shows the propeller and the nacelle of Ai-20 engine. Such engines are used in IL-20 aircrafts. A F-16 fighter, presumably belonging to the Turkish Air Force, can be seen in the background. As you have read before, the Russian warplanes have repeatedly violated the Turkish airspace in areas adjacent to the sites of air strikes in Syria. 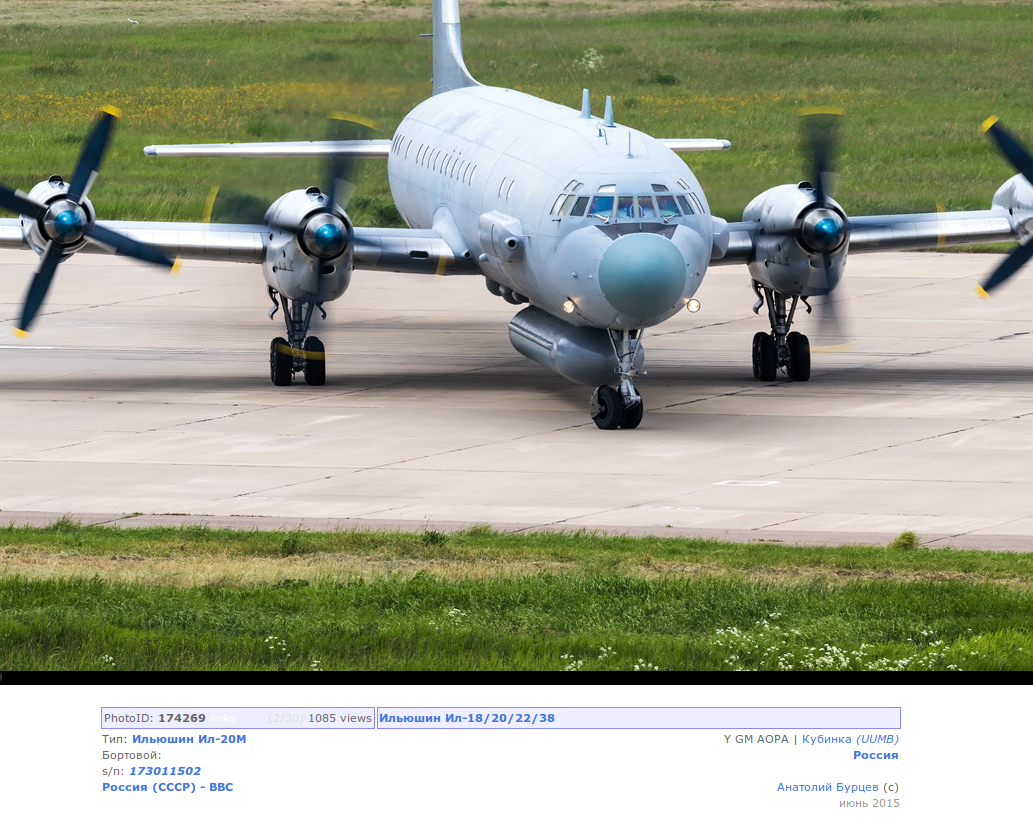 It is documented that IL-20 aircrafts were based on the Central airport of Khabarovsk. Also they were on overhaul reconditioning in Voronezh in 2009.

The following photos from captain Ozhgibesov’s profile also reveal the nature of his service: 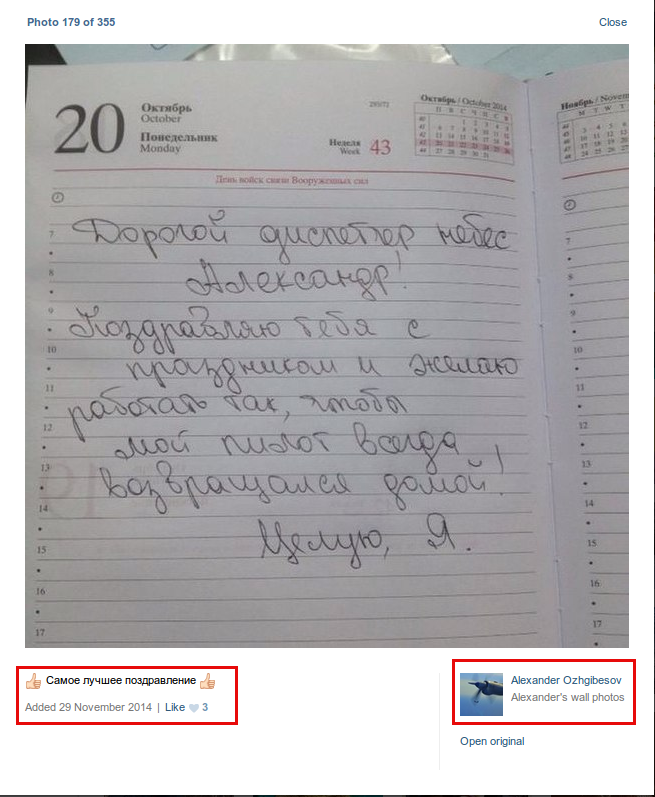 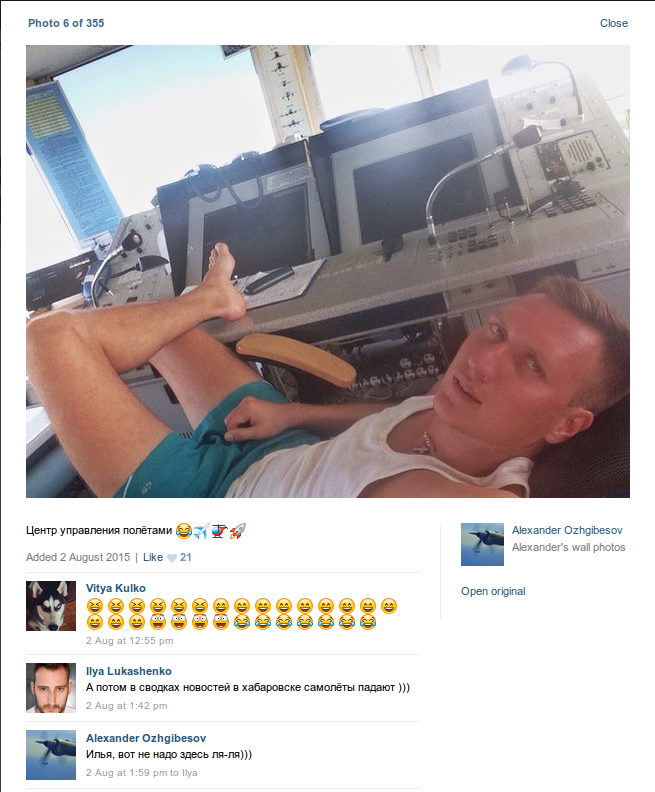 It is an interesting fact that in April of 2015 captain Ozhgibesov received a permission to leave for a trip abroad: 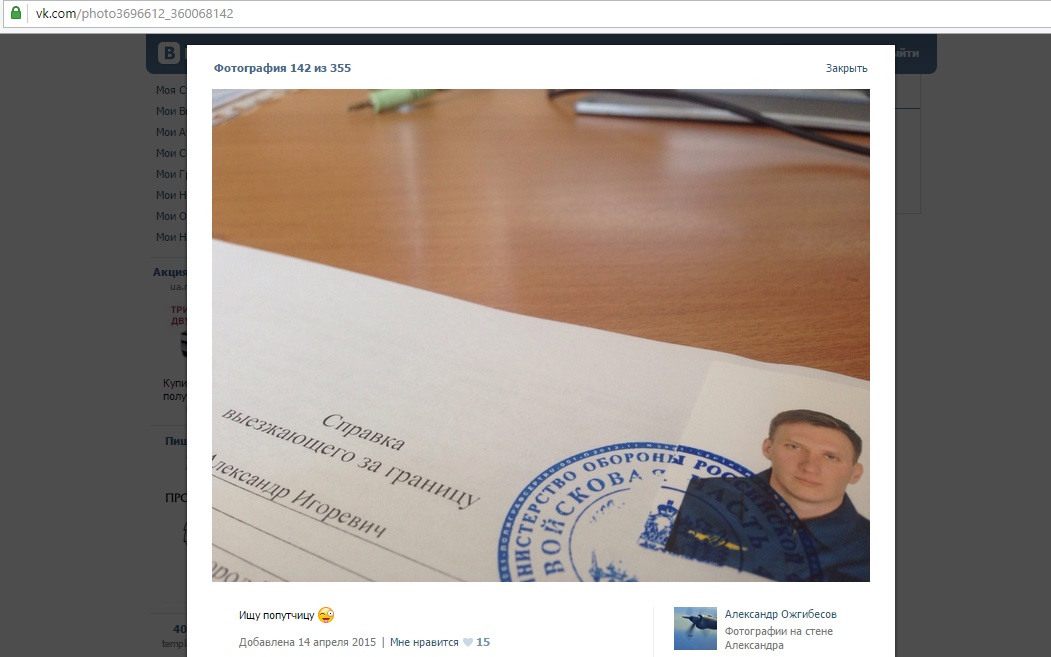 we can assume that Aleksandr Ozhgibesov is currently on the Syrian mission as a dispatcher and the aviation command and control officer.

Confirmations of Il-20 aircrafts’ participation in reconnaissance flights in Syria were found also in other places.

A story on Zvezda [Star] Russian TV channel named:
“How ISIS’s militants are scanned from the sky: a mystery Il-20 aircraft in Syria”

4 Responses to “Weather in Moscow and the Ultimatum to the Kremlin. IL-20 in the Sky Over Syria”