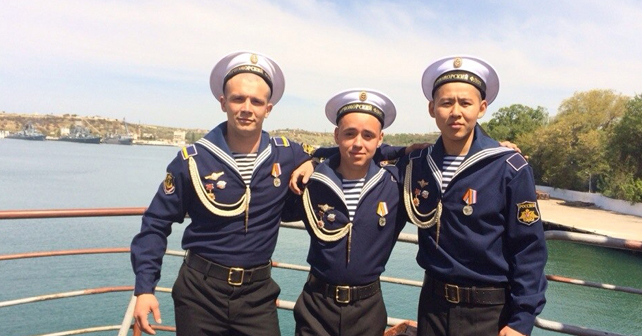 Sailors of the 197th Assault Ship Brigade of the Russian Black Sea Fleet participated in the operation to seize the Crimea. Volunteers from the InformNapalm international community found relevant photo evidence. 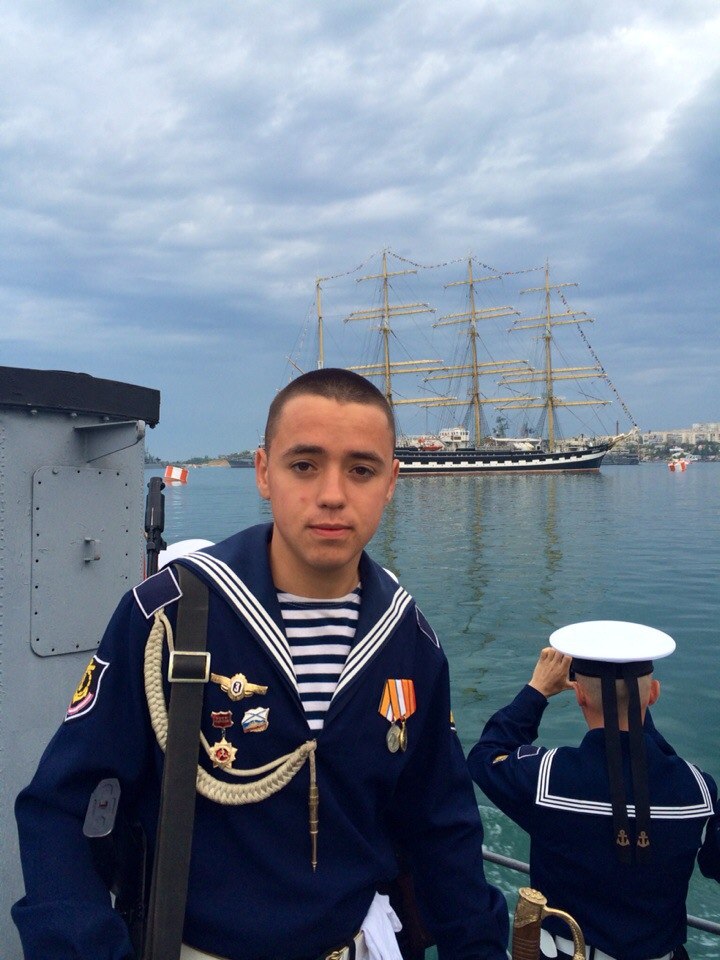 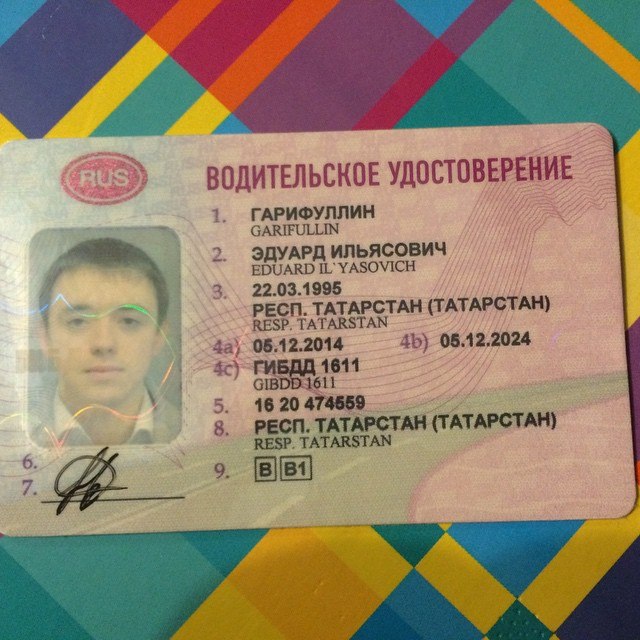 His hometown is Kazan, the capital of the Republic of Tatarstan. He served on the Large Landing Ship Nikolai Filchenkov. 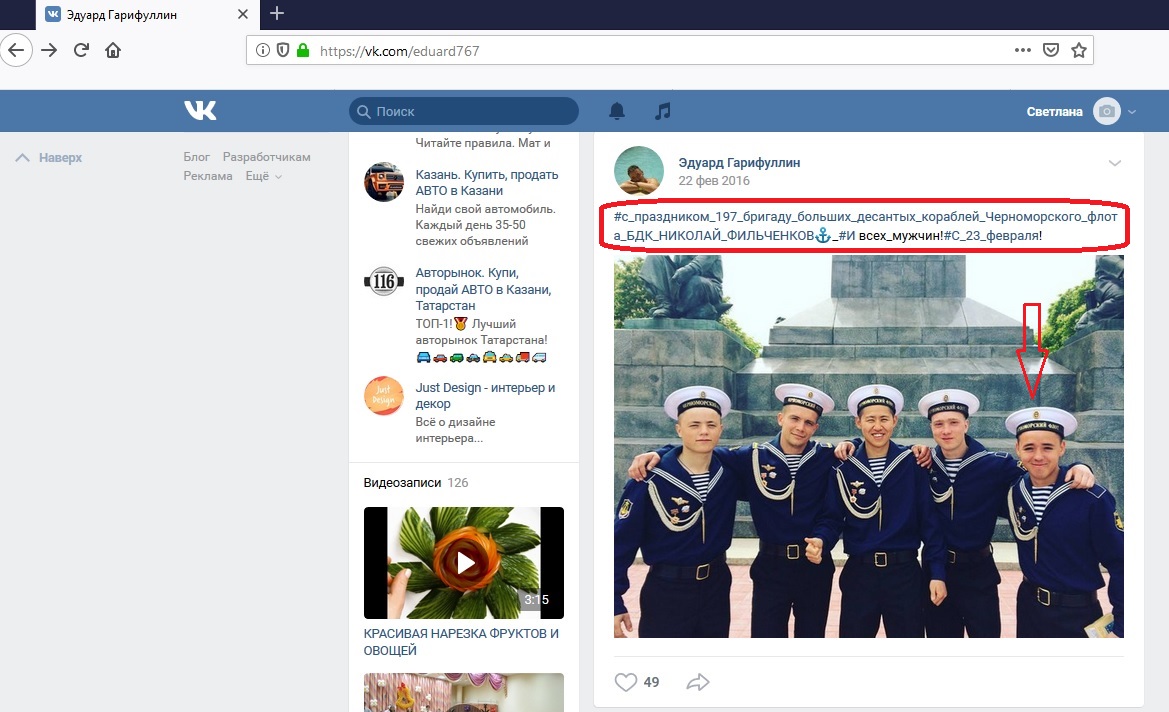 This ship is assigned to the 197th Brigade of the Black Sea Fleet based in the occupied Sevastopol (Ukraine, Crimea), military unit 72136.

Garifullin published photos of both the award for his participation in the seizure of the Crimea and its certificate. 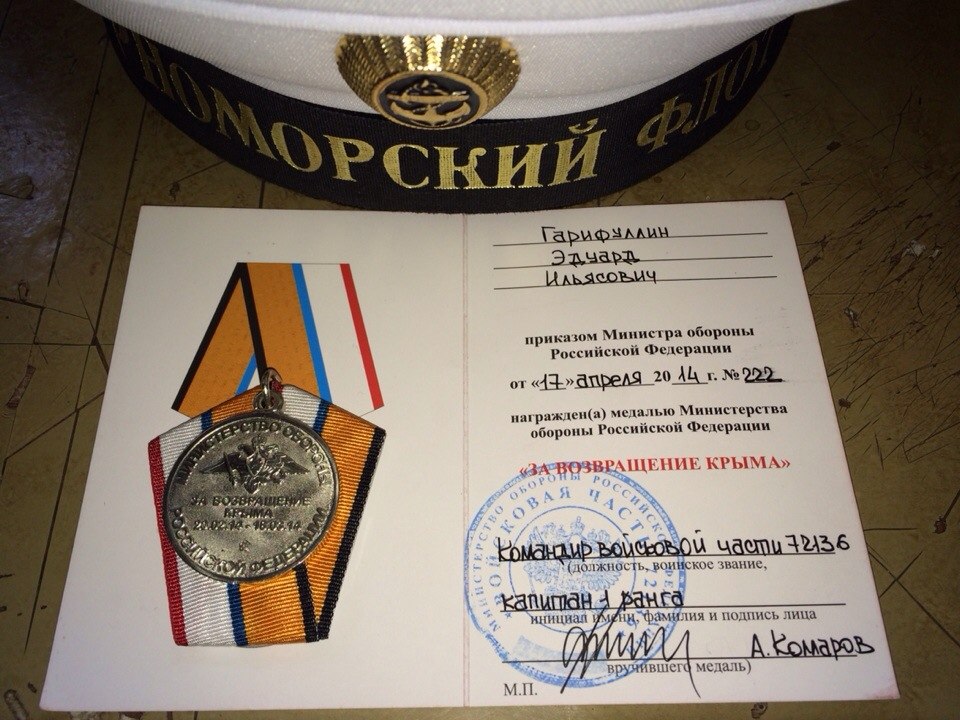 Also in Garifullin’s account, we found a snapshot that became the starting point of the investigation: three sailors standing on the deck of a ship with medals for occupying the Crimea. The photo includes Garifullin (center) and his two colleagues. We found their names. 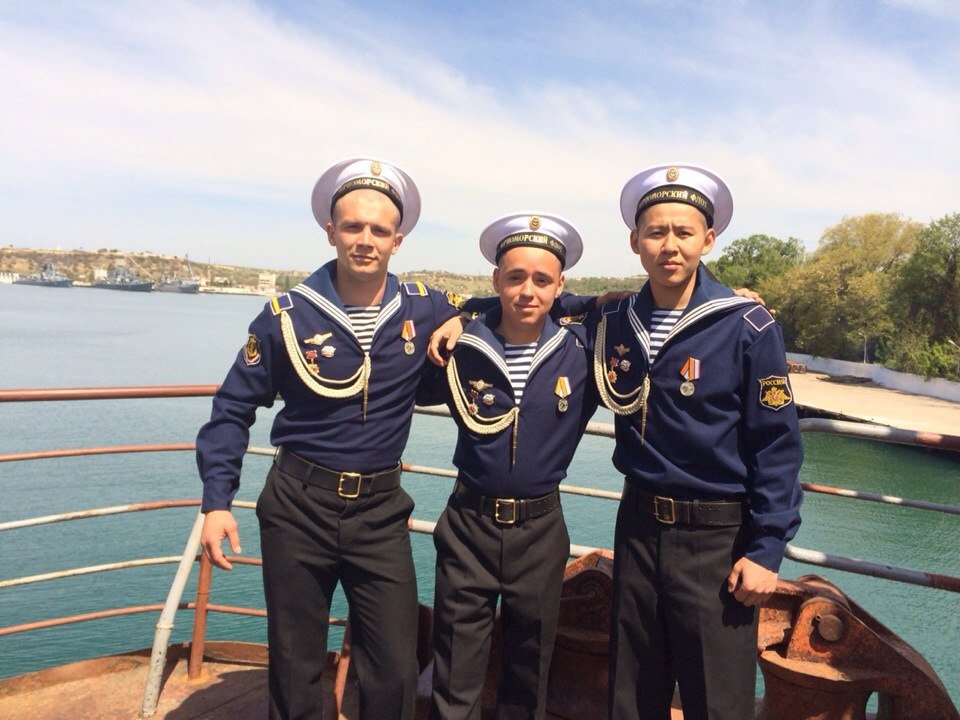 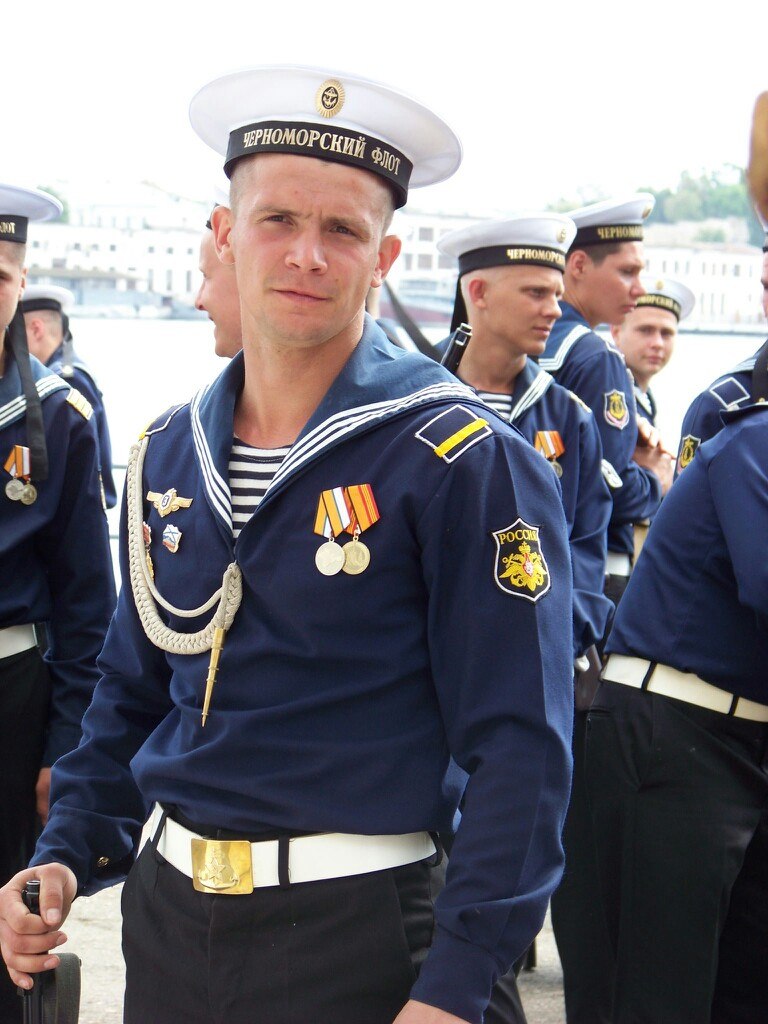 Born 02/19/1990. Lives in Taganrog (Rostov Oblast, Russia). Studied in Taganrog in schools #6 and #33. Afterwards, he graduated from Taganrog Institute of Management and Economics. Served at LLS Nikolai Filchenkov.

Like Garifullin, he published his photos of a medal for the occupation of the Crimea and a medal award certificate.

Apparently, Garifullin and Shustov photographed their IDs together: the composition and the surface under the certificates and the sailor hat are identical. 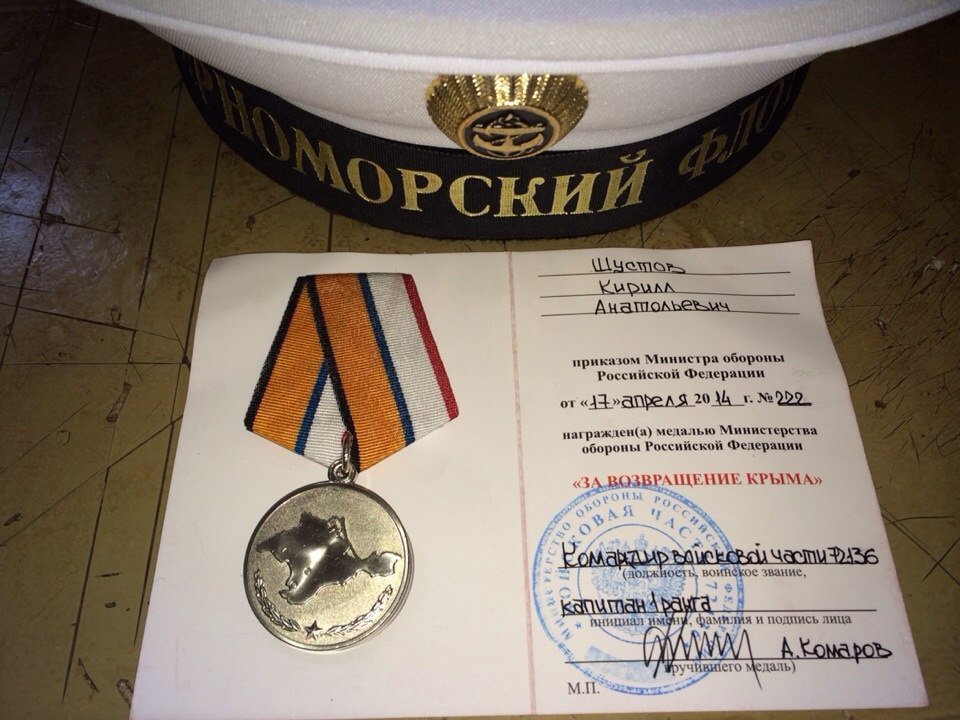 The third person in the photo, Karu Yamanov, was identified thanks to another sailor, who was also awarded a medal for the occupation of the Crimea. Let’s talk about him first. 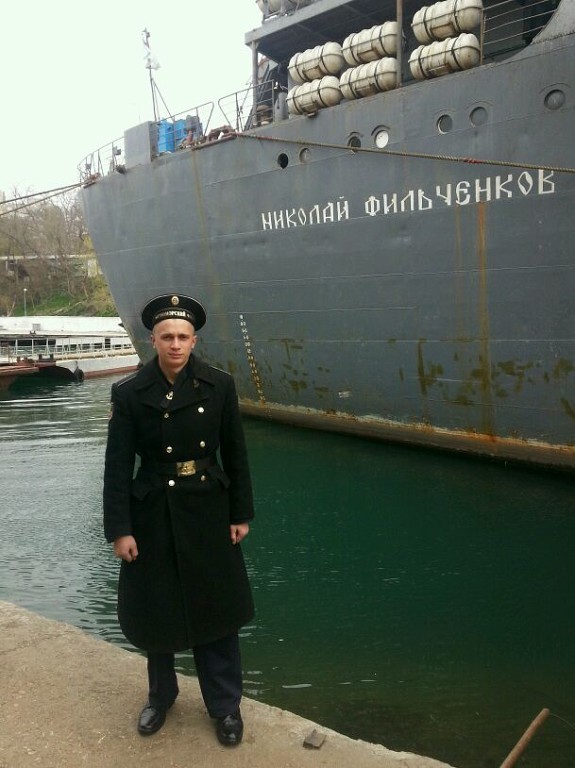 Born on 05/31/1993. Lives in Krasnodar (Krasnodar Krai, Russia). On his OK social network page, he listed “Donetsk” as his birthplace. This could be the Ukrainian Donetsk, because Derkach’s father attended school in Makiivka, and now lives in Krasnodar. Other relatives live in different cities of Russia and in the occupied territory of Ukraine.

Vladislav Derkach studied in Krasnodar, at Southern Institute of Management. He served at LLS Nikolai Filchenkov. Below is a snapshot of Derkach’s album, in which we see Eduard Garifullin (first left): 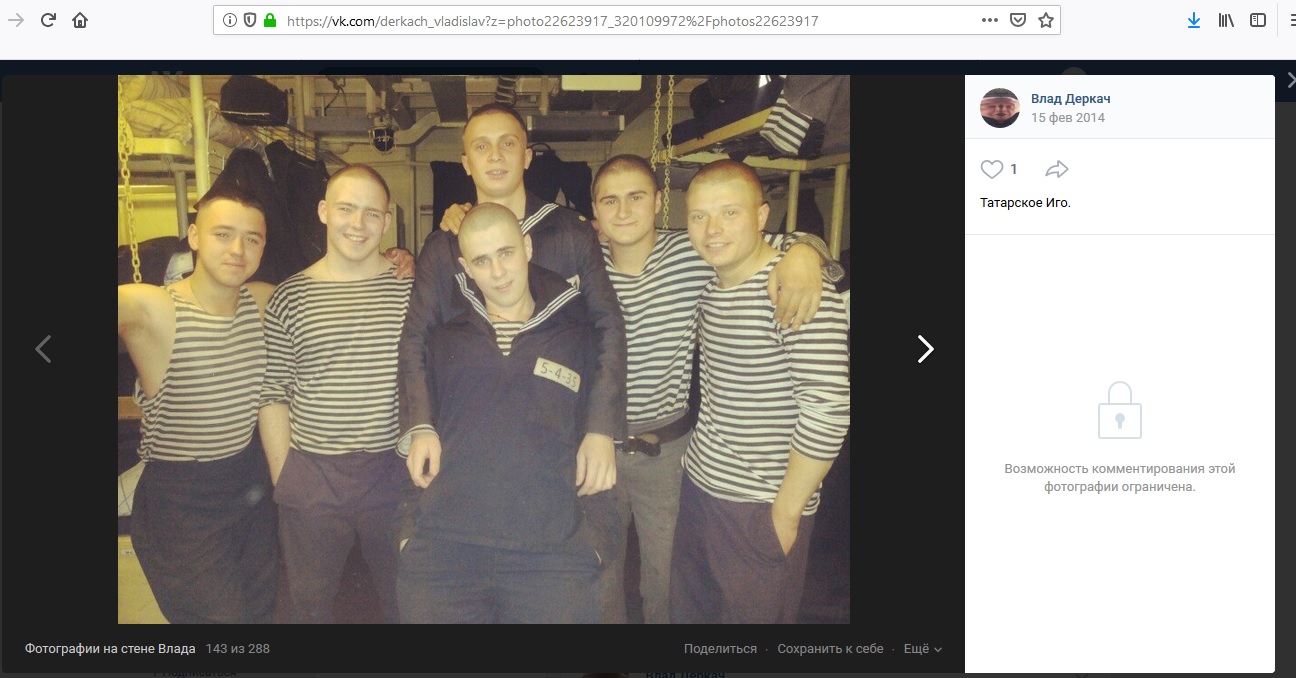 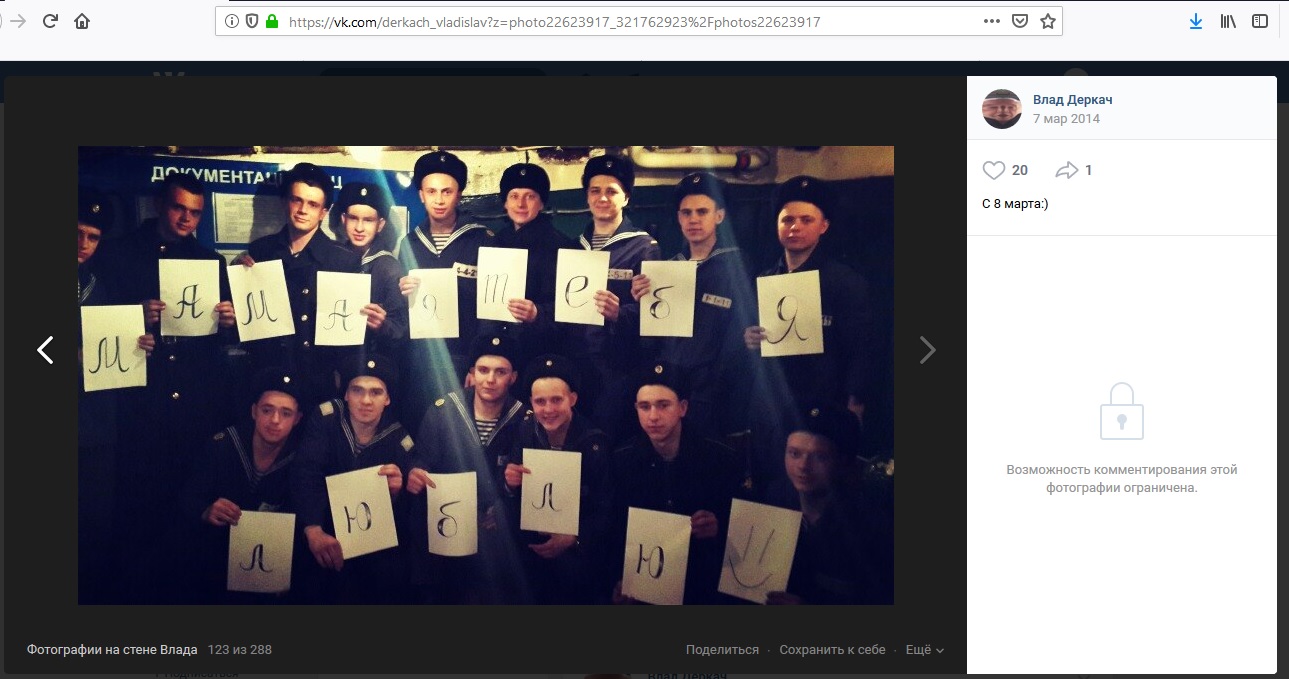 Derkach also published a photo with a medal for the occupation of the Crimea and a photo of the certificate for the award. 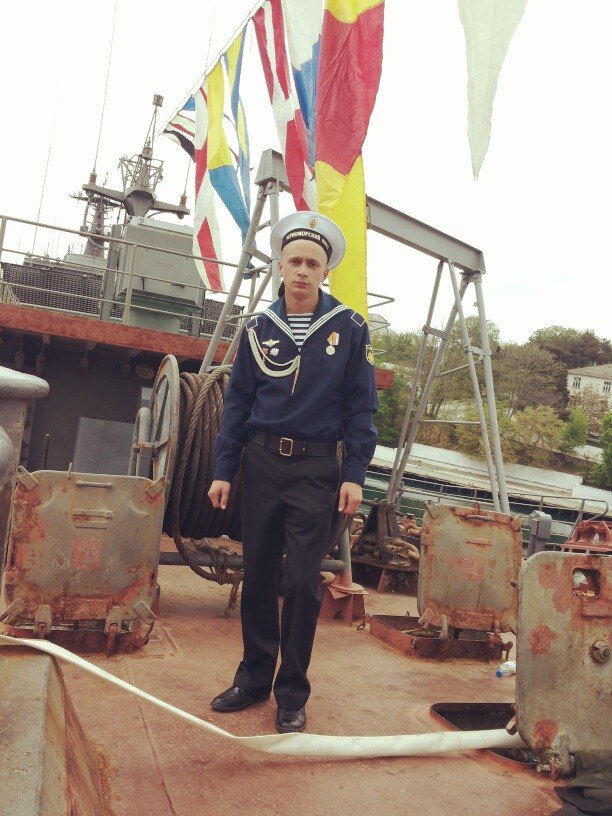 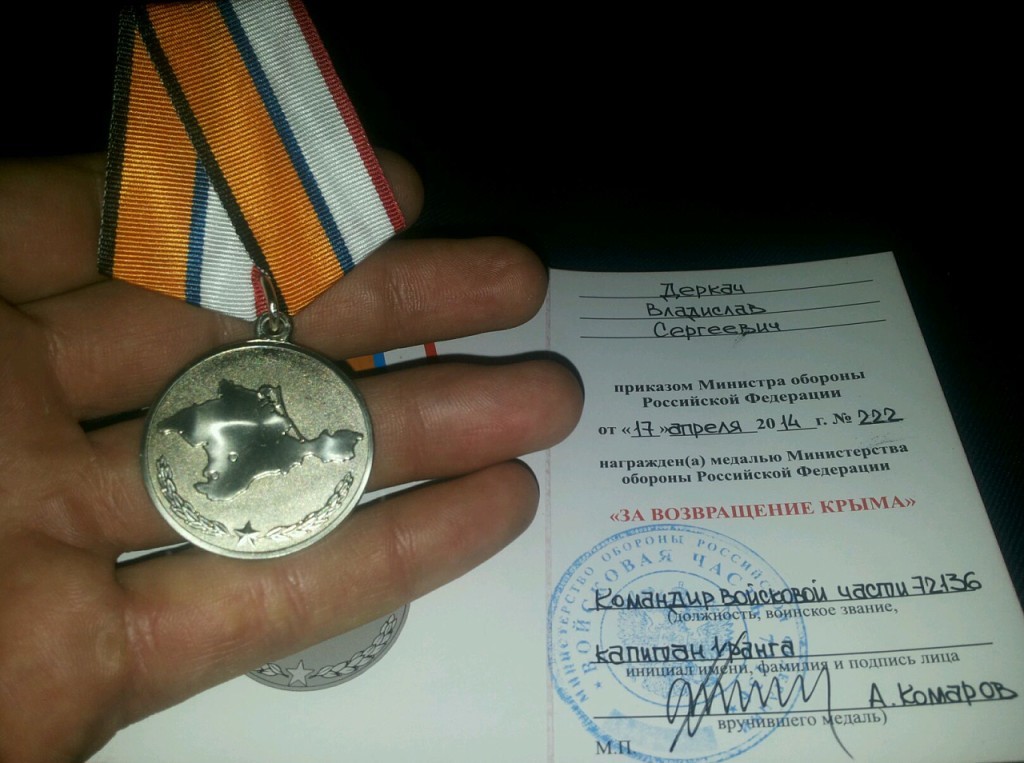 Here is Derkach with the sailor we already know from the photo that became the starting point of this investigation. Caption: “With Karu. Sevas” (Sevastopol). 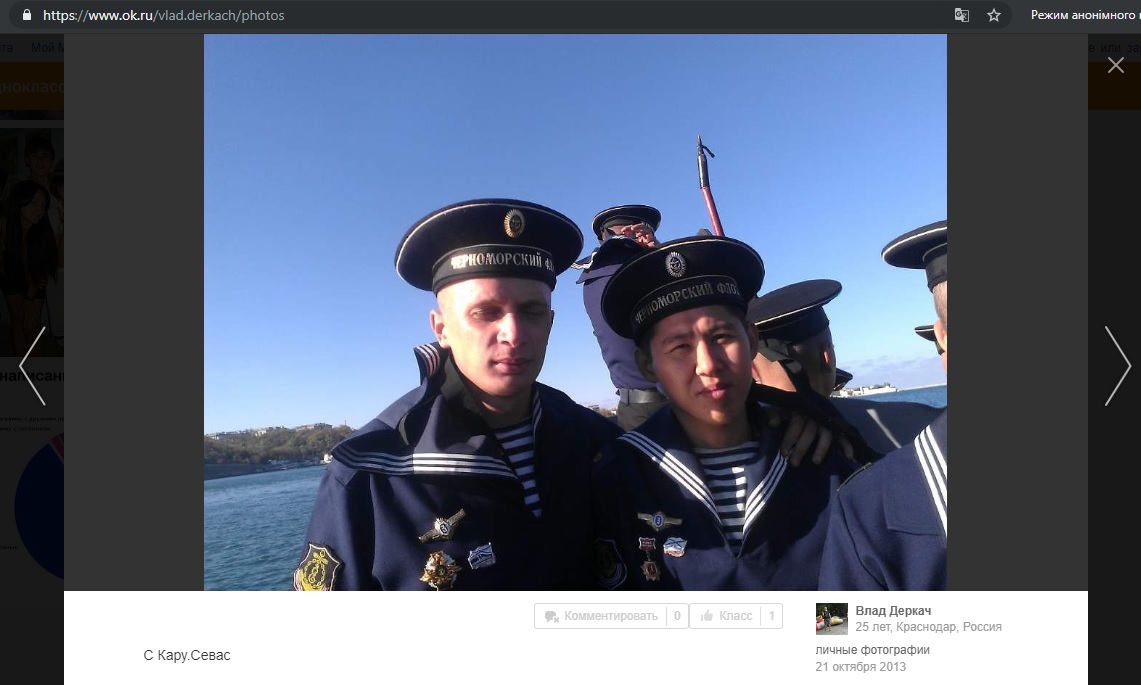 So, the name of the third sailor is Karu. The name is quite rare. Among the friends of the subjects of this investigation and other sailors from LLS “Nikolay Filchenkov”, whom we will discuss in future articles, there is only one Karu: Karu Yamanov.

Another photo from Derkach’s account, in which Karu Yamanov is also present: 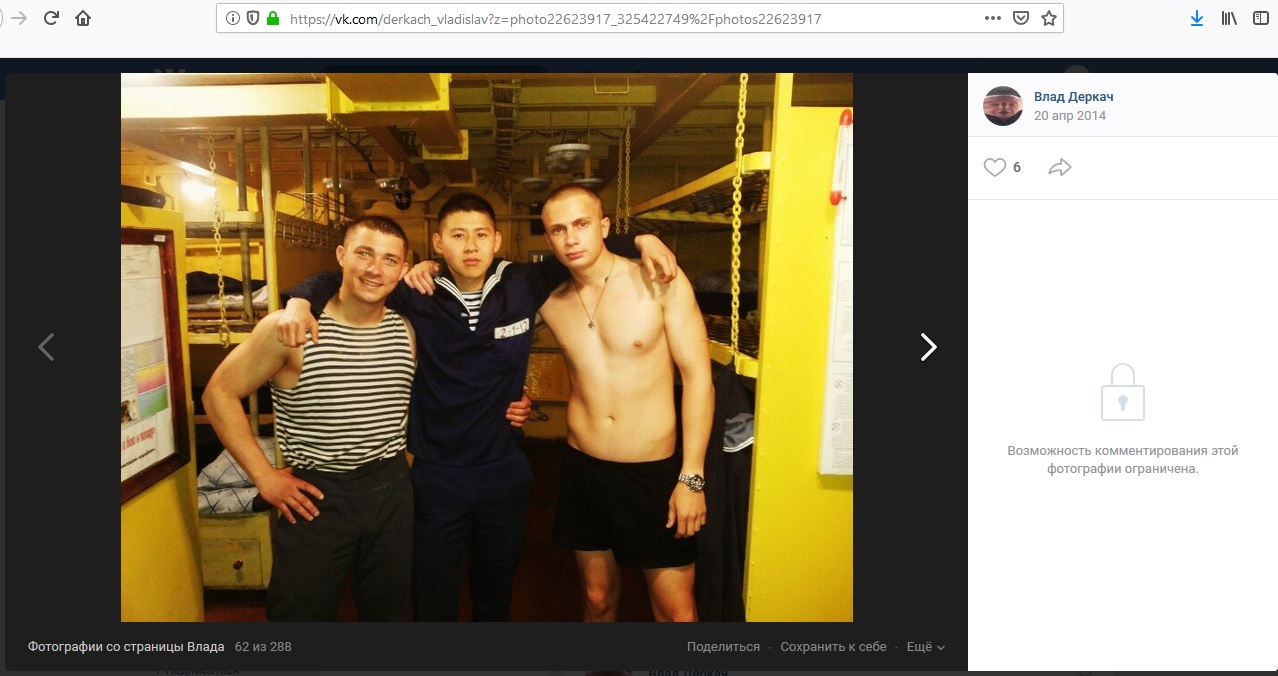 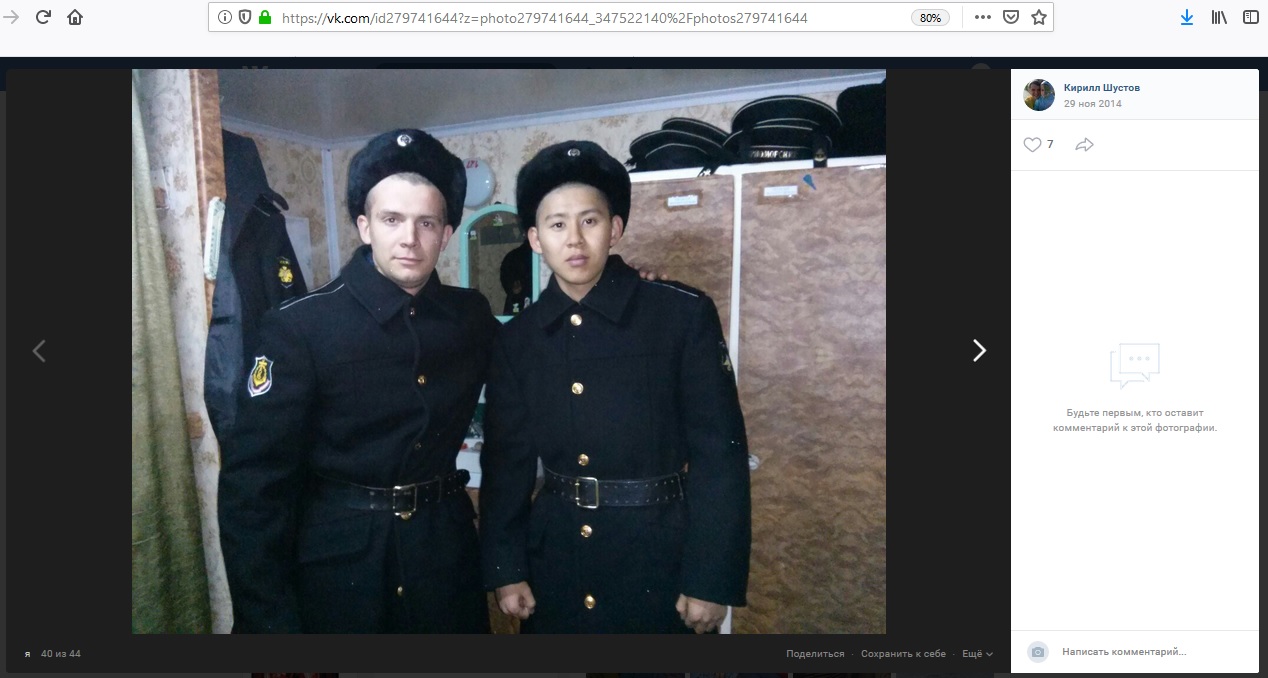 In the VK social network we found another profile with the name of Karu Yamanov. According to the age specified in it, this may be our person. The place of residence is Elista, the capital of Kalmykia, and the flag of Kalmykia is placed on the avatar in the first profile. Thus, we can assume that this profile also belongs to Karu Yamanov from the 197th Brigade.

The 197th Brigade was formed in 1966 as a brigade of amphibious assault forces. It performs tasks in close conjunction with marines. Large amphibious ships are intended for the landing of amphibious assault forces and the transfer of troops and cargo by sea over long distances. The ships are capable of transporting various types of armored vehicles. LLSs are usually equipped with air defense missile systems and artillery guns, as well as means of fire support of the landing force.

Award documents to the medals for the occupation of the Crimea were signed by the commander of the 197th Brigade, Captain 1st Rank Alexey Vladimirovich Komarov. 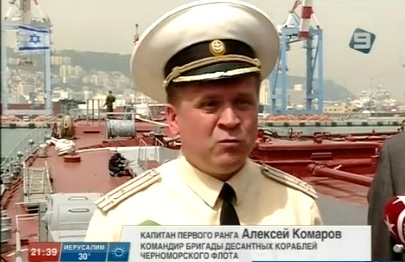 Source of the photo

In March 2015, the command of the brigade was given to Sergey Zvyagin, since in December 2014 Komarov was promoted and became the Chief of Staff of the occupants’ Crimean Naval Base (CNB). In October 2018, Komarov was temporarily in command of the base.

Aleksey Komarov as the Chief of Staff of CNB is included in the database of the Myrotvorets (Peacemaker) Center. 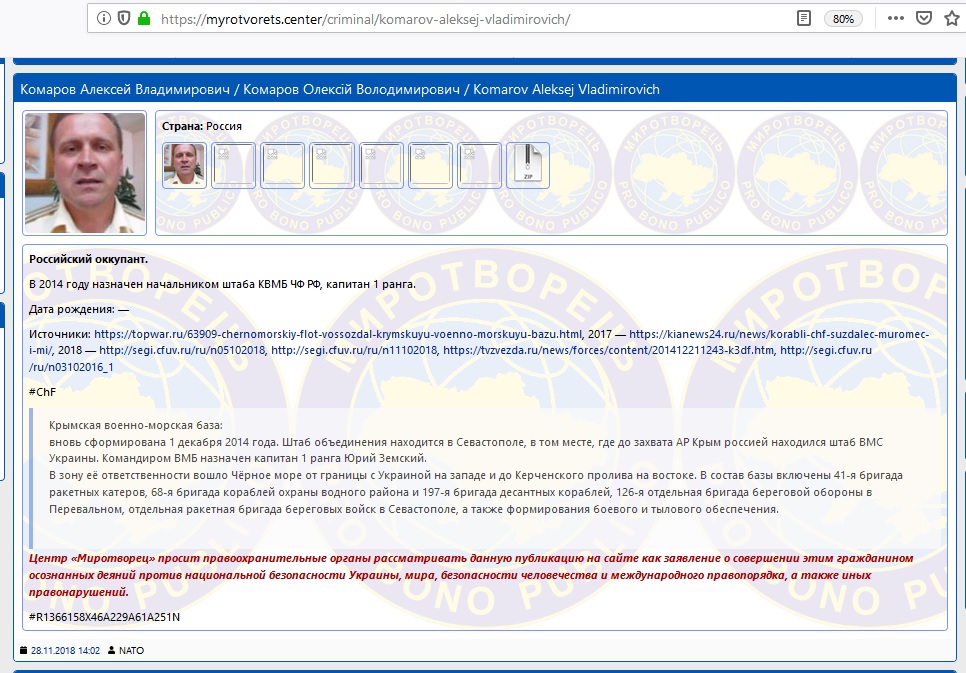 Komarov is also a direct participant of the operation to seize the Crimea, commanding the 197th Brigade’s participation in the aggression against Ukraine.

This ship was actively used as part of the so-called Syrian Express and repeatedly appeared in our investigations. It should be noted that Russia carried out the transportation of military goods to Syria long before the fall of 2015, when the start of an air military operation was officially announced.

In 1999, LLS Nikolai Filchenkov delivered a company of marines from the territory of Ukraine to the North Caucasus, violating the agreement on the basing of the Russian Black Sea Fleet in Ukraine.

And in 2005, Nikolai Filchenkov violated the state border of Ukraine and landed naval troops and equipment of the 382nd Marine Battalion (based in the settlement of Temryuk, Krasnodar Krai) in the vicinity of Feodosia. The Foreign Ministry of Ukraine handed over a special note to the temporary charge d’affaires of Russia, and the Head of the SBU Turchinov stated that Russia would continue being impudent for as long as Ukraine allowed it. The Verkhovna Rada demanded an investigation into the fact of an armed invasion, a number of people’s deputies insisted on making the decision on the early withdrawal of the Russian fleet from the territory of Ukraine. Russia recognized the illegality of its actions, explaining them with a technical error. However, after the events of 2014, the technical error version looks unconvincing.