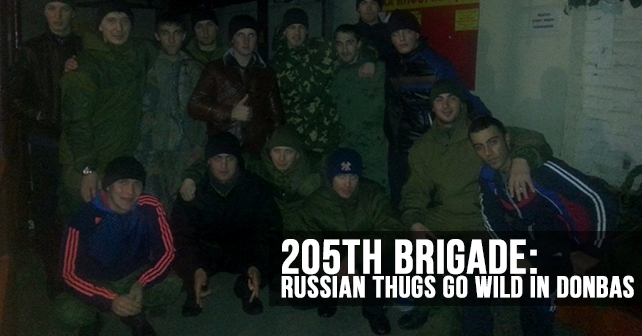 InformNapalm international intelligence community continues to fill the database of Russian troops fighting in the Ukrainian Donbas. In this OSINT investigation, we present further evidence of the participation of contract servicemen from the 205th Separate Motorized Rifle Brigade (205th SMRB) of the Russian Armed Forces (military unit 74814, home base: Budyonnovsk, Stavropol Krai) in hostilities against Ukraine. If previously military personnel of the 205th SMRB were documented in Horlivka, Shakhtarsk, Makiivka and Donetsk – that is in Donetsk Oblast, now the geography of their presence was extended to occupied Luhansk.

In March 2015, InformNapalm published an analysis by blogger stabilizec on the participation of servicemen from the 205th Separate Motorized Rifle Brigade (military unit 74814, home base: Budyonnovsk, Stavropol Krai) in hostilities in the Donbas.

Information about eight contract servicemen, who in their social media accounts had evidence confirming their deployment to the Donbas dated from the end of 2014 to beginning of 2015, was presented.

This time, this unit has drawn our attention because of the formation of the new 150th Motorized Rifle Division in the Russian Sothern Military District. It is known that the 205th SMRB from Stavropol Krai, as well as the 33rd SMRB from Adygea, will be included in it. The servicemen of these units are trained in the Kuzminsky, Kadamovsky and Millerovo training grounds next to the border with Ukraine which are assigned to the new division.

So, when studying a social media account of a contract serviceman from Stavropol who is currently at the training camp in Rostov Oblast, a photo from the previous investigation was discovered. 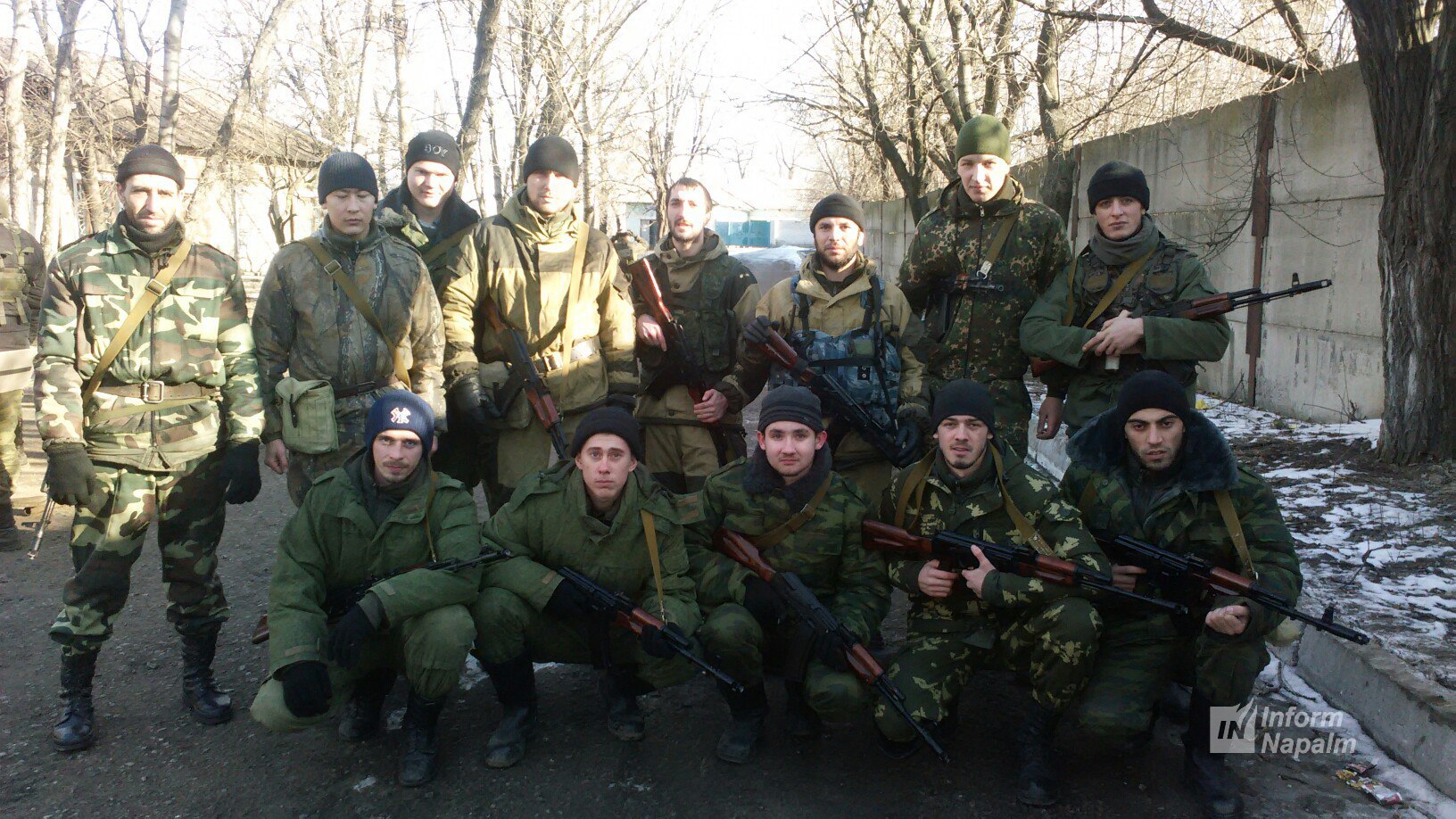 This picture was featured in earlier investigations, but was uploaded by Oleg Zhukov, a Russian serviceman from the military unit 74814 (archive of his social media profile, photo album, and friends), to his photo album just in December 2016. Note that the Russian military in this group photograph are dressed in non-statutory uniforms. 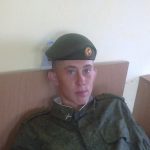 It was easy to identify Alexander Chumakov, a contract serviceman from Budyonnovsk, in the picture. Soon after his unlawful participation in hostilities in the Donbas had been reviled, Chumakov’s account was removed. But screenshots and photographs confirming that he was a professional soldier are still available here. The above-mentioned group photo was uploaded to Chumakov’s album in March 2015 (link to the archive), which allowed to determine the time when the group of Russian troops were in the Donbas.

In the lower row of the group photograph, Alexander Nikitin and Artyom Kazaryan, who was not documented previously (archive of his social media profile and friends), both are servicemen from the military unit 74814, were also identified. 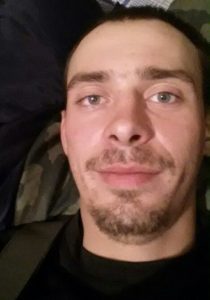 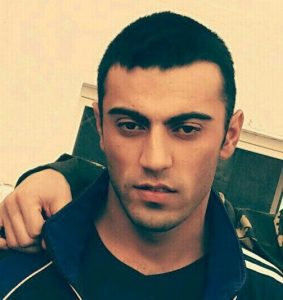 Kazaryan’s photo album on Odnoklassniki social media website contains photographs from the period of his conscript service in Budyonnovsk and does not have photos of his Donbas deployment, but because of his colleagues’ carelessness, Kazaryan became the object of our investigation. 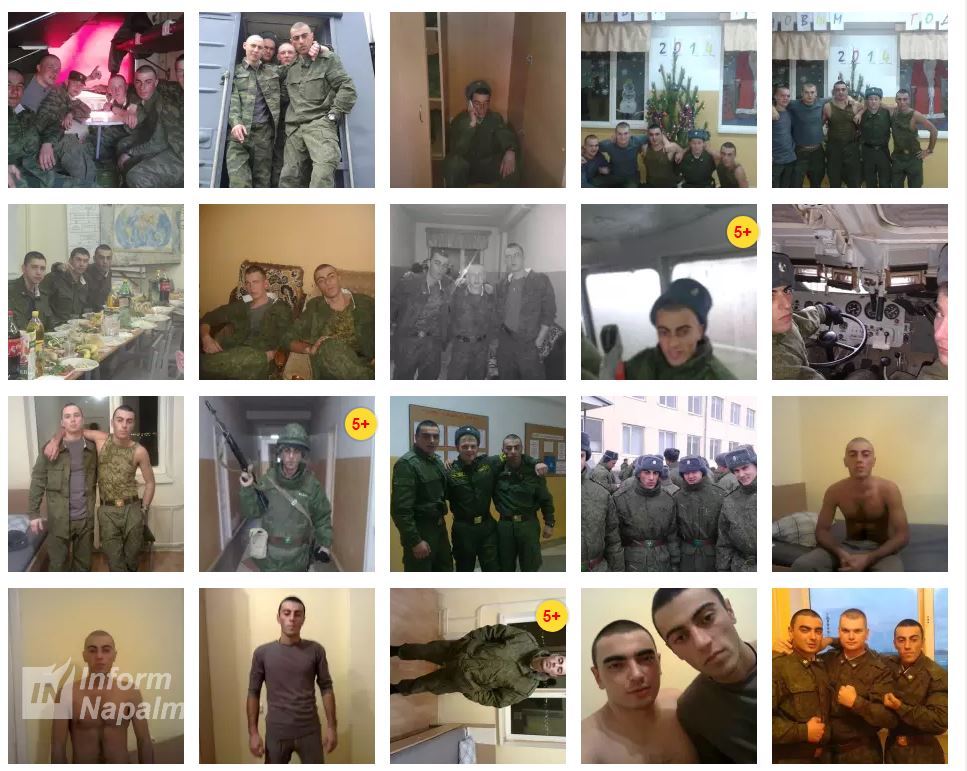 Let’s return to Oleg Zhukov, who was cautious and waited until December 2016, but then relaxed and posted pictures of his trip to the Ukrainian Donbas. 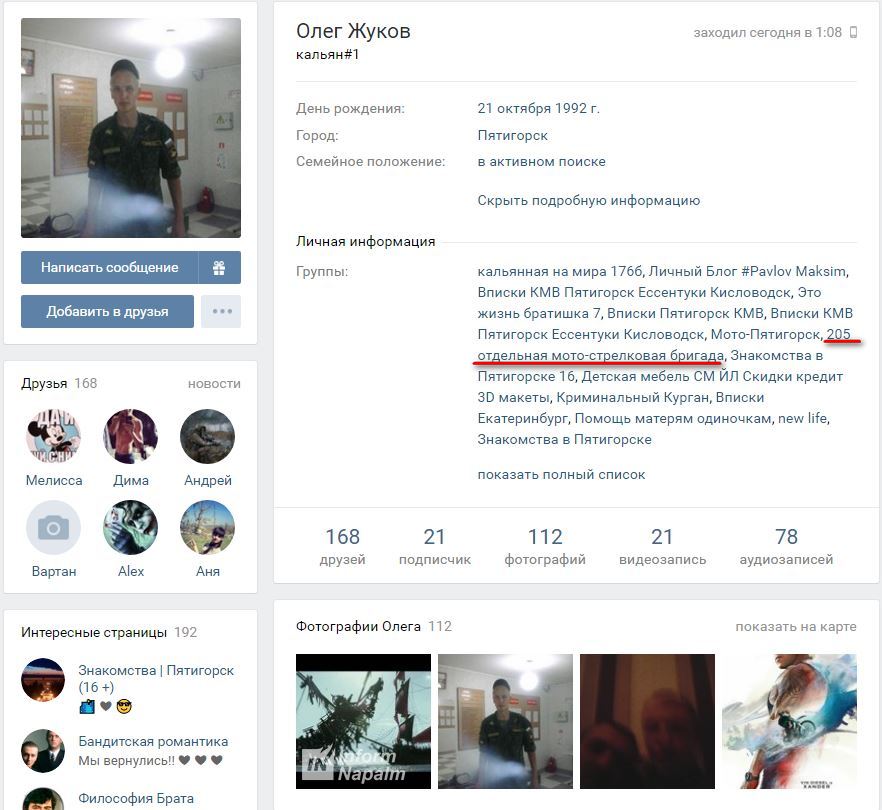 On several photographs in Zhukov’s album, one can see servicemen dressed in untidy, non-statutory uniform, wearing the Saint George ribbons, with empty shell boxes scattered around. All of this indirectly points to him being in the Donbas and fighting in a terrorist gang. 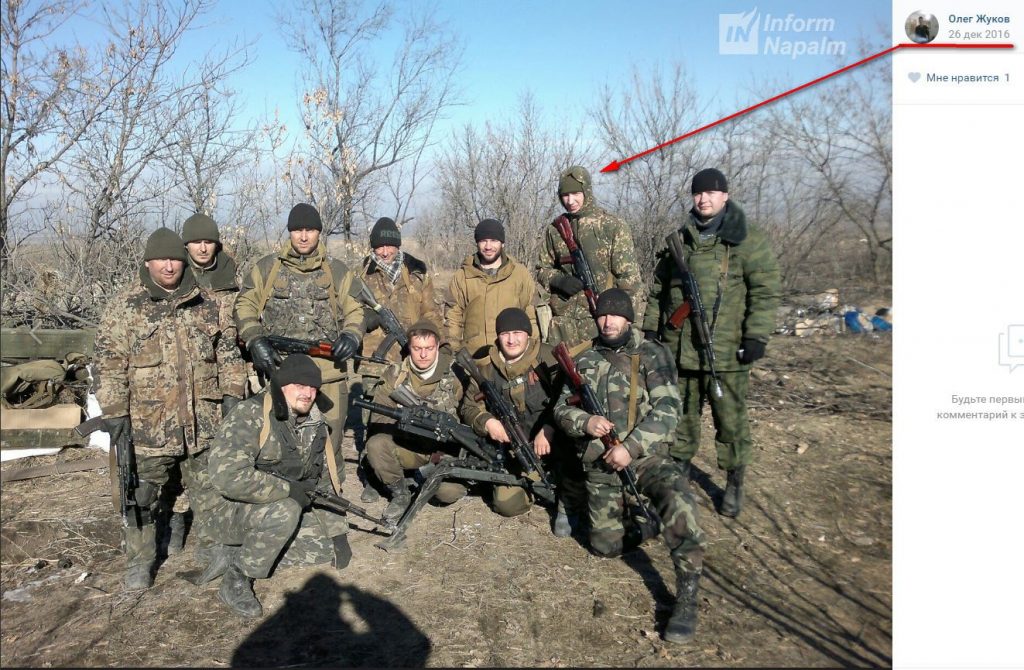 Several Artem Kazaryan’s photos, as well as a group photo of unshaven soldiers Kazaryan, Zhukov, Chumakov and Nikitin in the sauna, indirectly imply that they were taken in Ukraine at the time of their joining a “team of local miners”. This is not the first case when Russian contract soldiers post their photos in Donbas saunas, demonstrating small pleasures of life to their friends. For example, servicemen from the Russian 138th SMRB also took a picture in a sauna in Donetsk. It is a Russian tradition to go to sauna and then to invade someone else’s apartment, or even a country, that is known from the old Soviet film. 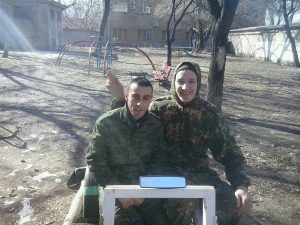 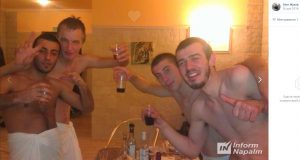 An important detail of the identification is a photo of the obelisk in Luhansk. In Zhukov’s photo album, there is a picture of the obelisk on Oboronna Street in Luhansk, which indicates that the 205 the SMRB had expanded their presence to Luhansk Oblast. 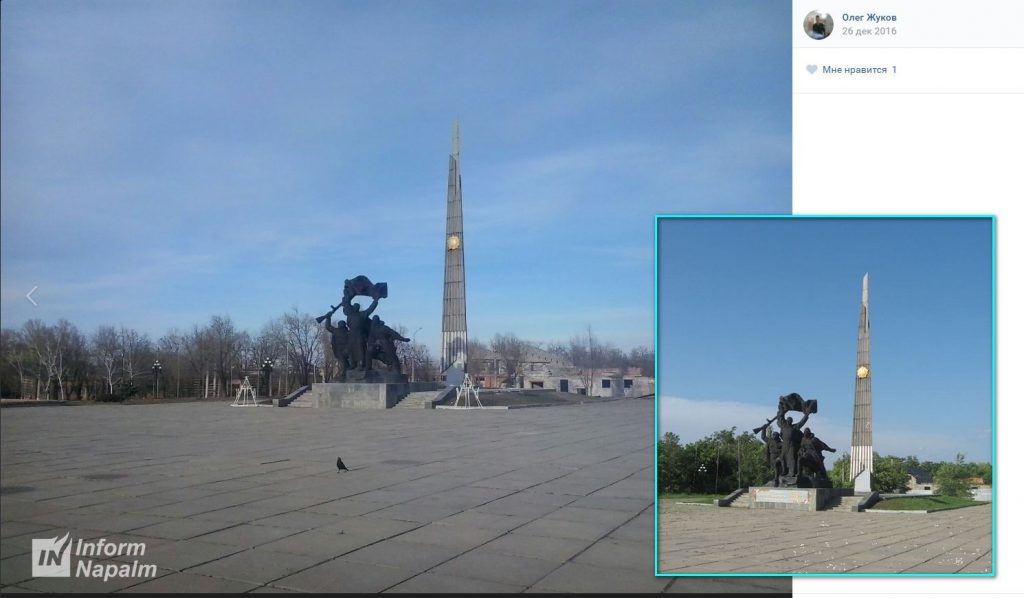 Thus, in the course of this investigation, we added new names to the list of servicemen of the 205th SMRB from Budyonnovsk. Previously, soldiers from this military unit posted photographs taken in Horlivka, Shakhtarsk, Makiivka, and Donetsk, but now we see that the geography of their presence expanded to occupied Luhansk.

We have purposely chosen a photo in which military personnel of the 205th SMRB are dressed in mixed uniforms and sports suits and look more like thugs than soldiers of the country which demands respect for itself in the international arena. It is a good illustration of modern Russia. Just recall the recent speech of Russian “diplomat” Vladimir Safronkov at a meeting of the UN Security Council which filled the Internet with new memes about Russian diplomatic culture. 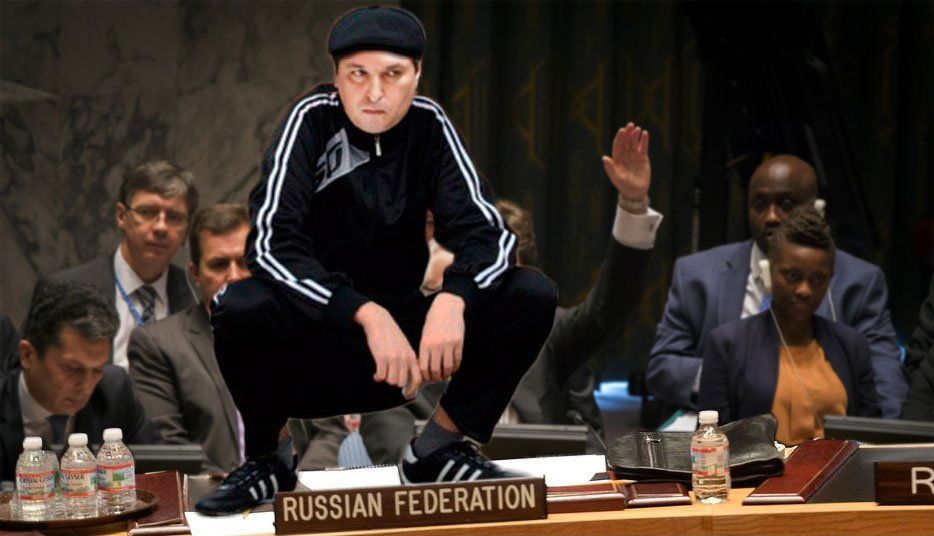 By Victory Krm exclusively for InformNapalm.