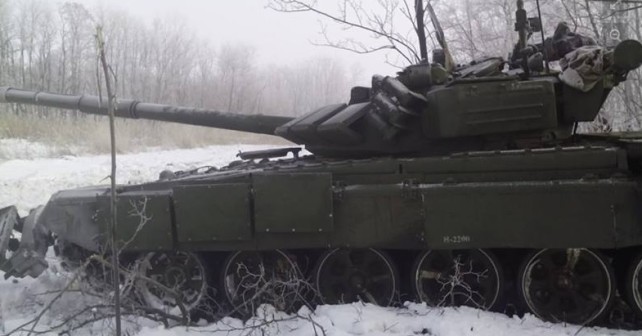 More and more often we get information from the Ukrainian mass media about the Russian armed forces invading Ukraine. Actually, the Russians do not need to go too far in order to enter Ukraine. Some Russian army groups have been staying for months near the Ukrainian border and waiting for something.

One such group is the 28th Motorized Rifle Brigade, located in Yekaterinburg, Russia. For several months soldiers from that brigade have been staying in Rostov Oblast. Officially they are either on a military exercise, or an assignment. According to the posts of the brigade officers in social media, they used to spend winters in Yekaterinburg or Khakassia (a region in Siberia). However, for some reason, this year they are staying in the fields near the Ukrainian border.

Not so long ago, Aleksandr Ustinov from the Siberian city of Tyumen, a soldier of that brigade, updated his status on VKontakte profile as being in Donetsk and posted photos with a promising comment “Let’s go!”. https://psb4ukr.org/criminal/ustinov-aleksandr/, https://informnapalm.org/4897-rossyjskye-soldaty-c-voennoj-bazy-okolo-rostova-na-donu-edut-v-donetsk 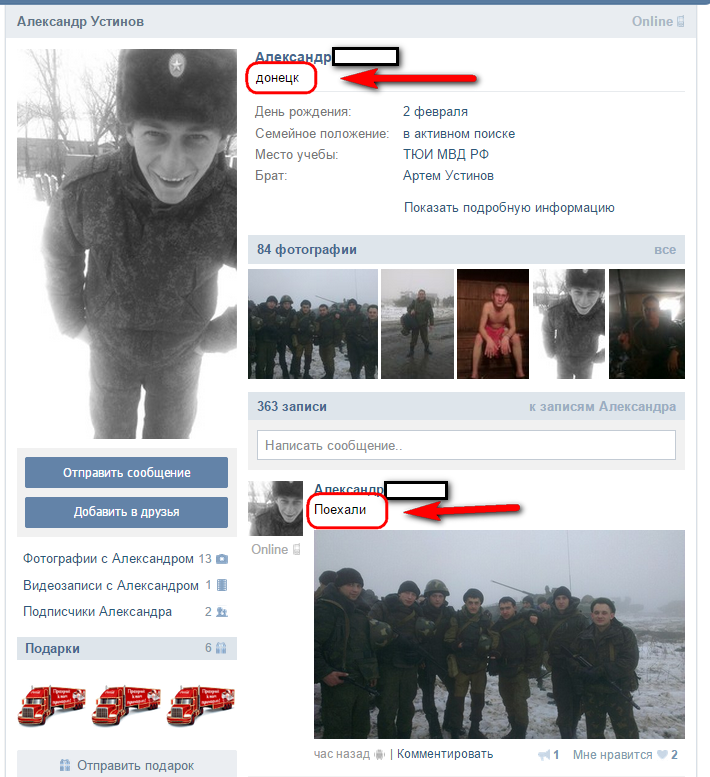 Of course, he could have meant the Russian town of Donetsk in Rostov Oblast. Aleksandr Ustinov (or maybe his superiors?) deleted his page very soon after the post, as well as pages of several of his friends.

But it is not so hard to find Russian soldiers in Rostov Oblast.

While looking through profiles of the 28th brigade’s soldiers, we also spotted photos of the dead ones. A text on this photograph says: “He was the best of the best. A dear friend. We will always remember him. He’ll remain in our hearts.” 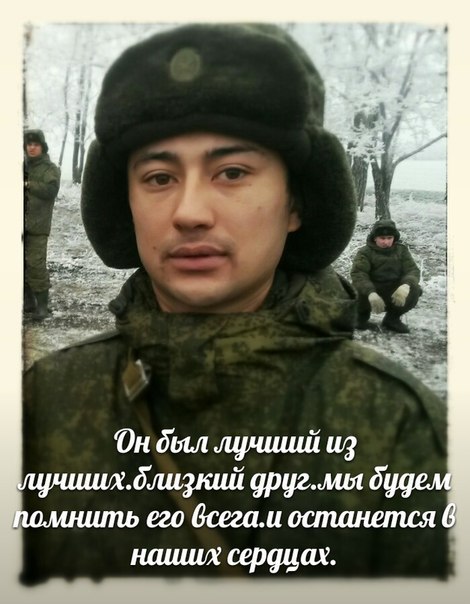 According to the pictures, almost everyone from the brigade is at the Ukrainian border.

Here is the 20 year old Irik Tuhvatullin. He has been in Rostov Oblast since October. He complains about it to his friends. 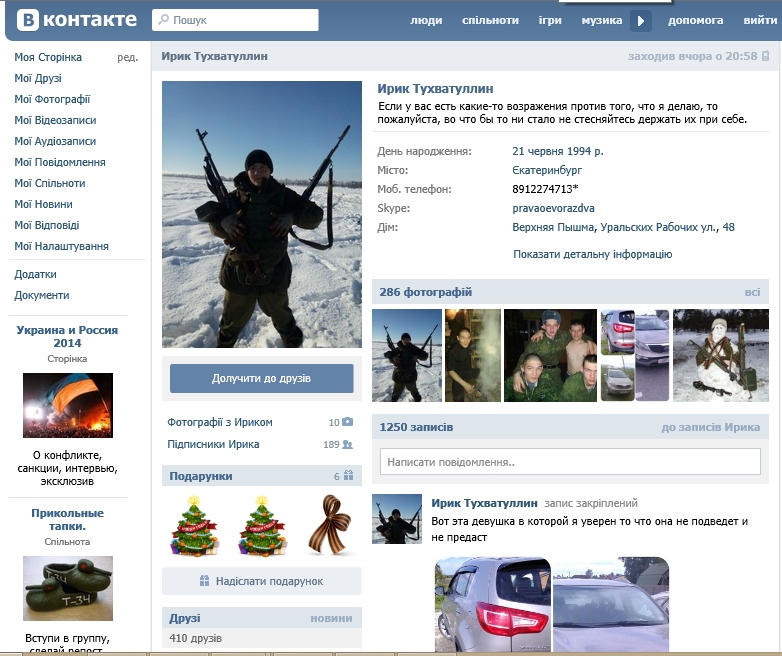 Irik is unhappy that he had to celebrate New Year in the fields. One of his comrades was buried in December. For some reason, in Rostov Oblast, they started covering the identifying numbers on the vehicles with green paint. 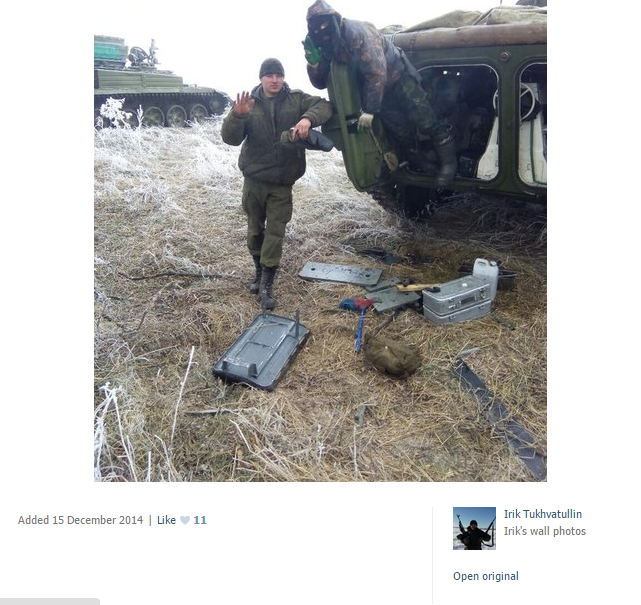 Here is Pavel Veretennikov, also from the 28th brigade: 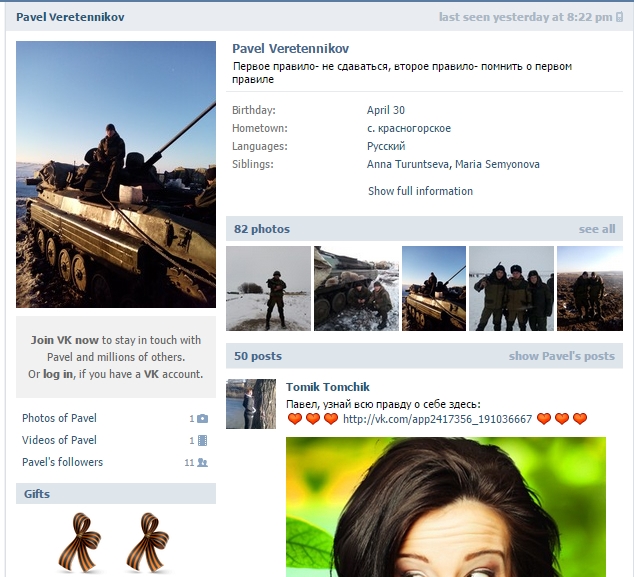 New Year in the fields of Rostov Oblast: 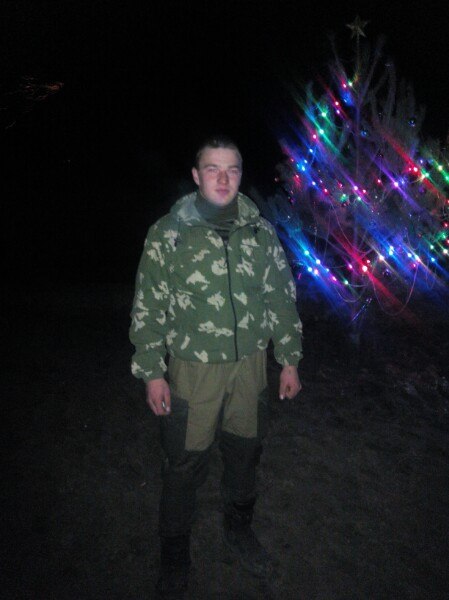 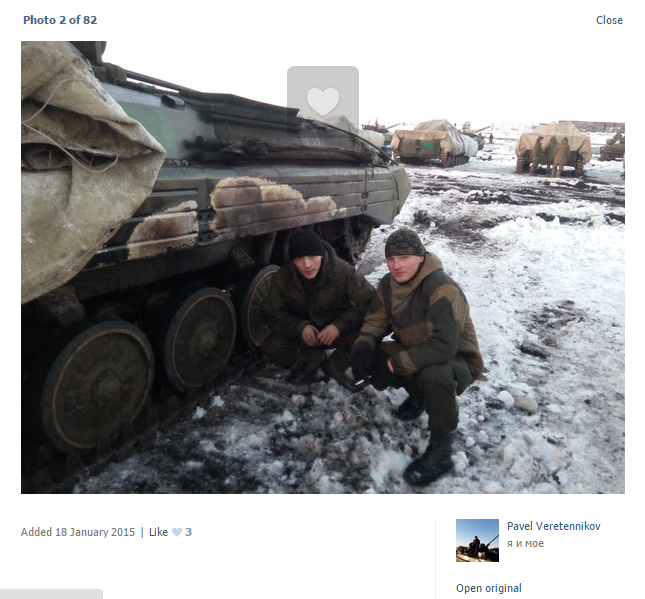 Here is Vasiliy Ketov from the 28th brigade. 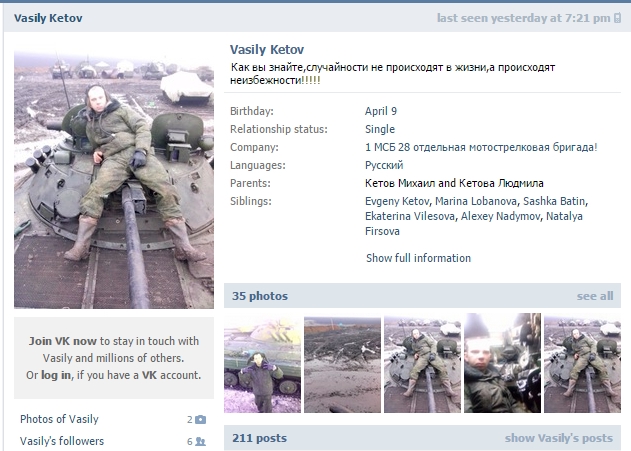 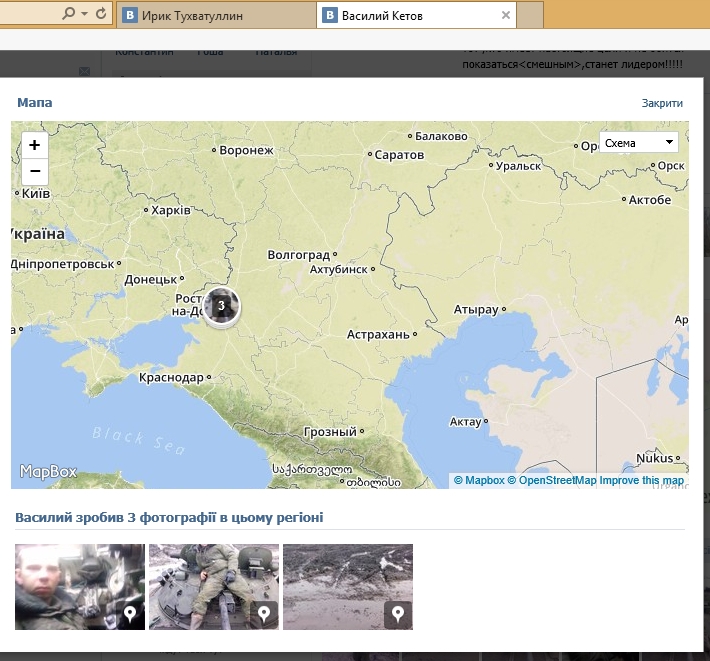 Here is Vasiliy on a vehicle with hidden numbers. Underneath, there is an unusual comment from a relative: “Oh Vasia, how are you over there? I am so sorry for you guys. You must be really scared.” That seems to be a strange reaction to a common military exercise. 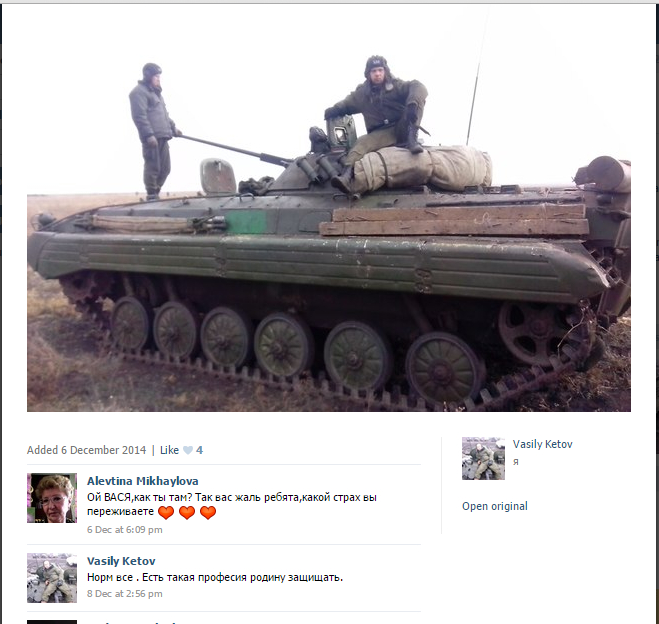 Vasiliy has been in the fields near Ukraine for several months already. 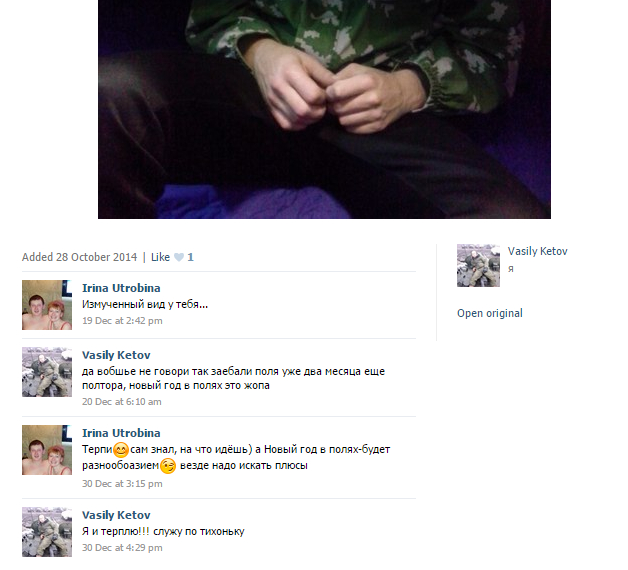 “F*cking fields, I’m so tired, it’s been two months already, one and a half more. New Year in the fields is shit”, his comment on December, 20.

And here is the 20 year old Roman Pirhanov from the 28th brigade: 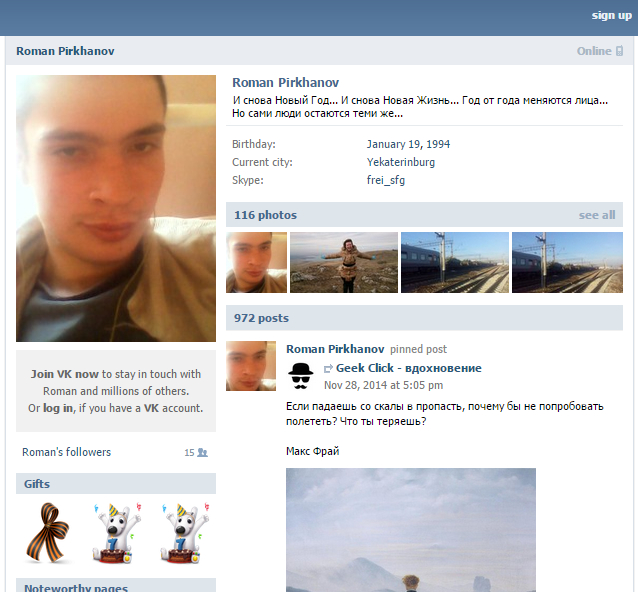 One of his pictures shows a column of the Russian vehicles near the village of Kolesnikovo  (it is just 15 km from Ukraine): 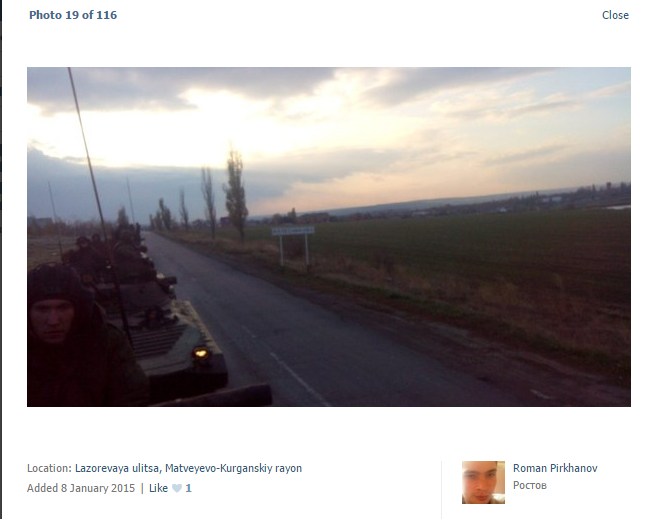 And here is a field full of vehicles with painted over numbers. 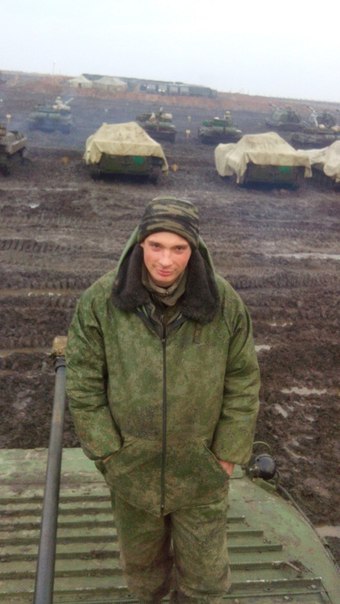 This is a picture of the 21 year old Ivan Kopylov. 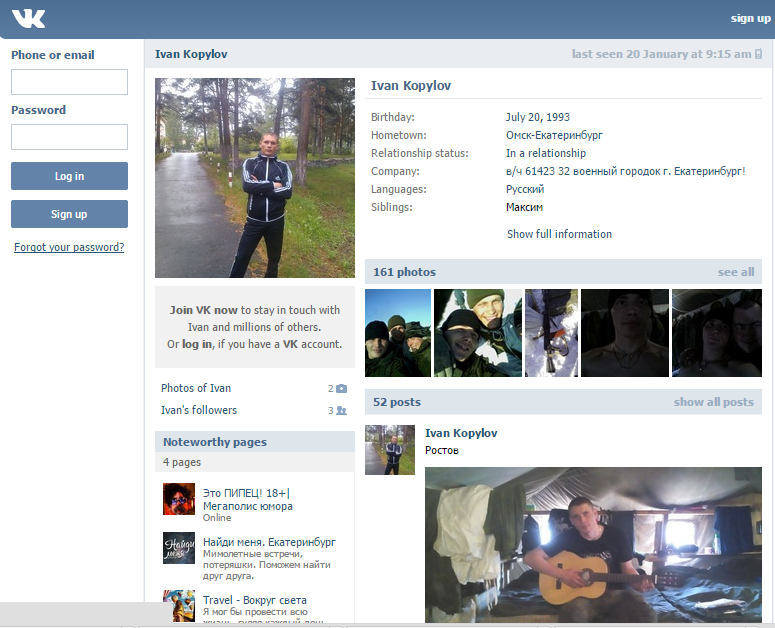 One of his pictures is of a familiar looking Russian tank with a H2200 railroad marking; similar tanks were spotted in Ukraine many times. 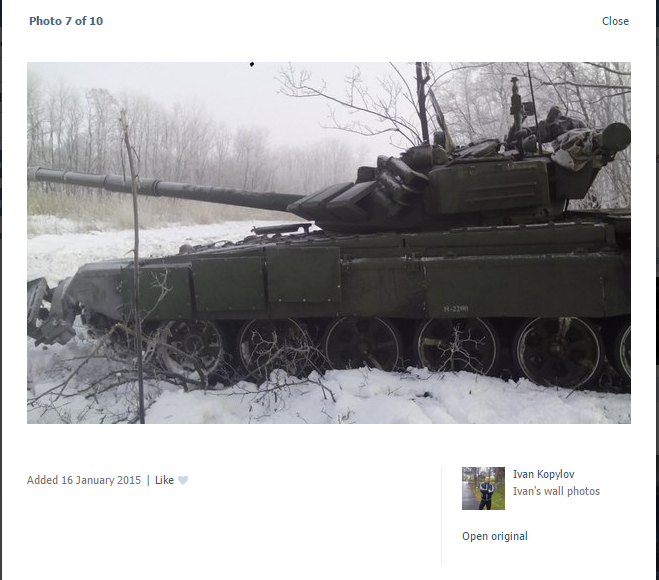 In the forests and snow, the Russian tanks from the 341st tank regiment of the 28th brigade are hiding from satellites.

Sometimes, similar tanks appear in different places on the side of the terrorists and shoot around Donetsk Airport.

Sometimes, similar MICVs  with repainted over numbers can be spotted in the terrorists videos.

It might seem strange that parents of soldiers from the 28th brigade worry about their sons, but sometimes the soldiers staying in Rostov Oblast mourn their dead comrades.