A Medal for Killing Ukrainians 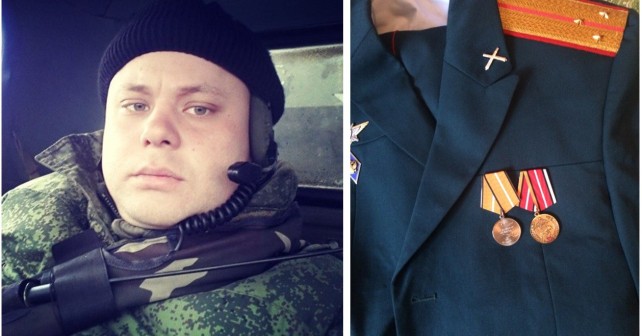 The InformNapalm international volunteer community is ready to present another fact confirming the ‘Rostov – Ukraine assignment’ maintained by a Russian military unit from Yekaterinburg (Siberia). This time a Russian officer serving at the rocket artillery division, the 28th separate motorized rifle brigade, helped us to disclose his tactical group’s non-friendly movements from steppe in the Rostov Oblast to Ukraine by uploading a picture of his medal, which was received based on the results of this ‘business trip’.

Our OSINT investigation has identified a Russian officer Rodion Zobunov from a rocket artillery division of the 28th brigade (military unit No. 61423, Yekaterinburg, Central Military District). 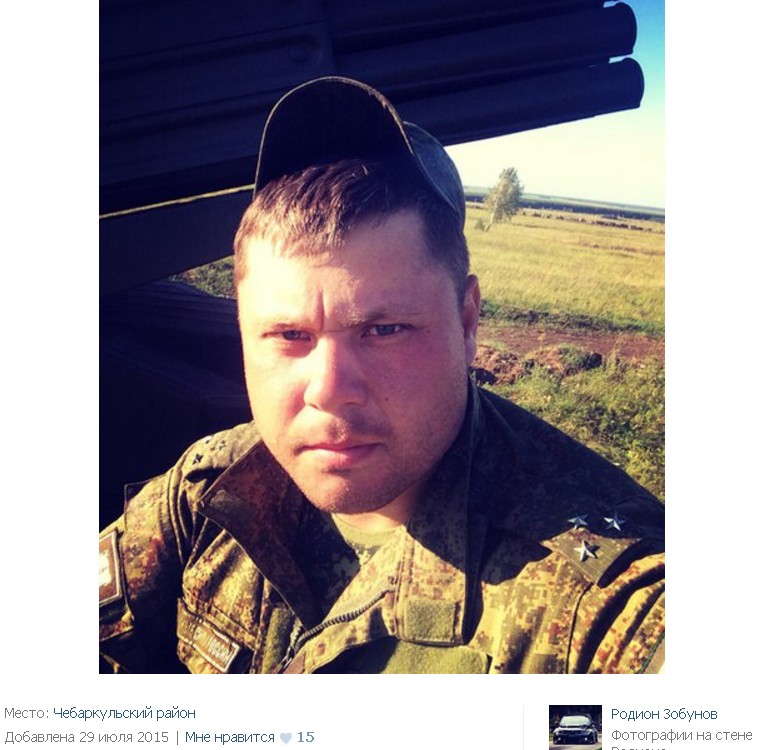 While researching Rodion Zobunov’s profile we paid attention to the following interesting fact: after multiple ‘Rostov military trainings’, which included usage of the ‘Grad’ systems, this Russian artillery officer was awarded a medal ‘For Distinction in Combat’. It is important to mention that this medal can be awarded for the military actions only.

Reading from the award list to the senior lieutenant Rodion Zobunov’s medal ‘For Distinction in Combat’: a medal No. 5741 awarded based on the Ministry of Defense Order No. 591 dated August 6, 2015, signed by Lieutenant Colonel D. Baranov, Acting Head of the Staff of a military unit No. 61423. A geotag under the photo of this medal also looks interesting: Simferopolskaya str., Yekaterinburg – this is exactly where the 32nd military town and 28th brigade are located. Archives: 1, 2. 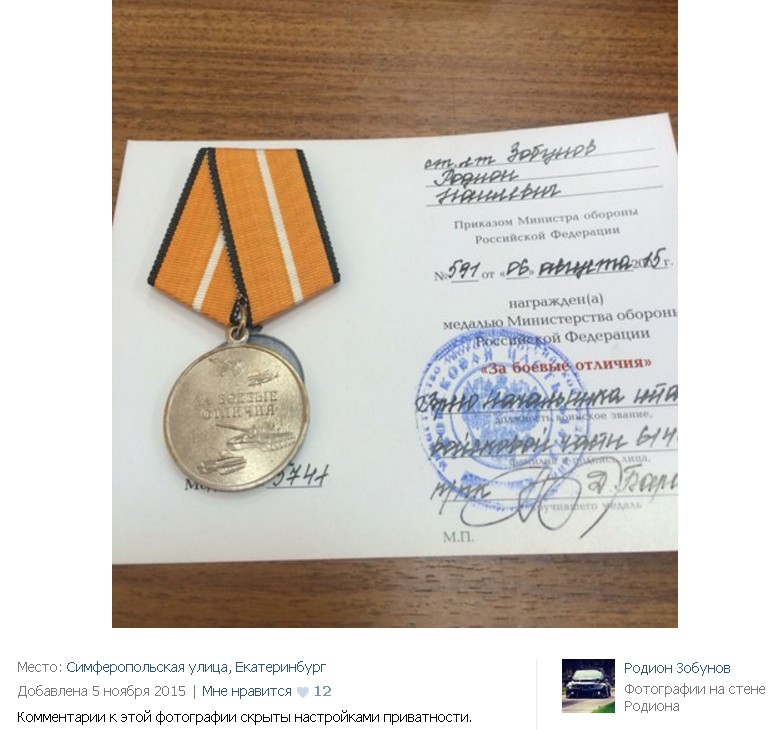 ­This award is not one, which is given here and there like a medal ‘For the Return of Crimea’. This medal is definitely not awarded for some ordinary military trainings. This is a pretty rare and significant award. Initially it was frequently given for the military operations in Chechnya and later in Georgia; the third wave of its awarding can be identified as the Ukrainian campaign – so, this is an award for the Russian military representatives for killing the Ukrainians.

Note: Medal ‘For Distinction in Combat’ is one of the Russian Ministry of Defense awards for the Russian army. It is given:

Despite Rodion Zobunov was smart enough to not place too much information to his uploaded photo (i.e. geotags or easily recognizable places & objects) allowing to understand that they were made in Ukraine sometime between December 2014 and March 2015 (it was a pinnacle of the military actions), he uploaded pictures showing the bordering ‘military trainings’. No insignia or vehicle registration plates are visible except the usual-for-the-irregular-volunteer troops red star. Chevrons or insignia are not visible on the pictures where Russian soldiers from the rocket artillery division; other pictures show people who wear non-uniform clothes ‘Gorka’. Please see archives of the ‘1st business trip’ dated December 2014 – March 2015: 1, 2, 3, 4, 5, 6, 7. The last picture shows Myasnikovskiy district, Rostov region signed with the words ‘Heading home’. 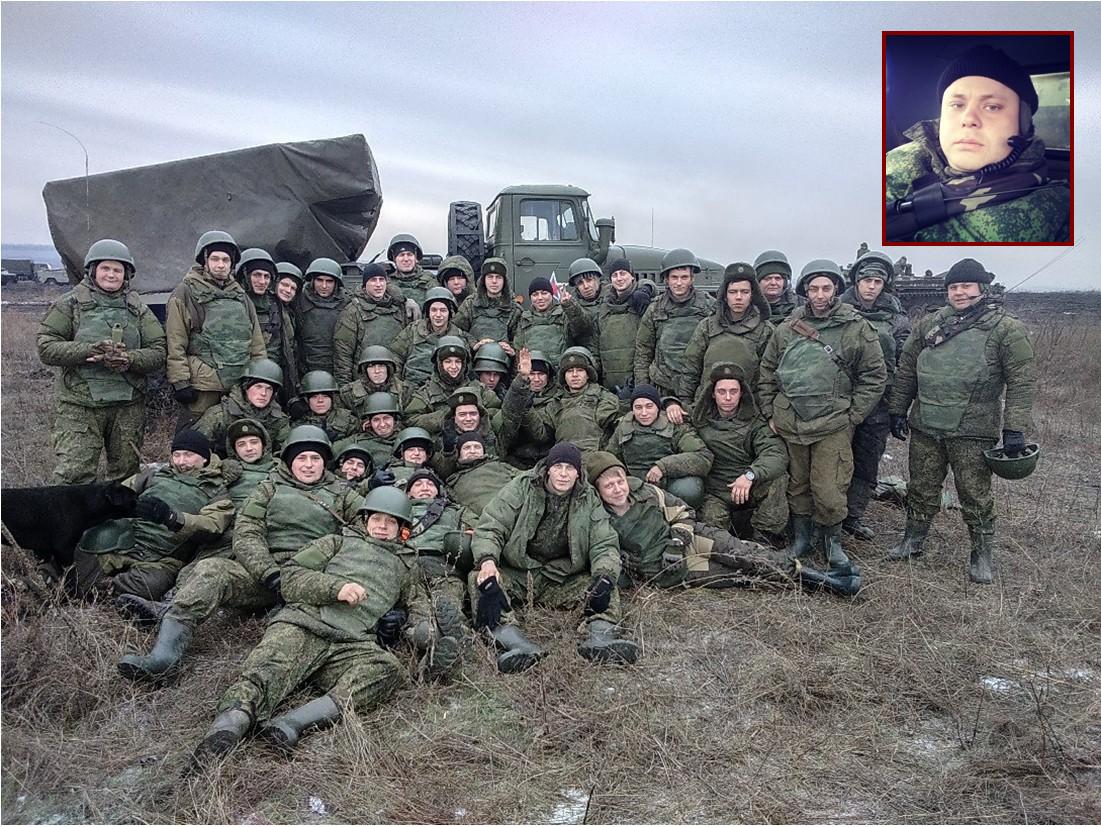 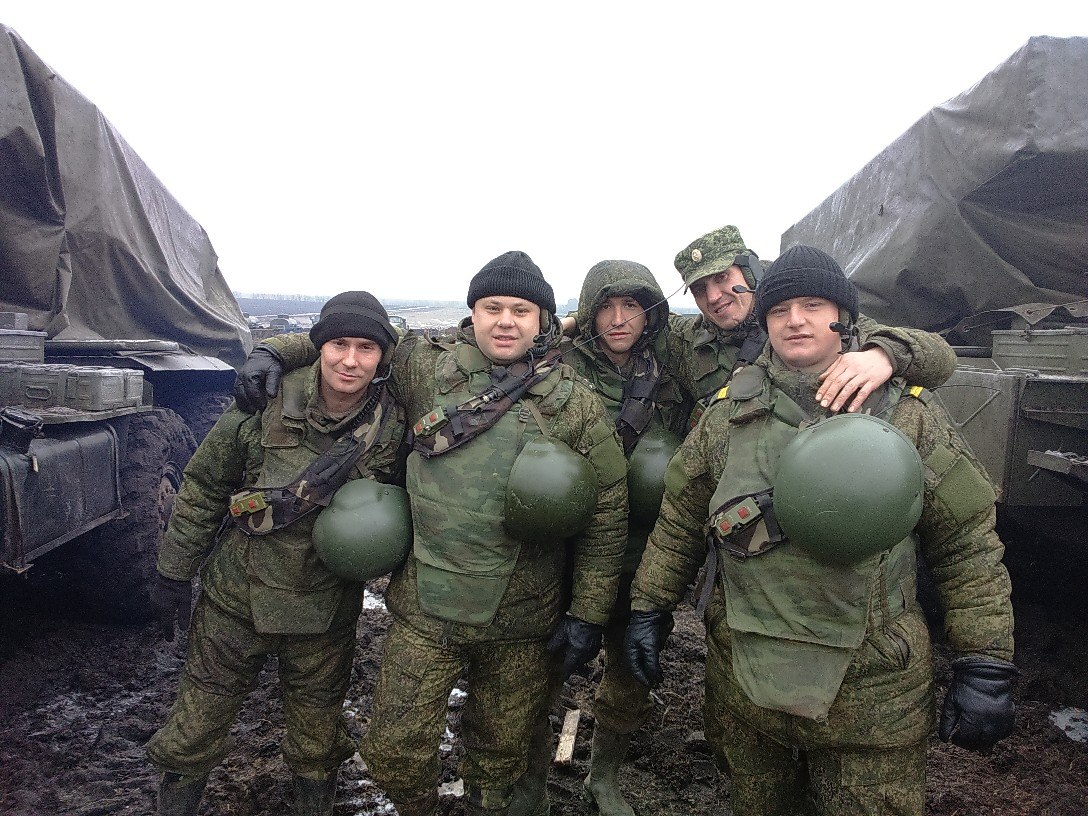 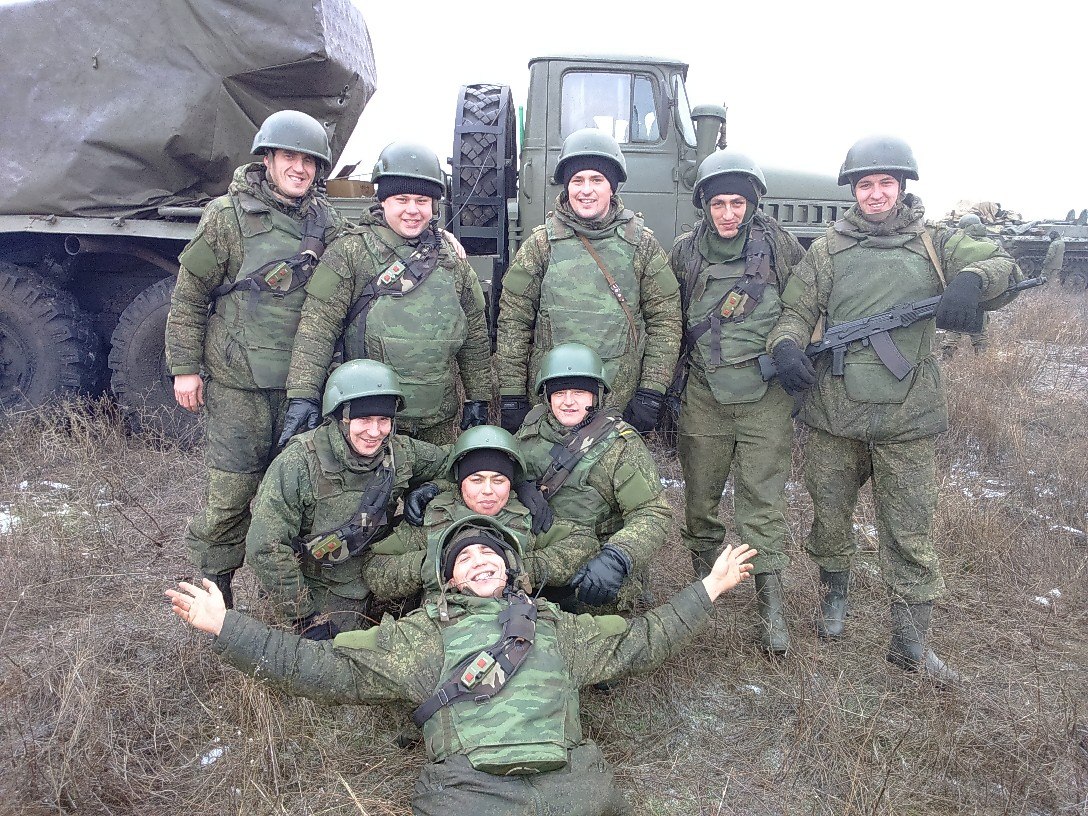 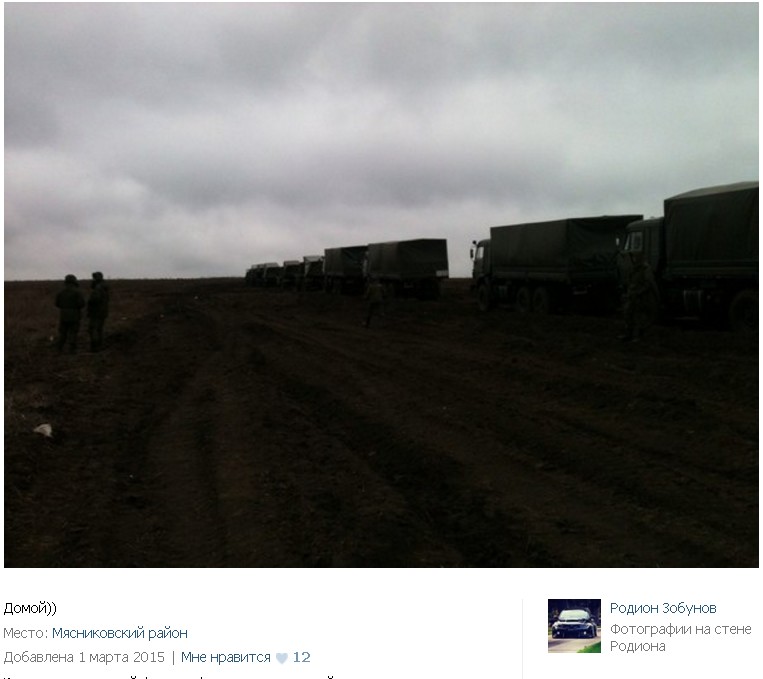 We have also identified pictures made in the Russian regions bordering with Ukraine – Myasnikovskiy and Matveyevo-Kurganskiy raions of Rostov Oblast – where people wear a summer uniform, which proves the 2nd ‘business trip’. These pictures have been added in the summer – Fall 2015. Archives: 1, 2, 3. 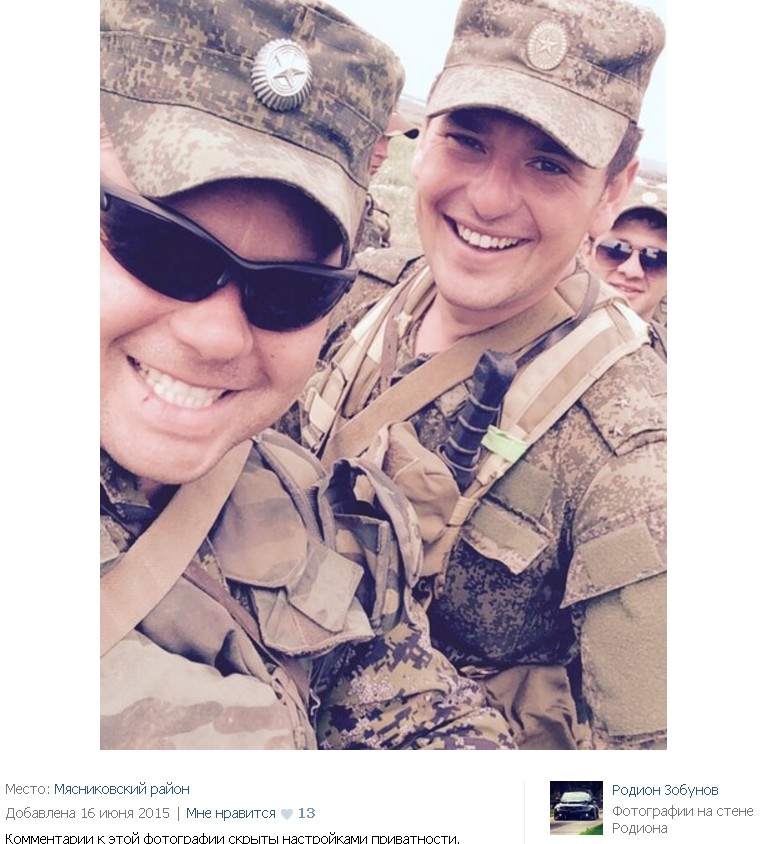 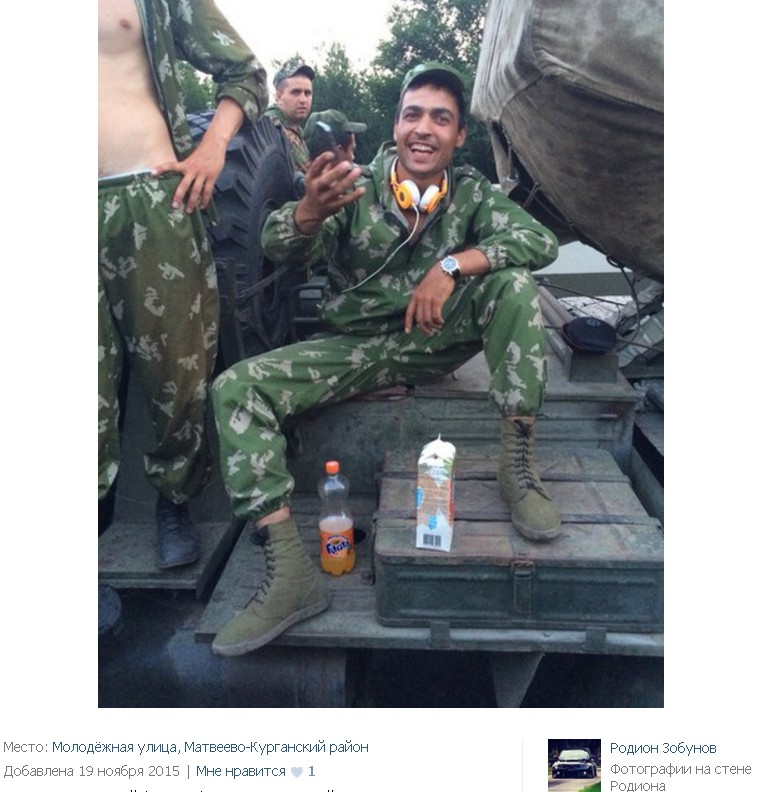 Time and again we watch how the Russian army use ‘Grad’ launchers and other rocket artillery weapons against Ukraine. Pretty often firing were maintained using a so-called nomadic tactics – when the mobile rocket systems fire from the Rostov Oblast (on the border with Ukraine) towards Ukraine or move temporarily to the Ukrainian territories to fire and return back to Russia. All of this had been described earlier in our articles covering the Russian rocket artillery, which took part in the military actions against Ukraine: the 200th brigade (military unit No. 08275, located in Pechenga, Murmansk Oblast, the 7th military base (military unit No. 09332, located in Gudauta, occupied territory of Abkhazia, Georgia), the 291st artillery brigade (military unit No. 64670, located in stanitsa Troitskaya, Ingushetia, Northern Caucasus of Russia).

Taking into account all the information above, it is hard to believe that the detachment commander got a military medal for taking part in common training activities, and that the officer travelled 1700 km just to launch several ‘Grad’ missiles over the border with Ukraine.

It is necessary to stress that the above mentioned 28th brigade from Yekaterinburg has been mentioned in our materials in regards to the ‘Rostov-Ukraine business trips’ (near the Ukrainian border as well as in Ukraine: Donetsk, Stakhanov, Bryanka, etc). From November of 2015 its divisions have been seen taking part in the ‘Novorossiya-Syria business trips’. The appropriate links are below:

The 28th brigade in Ukraine:

The 28th brigade in Syria:

One Response to “A Medal for Killing Ukrainians”