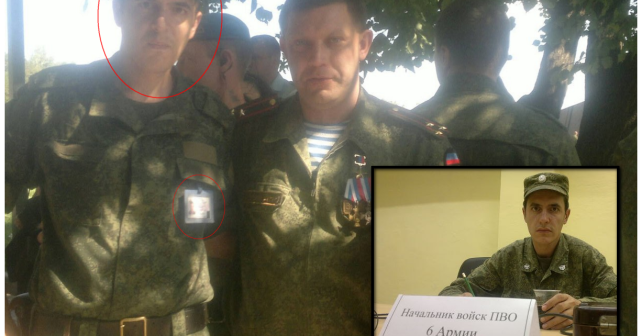 Informnapalm.org team made another investigation on the identification of the Russian soldiers fighting in Donbas.

This time we found Ruslan Mirpochayev, a serviceman from the 200th separate motorized rifle brigade within the Special Forces of the North Fleet of the Russian Federation. This brigade is located in the settlement of Pechenga, Murmansk Oblast, military unit No. 08275.

The study of his profile was made according to a standard ‘2 handshakes’ scheme and it gave us good results in discovery and referencing the obtained information.

Ruslan Mirpochayev born in St. Petersburg is a military serviceman of the 200th special forces brigade, has a model-looking wife Alyona Miro and a son. Ruslan takes part in the military mortgage system that provides housing to the servicemen of the Russian Army. Any mortgage is a burden for decades meaning Ruslan Mirpochayev must constantly remain on the service of the Russian Federation Army. This is confirmed by the post on the site of the Russian mortgage system: ‘… how much do I have on my account if I studied 5 years at military school and served 7 years after graduation. Married, 1 child’’. In old Ruslan’s profile the ‘military service’ line has ‘military unit No. 08275 since 2006’ value, which matches with the ‘served for 7 years’ post from 2013.

The military school mentioned in the post is ‘Military Academy of Air Defense of the Russian Federation Army‘ (‘VA VPVO VS RF’ abbreviation in Russian). The same abbreviation is frequently seen in his friends‘ profiles. 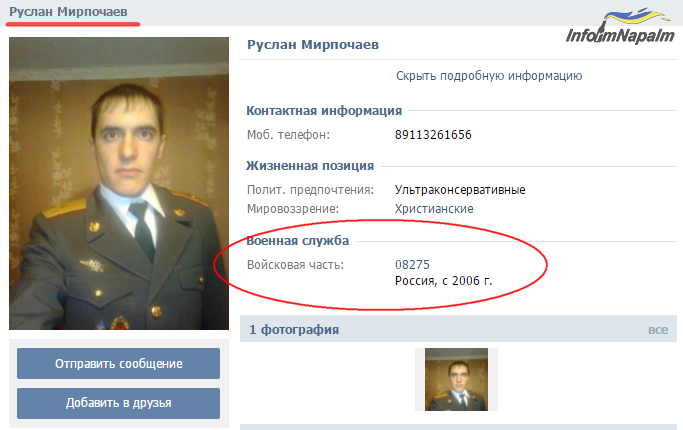 Ruslan Mirpochayev’s belonging to the air defense is also confirmed by a suggestive comment from his friend in the picture with ‘Lastochkino gnezdo’ ([‘Swallow nest’ palace] ) in Crimea in the background. “By the way, there was an air defense force’s sanatorium in Soviet times near the place where I lived in Yevpatoriya” 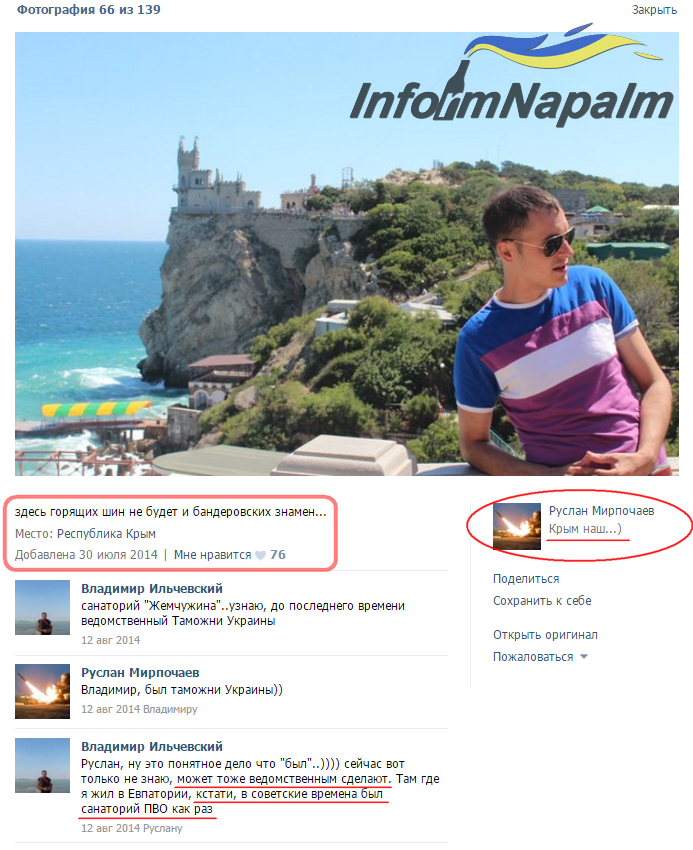 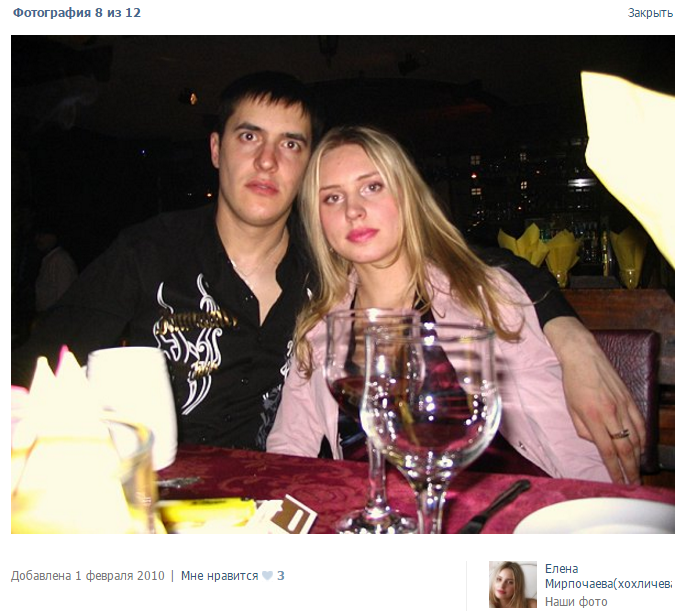 Here is another picture (signed ‘Service’) of Ruslan with his young girlfriend (19 years) from Donbas who was born in Slovyansk and most probably serves in Donbas Corps (DC) of the Russian occupation army. 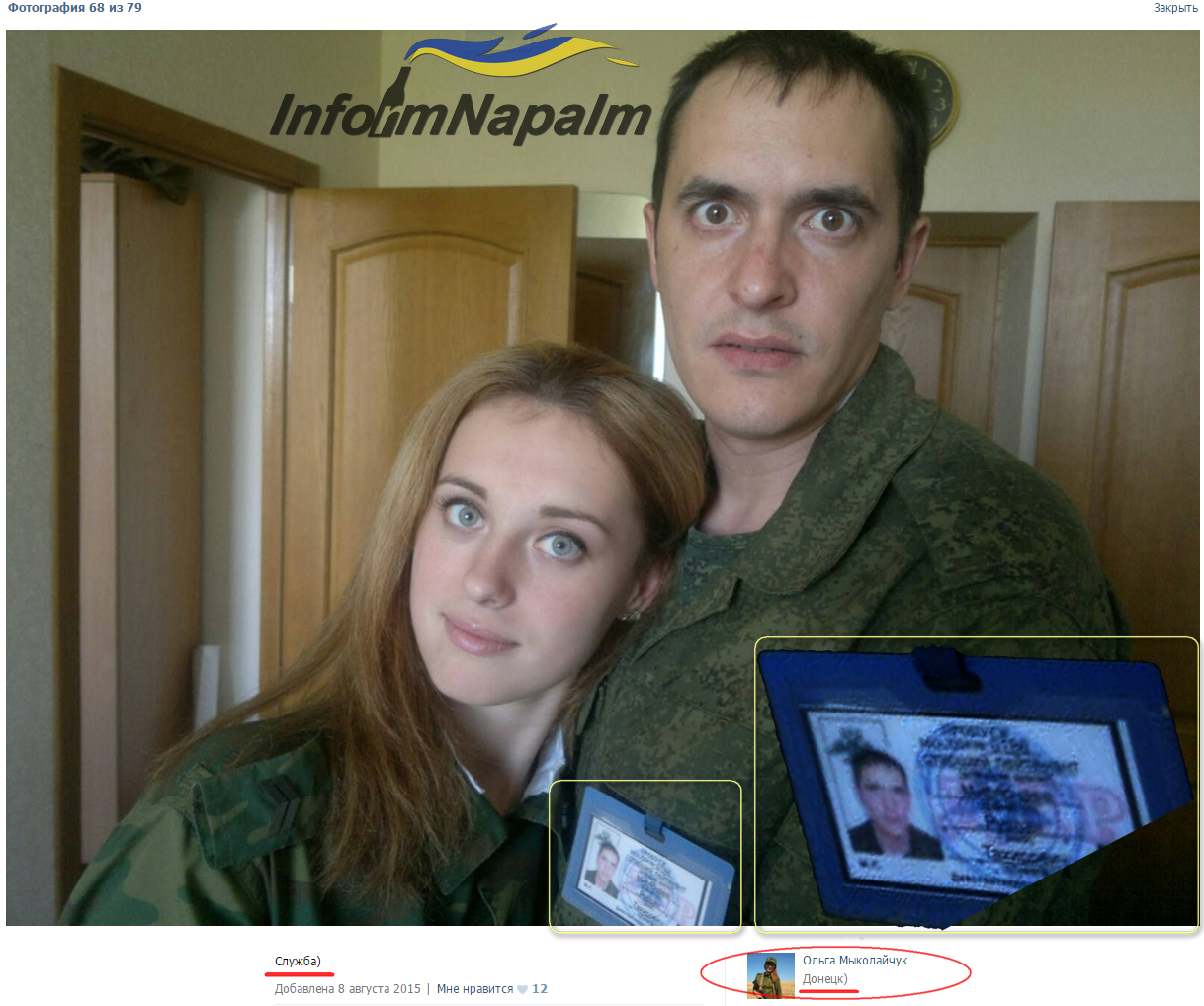 Moving on the topic of Ruslan Mirpochayev’s ‘service’ in Donbas, let’s look at his picture with ‘cats’ and his confession that he is an ‘occupant’. 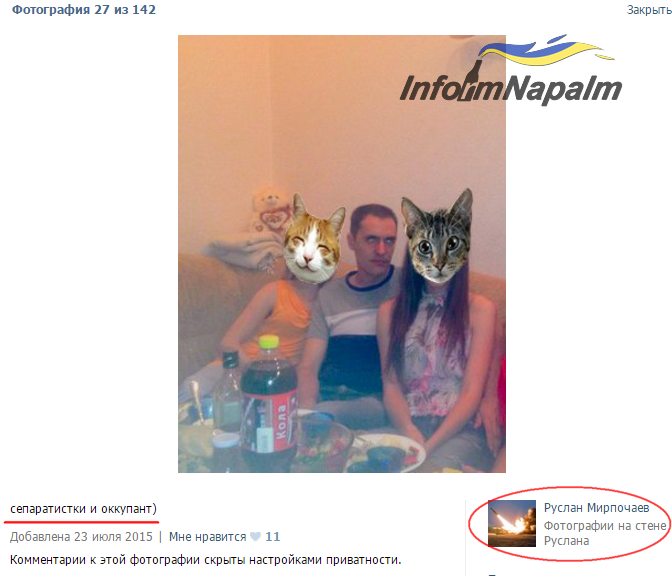 Sincere confessions by the serviceman of the Russian Federation Army run on.

In one of his dialogs on the net, Ruslan Mirpochayev tells that “I had to fight ONLY for DNR…” 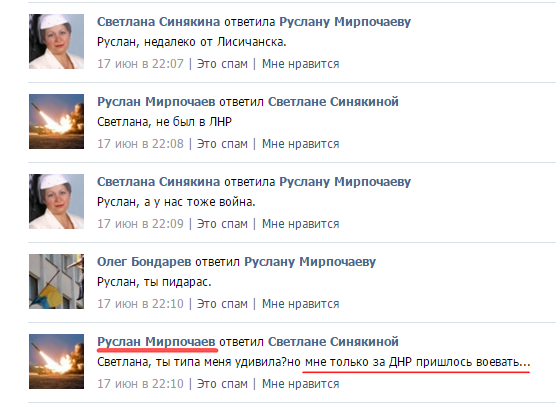 One more confession about the “territories temporarily occupied by Ukraine”. Yes, just like that, exactly ‘by UKRAINE‘!

These confessions by Ruslan in the conversation with a 15-year old girl can be read on this link. By the way, this girl with separatist views from Donetsk now rests in the town of Mykolaivka located near Slovyansk. 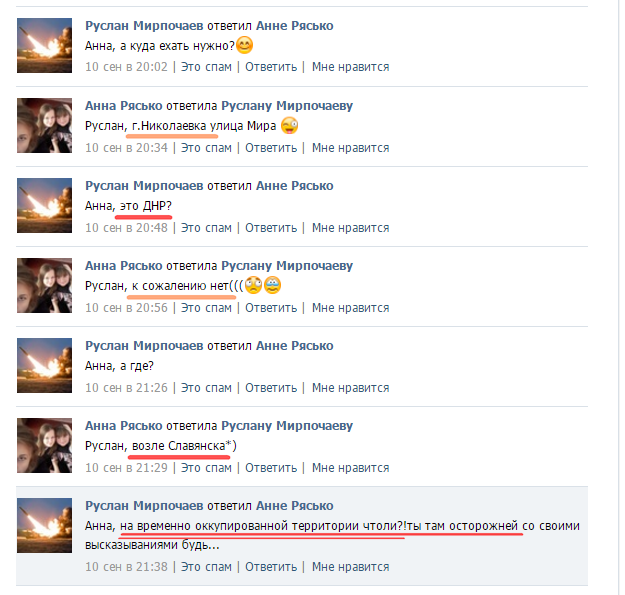 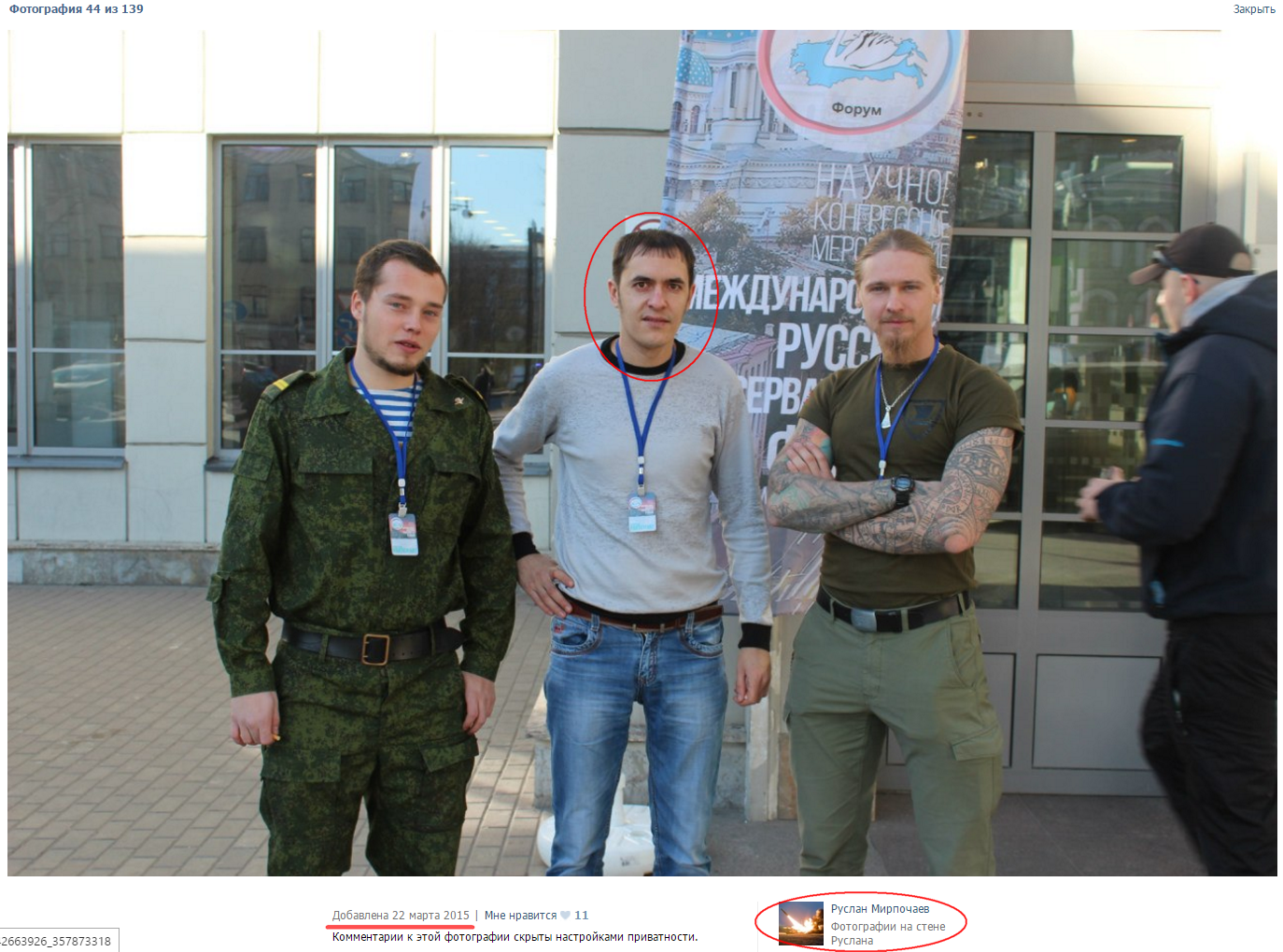 Here is a picture of military serviceman Ruslan Mirpochayev in civilian clothing and neo-Nazi Aleksey Milchakov in someone’s apartment. 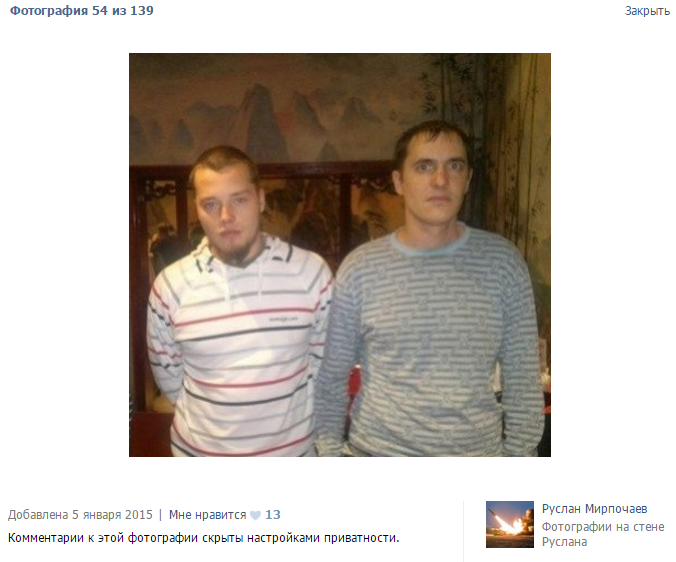 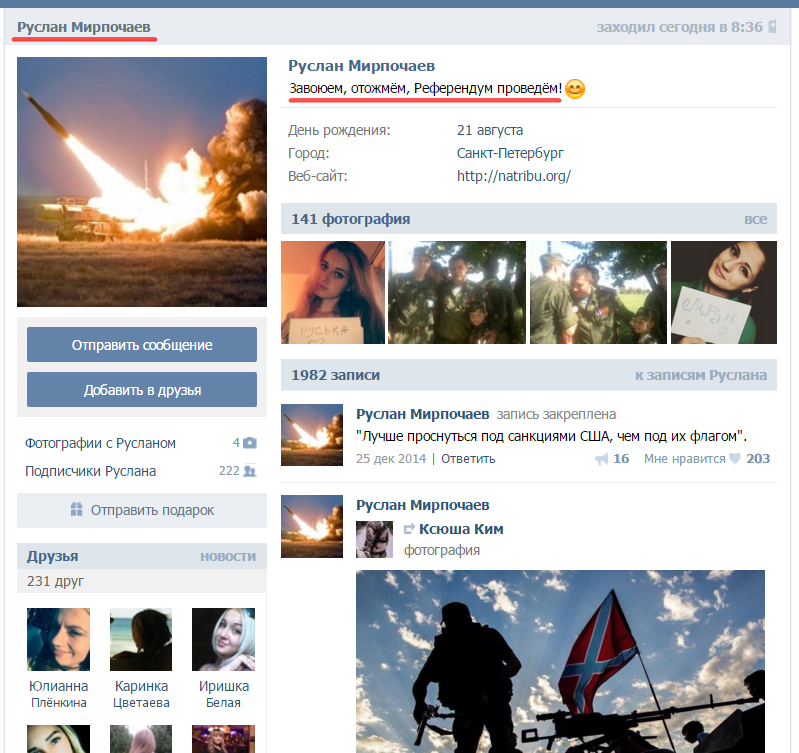 Pay attention to the fact that the actual profile of Ruslan Mirpochayev has an interesting status “Conquer, take away, and hold a referendum!” This is a line from refrain of a popular hit from Kharkiv about the orthodox fascism with the title ‘Here baby is Russism!’ The same status has profile of his comrade who also takes part in the war in Donbas, let’s talk about it later.

Here is that refrain from the song:

We see that this song is also popular among the representatives of the ‘Russian peace/world’ and it reflects their entire entity.

Here are some more pictures from St. Petersburg where Ruslan takes part in different rallies ‘In favor of Novorossiya’. Most probably, taking a leave after Donbas figths, he takes part in paid rallies to pay his debts. Why not, he has a mortgage. Either ‘triple salaries’ are not much enough so he needs additional income from paid rallies or he has loads of debts? 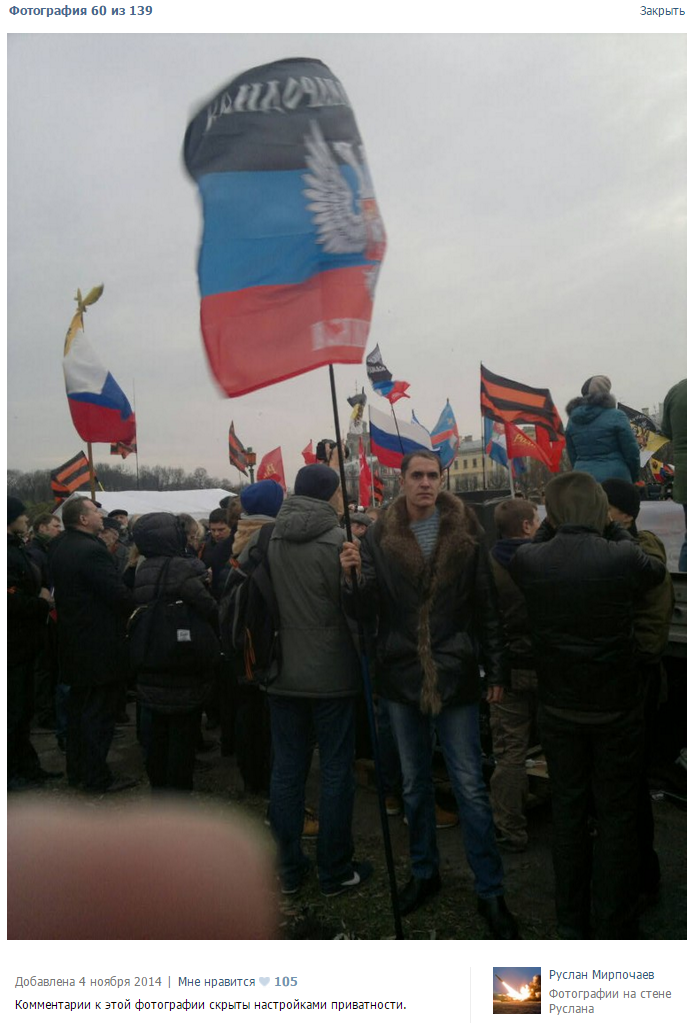 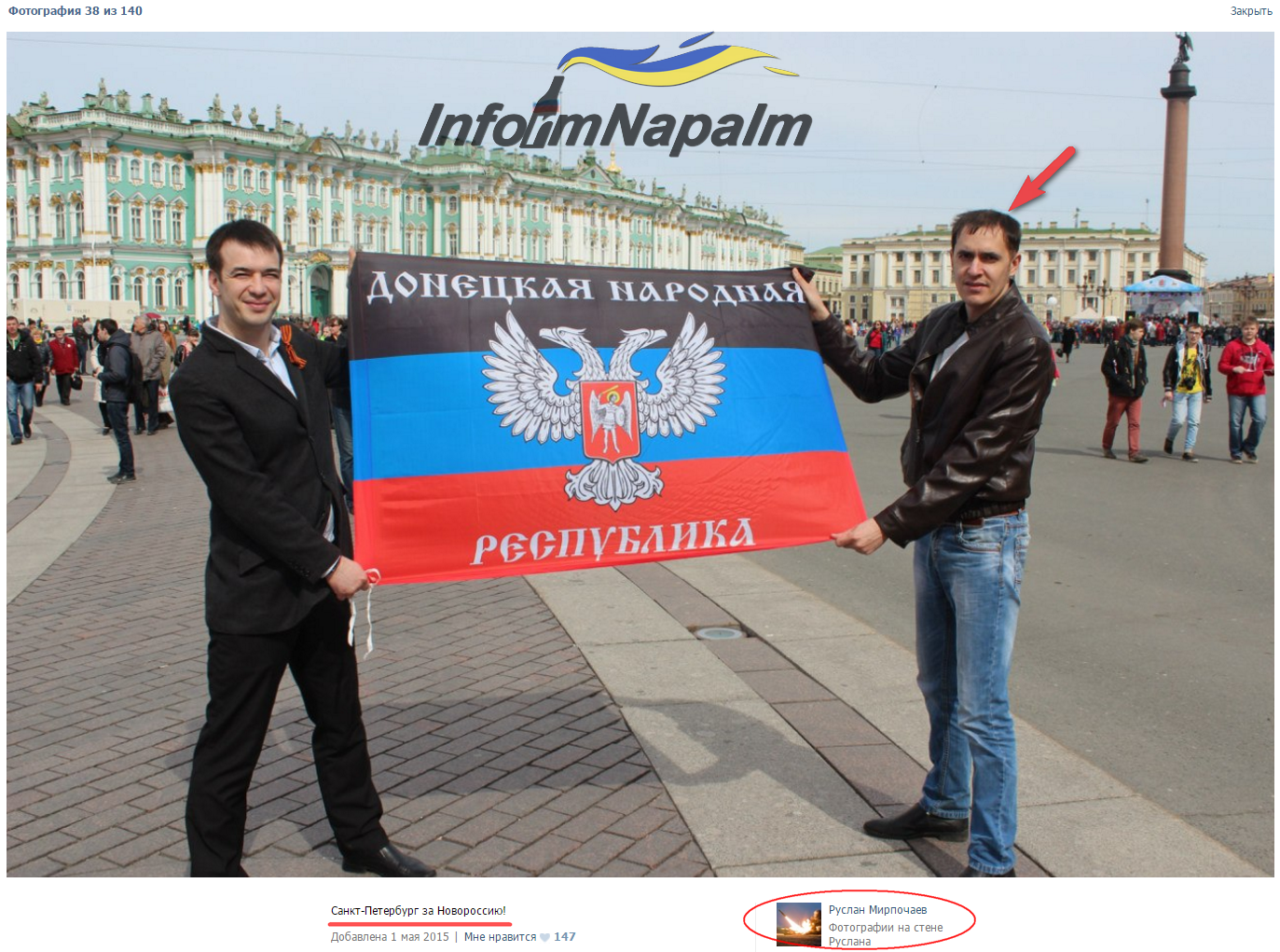 Some Ruslan Mirpochayev pictures from 2012 up to this date showing that he is actual serviceman of the Russian Federation Army. 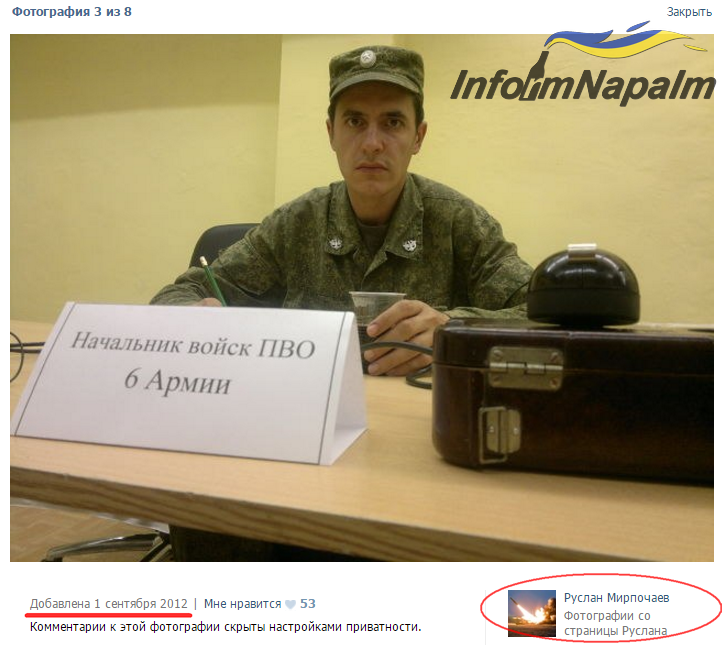 The picture in front of stela at the entrance to Debaltseve ‘freed by Russian world’ is deleted from his profile already, but the Internet remembers a lot. 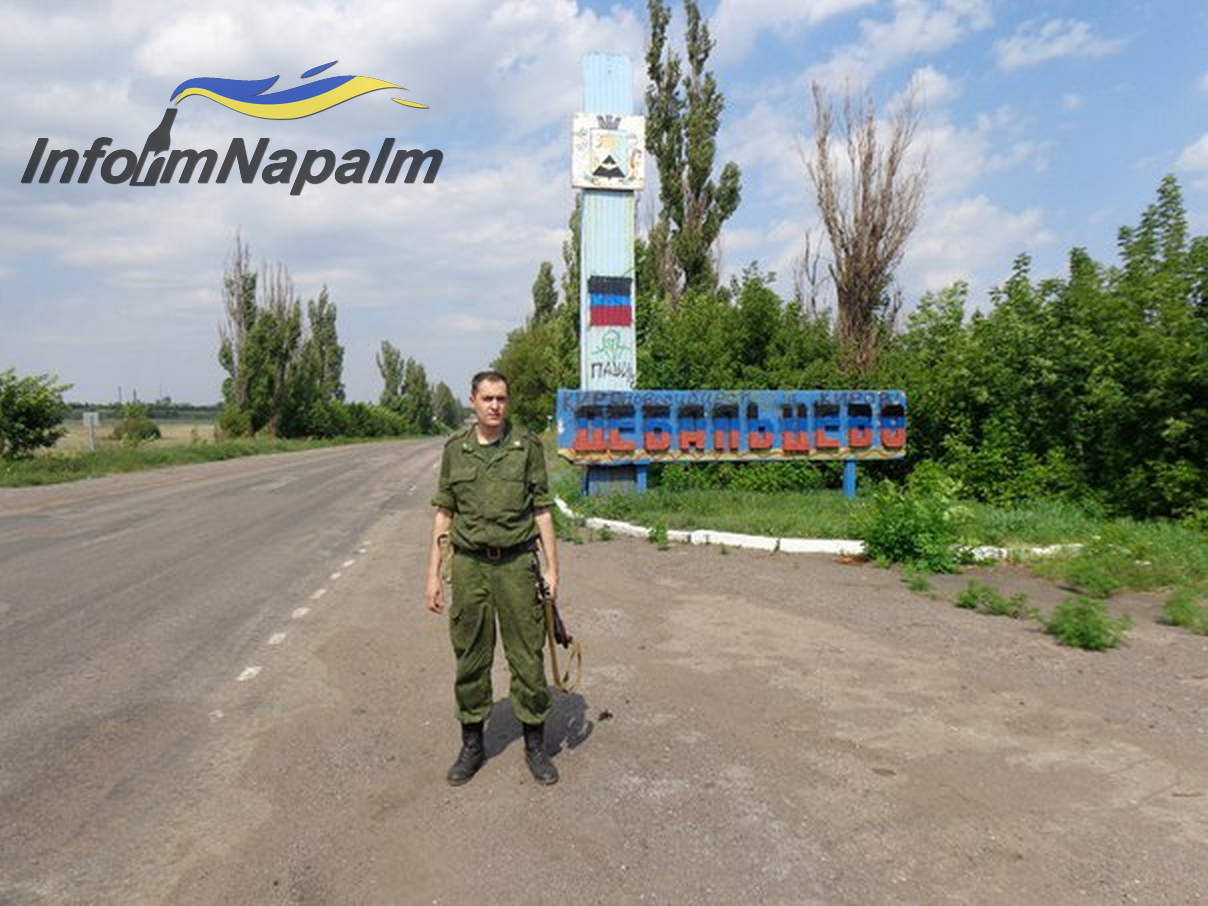 Similar picture has his brother-in-arms Aleksey Kobelev from Donbas Corps (DC) of the Russian occupation army. These pictures were taken on different days, but the same part of the year. 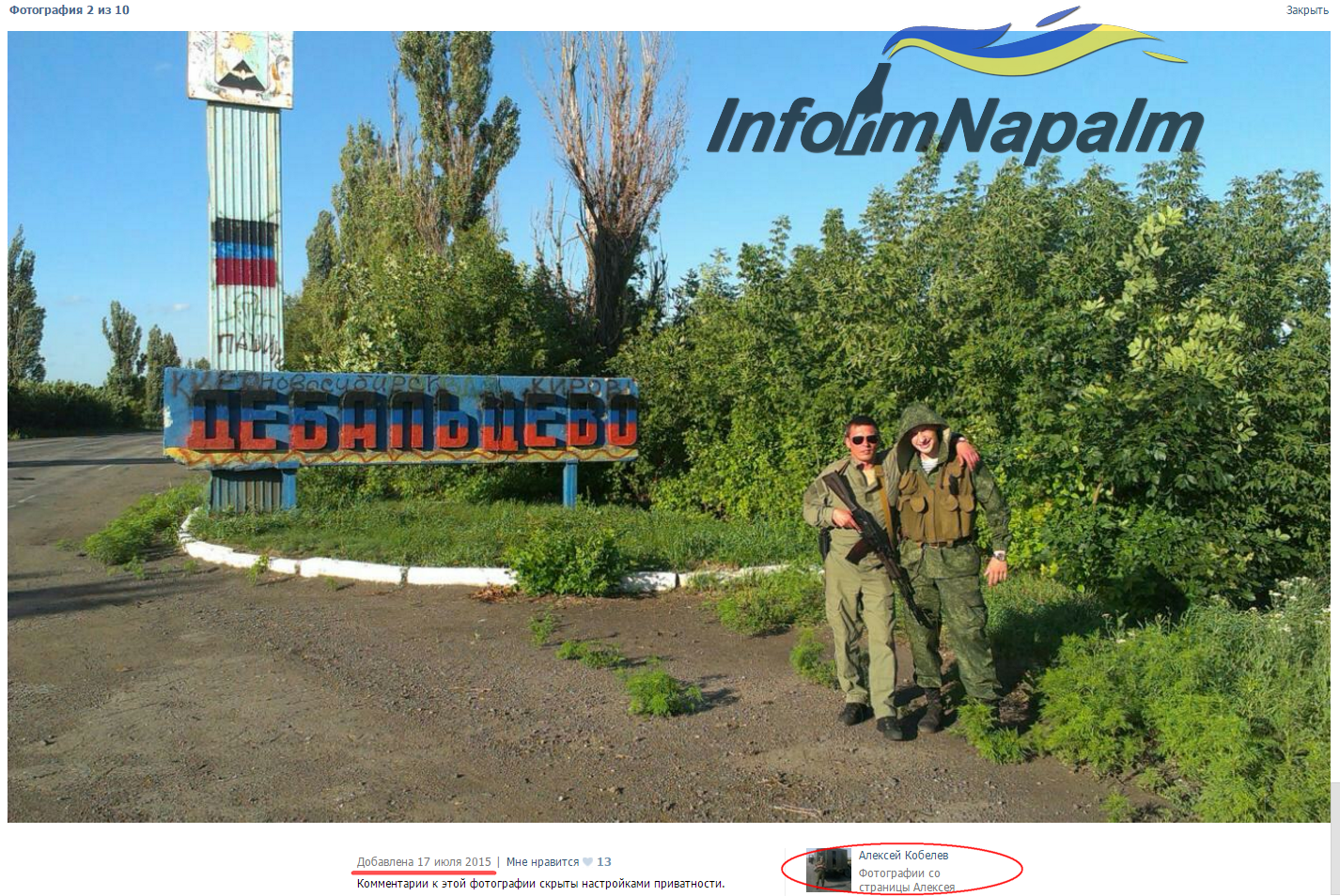 Pictures of Ruslan Mirpochayev and Aleksey Kobelev with R-142N commander vehicle in background are taken at the same place. Electricity pylons of overhead power line and a cross seen on the rim of the road are the same on both pictures. 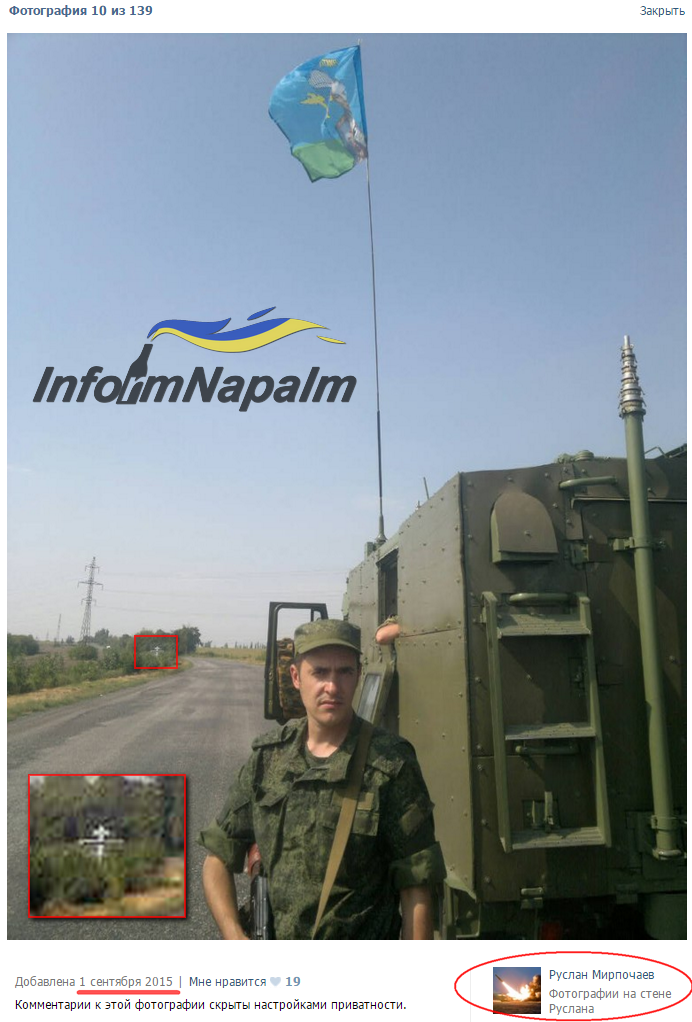 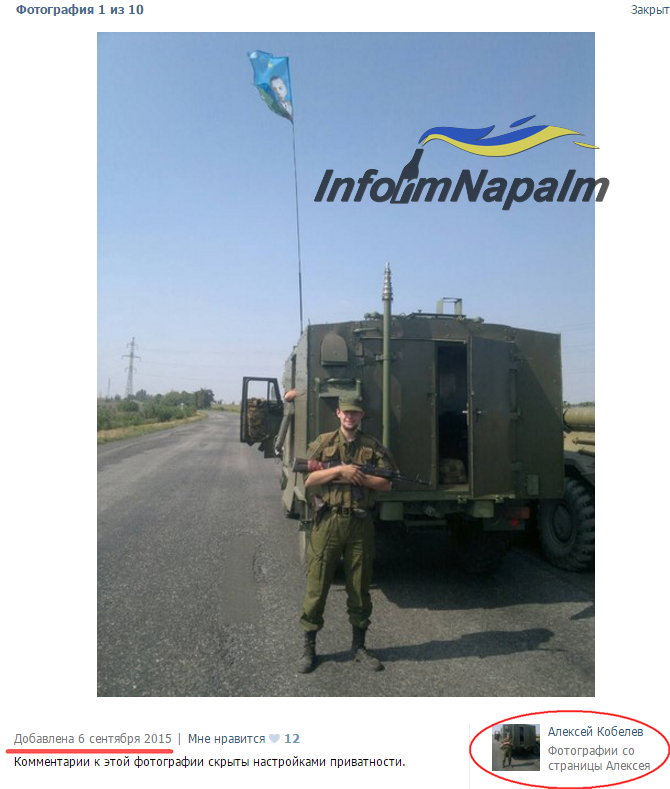 Speaking about Aleksey Kobelev, let’s recall his interesting status “Conquer, take away, and hold a referendum!” that has his profile as well as Ruslan Mirpochayev’s, mentioned above. 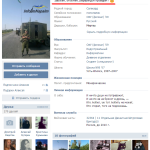 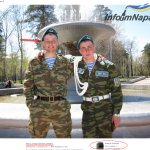 There was an interesting reaction by Ruslan to the sms he received with congratulation on the Independence Day of Ukraine. Such sms messages were received by people who were in the territory of Ukraine on August 24, 2015. This congratulation was NOT from the people in power, but from the citizens of Ukraine, volunteers to be exact. Again volunteers, how would you cope without us? 🙂 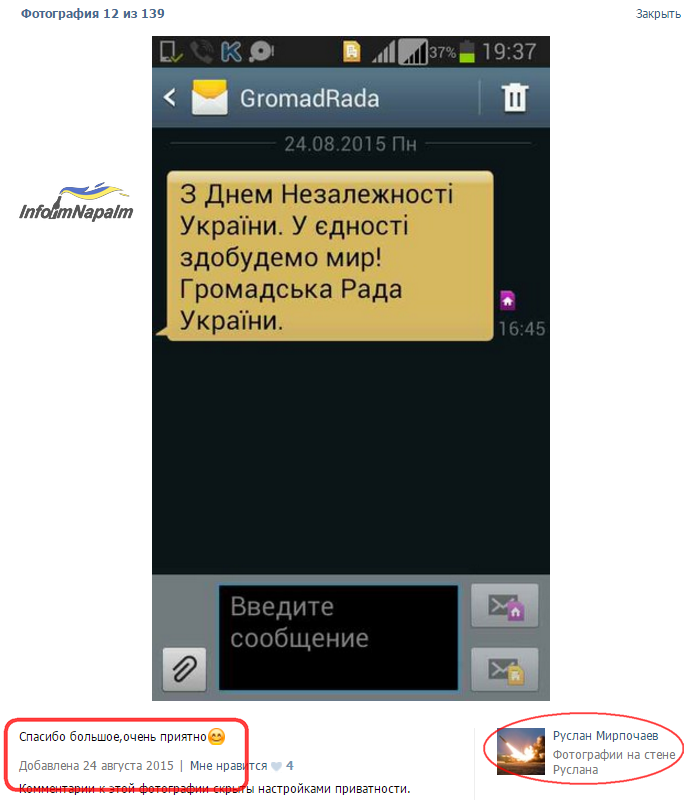 So, Ruslan Mirpochayev desires world fame and he eagerly takes pictures as he says “With the Commander-in-chief of Donetsk People’s Republic Armed Forces Zakharchenko A. V.”

Get it. We are not greedy.

Let’s remind all the actual servicemen of the Russian Federation Armed Forces and also militants of Luhansk and Donetsk corps of the Russian occupation army taking part in the war in Donbas who passed thru the ‘military assignment to Ukraine’ and who desires the world fame! All your pictures and videos about participation in the war in Ukraine should be sent to Informnapalm.org team. All our contact information can be found on the site in the ‘About us’ chapter. You will get a pleasant and friendly communication with the volunteers of Informnapalm.org team. 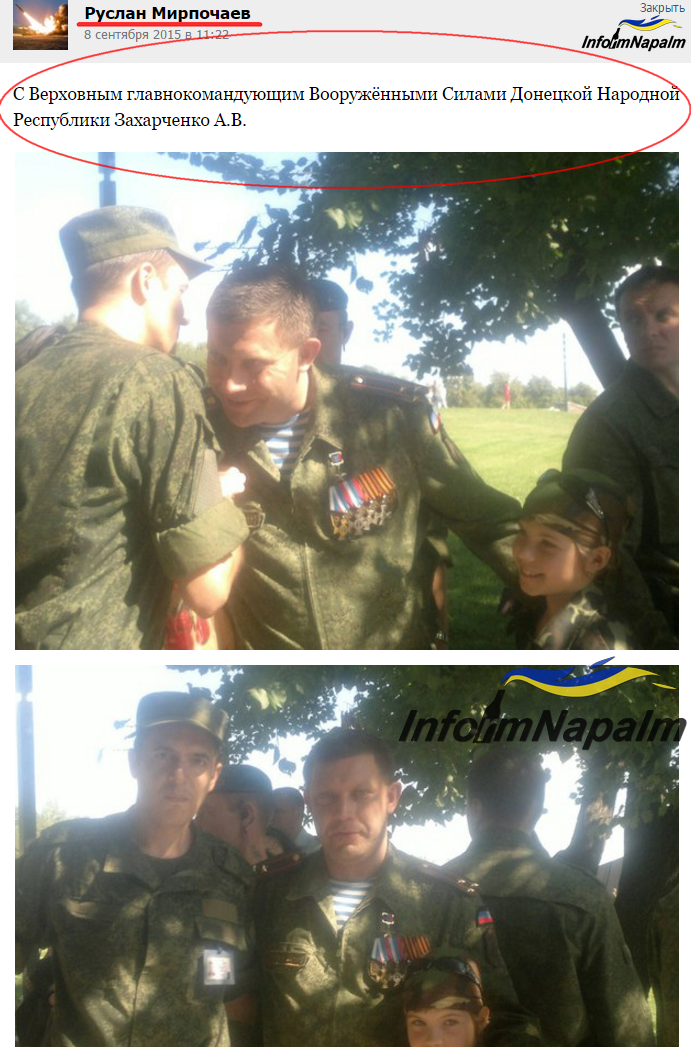 Lavr Lavrov from the Donbas Corps of the Russian occupation army is another friend from the list.

R-142N commander vehicle, the same as on the photo of Ruslan Mirpochayev and Aleksey Kobelev, is seen on this picture. The geotag of this picture is: Komsomolkoye, Starobeshiv raion, Donetsk Oblast. 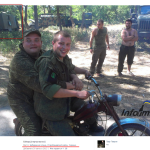 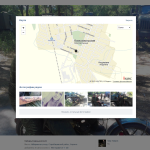 A group picture of both Ruslan Mirpochayev and Lavr Lavrov together with other militants of the Russian occupation army. 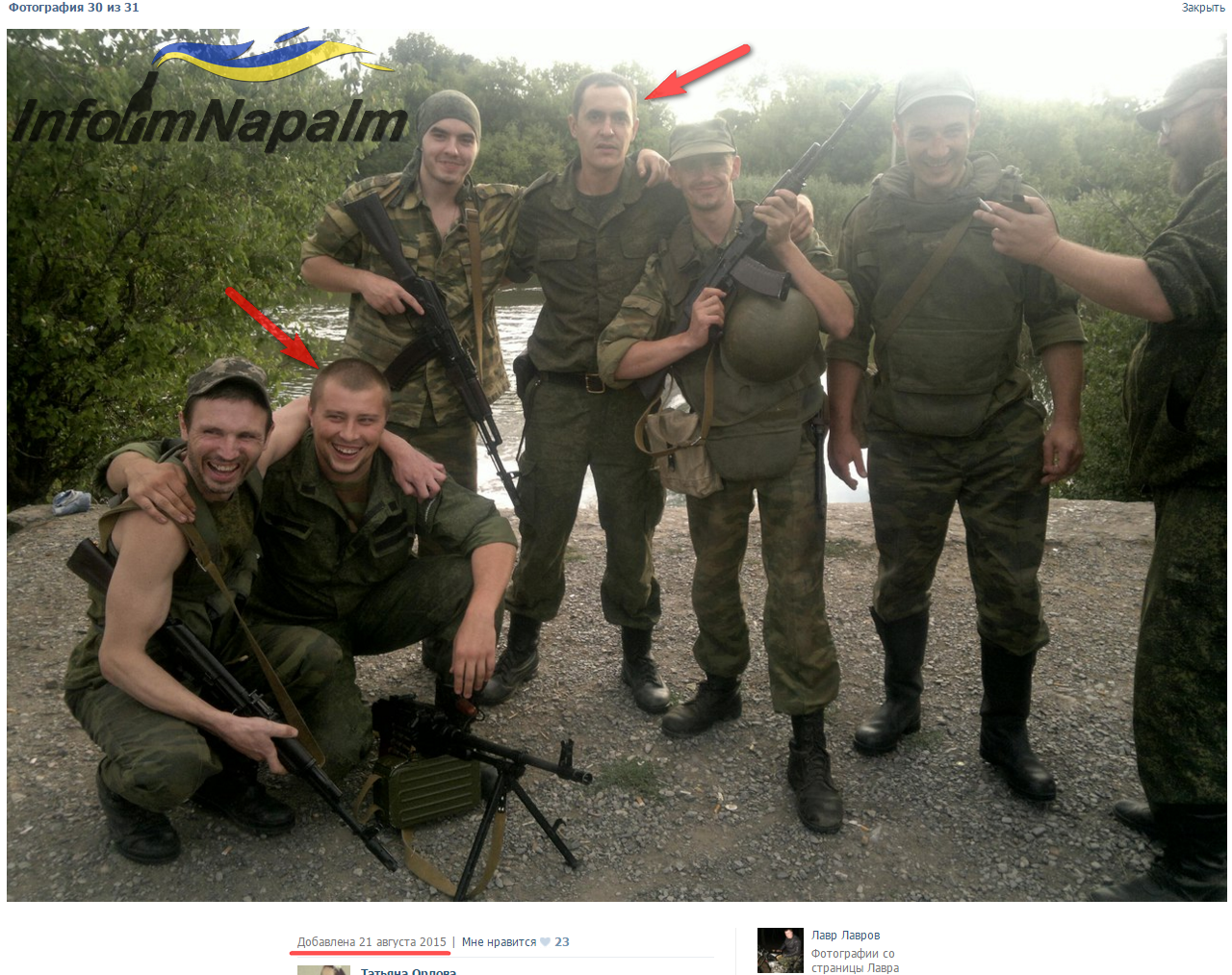 A picture with geotag city of Horlivka, Ukraine.