Russian Terrorist Putilin Sets Up His Employers from Kremlin 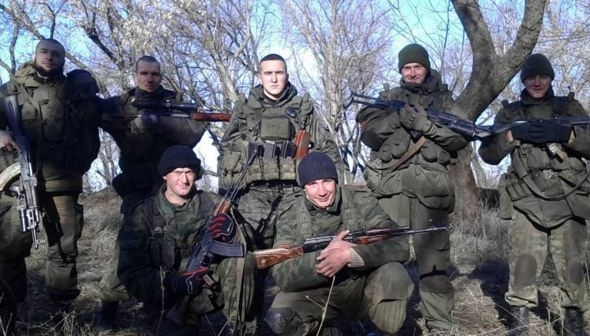 Volunteers of the InformNapalm international community would like to introduce you new evidence of Kremlin’s sponsorship and copartnership in ‘Novorossiya’ militants training and deployment them to Donbas. The recently added to the ‘Myrotvorets’ database Russian citizen Vladlen Putilin will be the object of our investigation. Deep analysis of the figurant’s social profiles let us find several interesting facts which are linked to our previous publications and present the involvement of Russia in initiation and waging of the undeclared war against Ukraine. 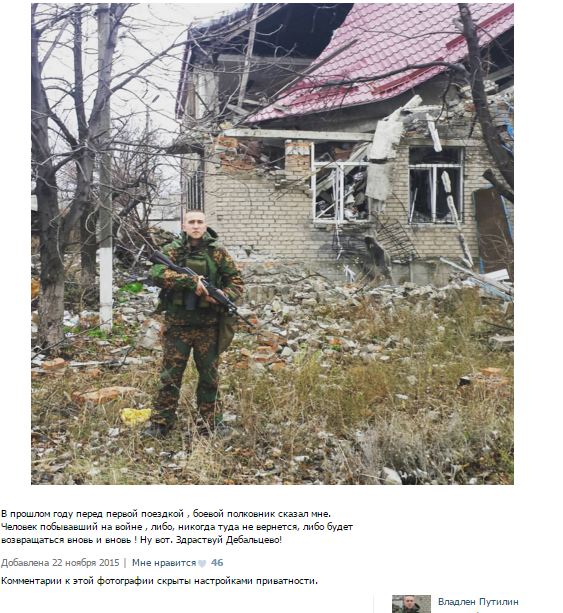 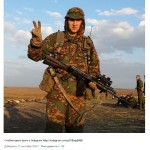 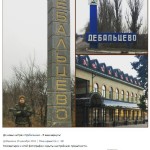 There is a lot of pictures in Putilin’s albums which show his ‘tour of duty’ in the ranks of the Russian-terrorist forces, but we will analyze just a couple of them:

1. This is a photo from ‘Novorossiya’ militant training base in Myasnikovsky raion of Rostov Oblast, Russia. In the foreground you can see a ‘Datsun’ offroader, and in the background – APCs, MAZ fuel tanker, ZiL vehicle and a white tarpaulin tant. 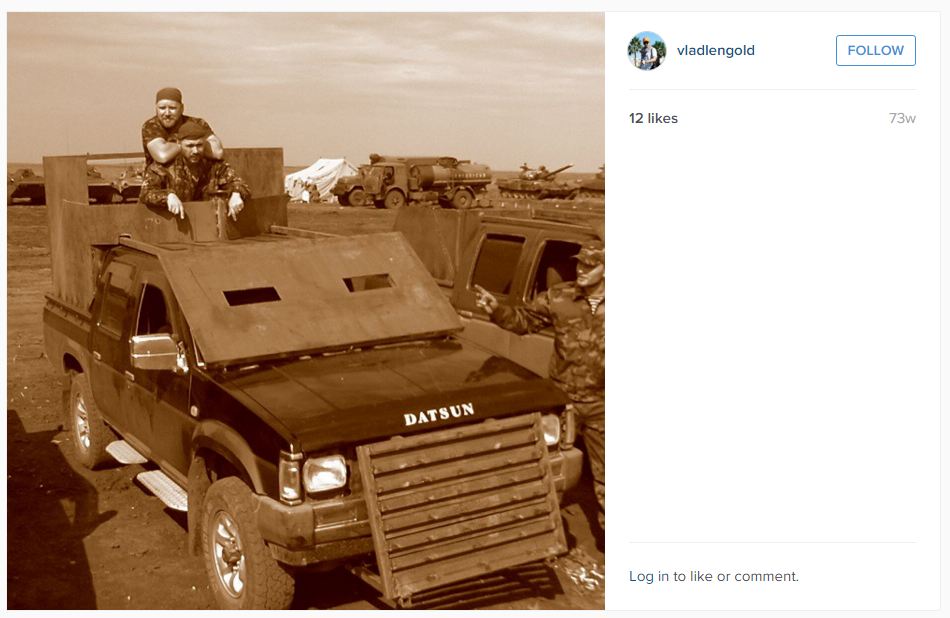 There is no doubt that the picture was taken in Rostov Oblast. In the early fall of 2014, InformNapalm disclosed this Russian camp thanks to the mistake of a GRU reservist. Our archive contains a photo with ‘Myasnikovsky raion’ geotag with the same self-made armored cars and other equipment, including APCs and tanks.

Refer to “Russia as a international terrorism sponsor: training camps in the Russian grounds and the ‘invasion formations’” (in Russian) from September 27, 2014. 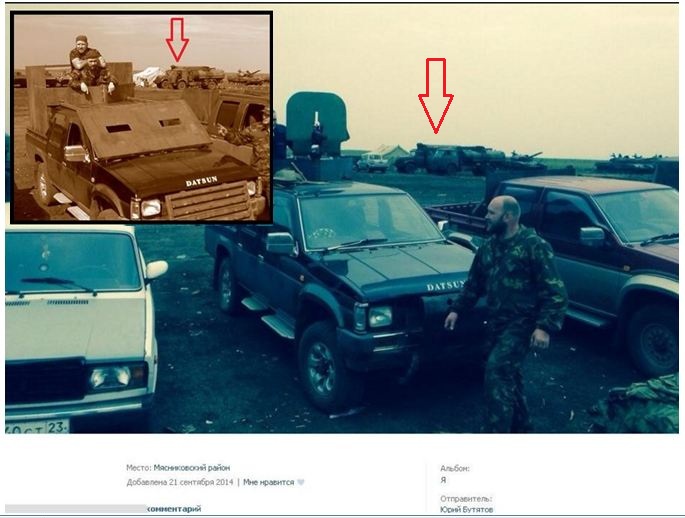 2.  Here we have a photo of one of the T-64 tanks from the weapon storage and maintenance bases of the Russian army. Dozens of such units with ‘For Donbas’ and ‘Kozak’ [Cossack] markings were transferred by Russia to Donbas through Rostov Oblast. Taking into account the chronology of the slides (they were uploaded half a year after the events), the tank was pictured at the moment of passing it to militants of ‘Novorossiya’, the outsource forces of the Kremlin’s regime. One can find ‘For Donbas’ inscription on the right side of the tank and ‘LPR’ on the front. 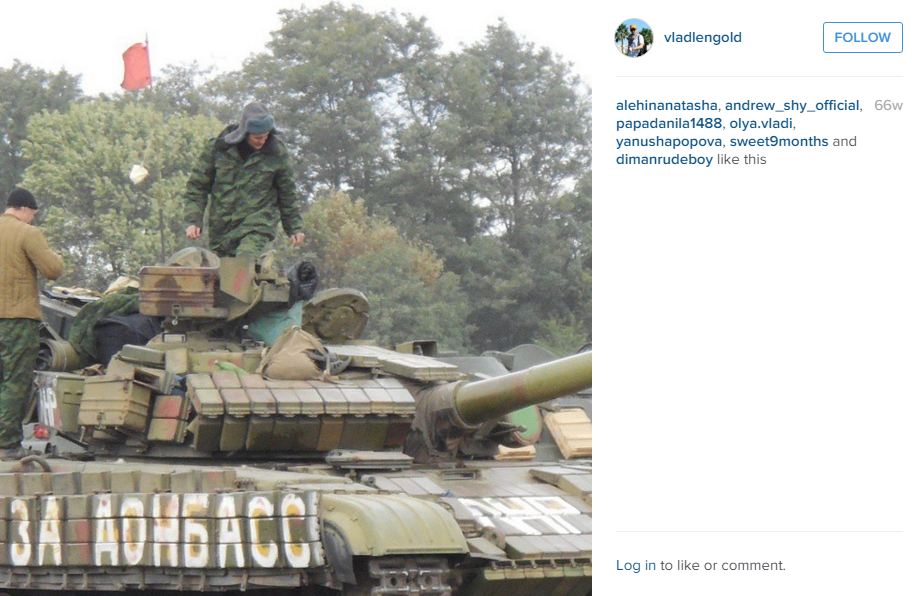 Once again the InformNapalm’s archive is here to help. Obviously, this photo was taken in Rostov Oblast of the Russian Federation. Back in August of 2014 we tracked the whole process of the Russian outdated equipment deployment to ‘LDPR’ terrorists, trained in the camps of Rostov Oblast near the Ukrainian border. We keep a photo, presumably, of the mentioned T-64 tank with ‘For Donbas’ and ‘LPR’ inscriptions, same red banner on antenna and number ’22’ on the headlamp (painted over with green color on the first slide). 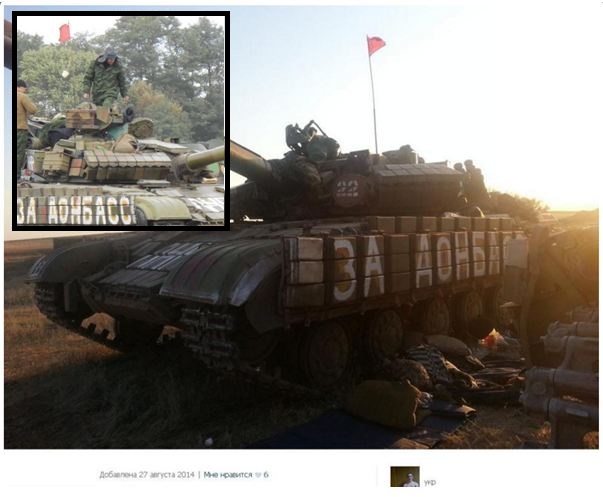 3.  This is a picture made in the fields, where our figurant holds AK rifle with attached silencer posing in front of Ka-52 battle helicopters. 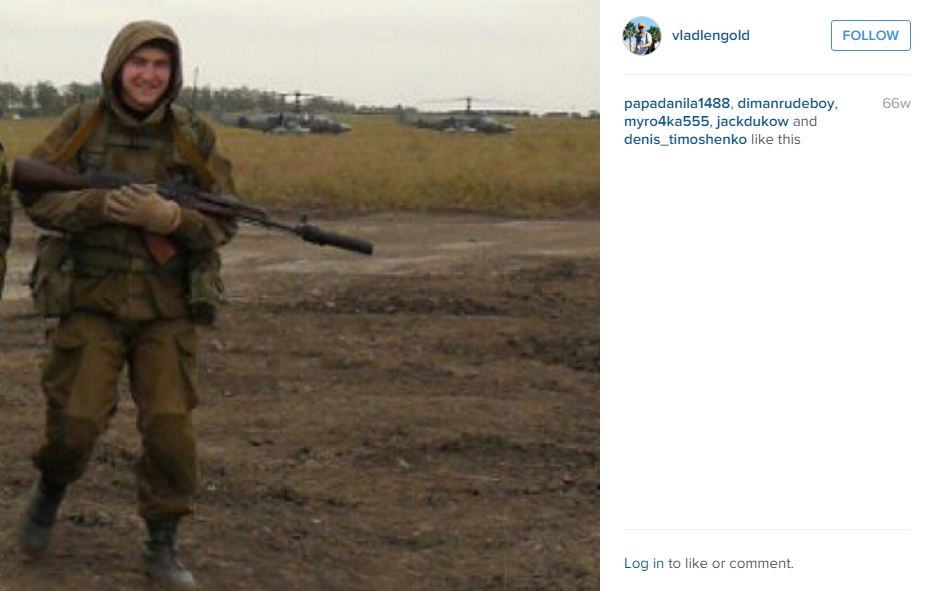 And again the InformNapalm’s archives come in handy. There is no doubt that this picture with Ka-52 helicopters was made in Rostov Oblast. In September of 2014, thanks to the information leaked by a serviceman of the 346th brigade of GRU, we registered battle helicopters of this type on the duty in the fields (photo). 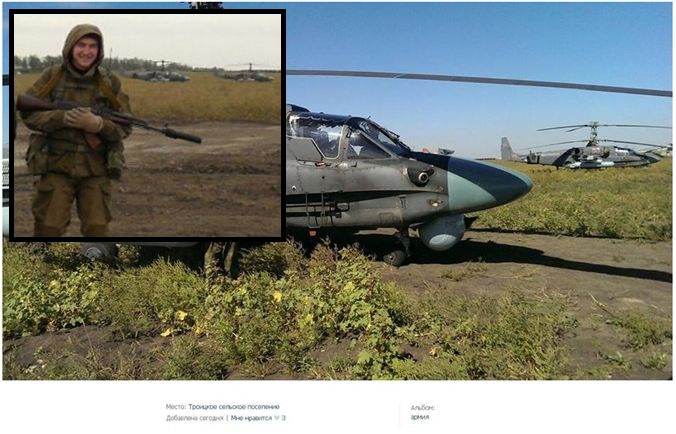 The following Putilin’s revelations under the travesty of Putin are worth paying attention too (August 20, 2015):

Everything is obvious and there is no need to summarize. These facts relate to a period of 2014, but this does not mean that Russia reneged on its evil intentions, it will be discussed in our next publication.