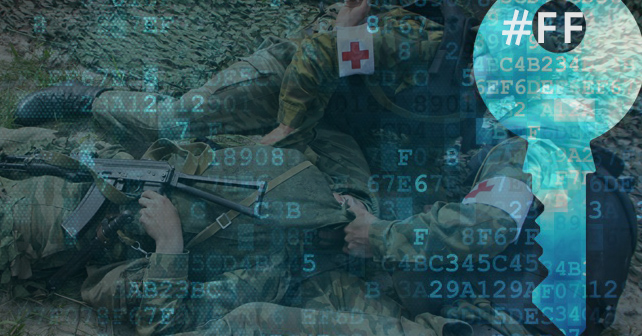 InformNapalm international volunteer community continues the series of publications based on the results of hacking of dozens of email accounts of key personalities who coordinate activities of militants, the Russian mercenaries and servicemen present in Donbas and Syria. The current investigation reveals which medical services (and in which medical facilities) are being provided to the Russian and foreign VIP mercenaries of the Russian Federation.

It should be reminded that the initial data for this deep OSINT-analysis have been provided by the Ukrainian hackers from the Falcons Flame (#FF) anonymous group. They extracted the raw materials from the email accounts of the terrorist groups and the Russian organizations engaged in supporting militants.

More information about this operation can be found here: ‘What is burning the Ministry of Defence of the Russian Federation? InformNapalm to start series based on leaked information’

During the analysis of the data set retrieved from the email of the ‘Union of Volunteers of Donbas’, our attention was drawn by the following letter: 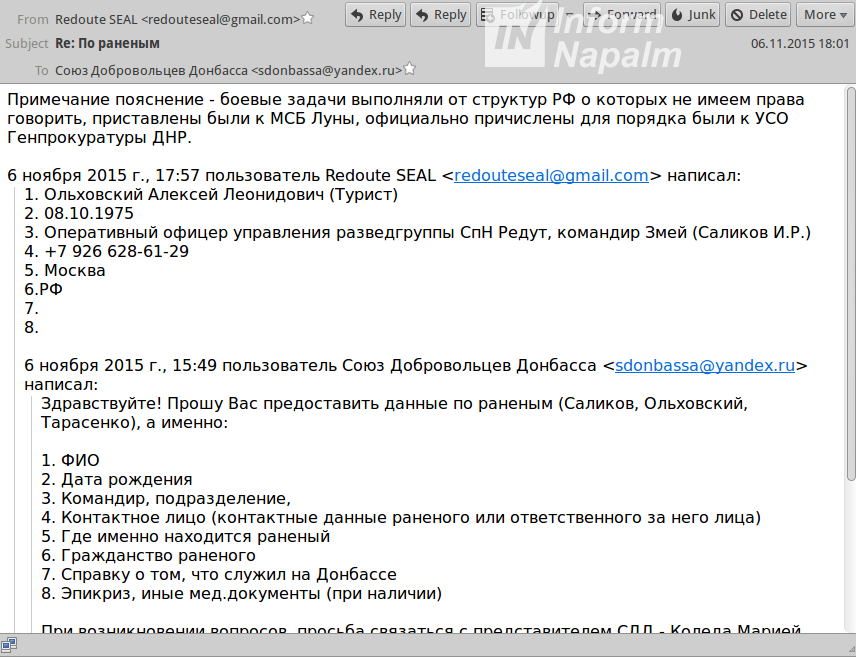 The letter was sent from redouteseal@gmail.com. It contained data on wounded mercenary Olkhovsky and this note: “Explanation – the combat operations were conducted on behalf of the RF’s authorities we have no right to speak about. We were assigned to Loona’s motorized rifle battalion, but officially we were listed at the Special Operations Directorate of General Procurator’s Office of DPR”.

As a result of an in-depth OSINT-analysis, the InformNapalm investigators were able to establish the data on two Russian mercenaries who carried out combat missions on behalf of the Russian special services. These are:

Salikov Igor Rakipovich (callsign Zmei [Snake]), born on November 9, 1963. He is the commander of the ‘Redut’ scout company of the Snezhinsk motorized rifle battalion. Lives in Kaluga city, Russia. Mobile phone No. +79105415944. 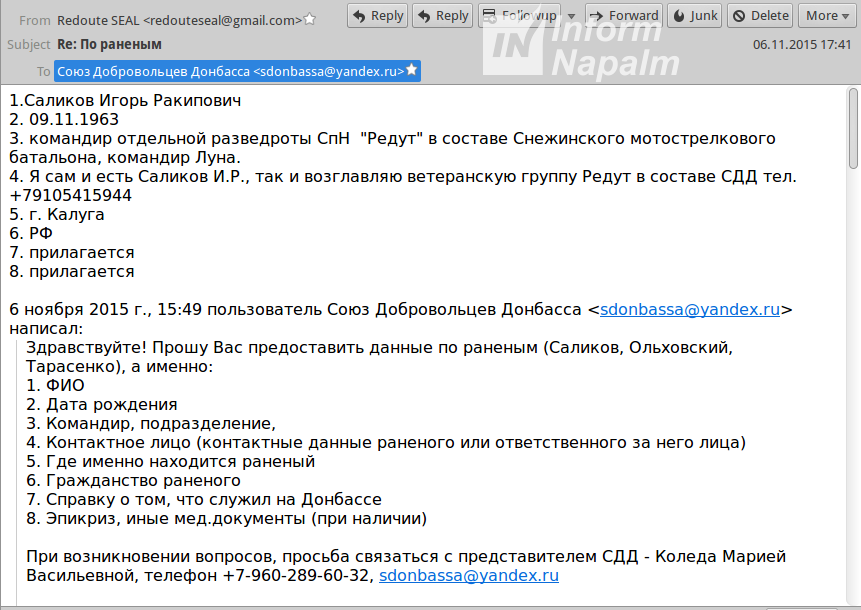 The letter had photos of 2 documents attached: a reference from the so-called “General Procurator’s Office of DPR” and a hospital discharge summary (gunshot wounds of both feet, received on June 28, 2014), issued in July of 2014 by traumatology department of the Federal State Institution No. 1602 – Military Clinical Hospital of the Russia’s Ministry of Defense in Rostov-on-Don. 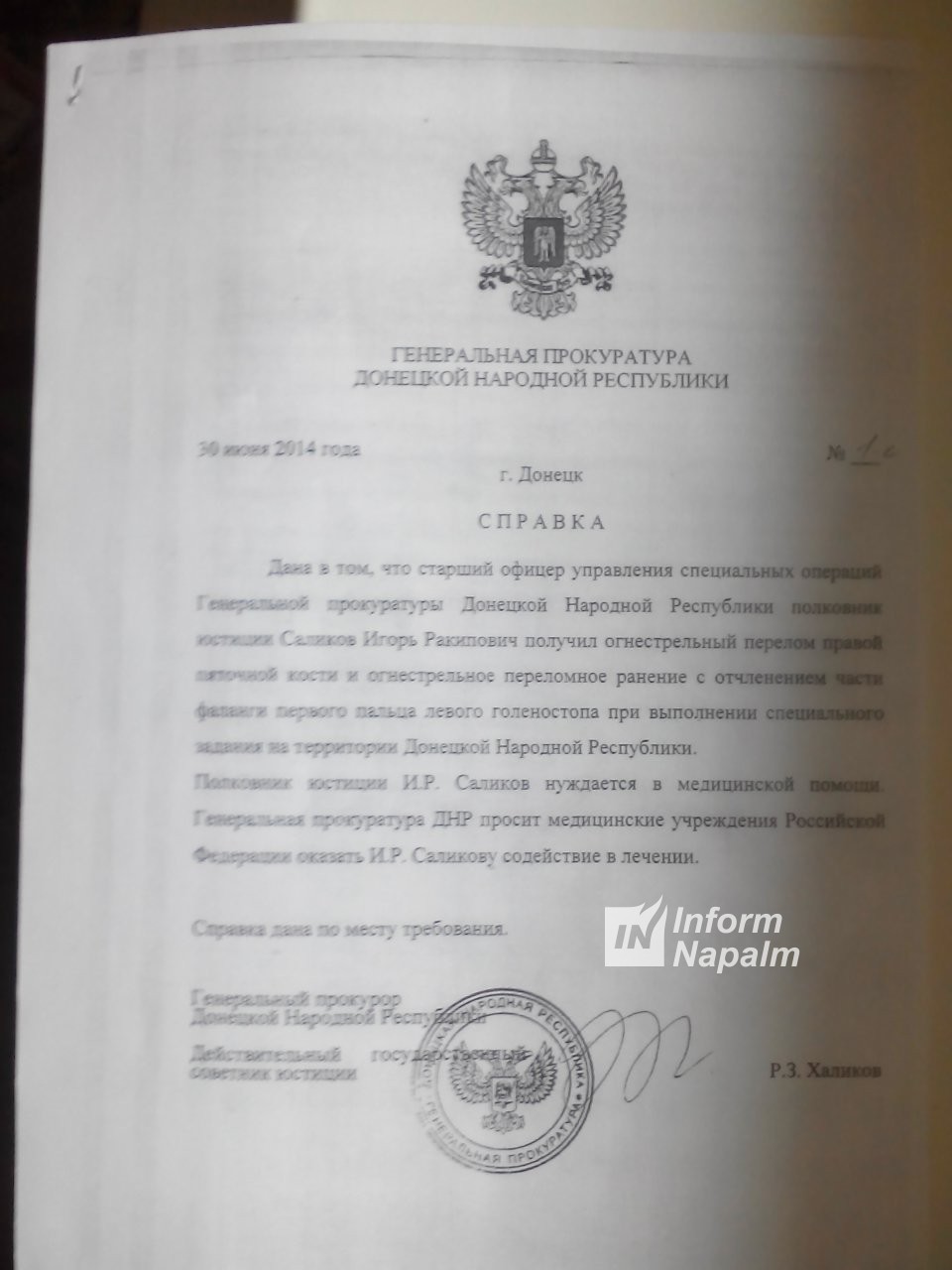 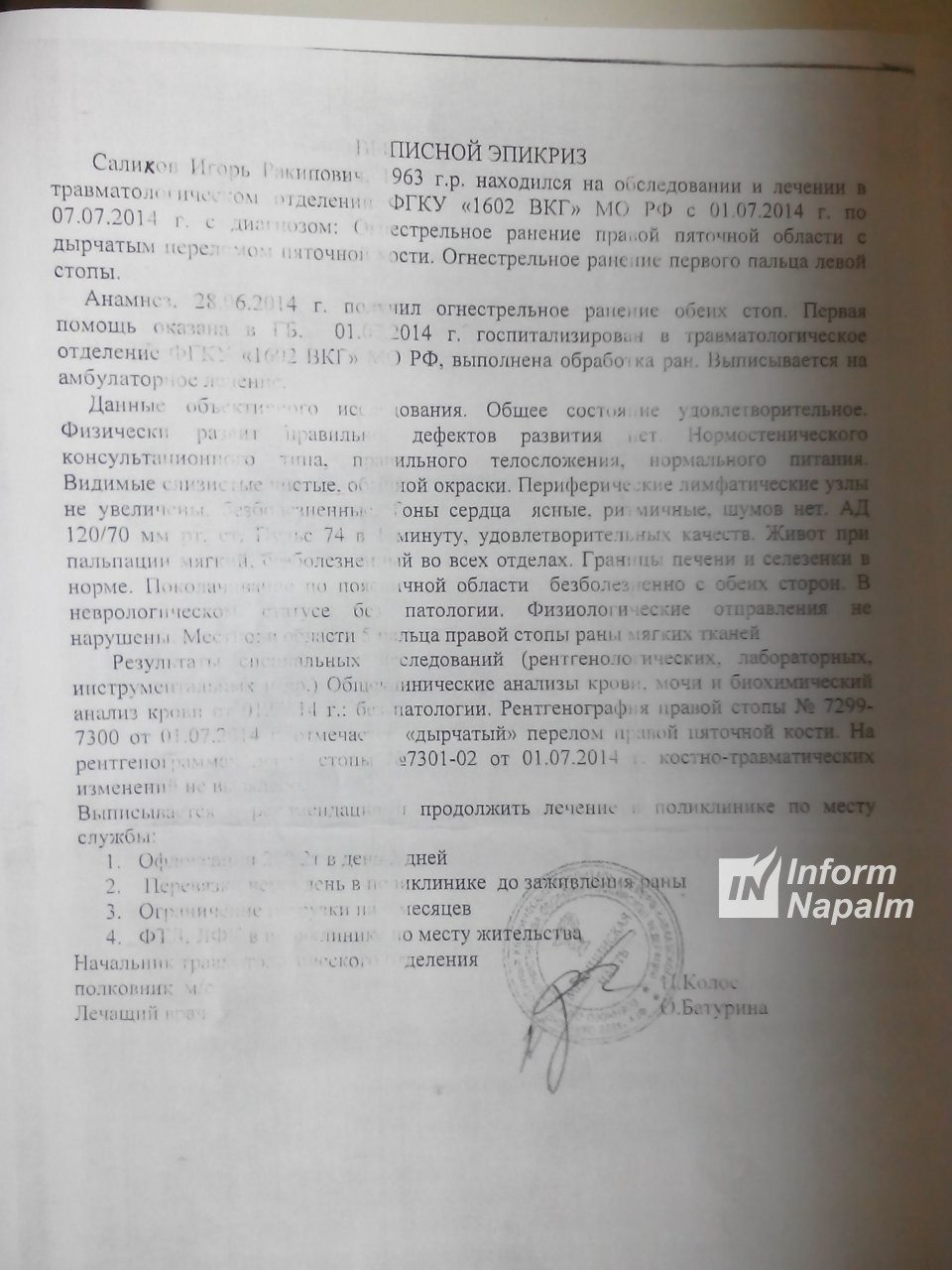 Taking into account redouteseal@gmail.com email, Salikov Igor Rakipovich seems to be engaged in journalism and writes on military theme under a pen-name Koval I. ([1], [2]). Please note that the birthdays on the website and in the letter are the same – November 9, 1963. Here is what Salikov says about himself: “I was born and taught… served in MMD and TurkMD [former Moscow and Turkmenistan Military Districts – editor’s note]. There have been wounds and honors, as usual. I had military training in different districts. I have several military specialties – I stand for personal enrichment. After the collapse of the Soviet Union and leaving the special-purpose forces, which went under the control of a different state, I chose the path of a freelance in the field of military affairs and hit the road. People usually erroneously use term ‘mercenary‘ (do not be afraid of this word, it is not that terrible, and, moreover, it is blurred, since it is absolutely abstract and wrong, including its legal content). Events in Ukraine, Crimea and Donbas only strengthened my belief (based also on my own experience) in the fact that the modern Russian Army went the modern path of development, far from the conservatism of the past. I believe and hope for the success of Russia in terms of a great future, and the formation of healthy and efficient armed forces. 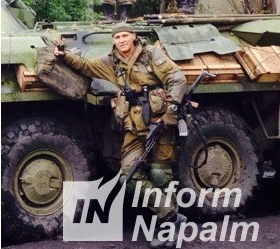 We need a strong economy. That is not possible without enhanced army and navy, and efforts of all military specialists are necessary. Homeland’s military service appears today in the form of a hybrid, and we can not measure it according to the old templates. Many people do serious ‘stuff’ these days. Here is how it works now … I also try to do something in this direction, even now.”

This ‘hybrid freelancer’, who carries out special taskы of the RF’s authorities, has also left a picture of himself.

Olkhovsky Aleksey Leonidovich (callsign ‘Tourist’), born on October 8, 1975. He is an operative officer of the ‘Redut’ recon group, ‘Zmei’ Salikov is his commander. Lives in Moscow. Mobile phone No. +79266286129. Documents regarding Olkhovsky were found in the correspondence between Salikov and the ‘Union of Volunteers of Donbas’. 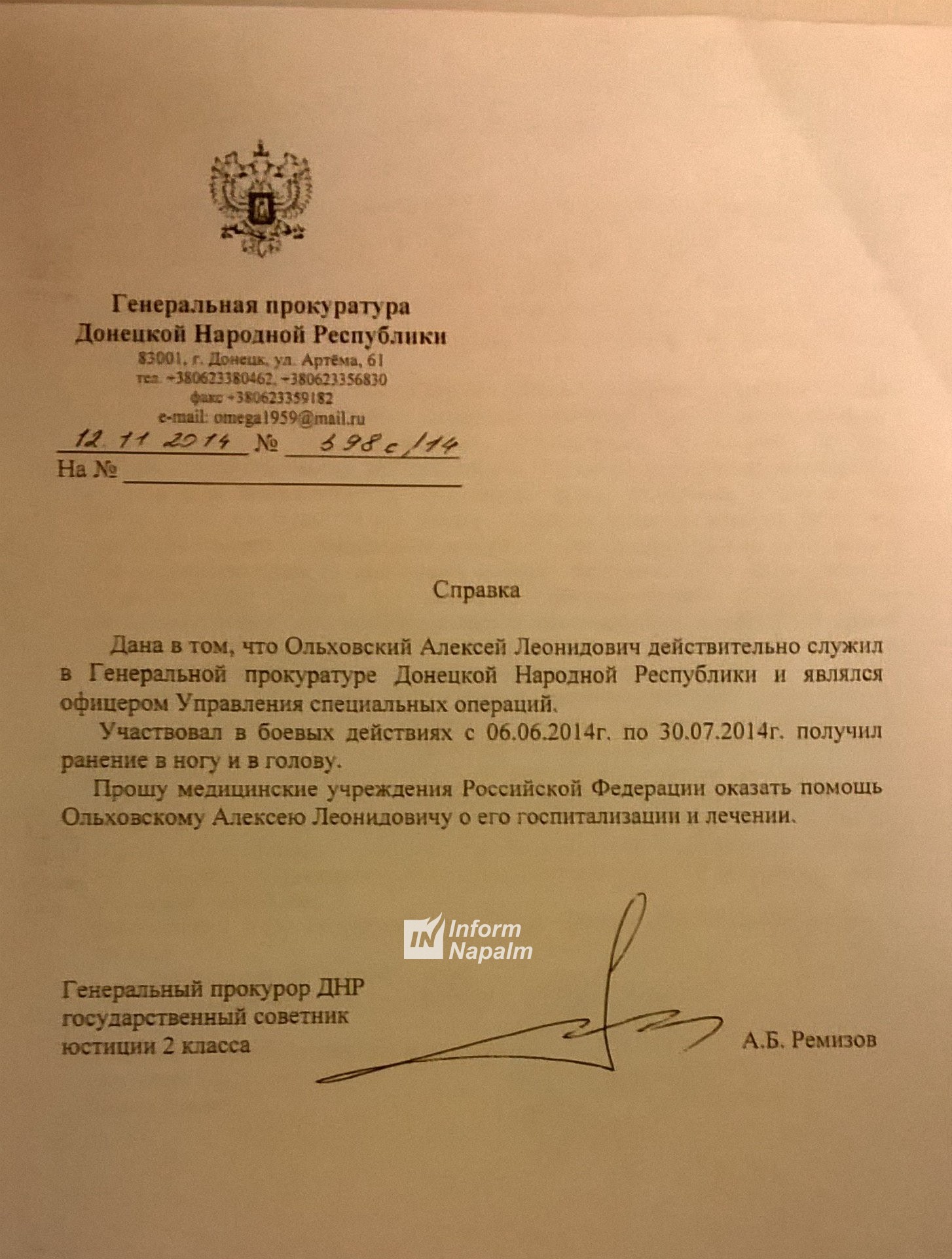 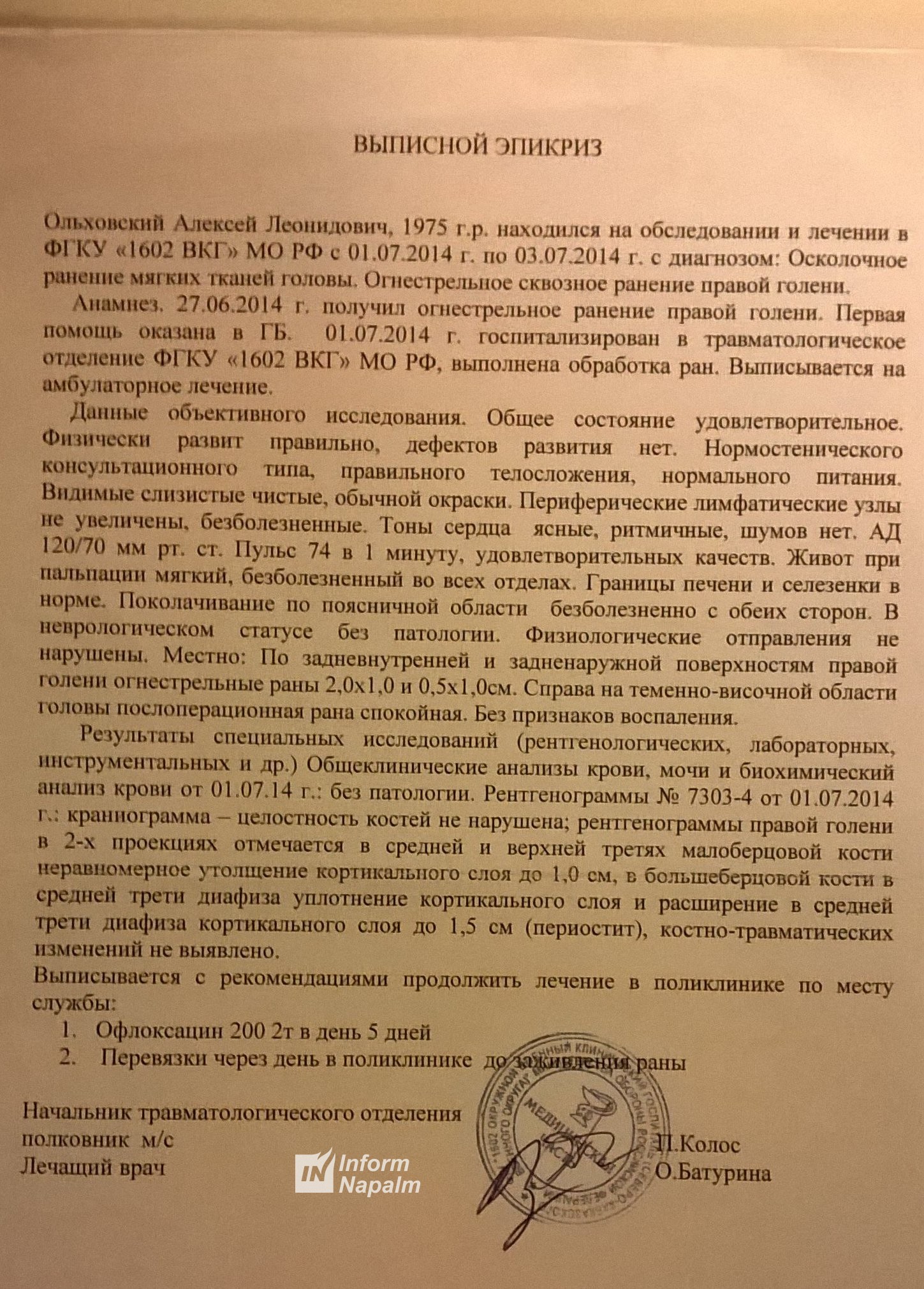 The letter had photos of 2 documents attached: a reference from the so-called “General Procurator’s Office of DPR” and a hospital discharge summary (shrapnel wound of soft tissues of the head and a penetrating gunshot wound of the right shin, received on June 27, 2014), issued in July of 2014 by traumatology department of the Federal State Institution No. 1602 – Military Clinical Hospital of the Russia’s Ministry of Defense in Rostov-on-Don. The Olkhovsky’s mobile No. (+79266286129) was specified in the letter and that helped our volunteers to find additional information about another mercenary ([1], [2]) who was the head of ‘VO7 Ltd.’ company in Murmansk and the head of ‘Ikar’ Fund for assistance to veterans of combat operations.

Cunha Cordeiro Rodolfo, citizen of Brazil, born on September 29, 1987. He is a scout sniper of the so-called ‘1st separate motorized rifle brigade of DPR’ (military unit No. 08801).

Below you can find photos of his military ID issued on behalf of ‘DPR’ terrorist organization, and medical references. 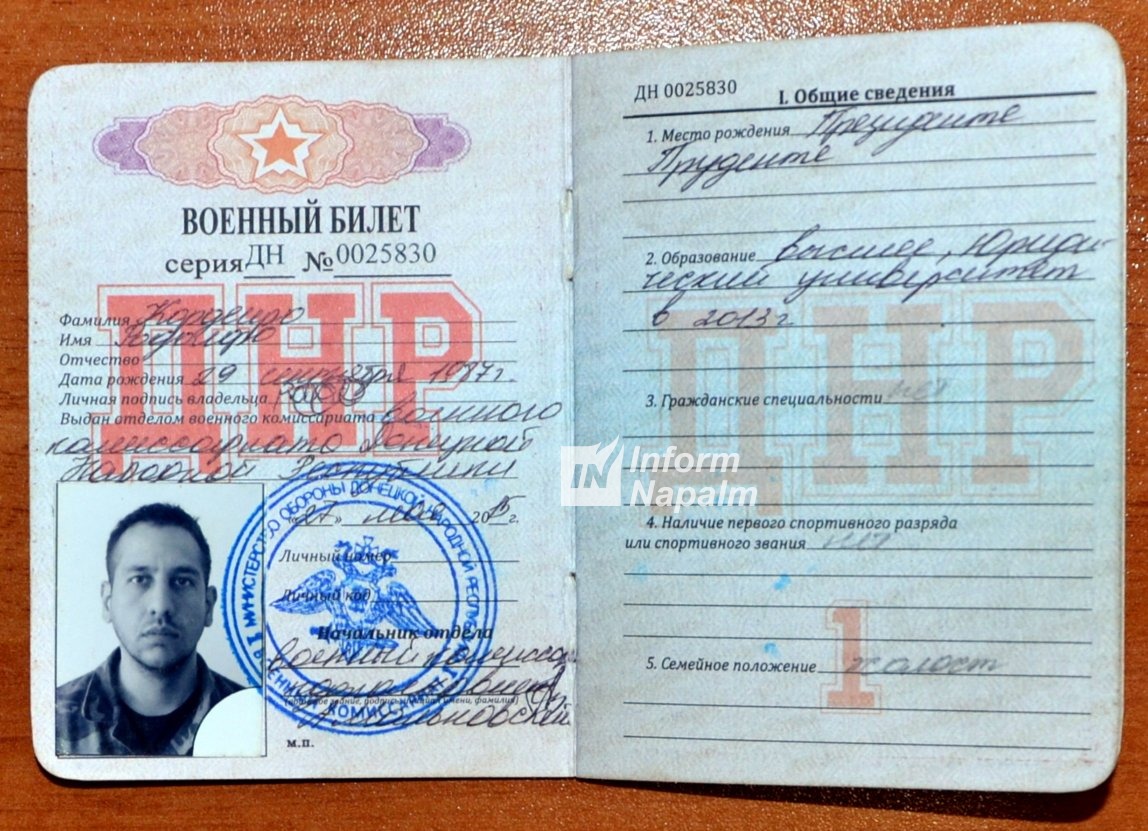 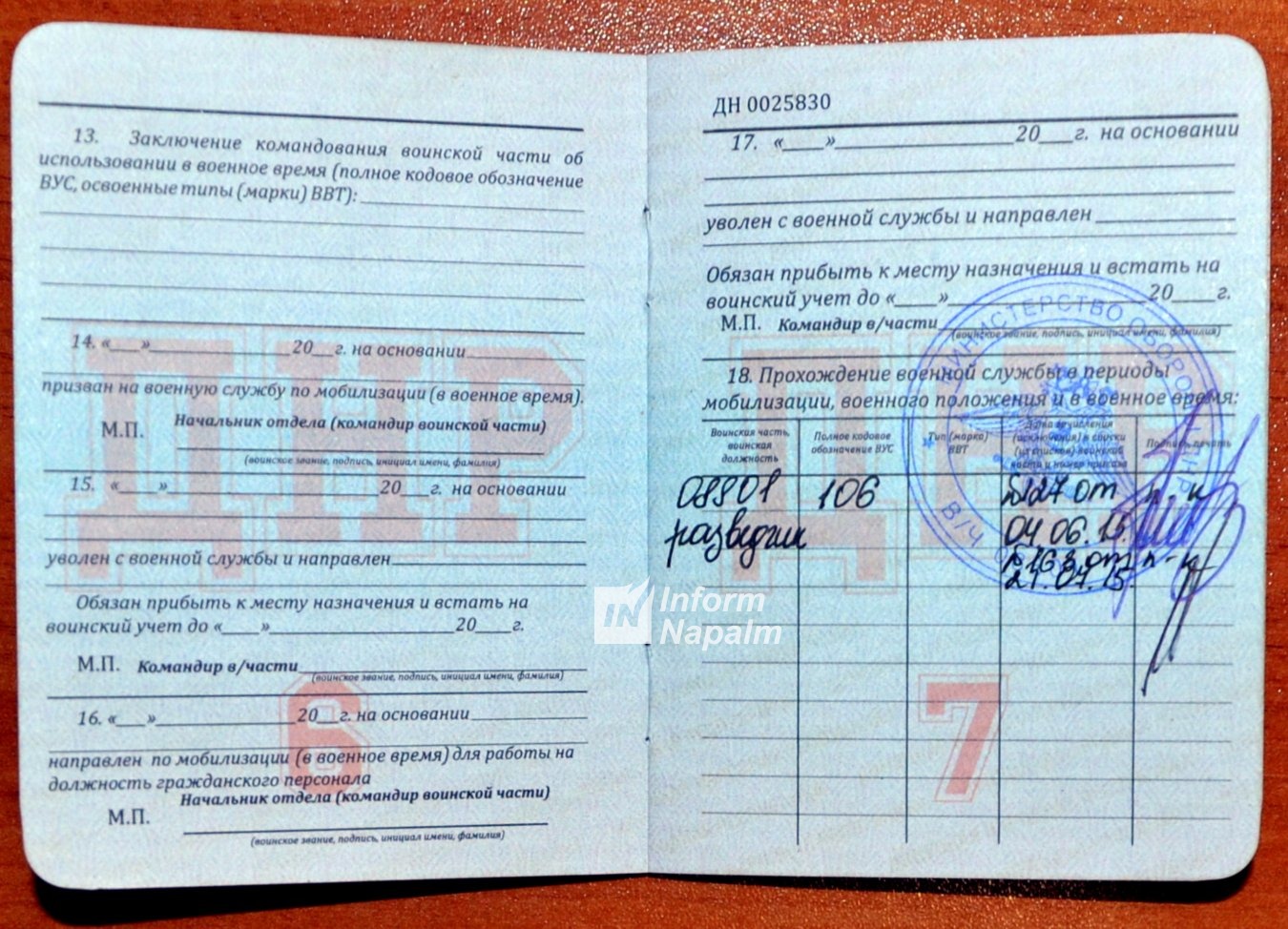 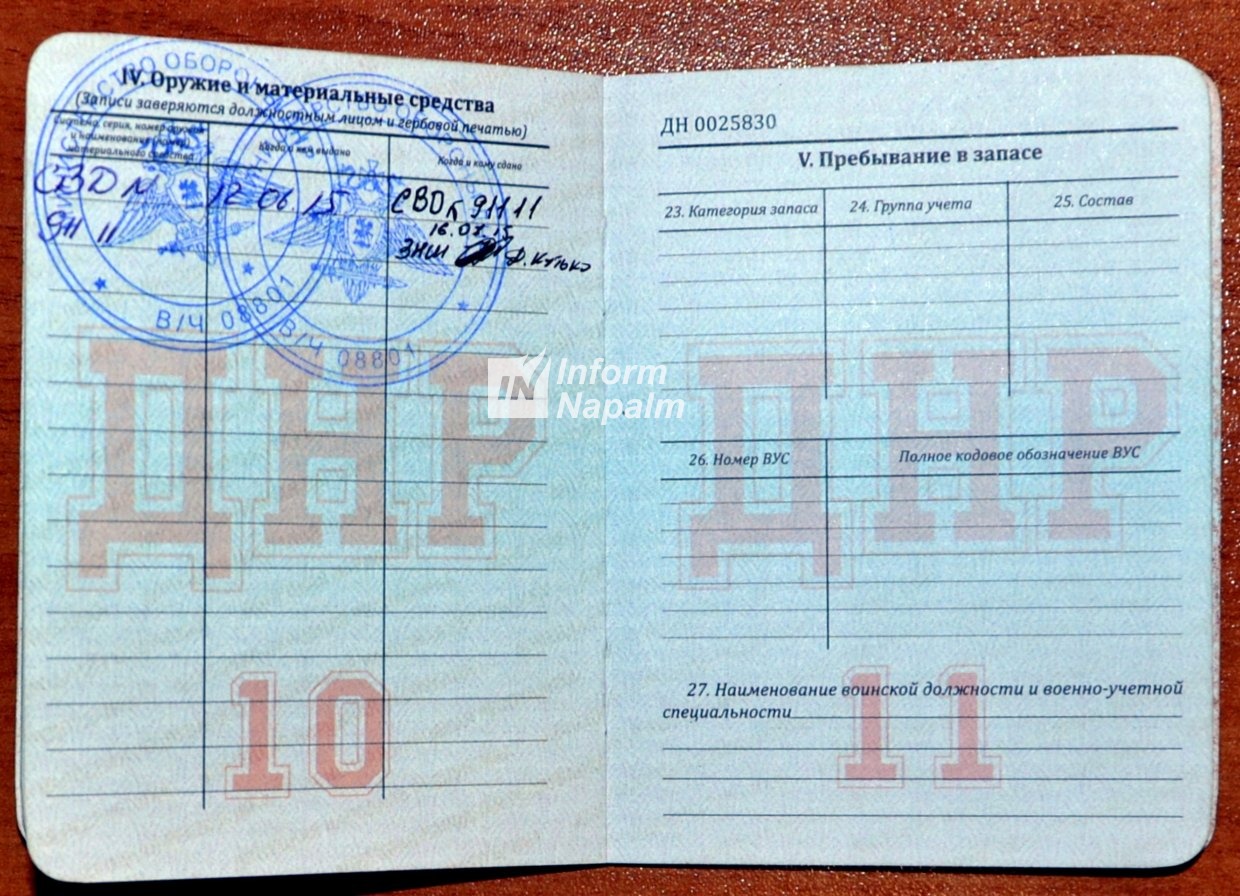 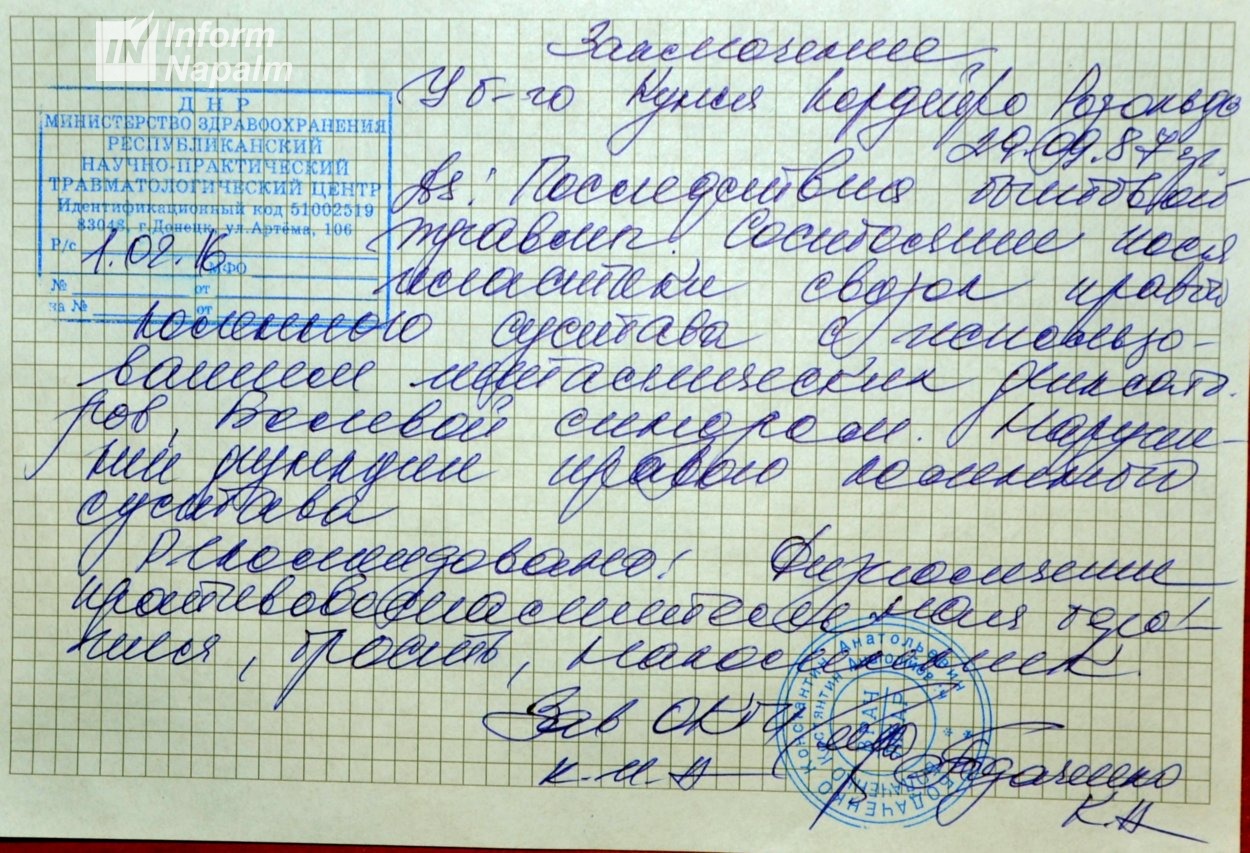 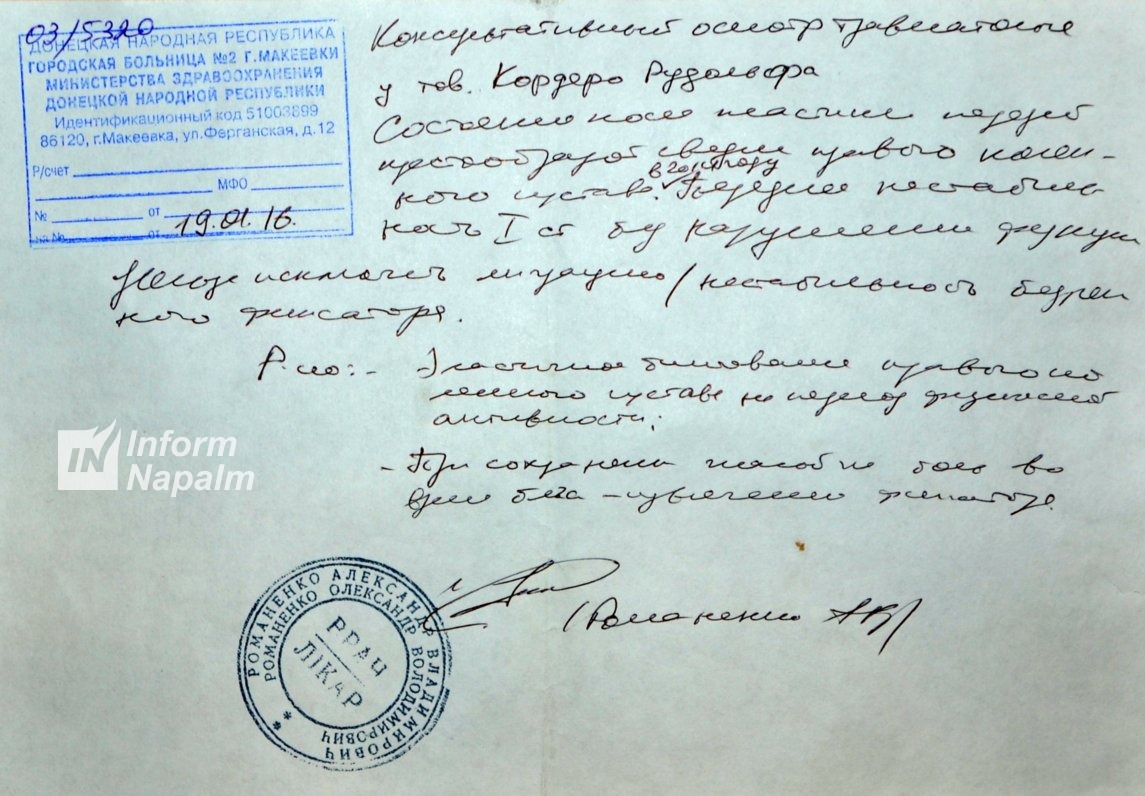 According to the correspondence between the ‘Union of Volunteers of Donbas’ and the supervisor of the North-West region, Cunha now undergoes medical treatment in the Hospital for War Veterans (St. Petersburg, Russia). 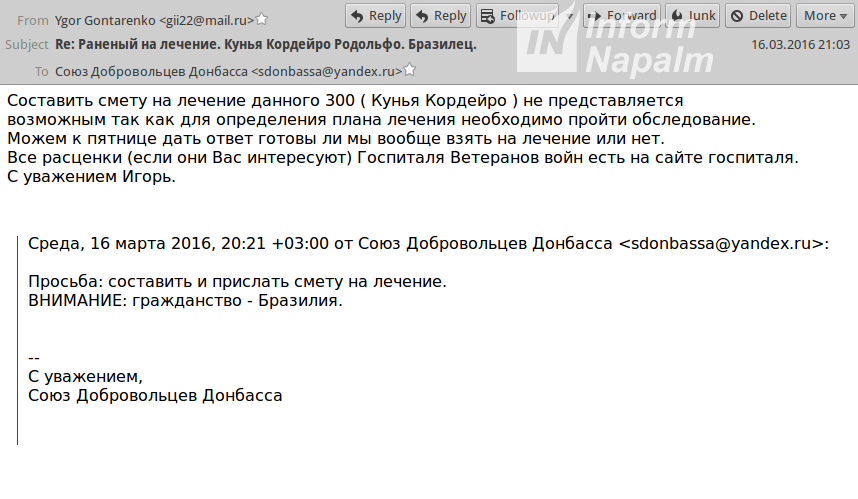 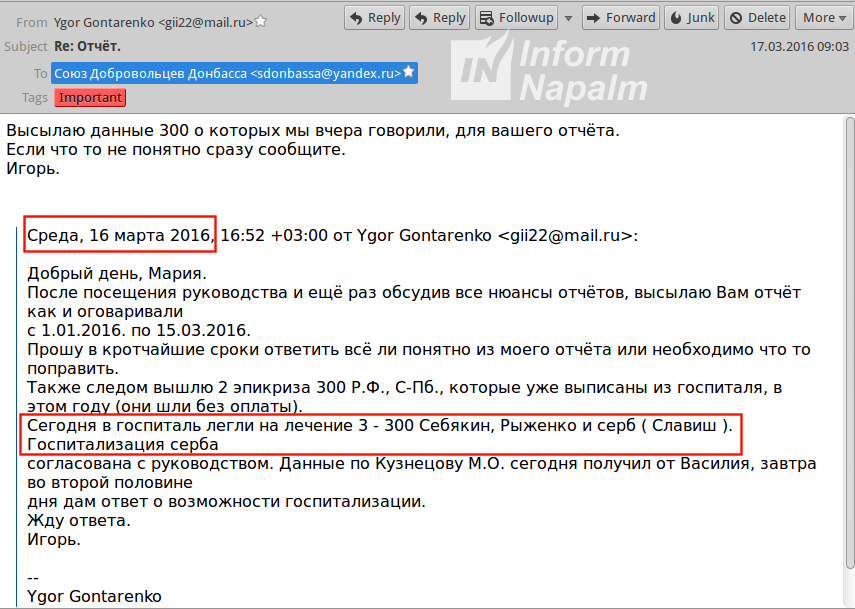 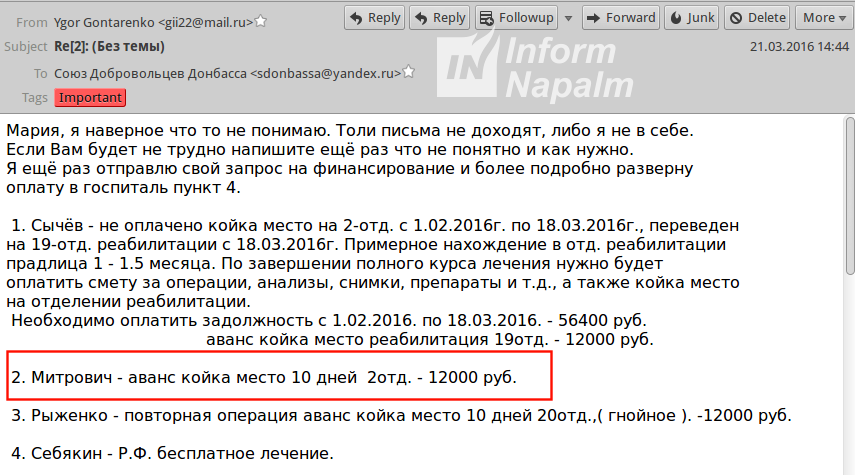 The screenshot of the letter shows an interesting detail: “3 300s [‘300’ means ‘a wounded’ in military slang] arrived to the hospital today – Sebyakin, Ryzhenko and a Serbian (Slavish). Hospitalization of the Serbian has been agreed with the authorities.” Then you can see the price for the treatment in the military hospital – 12 000 rubles.

Medical services for the mercenaries of the ‘Union of Volunteers of Donbas’ are paid in cash through the regional representatives, although the organization also accepts cashless payments. The correspondence shows that the money were handed to the representatives by Olga Kulygina against an acknowledgement. For instance, below you can see photos of acknowledgements, according to which some Aleksandrov Vasily Vladimirovich (Russian passport No. 4513 192977) got 600 000 rubles from private entrepreneur Kulygina Olga Ivanovna (Russian passport No. 4507 901906) for treatment and rehabilitation of wounded persons. 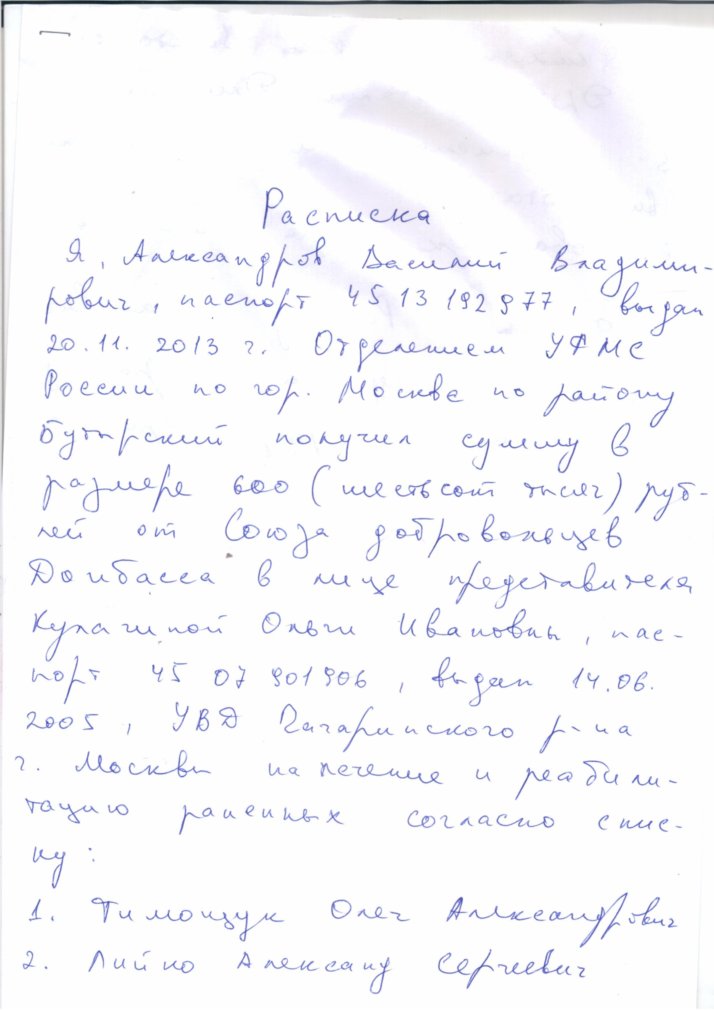 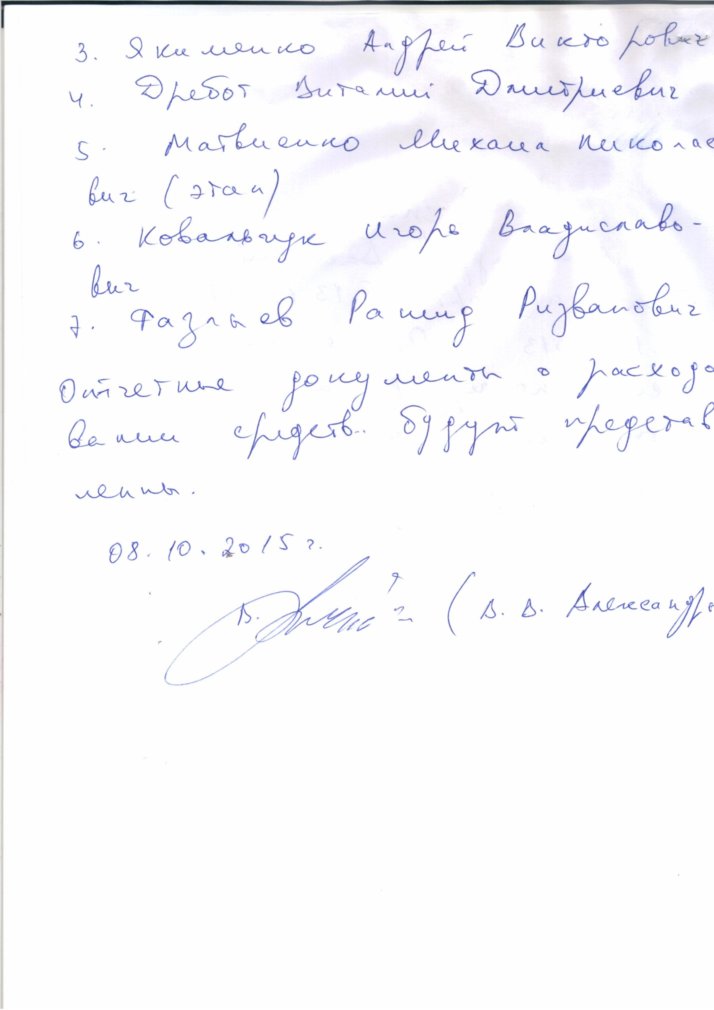 In one of our previous investigations, which was based on found militants’ social profiles and conducted geolocation, we also talked about the topic of Russia’s military hospitals.

At the same time this article shedded light on the facts of integration of the Russian medical system into the hybrid combat activities process and combat service support, facts of payments for treatment of the ‘military freelancers’ and foreign mercenaries in military hospitals. Such payments are done via front foundations and structures which supervise the supply of the mercenaries in the context of the unified system of coordination with the Russian special services. Law enforcement agencies, FSB, military doctors, nurses and a range of public servants are involved in the functioning of this system maintaining terror in the territory of neighboring states.

InformNapalm has developed an online database that contains observations and investigations of Russian military involvement in Ukraine, displaying evidence of deployment of at least 60 Russian military units: bit.ly/RussianPresenceEN.

(CC BY) Upon reuse of the material, an active link to the author and our project is desirable.

Original article written by Mikhail Kuznetsov based on the data provided by the hacker group Falcons Flame, translated by Stepan Grishin