Representatives of NATO, the US and the UK made important statements during the 9-th Kyiv Security Forum 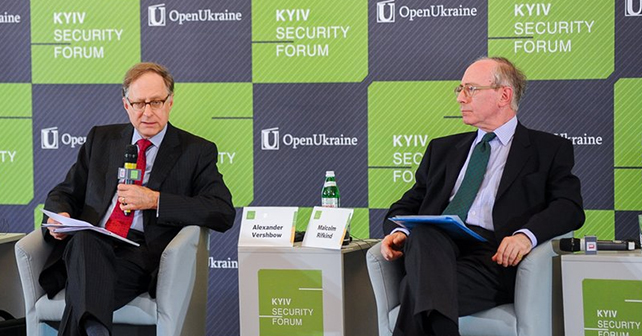 On April 14, 2016 the two-day ninth Security Forum, organized by the Arseniy Yatsenyuk Open Ukraine Foundation started in Kyiv. More than 400 international and Ukrainian leaders, representatives of political, business and social circles from more than 20 countries around the world came together to discuss global security trends and challenges in contemporary international relations.

Representatives  of the InformNapalm international volunteer community   and our partners from the Prometheus security environment research center also attended this international event.

This year, main topic of the forum was the situation in Ukraine and at its borders, its origins and possible consequences for the state, region, Europe and even the world at large. Ukrainian and international experts offered their forecasts of future scenarios and their consequences, as well as gave expert advice on building stability and security for Europe and its neighboring regions in the future.

For the readers of InformNapalm, we are highlighting the key messages from the speakers of the 9-th Kyiv Security Forum, revealing the pattern of the current international approaches to assessing and addressing of global security crises. 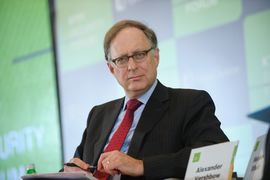 “NATO condemns and will never accept the occupation of the Crimea. The Russian occupation of the Crimea was a disaster for European security. And the military aggression in eastern Ukraine was not a surprise (as even then in Georgia there were preconditions for this). Russia and its minions are constantly violating ceasefire regime in the Donbas. Therefore, the international community must constantly put pressure on it to ensure that it fully complies with the requirements set out in the Minsk agreements. And if it does not, this pressure will continue”.

Malcolm Rifkind, Chairman of the Defense and Security Committee of the United Kingdom (2010-2015), Secretary of State for Foreign and Commonwealth Affairs (1995-1997): 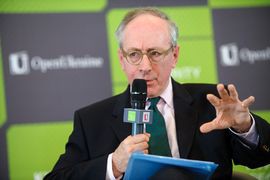 “Ukraine as a state, as a nation was reviving itself and had very tough times, and these difficulties have been deepened by the fact that Putin and the Russian Federation decided to go for something that was not observed since the Sudeten times – it’s the annexation of Crimea.  And the world must not tolerate it.  We will never recognize the legitimacy of this event. Tough sanctions against the Russian Federation applied by the US and European countries, should be continued as long as the Russian side continues aggression. Russia de facto violated the Budapest Memorandum. Because this step as to violation of the integrity of Ukraine caused damage not only to Ukraine but to the nuclear non-proliferation movement in the world in general.

As for the prospects of Ukraine’s entry in the EU.

The EU is changing and not always in a way preferable for those who have traditionally been elite in Brussels. Recent trends observed in the member states of the European Union on the possible transformation of the community, will facilitate acceleration of issue on Ukraine’s membership in the EU. But not only the UK, Sweden, Denmark, possibly Poland, do not want to accept some forms of full integration into the EU. And if EU membership will provide a possibility of partial integration without full implementation of the most insufficient requirements and will enable to maintain its national freedom in some areas I think that for Ukraine it will mean that its’ way to the EU membership will become shorter than it is now.”

Paula Dobriansky, US Under Secretary of State for Democracy and Global Affairs (2001-2009): 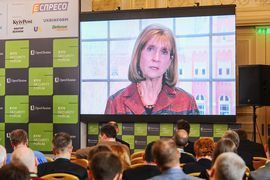 “Through aggression in the East of Ukraine and the illegal annexation of the Crimea Western values were challenged, as well as institutions and alliances that maintain peace and stability for decades after the Second World and the Cold War. Therefore, we need to be united and have a consensus in support of these institutions and values. We have to work not only on the issue of the continuation of sanctions, but also look for additional sanctions because it is necessary to raise the price of aggression and ensure that the violence is stopped and territorial integrity Ukraine is respected. This Forum takes place at crucial times when Ukraine is trying to fight on the Eastern front and at the same time it seeks to establish economic development, fight corruption, and to integrate into the European community. We need to be vigilant and help Ukraine in achieving this extremely important goal”. 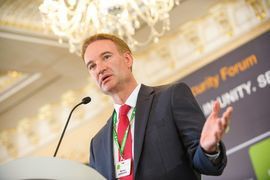 “If Ukraine continues the reforms, the United States will continue to support it. As for the security aid for Ukraine, especially concerning reforms of its armed forces, I am pleased to note that in 2016 the US will give the country 335 million dollars for conventional forces and Special Operations Forces of the Armed Forces of Ukraine. At the same time the US plans to double assistance for the Border Service and the National Guard of Ukraine.  There has been done a lot in Ukraine after the Revolution of dignity when we speak of reforms. We hope that Ukraine will not turn off from the road of reform, for the United States plans to contribute to its positive changes. The situation in the Donbas is now very fragile.  We note significant ceasefire violations by pro-Russian forces.  Moreover, Russian weapons constantly fill the Donbas. The OSCE mission has repeatedly fallen under mortar fire, it is often denied access to many places in the Donbas for inspections. All this leads to the conclusion that Russia has resorted to a controlled escalation of the situation in the Donbas. Furthermore, the Russian side now actively manipulates its’ narrative about the events in the Donbas, in particular, accusing Ukraine of violating the Minsk agreement. US policy will be aimed at the preservation of sanctions against Russia as long as Ukraine does not return the control over its eastern borders and the Crimea”.

Kyiv Security Forum is an annual international event, initiated in 2007 by the Arseniy Yatsenyuk Foundation “Open Ukraine” as a platform for debate and expertise exchange on the most pressing security issues in Europe and the Black Sea region.

3 Responses to “Representatives of NATO, the US and the UK made important statements during the 9-th Kyiv Security Forum”