Analysis of the Snap Exercise Performed by Russian Armed Forces from August 25 till August 31, 2016 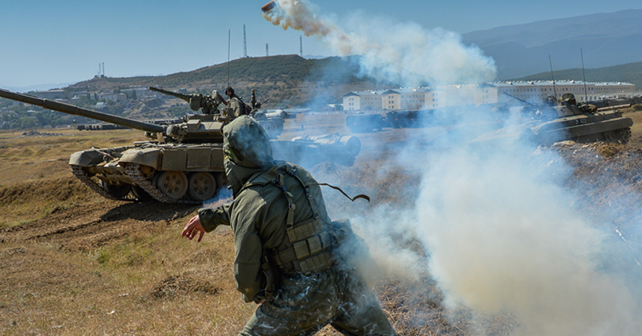 Following the resolution of the Supreme Commander-in-Chief of the Russian Armed Forces, the troops and forces of the Southern, Western and Central Military Districts, Northern Fleet, the Chief Command of the Air Force and Command of the Airborne Forces which had been put on full combat alert, were subjected to snap exercise in the period from August 25 till August 31, 2016. During the first day the involved units exercised their ability to perform the actions according to the established combat alert level, and during the following days – to move the forces and military units to practice ranges and training areas and to prepare them for solving exercise tasks. The snap exercise was performed as part of the preparation for Kavkaz-2016 strategic exercises in the Southern Military District.

The components and tasks of the snap exercise were rather comprehensive. The following general components can be distinguished:

The analysis leads to a conclusion that one of the priority tasks of the snap exercise was to assess the controllability in specific combat conditions of the combined joined force alignment on the levels od “military district command-to-task force”, “task force-to-brigade” and “brigade-to-battalion” interaction of headquarters and command units. A number of snap exercise episodes were practiced at the multi-service and multi-fleet level which allowed assessing the interaction efficiency in performance of joint tasks on land and at sea. This proves that the Russian military and political leaders are interested in evaluating the ability to form and manage new alignments and task forces and to determine their effectiveness. There are reasonable doubts that such drills are related to organization of defense in the territory of the Russian Federation.

Certain elements in the unit drills were of both defensive and offensive nature, which obscures the true objectives of the Russian military and political leaders. Apparently, the list of conditions and tasks performed during the exercise indicate training for specific actions in specific territories under expected conditions, including both massive offensive operations with deployment of troops and joint forces outside Russia’s borders together with quick build-up of the attack force and imposition of martial law on the homeland territory including mobilization, establishing of territorial defense and ensuring troops supply in defense operations. However, it is entirely possible that some of the tasks meant to look like defense exercises, may in fact be related to tasks other than defense. For example, actions intended to establish territorial defense in the Crimea may actually represent the Kremlin’s effort to evaluate ability to build up the internal capabilities of the peninsular force in order to reduce time required to form an attack group, should the force be required to advance from the Crimea in other directions.

The  tasks on countering illegal armed groups performed during the snap exercise are identical to those of counter-rebel and counter-guerrilla operations to be conducted on occupied territories.

The tasks performed by the Western Military District units in the north-western areas, particularly, in the Baltic region, are different from those set to the troops in the south-western areas. Most of the tasks performed by the units deployed in the Southern Military District are of offensive nature, while the units in the Western Military District mostly participated in relocation and covering tasks as well as in repelling the opposing force attacks. This is especially evident in electronic warfare (EW) exercises. For example, EW units and drone squads of the mechanized infantry formations of Southern Military District located in the Republic of Dagestan performed joint combat training on search and jamming of the enemy EW assets by means of the Leer-3 systems in the GSM-900 and GSM-1800 bands. Such systems have already been identified in the occupied Donetsk on March 29, 2016.

In their turn, communications operators of the Western Military District control brigade exercised in organizing wire, relay and radio communication systems, setting up of security and defense of field control posts and communication stations, ensuring command signals transmission under the enemy’s EW effort. Such different tasks may reflect differences in the Kremlin’s evaluation of the opposing resources and capabilities in the corresponding areas.

The priority of the south-western area is revealed in the operations of the Western Military District aviation relocation. For example, the aircraft stationed in Voronezh, Kursk and Tver regions exercised relocation to the airfields of the Southern Military District in the Krasnodar Territory, the Crimea and Rostov Oblast. Mi-8, MiI-24, Mi-35 and Mi-28N helicopters of the military airbase stationed in St. Petersburg were relocated to the operational airfields in the Krasnodar Territory. Thus, the command relocated the aviation from the north-western area. This action disproves Moscow’s rhetoric on NATO’s threat, and may be related to the fact that the most combat-capable units of the Central Military District are currently engaged in the Syrian operation(military units 69806, 63559).

The tasks performed during the snap exercise show that the theater of the potential assault operations has large waterways. Particularly, during the special tactical training exercises, the railway troops of the Eastern Military District built a 800-meter crossing over the Zeya, the largest river of the Amur basin. They prepared riverside approaches for military vehicles and built a ferry crossing. This task is significant because it was performed by the forces of the Eastern Military District whose participation in the snap exercise was rather as an exception. The final stage of the snap exercise performed on the Prudboy training range involved an assault crossing of the Don with building of a crossing of over 500 meters of water. Although both of these crossing tasks match the width of the Dnipro river (the hydrographical parameters of the Zeya and the Don are similar to those of the Dnipro), the most probable reason for these drills is a response to NATO for building a crossing over the Visla in June, 2016, during the Anaconda-2016 exercise, when units of the 75 Engineer Regiment of the British Army and the 130 engineer battalion of the Bundeswehr built a 350-meter crossing in just 35 minutes.

According to the available data, in 2016 all military bases of the Airborne Forces received new special facilities for training water landings. They exercised water landings from Mi-8 transport and combat helicopters and An-2 aircraft from the altitude of 600 to 1200 meters with water depth of at least 1.5 meters, which corresponds to the parameters of a river obstacle.

At the same time, an infantry unit of the Southern Military District stationed in Volgograd region started experimental implementation of a system of psychological conditioning of personnel and psychological support of combat training of the troops aimed at maintaining better mental stability and the ability to endure high-stress conditions. The servicemen were to jump into the water from a 3 to 5-meter tower in full gear and remain underwater using improvised means for breathing (a pipe, straw or cattail stalk) which may indicate that the exercise is intended to train special subversive reconnaissance units for water landings in the enemy’s rear.

Therefore, the analysis of the tasks set to the units during the snap exercise indicates the absolute priority of both amphibious and air landing operations.

This exercise is also marked with active involvement of logistic units at all stages.  During the snap exercise of the Russian Armed Forces, the military authorities, logistic troops and units performed the tasks of overall supply of troops at all stages of the exercise. The logistic organization system was checked at the military bases, on the advance routes and in the field. A significant point here was the check of the road control service, servicemen rations, military gear provision, ammunition and materials supply as well as the repairs of weapons and military equipment, deployment of meal stations and bath and laundry service on combined arms training areas. During the aviation relocation, the military transport aircraft relocated, among others, the ground service equipment to tactical airfields.

The logistics check also involved military financial experts who practiced switching the financial and economic services from peacetime to wartime conditions and checked the performance of the troops financial supply system in special conditions. During the snap exercise, Deputy Defense Minister of Russia, Tatiana Shevtsova, was assigned the task of checking the financial supply system of military authorities and troops in the South-Western Strategic Area in case of switching from peacetime to wartime conditions.

The exercise involved development of the basic structure of financial supply, both within the existing territorial principle and in the conditions when the tasks of cash management organization are delegated to commanders of forces and military units. The forces, units and personnel practiced switching to servicing in the system of Bank of Russia network to ensure cash provision to the troops and personnel of the Armed Forces under any conditions. This may be necessary in the event of creating a cash supply system for the Russian force in the territory of a foreign state and creating a system of military civil regional governments outside the jurisdiction of the Russian Federation but fully based on the Russian financial system. Therefore, there are indirect indicators of developing a financial system for troops and infrastructure facilities on occupied territories. In Russia, financial supply of military bases is fully supported by the Bank of Russia or the Sberbank of Russia. This means that such tasks make no sense in the territory of Russia, even under martial law.

Involvement of logistic units in the relocations of such scale is an important and the most significant indicator of preparations for offensive actions. Today, there is a joint force formed within the Southern Military District of Russia which, judging by its resources and means, as well as logistics, is capable of short-term offensive operations in the south-western area under cover of the exercises of Kavkaz-2016 scale which took place from September 5 till September 10. The tasks performed during the snap exercise indicate preparation for such operations with active air support, creation of a layered air defense system and landing of personnel and equipment in several areas.

Anatolii Baronin, the analysis has been prepared specially for InformNapalm, an active link to the original publication is obligatory for any reprint or further public use of the material. This material contains photos and video footage of snap exercise posted on the official website of the Ministry of Defence of the Russian Federation.

No Responses to “Analysis of the Snap Exercise Performed by Russian Armed Forces from August 25 till August 31, 2016”