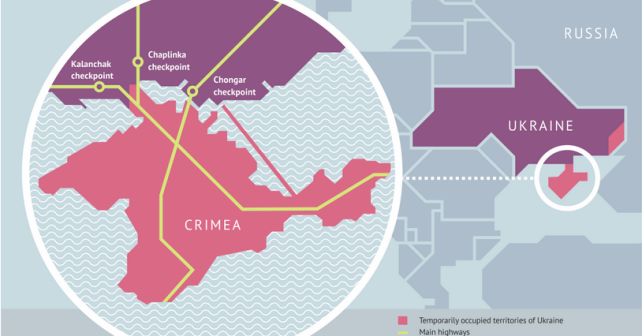 These days, the Russian bloggers and journalists are actively working to discredit Ukraine in the international community’s eyes in the context of the termless blockade of the Crimean peninsula annexed by Russia. Different methods of generalization of the facts, the shift of the focus and even the outright lies are used for achieving the goal. In this regard, InformNapalm.org together with @Infographics_ua decided to clarify the situation with the termless blockade of the Crimea.

Let us remind you that the action started at noon on September 20, 2015, at the administrative border of the Kherson Oblast and the temporarily occupied Autonomous Republic of Crimea. The action is carried out by the Ukrainian and Crimean Tatar activists. It is aimed at blocking the trade with the peninsula at ‘Chongar’, ‘Chaplinka’ and ‘Kalanchak’ checkpoints. It is planned to block the movement of trucks with food and other goods, which move towards the peninsula. Protection of the public order is provided by a special division of the Office of Ministry of Internal Affairs in the Kherson Oblast of Ukraine and by the ‘Kherson’ battalion.

This public action primarily affects the trade and transport organizations which have commercial relations with the temporarily occupied territory of Ukraine in the Crimea. This trade embargo can also impact on the variety of food and household goods in the Crimean market in the nearest future, since the transport infrastructure between the Crimea and Russia, bypassing Ukraine, is extremely limited due to geographical reasons, and it will be extremely difficult and costly for the Russian side to piece out the shortage of supplies from mainland Ukraine. This can result in significant financial losses for the Russian authorities. Many Ukrainian and Crimean Tatar public figures propose to extend the blockade also on other types of raw material supply: electricity, water and telecommunication networks. In addition, the Crimea hosts the main base of the Black Sea Fleet and a large military contingent, which must also be prevented from providing the goods from Ukraine.

Please note that the annexed Crimea was previously also under various economic sanctions the EU, US and other countries. So Ukraine, being a victim of the Russian aggression, not only can, but must use the same sanctions to impact the economy of the aggressor.

Many states have restricted or banned its companies and individuals to carry out any financial or commercial activities with the temporarily occupied territory of the Crimean peninsula. Visa and Mastercard, as well as various international electronic payment systems do not work there. Residence in the annexed Crimea currently does not allow foreign currency payments via SWIFT or obtain a Schengen and many other visas.

Taking into account that the ‘hybrid’ war is waged against Ukraine, and Russia sponsors the terror in Donbas, the Ukrainian side could rightly cease all economic relations with the occupied territories, which would be an additional step in the application of its own sanctions against the aggressor. Furthermore, according to the IV Geneva Convention, all the commitments to ensure the lives of citizens in the occupied territories are assigned to the occupier.