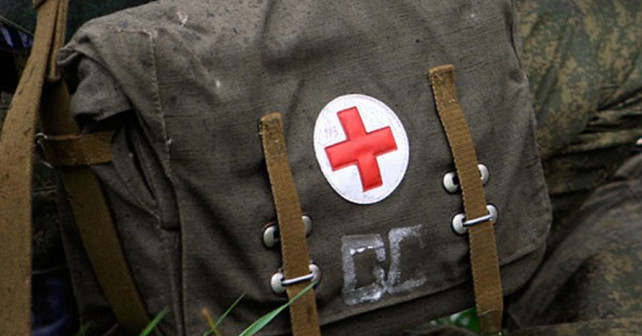 There are real heroes among those who are discharged and going home now. They are strong personalities. They are good professionals. They are doctors, drivers, and medical instructors.

During 11 months in the Anti-Terrorist Operation, he has got more experience than during 10 years of medical practice. It happened so, that after graduating from the Bogomolets National Medical University and internship, second lieutenant of reserve Oleh Shubin had to improve his skills on the front.

“I do not remember exactly, probably on March 28th or 29th they brought me a notification from the military commissariat. I came there the next day. They took my personal information and told me to wait for the call. That was on Friday. On Monday, they called me and said it was time to serve my homeland.”

Only the first week in the medical squadron of the 95th Airmobile Brigade reminded the civil medical practice. Then, on April 6, the unit was transferred from the home base to the testing site Shyroky Lan, then to Kherson Oblast, and later to Donbas. Until the withdrawal from Karachun, Oleh Shubin had a call sign “Three Three”, but then the colleagues started calling him Shaman. They say he was doing miracles in combat situations.

“Near Lysychansk, a young guy was wounded in the chest. He had a penetrating injury and pneumothorax. Right before loading him in a medical vehicle for evacuation, his condition was getting worse rapidly. So, I had to do drainage of the chest, in an open field, lying under the vehicle.”

In such hot spots as Dobropillia, Karachun, Kryva Luka, Stepanivka, Donetsk airport, he had to save lives of soldiers not only from his own brigade, but others as well. Once, while moving towards Savur Mohyla, he helped a wounded mortar gunner, who was lying on the road.

“We were riding in a medical Hammer there. We stopped and provided necessary help. A firing was going on all the time. Under the fire, we loaded the wounded in the Hammer and evacuated them. It was the brightest moment, which I cannot forget.”

Now he is at home with his wife Snezhana and 4-year old son Vladyslav. He hopes that peace will come to Ukraine with the spring and only the camouflage uniform in his closet will remind him about horrors of war.

One Response to “Doctor Shaman. Eleven Months at the 95th Airmobile Brigade”