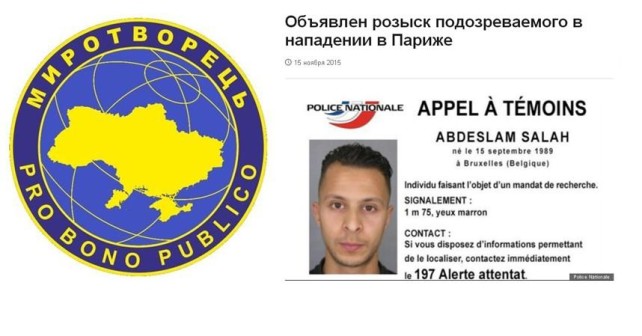 ‘Myrotvorets’ [Peacekeeper] Center of Studies of Elements of Offence Against the National Security of Ukraine, Peace, Human Security and International Legal Order put Abdeslam Salah on the wanted list. Salah is suspected in taking part in terrorist strike in Paris on November 13, 2015.

We’d like to remind you that after finding the car supposedly used by the terrorist for escape, the police concluded that Abdeslam Salah may be the only attacker who survived. According to some reports, at least one of the attackers was his brother. The investigation assumes that strike on Paris was prepared in suburbs of Brussels, where at least one of the terrorists lived. The investigation representatives suppose that this crime is of international scale. The Belgian prosecutor’s office conducts its own investigation of this crime. Experts say that the number of Belgian citizens which have joined ISIS is the largest (percentage wise) in Europe. The French investigators ask to share with them any information about born in Belgium Abdeslam Salah and his possible location. The police warns that Salah may be armed and dangerous and nobody should approach him.

This article was prepared in order to share information about the wanted terrorist. This kind of help in the fight against the terrorism is more efficient than just condolences. The terrorists should know that they cannot hide, that they will be recognized wherever they are – in Ukraine, Georgia, Russia or any other countries, where readers of our articles live.