Echo of Ilovaisk: Another 6th Brigade’s Tank Crewman Is Identified 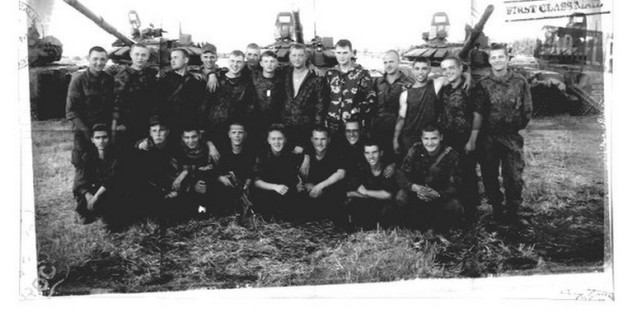 Not so long ago we conducted an OSINT investigation which resulted in identification of the Russian tanks and servicemen of the 6th armored brigade (military unit No. 54096, Western Military District, Nizhny Novgorod, Russia) which went through the ‘Ukrainian assignment’ (check out “‘Tank Biathlon 2014’ of the Russia’s 6th Tank Brigade in Donbas”).

The new story is based on the video clip by a journalist of All Ukrainian Information-Legal newspaper ‘Road Control’ – ‘Russian soldiers who have never been to Donbas’ (in Russian). This journalist was an eyewitness of capturing the Russian T-72B3 tank by the Ukrainian army and moving it from the battlefield to the village of Mnohopillia (the original video is available only for registered users, so the copy is uploaded to our channel).

As the result of this OSINT investigation we disclosed and identified another Russian ‘tank biathlon’ participant – Aleksei Berezin, whose documents were found in an abandoned tank near Ilovaisk. 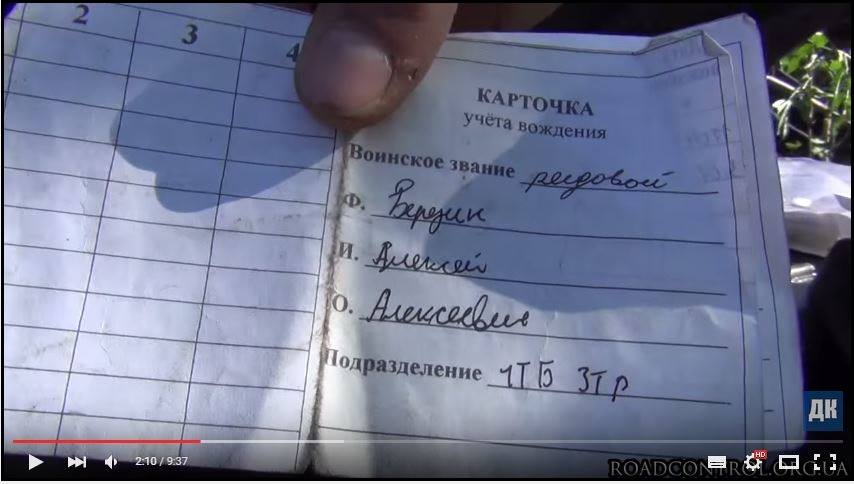 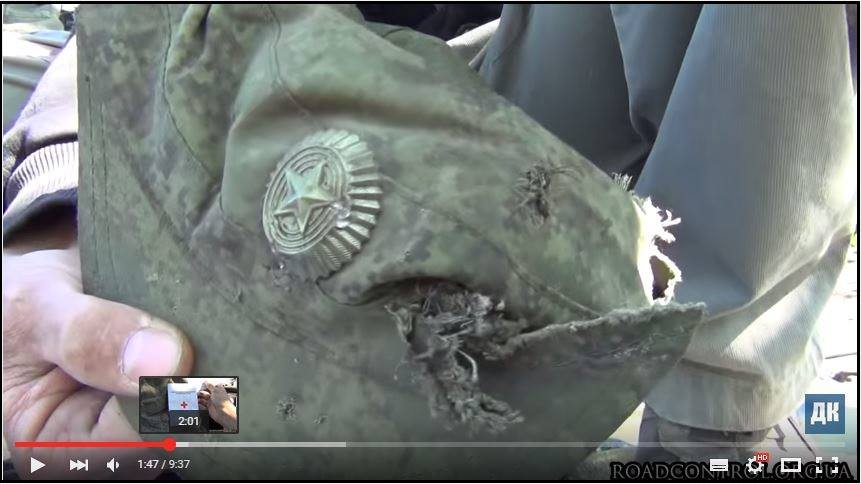 It did not take long to find Aleksei Berezin’s VK profile (archive), since he appeared to be a friend of the previously disclosed contract serviceman Vadim Romanukh who served in the same military unit No. 54096 and whose photo album lacked several pictures from his ‘Ukrainian trip’ after our publication in August. The contact list remained untouched and that allowed us to identify Berezin (‘good’ job, FSB ‘erasers’, thank you!). 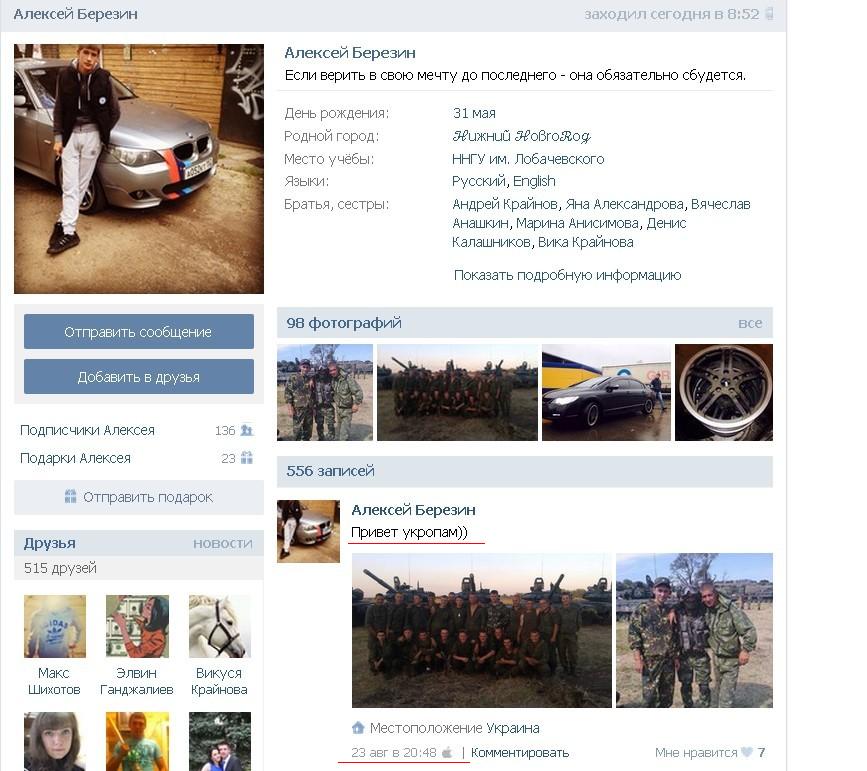 Aleksei Berezin’s profile is nothing special, besides the fact that the boy seeks glory. His photo album contains a set of recognizable group photos of the 6th brigade tank crewmen during their assignment to Ukraine in 2014. The same photos can be seen in the profiles of his brothers-in-arms which we have seen before. One of this pictures was uploaded on August 23, 2014, and was cynically commented: “Hi to ukrops))”.

Let’s come back to our video analysis. As it is known, the Ukrainian forces captured a modernized Russian T-72B3 tank in a fight near Ilovaisk on August 26, 2014. It was reported in detail in the ‘Censor.net’ article from August 27, 2015 – COLONEL KOVALSKYI: “WE CAPTURED RUSSIAN Т-72B3 UNEXPECTEDLY FOR OURSELVES – FOR MOST OF US IT WAS THE FIRST ENGAGEMENT”. In particular, the captured tank was the newest T-72B3 modification, produced in 2013 and fitted with the French and Belorussian equipment. Colonel Mikhail Kovalsky notes the following: “At around noon Aug. 26 we saw an enemy’s convoy advancing us directly. It was headed by a tank followed by six airborne combat vehicles. I gave an order to the IFV; it showed up and opened fire at a distance of approx. 400 meters. The tank stopped, and its turret caught fire. The airborne combat vehicles made a landing and, having seen that the tank stopped, turned around and started to retreat. Infantry also started to retreat along the forest. One of the airborne combat vehicles was hit by a round, but managed to retreat. No other losses were inflicted to the enemy… The tank was to be blown up, but I examined it and saw it was totally operable, its damages being cosmetic. Obviously, a tank driver was wounded for there were blood stains on the turret. All those wounded were taken away by the enemy. When mopping up, we found an abandoned operable sniper rifle made in Russia. The tank was Russian as well – we found all documents inside…”

This information and the provided photo and video materials are enough to link everything together. As mentioned before, the abandoned driving document of the private A. Berezin proves his belonging to the 3rd tank company of the 1st tank battalion (the 6th armored brigade). A photo from Romanukh’s album shows us the mark of the 3rd tank company which is placed on the ammunition box of the tank’s machine gun; and the familiar white identification sign is placed over the painted out hull number. 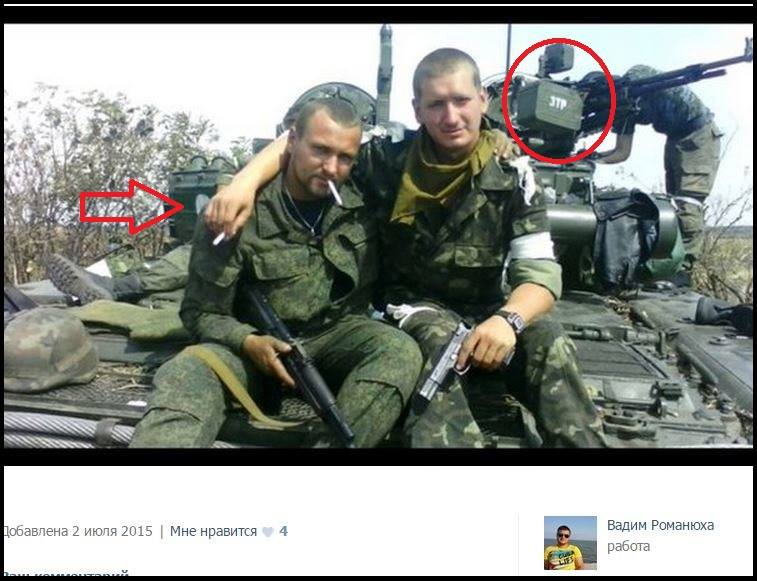 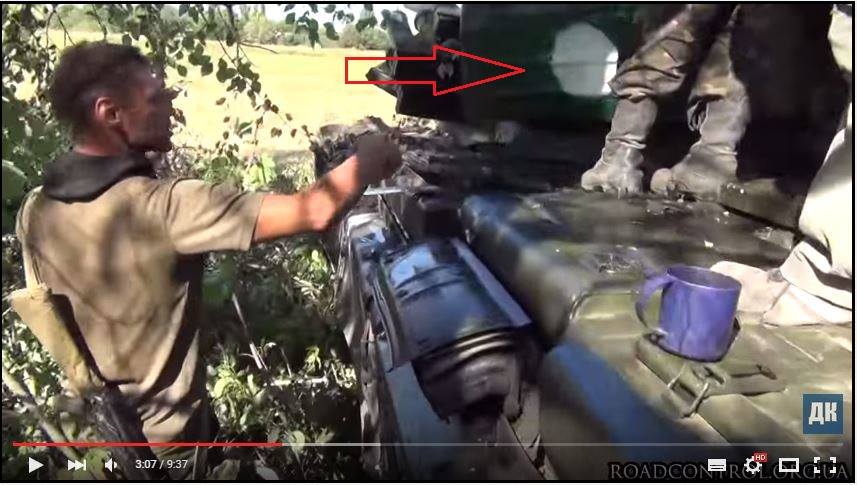 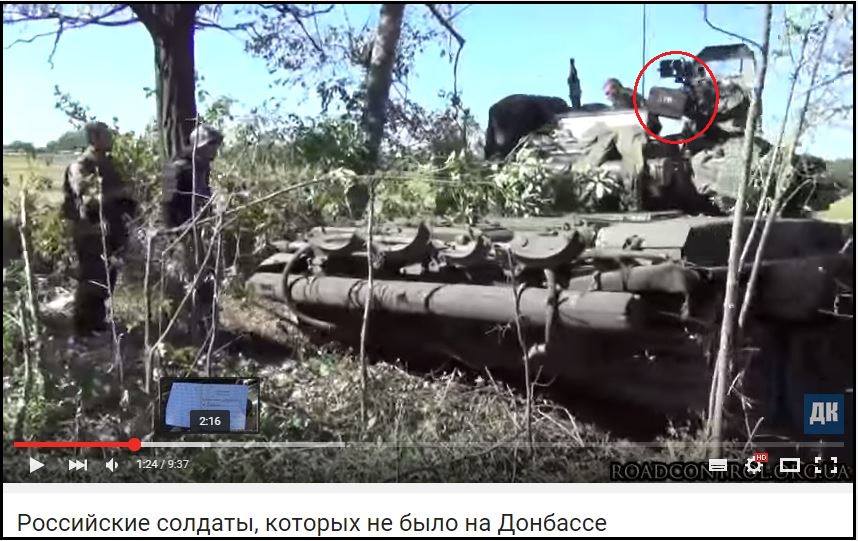 Here are other stories about the 6th separate armored brigade:
– Another lies of Russian propaganda – T-72D3(BЗ) tanks (in Russian).

– The Russian servicemen of the 6th armored brigade wear the Russian Inner troops uniform (in Russian).

– Where the Russian contract servicemen from Mulino are lost (in Russian).

– Internet users have identified the Russian soldiers captured near Ilovaisk (in Russian).

– A Unit of the 6th Tank Brigade Transferred to Rostov Oblast.

One Response to “Echo of Ilovaisk: Another 6th Brigade’s Tank Crewman Is Identified”