Facts Of the Russian Invasion: Following the Route of the August Battalion 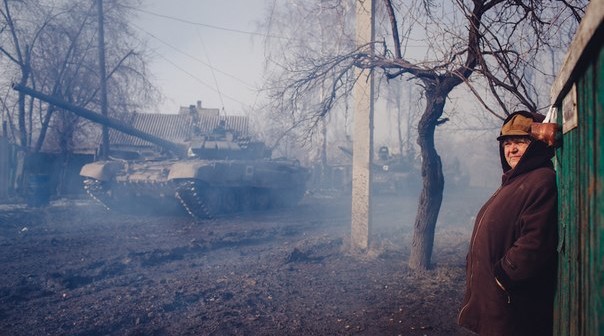 One of our readers has left and interesting comment under our previous material called “How Many Tanks Does the August Terrorist Battalion Have?”. He also added a web link to the interview of the surviving mechanic of the August terrorist unit, published on the website of Russian TV channel Dozhd  http://tvrain.ru/articles/ja_tochno_znaju_chto_eto_byli_rossijskie_tanki_kak_zhitel_adygei_jakoby_zaderzhannyj_politsiej_v_rostove_okazalsja_v_rjadah_batalona_lnr-381327/ :

“When they were being formed, they had 9 tanks. Then they got 27 (this information comes from private messages of the battalion personnel). The whole battalion was destroyed on January 25th while moving into position, all crewmembers were killed, only one driver survived (this information comes from the personnel of the terrorist unit that investigated the place, where the battalion was destroyed), one driver was caught by Ukrainian Security Service (it’s not clear, whether that was the same person or a different one). The commander of August was punished for the failed advance and the losses in personnel and equipment with a bullet into his leg…

We chose this message because it describes yet another attempt to hide the real scale of the Russian aggression against Ukraine, it also allows us to take a good look at the actual procedure of heavy weapons withdrawal by the militants and their Russian sponsors.

We begin with the evidence that was published on February 17, called “A convoy of tanks moves to the Debaltseve encirclement”

Here we can see a convoy of armor, which includes 10 T-72 tanks (two of them are T-72BM), 7 Ural and KAMAZ military trucks, 4 ICVs, 1 MT-LB armored vehicle and 4 military fuel transporters. All vehicles have the distinct mark, a white square, already familiar to us from the previous article about the August battalion. The presence of T-72BM tanks points directly at the Russian involvement in sponsoring the conflict in Ukraine.

Our next piece of evidence is from Debaltsevo, the video made by the militants called Prapor and Khrustalik

Date: 02/14/2015. It doesn’t match the previous video exactly, but that is not critical. The first video could be shot a few days before it was published on the Internet. Something else is important here: we can see tanks with white squares on the streets of a Ukrainian village, with two of them being T-72BM. So we have good reasons to assume that we see the same tank group. However, this time we see T-64 tanks together with T-72s, which are clearly separated from T-72s and do not have August’s marks.

It is possible that those were that same destroyed August tanks, which the captured Russian driver was talking about. A very significant thing happens on the 35th second of the video: we can clearly hear “Zdravia zhelayu” (a Russian military greeting), and then we see this person wearing a marine beret. 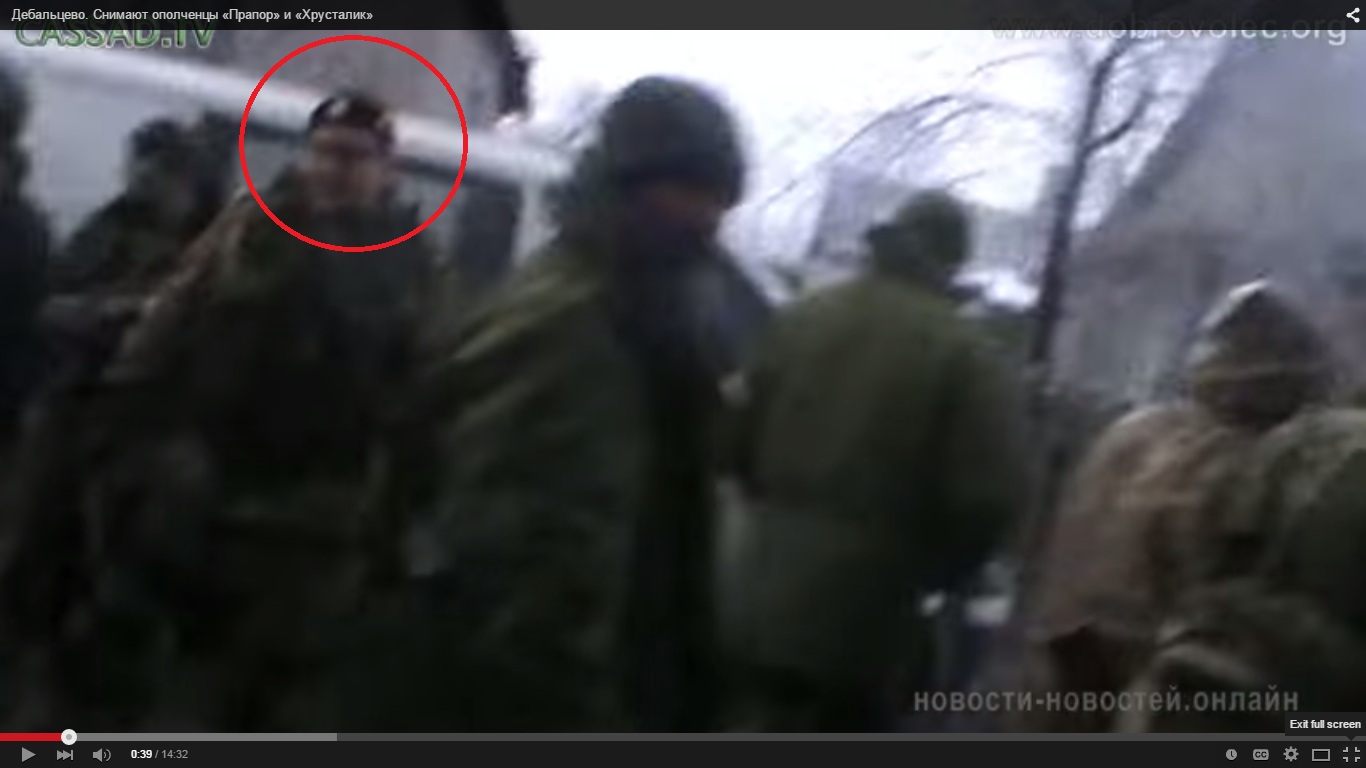 This video stops there, and the actual meeting is not recorded. It is obvious that civilian volunteers from Russia and Ukraine, who, according to the statements from Moscow, constitute the militant troops, do not greet each other this way and do not hide cameras, when meeting each other.

Another document about the August tank group is the video called “Gorlovka the withdrawal of troops. 21.02.2015”

14 tanks (two of them are T-72BM), 7 ICVs, 2 MT-LB armored vehicles and 3 trucks. As we see, the quantity of vehicles in the convoy has changed since the previous video. So we can conclude that weapons were deployed to the area in several convoys, and only some of them were filmed. That’s why the actual number of troops fighting for Debaltseve could significantly exceed the size of this convoy.

By the way, Russia continues its attempts to hide the presence of its troops in Donbas. On February 22 the same video was published, but this time it had another name, “A large convoy of militia tanks going to the front Yenakijeve – Google Maps 22.02 War in Ukraine”

This attempt happens to be fruitless, to say the least, since the person shooting this video clearly states that this is a weapons withdrawal from the combat area, and not fresh troops heading into combat. Besides, the active phase of the clashes had already been in the past at the moment when the video was shot, that’s why the weapons withdrawal from the combat area can be the only explanation. But there is one strange thing here. The official video of weapons withdrawal by the militants appeared on February 24. Obviously, the tanks with white squares are not seen in these official videos. So, who does August belong to? 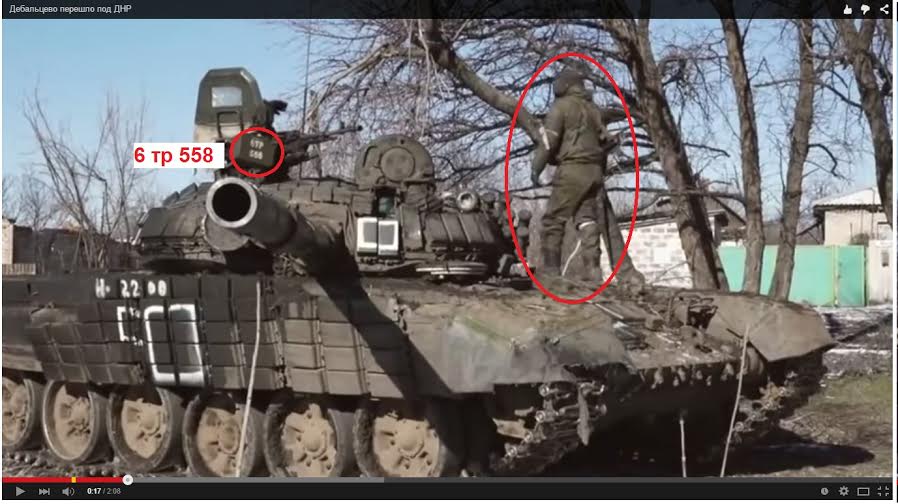 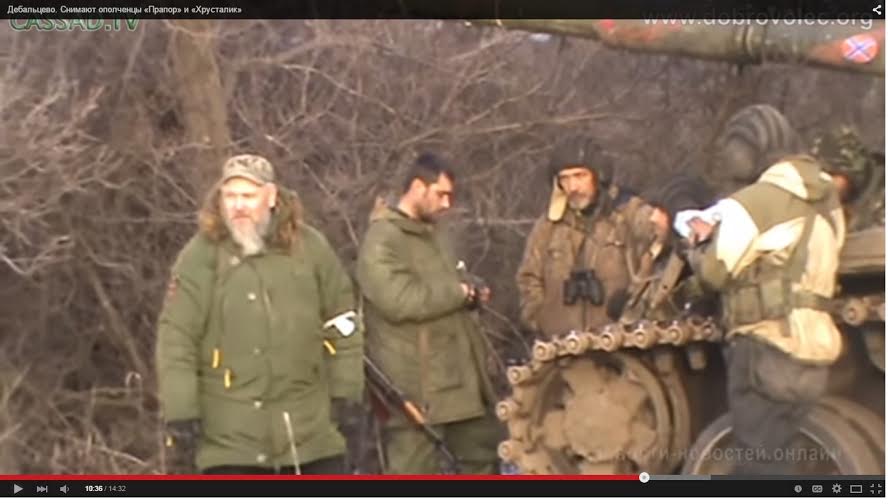 Besides the already known markings that show the Russian origin of the armor, we can see another detail in this video. The uniforms of the crews of the tanks with white squares are radically different from the “traditional” uniforms of  the militants. And if the use of field uniforms of the Russian Army by the separatists could be explained by easy access to it through military stores, this is not a satisfactory explanation, when it comes to the Russian tank crew uniform called Cowboy and other similar types, because you can not find brand new tank helmets and special tank crew coveralls in a regular store. Also, we can see the number 558 on this tank and an inscription saying “6ТР”, which can be understood as “6th tank company”. In the modern Russian Army, six tank companies can only be found in a large tank unit, for example, a tank brigade. This brings us back to the interview of a wounded Buryat tank crewman given to the Russian newspaper Novaya Gazeta http://www.novayagazeta.ru/society/67490.html. In it, he says that he served in the 2nd battalion of the 5th Separate Tank Brigade. This brigade does have the 6th tank company, and that company belongs to the 2nd battalion.

Therefore, based on various public videos, we were able to establish the participation of  Russian Army troops, possibly belonging to the 5th Tank Brigade, including a tank company or possibly an even larger unit, in the fighting near Debaltsevo. In order to hide their presence, this unit used the white square mark painted on the tanks, pretending to be a part of the August militia battalion. And, as you could see, this unit was not destroyed; it was withdrawn from Debaltsevo three days before the official troop withdrawal began. This was done in order to eliminate the possibility of Russian troops being present in the propaganda videos depicting the withdrawal.

No Responses to “Facts Of the Russian Invasion: Following the Route of the August Battalion”